Showing posts from October, 2010
Show all

Cookbook #44: The Essential Cuisines of Mexico 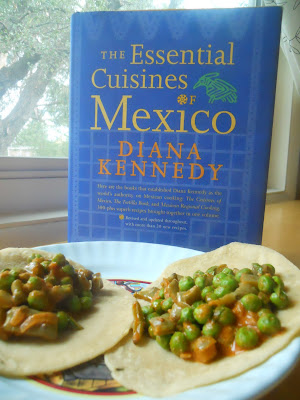 Adapted from Cookbook #44:  The Essential Cuisines of Mexico (2000) Recipe:  Legumbres en Pipian Oaxaqueno   (Vegetables in Oaxacan Pumpkin Seed Sauce) Apparently the season for nopales is spring.  I didn't know.  Perhaps the requisite peas in the recipe should have been a red flag, but I am a Midwestern gringo, and I have little experience eating nopales.  And once again, I have been reminded not to be a doubter.  Our friends to the south have got something going on.  These little cactus paddles are indeed something behold.  And after beholding them, you should ingest them. A native Brit, Diana Kennedy is a master of Mexican cooking. In fact, she is often referred to as the Julia  Child of Mexican cooking, but such a moniker seems unfair to me.  Why is Julia not the Diana Kennedy of French cuisine?  Ah, well.  Kennedy went to Mexico in 1957, and in the ensuing 50 years, she has watched and learned from villagers, urbanites, indigenous peoples and Mestizos.  I must ad
1 comment
Read more 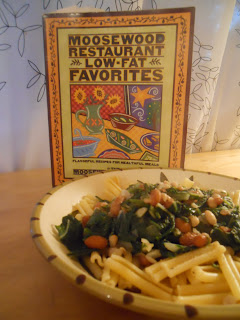 Adapted from Cookbook #43:  Moosewood Restaurant Low-Fat Favorites (1996) Recipe:  Pasta with Beans and Greens Do you have bushels of kale, chard, turnip greens, beet greens, arugula, endive?  Do you not know what to do with all of it because each week your CSA box comes chock full of leafy green vegetables that you know are good for you, but you have just plain run out of recipes for them?  Do you walk around the farmers market in the autumn bemoaning the loss of tomatoes and the upswing of all those healthy greens?  Well, do not fear.  Moosewood to the rescue.  This recipe will take care of a full pound of them. This cookbook is one in a long line of publications (11 so far) from the Moosewood Restaurant .  A 19-person collective working together since 1973 (with some rotation of staff), the restaurant is situated in downtown Ithaca, New York.  It's most famous member was Mollie Katzen , who has since left the collective to pen her own cookboo
Post a Comment
Read more 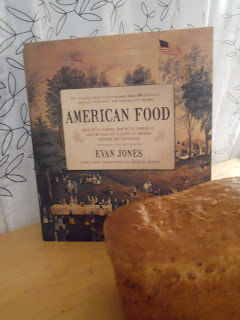 Adapted from Cookbook #42: American Food Recipe:  Good Earth Bread Bread.  Bread.  Bread.  Slowly, surely, steadily, but not quite entirely, I am becoming a much better baker.  It has just taken some patience and confidence.  And much help from the husband, who is quite a good baker.  Mostly because he has patience and confidence. It took a long time for me to figure out just the right temperature of the liquid (water usually, but milk in this case) not to scald the yeast and yet allow the yeast enough heat to "wake up" (that temperature is body temperature, it turns out).  It took a long time for me to figure out just how much kneading was needed to break down the bonds in a bread (more than you think, but less than would break a sweat).  It took a long time to be confident that the bread had risen enough (yep, that much right there is enough).  But here I am, baking bread. Now, Good Earth bread is not for everyone.  It is heavy in, well, earnestness.  Goo
Post a Comment
Read more Adapted from Cookbook #41:  Charlie Trotter Cooks at Home Recipe:  Stuffed Beef Tenderloin with Whole-Wheat Couscous and Black Olive Vinaigrette Four years ago, the husband and I got married.  This year, to celebrate we're heading up the California coast to a little town called Gualala for some relaxation.  However, because of availability of the lodge we're staying, we have to wait just one more week before we can (hopefully) get fogged in at some local bar watching baseball. In the mean time, I made beef. Admittedly, I always confuse Charlie Trotter with Thomas Keller.  The double letters followed by the -er, and I cannot keep the men straight.  Both have masterminded some great restaurants, and both geographically speak to me:  Keller with his California cuisine, Trotter with his Chicago palate.  As a Midwestern transplant, I appreciate a Midwesterner's point of view.  And while I have never actually been to his restaurant , I happily cook fr
Post a Comment
Read more

Cookbook #40.5: The Country Cooking of Ireland 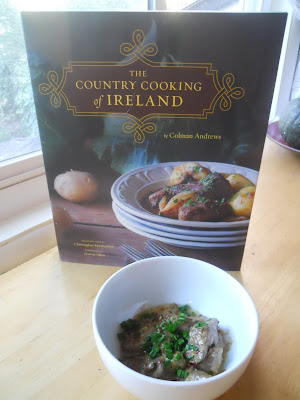 Adapted from Cookbook #40.5:  The Country Cooking of Ireland (2009) Recipe: Liver in Whiskey Cream Sauce Okay, I said I would make this.  The whole point of beginning this blog was to get me out of my comfort zone and to use (really use!) the cookbooks that I own.  It was meant to inspire me to cook again, to try something new. When I bought this cookbook, I never knew it would lead to this:  Liver.  Onions.  Whiskey.  This cookbook proudly has an entire chapter devoted to offal, the subtitle of which is "The Irish Touch."  Isn't that fabulous? The book admits that many Americans do not eat offal, in part because we no longer have to eat it (McDonald's has made short order of that).  Thus we discard the tongue, the liver, the kidneys, or we grind them up into sausages so we don't have to confront what they truly are.  This chapter suggests we might do well to change our ways.  We're missing out on the glories of Chicke
Post a Comment
Read more

Cookbook #40: The Country Cooking of Ireland 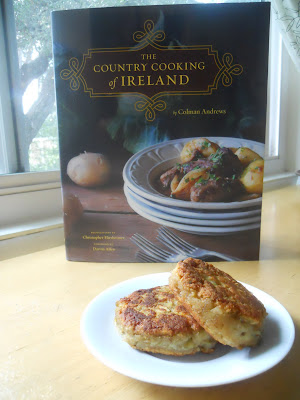 Adapted from Cookbook #40:  The Country Cooking of Ireland (2009) Recipe:  Boxty I am cheating right now.  I admit it.  I am offering you not one but two recipes from this cookbook.  I am supposed to cook liver from page 210.  And I will.  But I have to soak it overnight in milk (?), and in the meantime, I decided to make the next entry in the cookbook--Boxty.  Don't worry.  The liver is next.  And I will have a lot to say about it. In a chapter devoted entirely to potatoes, the opening entry is on boxty.  And it turns out, my boxty ensures that my marriage is no longer a sham.  For you see:  "Boxty on the griddle,/ Boxty in the pan,/ If you can't make boxty,/  You'll never get a man."  Well!  Thankfully, I make a mean boxty. Eaten in the north of Ireland and in Northern Ireland--Fermanagh, Derry, Tyrone, Cavan, Mayo, Sligo, Donegal--boxty is similar to a thick pancake composed of mashed potatoes, shredded potatoes, flour, and baking soda.  Boxt
1 comment
Read more
More posts