And here's how the Wellness Cleanse is going:

Ground Zero:
The hardest part was leafing through all of the cookbooks to find vegan, gluten-free, sugar-free recipes (alcohol and caffeine free recipes are pretty easy to come by).  I had stacks of cookbooks surrounding me, and I did make a list of 20 recipes or meals I could make. (The difference for me between a recipe and a meal is that for a recipe I needed a book (see the paella) but a meal I could just make myself (see Aloo Gobhi)).  Let the cooking begin.

The trip to Target to replace our blender (which had recently cracked) so I can make smoothies and then to the Berkeley Bowl.  What a great grocery store that place is.  Brown rice flour?  Chia seeds?  Goji berries?  Raw cacao?  All check.

I avoided all vegan substitutes, save the butter, and avoided the soy products as well.  I know, I know; soy can be really good for protein, but I have done a little reading on soy, and it has a bit of reputation for being problematic but also really good for you.  Agh.  Controversy.  So since I am doing this cleanse for only three weeks, I am limiting soy in general but am willing to eat it here and there (see Spring Rolls, Day 2).

I came home with mountains of food.  I am little worried I won't be able to eat all of it this week.

Day 1:
Breakfast:  Oatmeal with golden raisins and agave (which apparently is okay to have, thank god)
Lunch:  Beet, Apple, and Beet Green Smoothie (with cranberry juice and 1/2 an avocado)
Dinner:  Aloo Gobhi (Potatoes and Cauliflower in a spiced sauce) and Sweet Potato Chips (baked in the oven)
Workout:  90 minutes yoga

Day 2:
Breakfast: Oatmeal with golden raisins, almonds, and agave.  Decaffeinated Chai Tea with Almond Milk.
Lunch: Shiitake and Tofu Spring Rolls, Curried Sweet Potato Soup, and Good Start Juice (celery, kale, broccoli, ginger, and apple) (all at Plant; I love living in an area with a restaurant that puts on the menu what is vegan and what is gluten free, but I am not read to commit to Cafe Gratitude)
Snacks:  Orange, grapes, a handful of Mary's Gone Crackers Herb Crackers, and two tablespoons of almond butter.
Dinner:  A couple of bites of Coconut and Red Lentil Soup.  Mostly didn't feel like eating.  See observations.
Workout:  60 minutes bootcamp 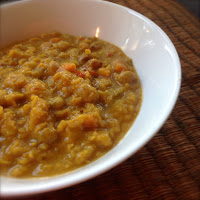 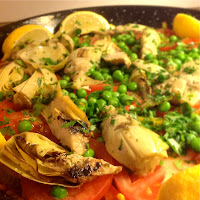 Day 6:
Breakfast:  Everything but the kitchen sink fruit smoothie (in other words, leftovers from the week:  grapes, mango, blood orange, fennel, spinach, mint, and chia seeds)
Lunch:  More leftover paella.  I wasn't kidding when I said it made a lot.
Snacks:
Dinner: A platter of morsels and sauces:  Carrots and Hummus, Popcorn, Blueberries, Hearts of Palm, Artichoke Hearts, and Date-Cashew-Chocolate Balls (minus the sugar).  Sparkling water with ginger juice and mint.
Workout: None.  I wanted to go to yoga, but then there were the Oscars tearing me away from my regularly-scheduled 90 minutes of flow. 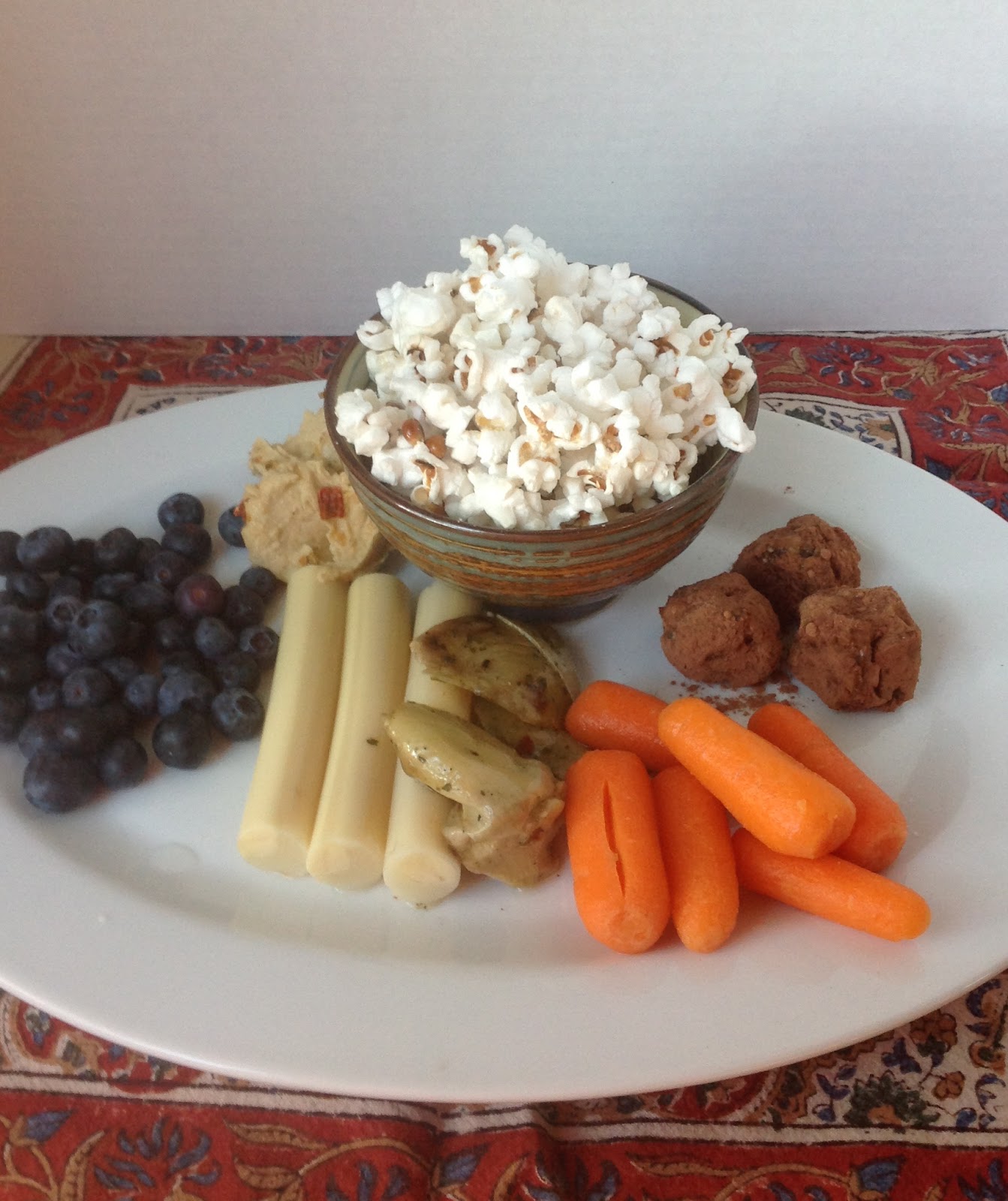 Email ThisBlogThis!Share to TwitterShare to FacebookShare to Pinterest
Labels: Cleanse

Oh, it's true:  I love this cookbook:  Plenty.  First of all, what a great name for a cookbook, and vegetarian one at that.  Such a sense of satisfaction right from the start.  Second, it came my way via a dear friend who knows my cookbook habit, so it has a special place in my heart.  Third, it is the source of the amazing eggplant noodle dish I made this summer--that dish alone made it worth its weight, in part for its sheer deliciousness and in part for its sheer ability to provide something wonderful for people who had become dear to me quite quickly.  My, what a cookbook it is.

Yotam Ottolenghi, our chef and cookbook author, is an Israeli-born chef who has a little deli (actually four of them) in the heart(s) of London; one of them also doubles as a sit-down restaurant that has been earning rave reviews.  While Ottolenghi himself is not a vegetarian, he knows how to make great vegetarian dishes.  If you're a vegetarian and you do not yet own this cookbook, please just click on over to Amazon and purchase it.  I'll wait for you because I am patient like that. 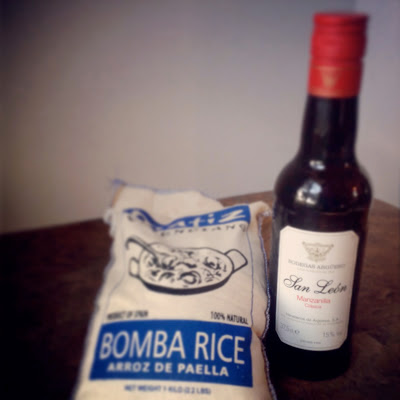 Okay, good, now that you own this cookbook, let me give you a great recipe for you while you wait for it to arrive on your doorstep.  This vegetarian version of paella gives the eggplant noodle dish a run for its money (but because of the necessity of acquiring paella rice (which is quite dear), it certainly also demands more of your money).

Paella--vegetarian, seafood, snail-based, or just plain meat-based--is so darned good.  As the dish of Valencia, people get touchy on what makes proper paella, and some may say that this version is, indeed, not true paella  for it doesn't have the requisite meats and/or seafood (which could include anything from chicken, rabbit, duck, snails, mussels, shrimp, sausage).  However, let the purists be, let them scoff as they must, because this paella is wonderful.  And I give you full liberty to tweak and add; I sure did (Ottolenghi used a yellow pepper and a red pepper; he also used cherry tomatoes, and I had regular).  (I made my changes below.) 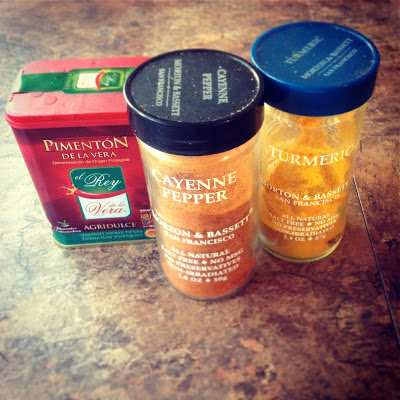 Be sure to pick up smoked paprika, and don't, no matter how much you might want to save some pennies by substituting turmeric for the saffron, skimp on the saffron (although the recipe also calls for turmeric).  Those two flavors--smoked paprika and saffron--are the flavors of paella.  Rich, slightly bitter, slightly sweet, slightly smoky, definitely complex.*

*Click here to read my favorite poem ever about saffron from a wonderful poet, Craig Arnold.

But the best part about paella is the rice at the bottom of the pan, called socarrat in Spain. This part of the paella gets a little burnt and a little crispy and a lot fantastic.  It is the stuff of gods, and for that reason Ottolenghi cautions you not to disturb the rice too much.  Take his word for it, and you will be deeply rewarded. 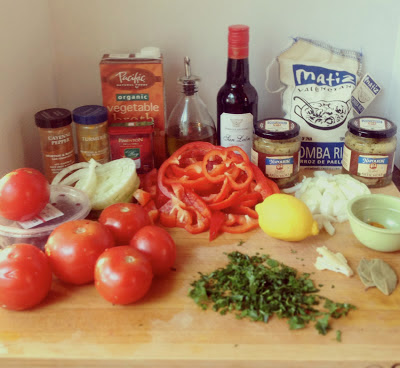 Finally, a word about one of my favorite shops in Berkeley (although it originated in Seattle and has locations in Santa Fe and Mill Valley), The Spanish Table.  This little place has bookshelf after bookshelf of Spanish cookbooks, Spanish novels and poetry, and Spanish travel books.  In addition to a rich selection of wines (seriously, the entire back of the store is devoted to wines and paella pans), they offer a wide variety of cookware and Spanish foods (including the smoked paprika and the grilled artichoke hearts in my dish).

Bonus:  They also sell haunted pirate temporary tattoos, which I did not pick up on this visit.  A true shame.  Next time, people.  Next time. 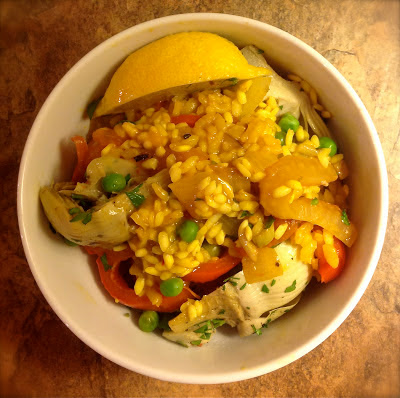 In the mean time, enjoy this fabulous dish, and ignore the fact that Ottolenghi says that this dish will feed two.  You'd have to be pretty hungry for it to feed two.  So far, we think it will feed four, and there seems to be one serving left.

Instructions:
1. Heat up the olive oil in a large shallow skillet, and gently fry the onion for 5 minutes. Add the peppers and fennel and continue to fry on a medium heat for about 6 minutes, or until soft and golden. Add the garlic and cook for 1 further minute.

2. Add the bay leaves, paprika, turmeric and cayenne to the vegetables and stir well. Then add the rice and stir thoroughly for 2 minutes before adding the sherry and saffron. Boil down for 1 minute, then add the stock and teaspoon salt. Reduce the heat to the minimum and simmer very gently for about 30 minutes, or until most of the liquid has been absorbed by the rice. Do not cover the pan and don't stir the rice during the cooking.

3. Remove the paella pan from the heat. Taste and add more salt if needed but without stirring the rice and vegetables much. Scatter the tomatoes, artichokes and beans or peas over the rice and cover the pan tightly with foil. Leave to rest for 15 minutes. Take off the foil. Scatter the olives on top of the paella and sprinkle with parsley. Serve with wedges of lemon.


*I went ahead and used the sherry, even though my current diet says no alcohol.  The alcohol cooks out.  Or so I told myself.
**I forgot the olives.  All was still okay with the world.  But I bet they would have been good...