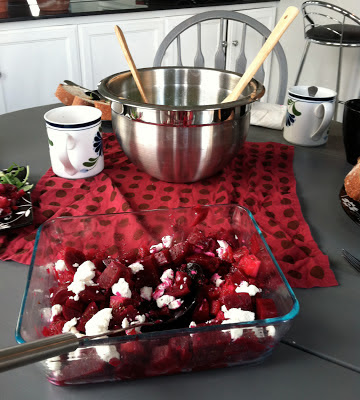 How did I spend my January, you may wonder (or maybe not, but let's assume you have, given that I have been away from this here blog)?  I spent, at least the first part of it, cooking for friends.  It's one of the ways I know to do something substantial for those I care about.  From salted ice cream for a friend who is facing some pretty big challenges to beet salad for two friends whom I adore but see not often enough, I cook.

I met these two women ten years ago, and we started doing these brunches with one another.  It almost sounds like a "thing," but in reality we do them about once a year.  But when we do, there is something kind of special; it's as if no time has passed.  Sure, I see each of them individually, and they see each other, but there is something different about the three of us in a room.  There is much laughing, often some crying, but mostly a good deal of talking and listening to one another.  We have shared career foundations, but one has branched out and away.  We all live in different areas--one on the peninsula, one in the city, and me here in the East Bay.  The past ten years have seen major changes (a divorce, a marriage, and two children), but something lovely has developed as well: a true friendship, which I appreciate so dearly.  Despite our differences--one is gluten free, the other loves bread, especially if it comes from Acme--over the last ten years, we have spent some lovely weekend mornings together, the three of us.  I am already looking forward to next year's. 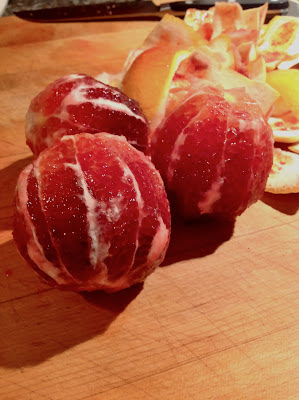 This past brunch included the most amazing Coconut and Red Lentil Soup (made by one of my dear friends and which I just made and will post soon, but in the mean time, feel free to get a headstart here), and a satisfying salad (made by the other dear friend who stands by her own salad-making rules and I can see why:  one leafy green, one fruit, one nut, and one cheese).  My contribution was this little beet and blood orange salad.

It's a surprise for most people. It looks like just a beet salad, but then, sweet glorious citrus in the dead of winter, there's a burst of acid and sweet in the blood orange.  A mix of beets (chioggia, golden, and red) would be nice, but boil the beets separately and wait to mix the salad until the last minute so that the red beets don't bleed all over the others.  You might also prefer to roast your beets.  I used goat cheese, but you could just as well use feta.  I also imagine that tossing in some rosemary, dill, mint or even just that workhorse parsley at the end would not only add a little color but some great flavor.

May you have a lovely morning for which to make this salad.  I know I certainly enjoyed mine. 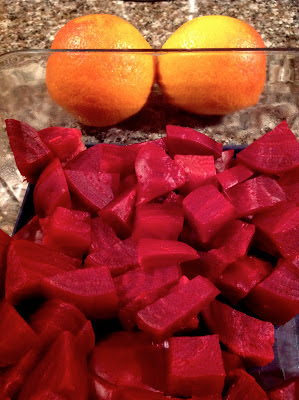 Instructions:
1.  Trim off the beet tops, leaving 1 inch of stem and the root end intact.  Wash them and put them in a large pot of boiling water.  Boil until the beets are tender when you insert a knife in the middle (about 30-40 minutes).  Drain the water from the beets.  Let the beets cool until you can handle them, then slip the skins from the beets.  Cut the beets into wedges.  Sprinkle with salt and pepper and 1 tablespoon vinegar and let stand for 10 minutes.

2.  Cut the tops and bottoms off of 4 blood oranges.  Cut away strips of the peel end to end, removing the peel all the way down to the flesh.  Cut the oranges into wedges.  Set aside.

3.  Make a vinaigrette by squeezing the juice from the remaining two oranges.  Add to a bowl with 1 teaspoon vinegar.  Season with salt and pepper.  Whisk in 1/4 cup olive oil.  Taste and adjust vinegar, oil, and salt and pepper as needed.

4.  When ready to serve, layer the beets and oranges.  Spoon the vinaigrette over top.  Sprinkle with goat cheese.  (Avoid mixing as much as possible to reduce the bleeding of the red beets.)
Beets Cheese Oranges