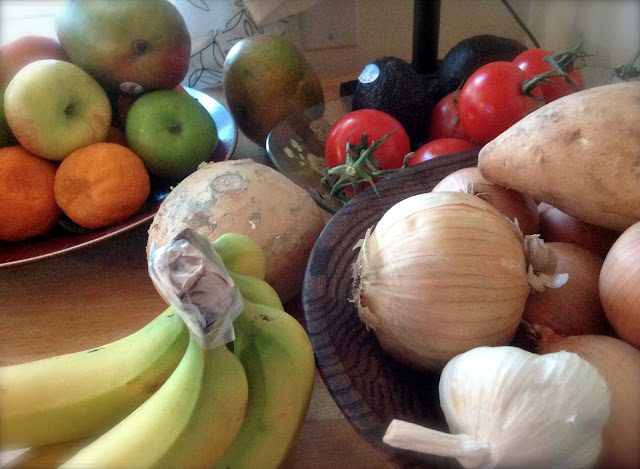 So, I decided to do something crazy, or at least crazy for me.  I decided to try the 21-Day Quantum Wellness Cleanse.

I had been eating well in this new year, but about two weeks ago, I just settled into some not so great eating habits.  The words "nachos" and "morning buns" come to mind (although not at the same time).  I blame the Superbowl, stress, laziness, and just general lack of mindfulness about what I was eating.  Plus, I wasn't really feeling like cooking, so I was letting the husband take the reins.  He is an amazing cook, and most of his meals center on meat (specifically of the grilled ribs and brisket variety).  I wanted to change that all up a bit. Plus, I really just wanted to start cooking again.

I did a little searching around and I found this book by Kathy Freston, Quantum Wellness: A Practical and Spiritual Guide to Health and Happiness.

The basic premise is this:  go gluten-free, sugar-free, and vegan; axe out caffeine and alcohol.  Yep.  All five at once.  For 21 days.  Then be gentle with yourself--in other words, do some exercise, meditate, and even slow down to rest.

I felt as if this was something I could get behind, indeed.   But then, I discovered that I have some issues with the book.  I already practice yoga and think I have a pretty good relationship with both food and with my own spiritual self (such as it is), so some of the self-help aspects of the book are tricky for me for to reconcile; however, the book certainly gave me the kick in the pants that I needed concerning nutrition.  (I like having someone tell me what to eat, what not to eat.)

The recipes at the back of the book were a turn off though.  Almost all were soy-based and were often about substitution or an attempt to recreate a meat-based dish rather than just good food (see Tofu Scramble with Tempeh Bacon or Tempeh Tuna Salad or Scampi-Style Tofu Wrap).  Uh-oh.  I just want really good vegetables.

But then I found this website, The Former Chef, and she had also done the cleanse and recorded it here, here, here, and here.  Perhaps even more than by the book, I was inspired by what this fellow blogger had to say.  I appreciated the no-nonsense approach to vegan substitutes and was inspired to ignore most of them on my trip to the Berkeley Bowl.  (I did buy a vegan butter (which is basically margarine but a tiny bit better for you; however in the five days I have been doing this, I haven't cracked open the package)). And I like how she recorded her progress (which I will have been working on as well).  Plus, she says:


"I’ve always wanted to try to do some sort of cleanse diet but I’ve been put off by the ones where you only eat one type of food (the soup diet! the cookie diet!), prohibit carbs, or where you only drink a lemonade with cayenne pepper for 10 days. Consequently, I’ve never done it because I know I’d only last about six hours."

I'll keep you posted on how it goes, once a week (in much the same style as The Former Chef--hey, she was an inspiration and she deserves the credit here).

If you're wondering what a sugar-free, gluten-free, vegan, alcohol-free, and caffeine-free diet looks like, you can see that it's not as hard as it seems at first, it can be delicious, and it got me cooking again.
Cleanse