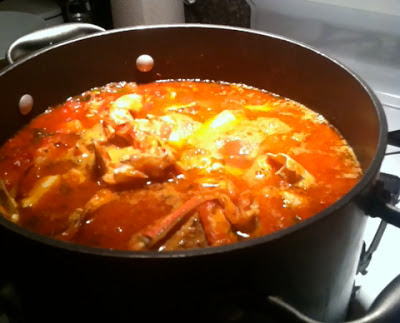 Oh, it has been too long, my friends.  The new year came and went, and then so did January, and now most of February.  How quickly it came and went, indeed.

Let's rewind the clock for a moment to talk about one of our favorite New Year's dishes, which could become one your favorite mid-winter dishes, as crabs are still in season (I saw a whole stack of them gleaming at the Berkeley Bowl yesterday).

Cioppino is the quintessential San Francisco dish.   Wander into any touristy restaurant in town right now, and they will have a steaming (and overpriced) bowl of this fisherman's stew on the menu.  Avoid the prices and make your own. 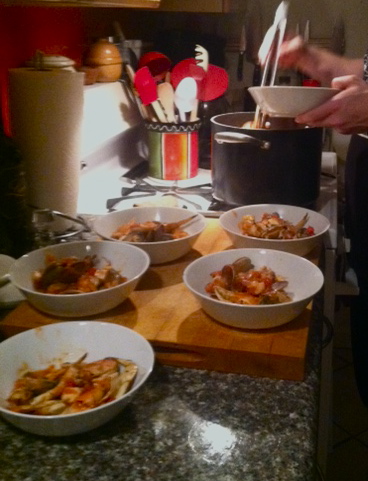 The story goes that this dish originated with the boats out at sea; the Portuguese and the Italian fishermen would chop up the leftovers of the day's catch and stew them to falling-apart consistency in wine, olive oil, and tomatoes.  Really, how can you go wrong with that?  Nowadays, serve it with some sourdough bread (another San Francisco staple), and you have something divine to sop up the boozy sauce of this wonderful stew.

This recipe is one that the husband grew up with and makes once a year.  The recipe takes awhile, and the smell of that much vermouth with tomatoes ushers in the new year for us now.  We generally serve it with a light salad starter and a decadent dessert.  And be prepared to get your hands dirty.  There ain't no pretty way to crack crab legs.  Tuck in with a napkin, a nutcracker, a good deal of wine, and go to it. We sure did. 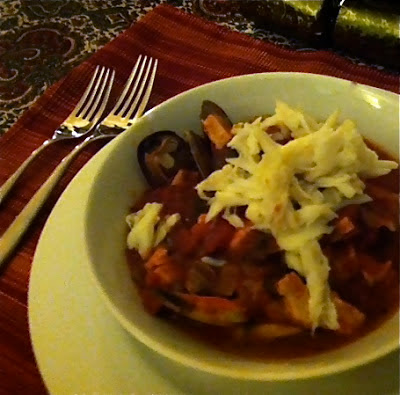 -------------
Cioppino
Recipe courtesy of the husband's father's former girlfriend, who copped it from who knows where...

3.  Add vermouth, cover, and simmer for 20 minutes.  While the broth is simmering, pick the belly meat from the crabs.

4.   After the vermouth has simmered for 20 minutes, add most of the crab meat, leaving claw meat in shell. (If cooking early and reheating, add claw meat only when reheating).  Set aside remaining crab meat.

5.  Add white fish and clams/mussels in shell.  Cook about 20 minutes until shell fish have opened.

6.  Serve in soup bowls with a sprinkling of the remaining crab meat on the top of the stew.  Serve with sourdough bread.
Clams Crab Fish Garlic Mussels Onion Tomatoes