Risotto is such a delightful dish. Comforting, creamy, simple, stable.

And I am a huge fan.

As in, I will make me a risotto any chance I get, with any sort of ingredient you can imagine. It doesn't matter--any season.

If it's in your fridge, you can put it in this Northern Italian rice dish. 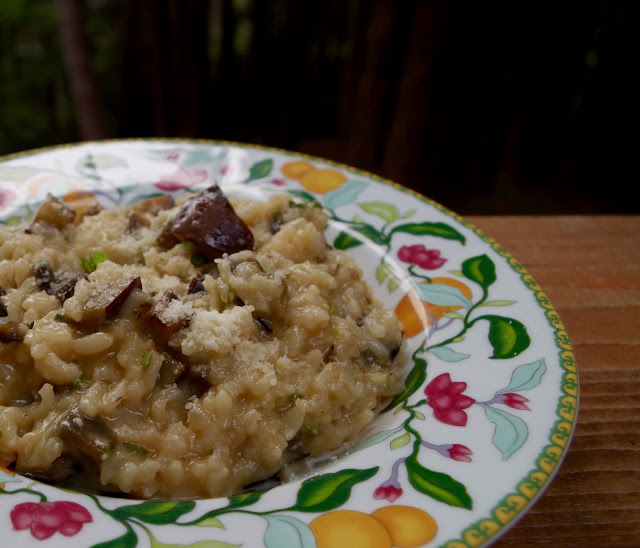 However, you will want a very specific kind of rice--a high starch, medium- or short-grain rice--in order separate this delicacy from any other rice dish. The high starch means that as you cook it, it releases its starch, making that requisite creamy smoothness to risotto.

The most popular risotto rice in the United States is, hands down, Arborio rice. This short-grained rice isn't as starchy as some of its popular Italian counterparts, but it is the most easily procured. However, a great article from Fine Cooking that details other risotto rices that are becoming more readily available in North America, including carnaroli, vialone nano, baldo, and Calriso. 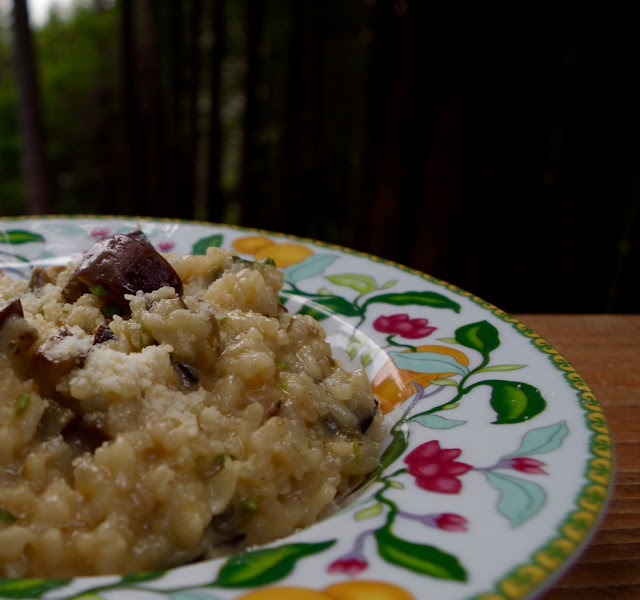 All risotto follows a pretty standard process--in fact it never really changes.
Even Yotam Ottolenghi, our culinary hero of the 21st century, makes his risotto just like that. 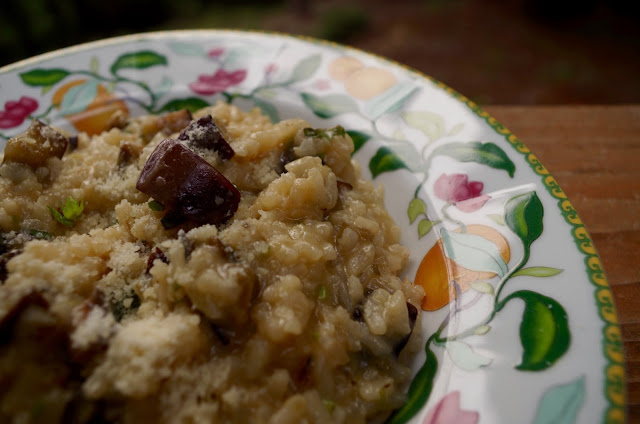 And so, when we were away for the week, I put together Ottolenghi's simple, summery risotto--in part because some beautiful eggplants arrived in our CSA box from Full Belly Farm.

The lemon in this recipe is strong, but it's just perfect for the hot days of summer. Remarkably, this dish felt relatively light, even though it is a cooked rice dish. Seriously, though, try this dinner the next time you need a simple vegetarian entree or want a lemon-y side dish for grilled chicken from your bbq. 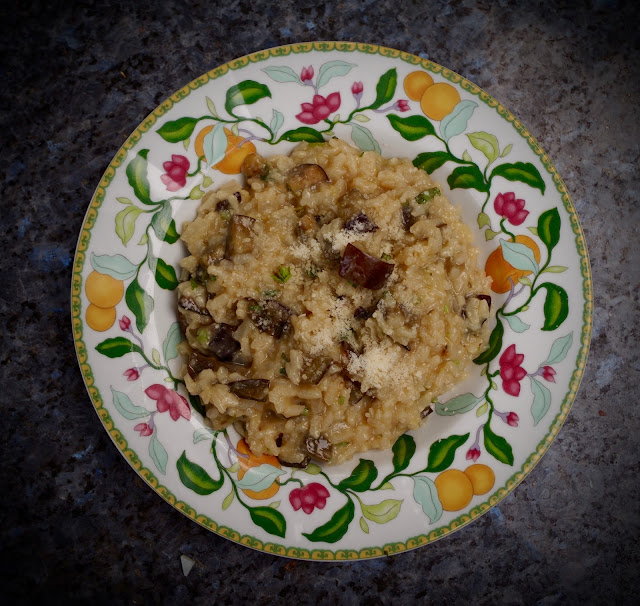 Instructions:
1. Begin by burning one of the eggplants. This can be done one of several ways:

No matter your method, the eggplant needs to deflate completely and its skin should burn and break.

2.  Once the eggplant is ready, remove it from the heat and make a long cut through it (allow any steam to escape before handling). Scoop out the soft flesh while avoiding the skin. Discard the skin. Chop the flesh roughly and set aside.

3.  Cut the other eggplant into a ½-inch dice, leaving the skin on. Heat ⅓ cup of the olive oil in a pan and fry the eggplant dice in batches until golden and crisp. Transfer to a colander and sprinkle with salt. Leave to cool.

5. Add the hot stock to the rice, a ladleful or cupful at a time, waiting until each addition has been fully absorbed before adding the next and stirring all the time. When all the stock has been added remove the pan from the heat.

6. Add half of the lemon zest, the lemon juice, grilled eggplant flesh, butter, most of the parmesan and ¾ teaspoon salt. Stir well, then cover and set aside for 5 minutes. Taste and add more salt, if you like, plus some black pepper. Stir in the diced eggplant, the remaining parmesan, the basil and the rest of the lemon zest.

7. To serve, spoon the risotto into shallow bowls and serve with additional basil, parmesan, and lemon zest.

*Here's the recipe for a good, basic broth from Ottolenghi's recipe in Plenty for Parsnip Dumplings in Broth
The broth can be made ahead of time and reheated when ready to add to the risotto. I actually began the broth as I was waiting for the oven to preheat for the eggplant, and then the broth and eggplant were ready at about the same time.

Instructions:
Heat olive oil in a large stock pot. Add all the vegetables and garlic, sauté until the vegetables color slightly. Add the herbs, spices, prunes, and enough water to cover the vegetables. Simmer for 90 minutes, adding liquid as needed to maintain the water level. Strain the broth through a sieve into a clean bowl, salt and pepper to taste.
basil Butter Cheese Eggplant Garlic Lemon Onion Onions Ottolenghi Plenty Rice Wine