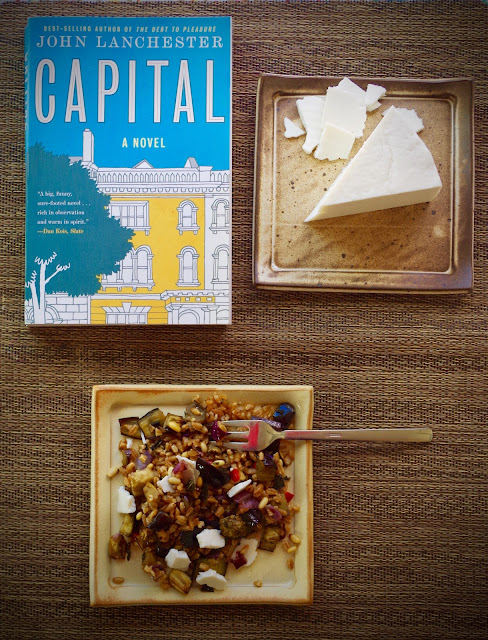 My affinity for bookclub is strong. These three other women and one man are truly fabulous people, and I am not just saying that because one of them is related to me (Hi, Father-in-Law!).  No, I am saying that because they are smart readers who push me, after two hours of snacking and drinking very good wine, to reconsider whatever bogus theory I have had about a book, and who push me to see far more deeply into books.

Even if I haven't finished reading them. But I swear, I actually finished this one. 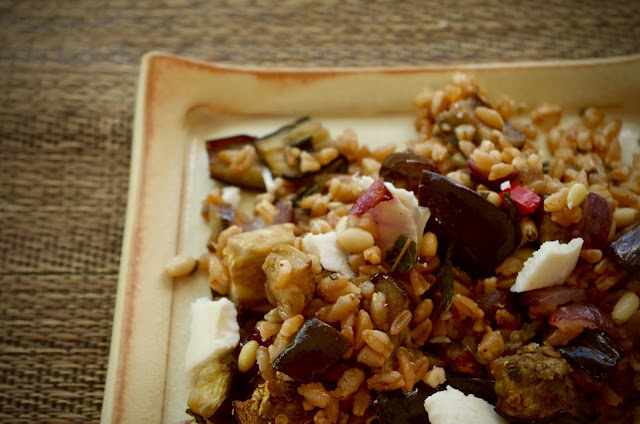 So, when bookclub rolled around this July, I mixed up this perfect grain salad.

And it's a delightful summer salad. It is nutty and savory and a perfect mate for all of the morsels and sauces that inevitably--and delightfully--make up the bookclub table fare. From pakoras to olives, cheeses to almonds, our table boasts eclectic and inclusive food--much like the eclectic and and inclusive members of the book club, given that it is made up of a journalist, a businesswoman, two artists (one a librarian and the other a teacher), and an education administrator (that's me!). 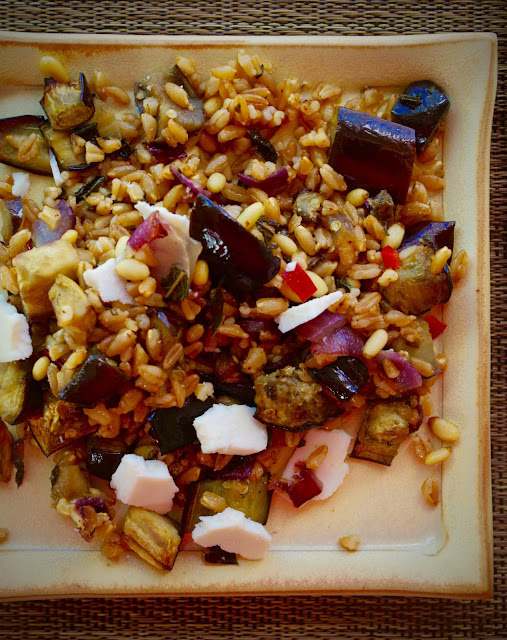 This salad won't overwhelm, but delightfully, it won't underwhelm. It's just the right amount of companionable. I like the congenial. I am a fan of the affable. Hence, I am a champion of farro, one of Italy's many contributions to the ancient grain world. 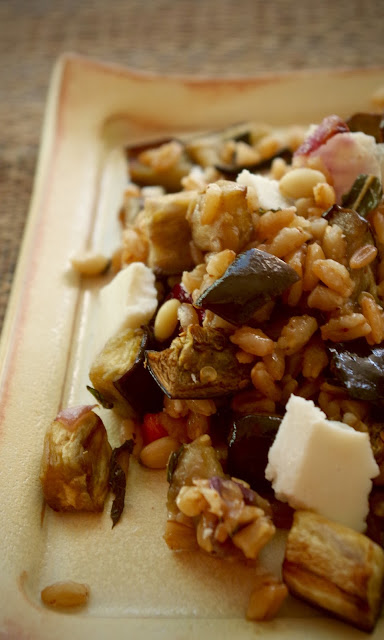 Farro, sometimes called emmer, is a hearty, nutty, crunchy little wheat grain that makes a spectacular little salad. And it is loaded with fiber, protein, magnesium, and iron. Farro, like many grains can be confusing, as it comes in whole, pearled, and semi-pearled versions.

--Whole farro has all the grain's nutrients but all the grain's dilatoriness in cooking.
--The semipearled has had part of the bran removed but still contains some of the fiber.
--The pearled takes the least amount of time to cook, but it has no bran at all.

This can be confusing, especially when the packaging at your local food purveyor merely says "farro." 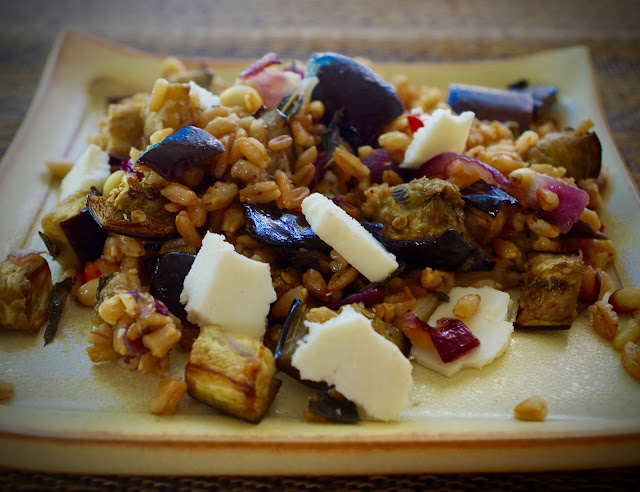 What we're looking for here is the semi-pearled version, only because it cooks a little faster than the whole and has more fiber than the pearled. But if you have some cooked farro, of any sort, on hand, you'll be fine. And if you're not sure which kind of farro you have, just keep cooking until it is chewy and satisfying.

No one is here to judge. 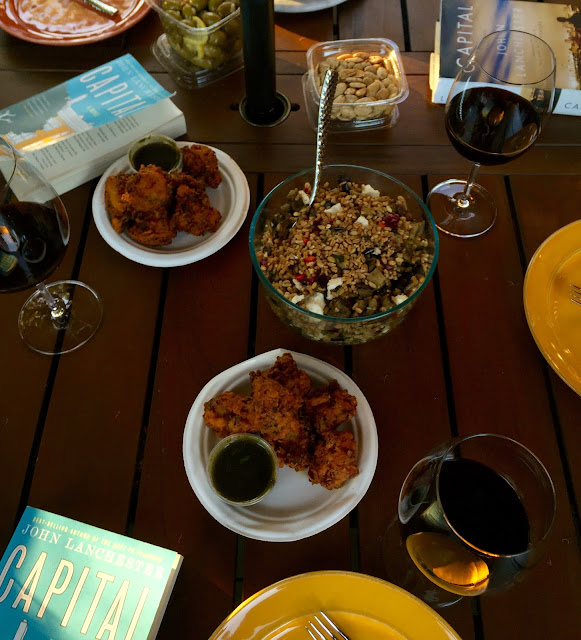 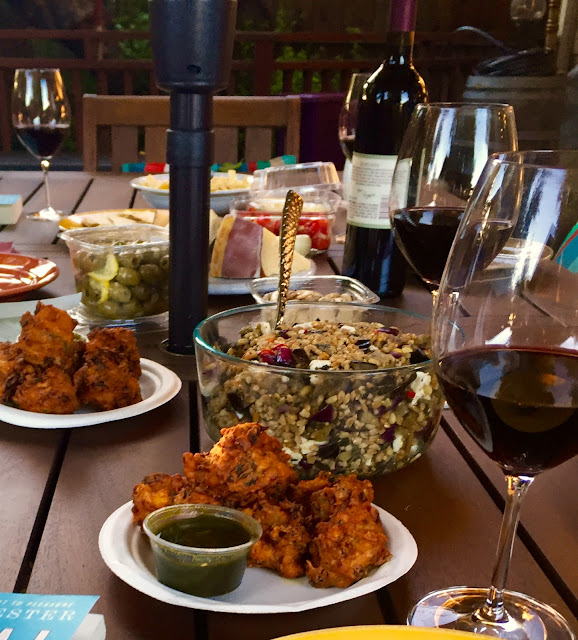 In fact, if you need to substitute out freekah or quinoa or wheatberries, the gods will still be on your side.  This will still be a healthy dose of goodness.

However, I remain a fan of good old farro with this recipe because the nuttiness plays of perfectly with the eggplant.

But you choose your grain. There is no farro police. 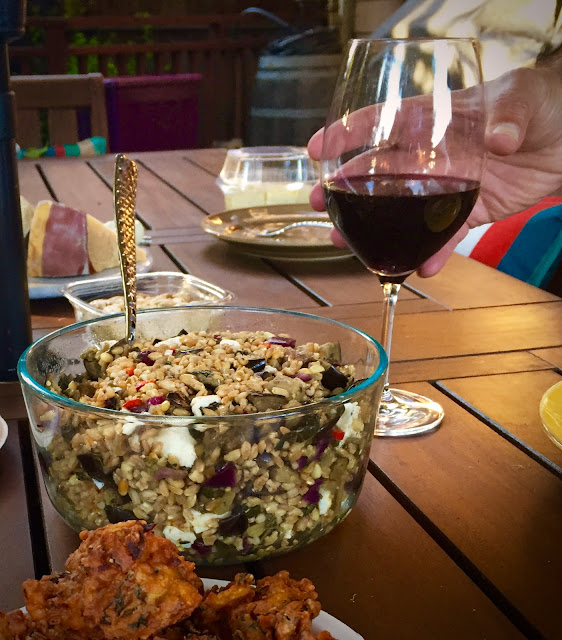 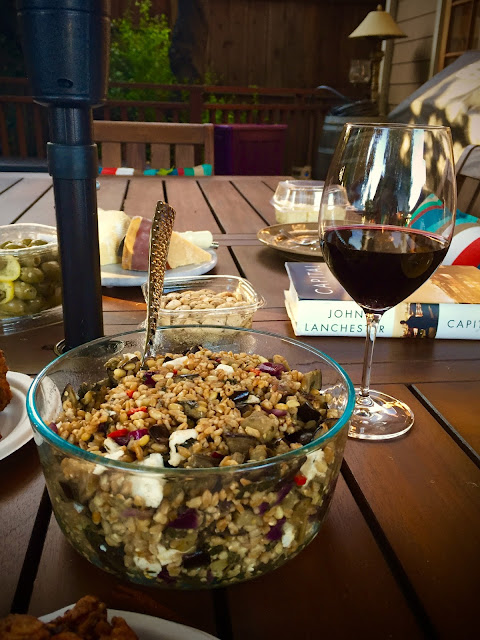 A few notes on the changes I made to the recipe below. I found that it needed a lot more vinegar, olive oil, and salt than Maria Speck's original recipe; I have merely made the changes below. However, you should play around with the amounts to suit your proclivities.

Further, the next day for lunch, I drizzled some yogurt over the top, just to add a little more creaminess. The yogurt was a nice addition, especially because of the mint. 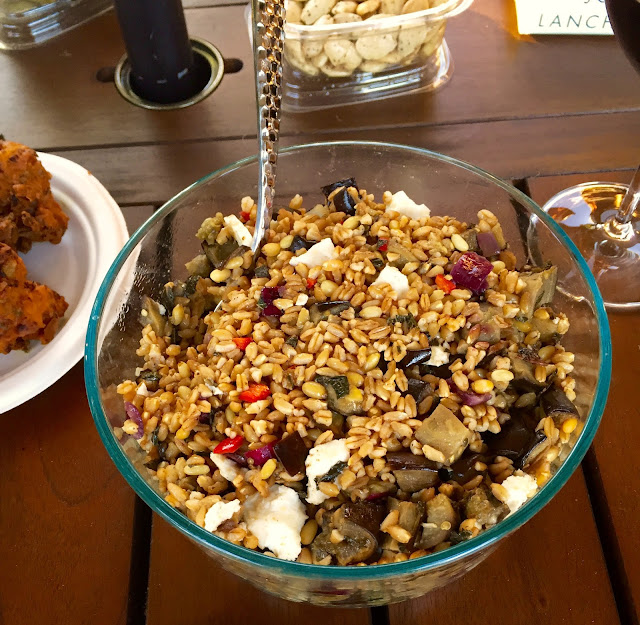 Let's turn our gaze back on bookclub before we close out this post, shall we?

We read John Lachester's Capital. Oh, I liked this book. It has absolutely no connection to farro or eggplant or mint or pine nuts. But, my friends, you just might need a good book this summer, one that considers money and capital and immigration and gentrification and community and real estate and death and family and passion on the precipice of the 2008 economic collapse. This is the one. It's a staggering little book that clocks in at 500 or so pages, so I guess it isn't so little, but my friends, it's worth a read, if for no other reason than the description of Petunia's garden. 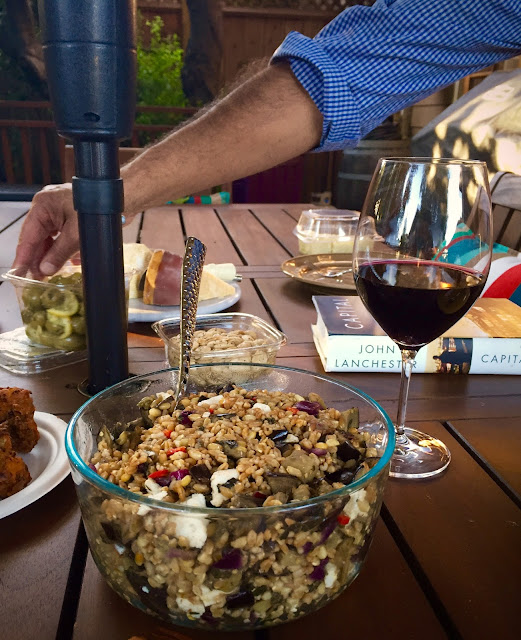 Finally, the book lends itself to a great discussion of about wanting what other people have, a central point in this book.

I could be glib and say that others will want this farro salad, but I won't. Just make it and share it. Simple as that. 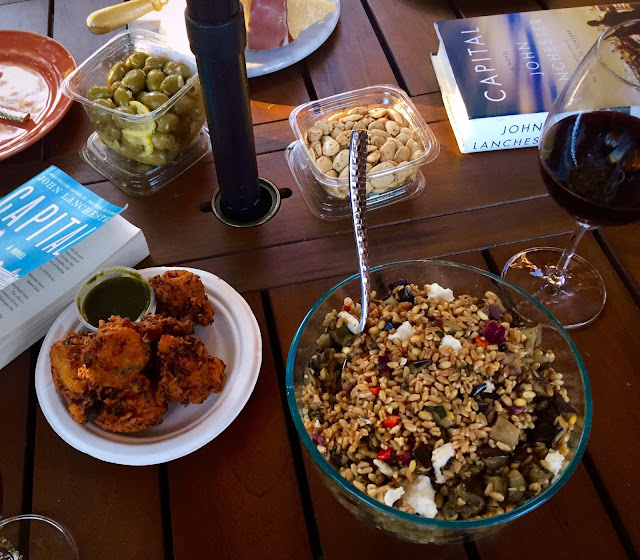 Adapted from Maria Speck's Simply Ancient Grains
I made some shifts in this recipe, for I found the original to be a little dry. My alterations are below.

2. To prepare the farro, add the water, farro, bayleaf, and dried chile to a 2-quart saucepan, and bring to a boil. Decrease the heat to maintain a simmer, cover, and cook until the grain is tender with a slight chew, 20-25 minutes. Remove the bay leave and chile, drain if needed, and transfer to a large serving bowl. Sprinkle with the minced chile, Aleppo pepper, and dried mint. Toss to combine.

3. Meanwhile, place the eggplant and the onion on a large rimmed baking sheet. Drizzle with 2 Tbsp of olive oil, sprinkle with salt, and combine well, using your hands.

4. Roast the mixture until the eggplant pieces have softened and are browned in spots and the onion slices have caramelized, turning them once with a spatula, about 30-35 minutes. remove the baking sheet from the oven and immediately sprinkle the vegetables with mint and drizzle with 1 Tbsp of the vinegar. Toss well with a spatula.