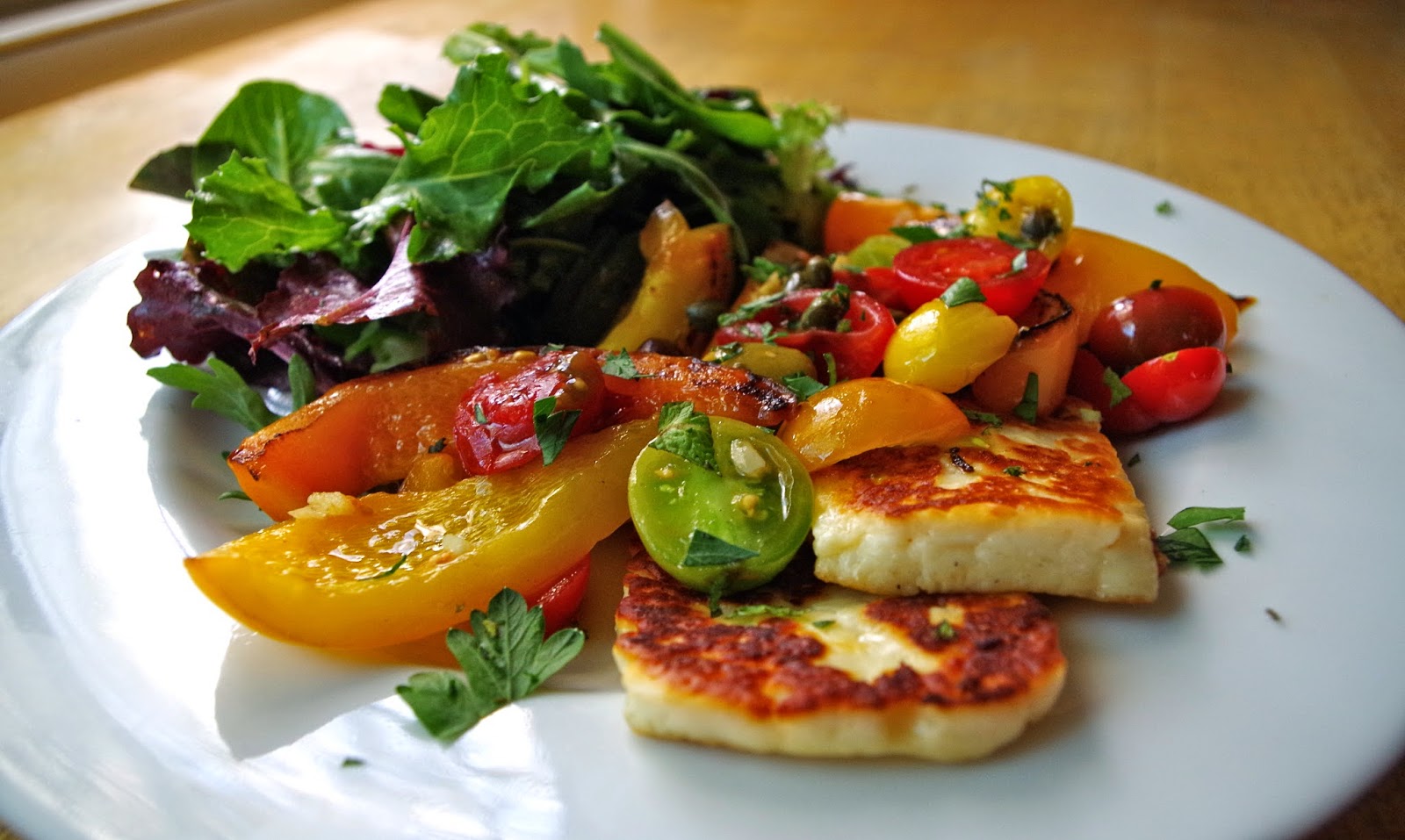 I do love Deborah Madison's massively informative cookbook, Vegetable Literacy, even though have posted about it only once. It is chock full of inspiring information, and in this age of marrying informed gardening, thoughtful cooking with delightful eating, it's a rich cookbook to have on one's shelf.*

*I guess I find this book very, um, informative, given that I have used the adjective, noun, and attributive verb form of "inform."


In this section on the nightshade family, Madison writes a lovely essay on peppers and chiles (reminding us that "the word for the hot pepper is chile, and the name of the dish of meat seasoned with hot peppers is chili"). In addition to detailing the Scoville scale wherein chiles and peppers are ranked according to heat units, Madison talks about the terroir of the pepper, much like one would for wine. Too little water, a little more sun, and your peppers from the same mother plant might act quite differently. Now a New Mexico dweller, she understands that the Southwest doesn't have the only hold on chile flavorings--she gives Louisiana its due and points to Florida's long history with the scorching Datil chile (since the 17th century, in fact). While Madison does not count herself a chile expert (a self-depricating nod to those who are), she does count Cliff Wright among them, and her recommendation of his cookbook Some Like it Hot means I know what I am getting my heat-loving brother for Christmas. And if you're reading this, dear brother, pretend you don't know. 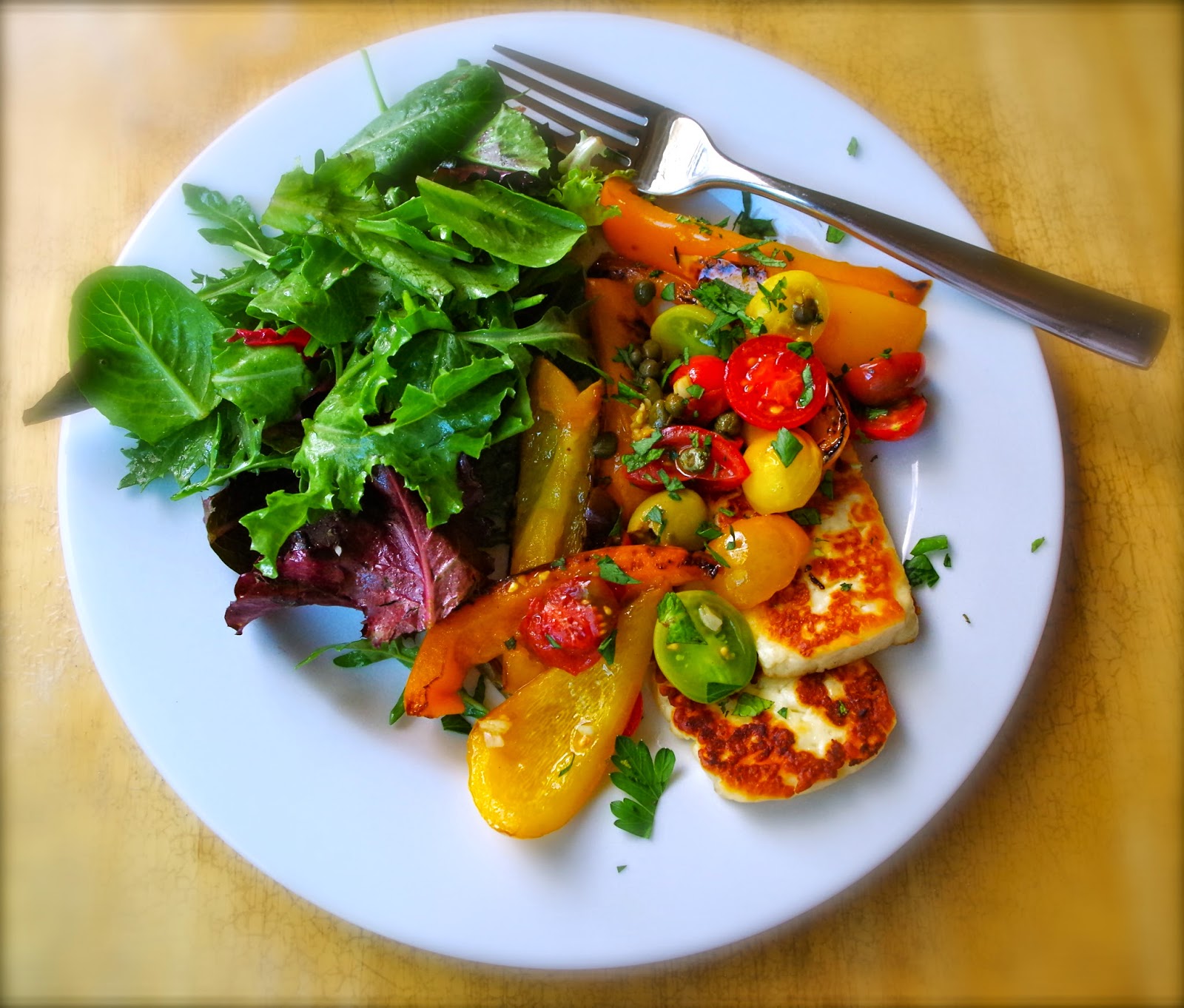 While Madison laser focuses her keen observational skills on the pepper, a little internet research leads to a wealth of information on the "cheese that grills" (or so claimed the packaging on my halloumi). Halloumi, for those of you who were like me and thus not really in the know about this wonderful little cheese, is a Cypriot semi-hard cheese.  (Those of you already on top of this food trend, please share some of your yummy recipes with me.) A mix of goat's and sheep's milk, it has a high melting point, so slap this durable white cheese on the grill or throw that in your frying pan. Very salty for it used to be preserved in a salt brine, it is often served with mint leaves (as it is here) and some suspect the cheese and mint were often paired due to the anti-bacterial qualities of the mint.  Indeed, this cheese has a heck of a history, dating back well before refrigeration in the 16th century. Further, it is a communal cheese, as most 16th-century families had only a few small animals to produce a little bit of milk. The families would come together as a community (usually led by women), pool their resources, make some halloumi, and leave with their own adequate supplies of this dense cheese. Nowadays, it is commercially produced, of course. This website has a wealth of other halloumi information, including the chemical composition from different animals' milk. The Guardian even has a recipe for how to make your own halloumi.  Invite some friends over.  It will be fun.


But beyond all this information about the Scoville scale and halloumi making, this is a wonderful mid-summer salad. The sweetness of the peppers, the acidity of the tomatoes, the saltiness of the cheese, and the refreshing quality of the mint all come together to make a solid dinner. In fact, we had it as a main course with a lightly dressed salad of spring greens, and we had leftovers. Enough to for lunch the next day. Truth be told, however, the halloumi was best straight from the pan; thus, if you expect leftovers, fry up the remainder of the cheese when you serve the rest of the peppers.

Enjoy your Cypriot cheese and sweet capsicums.  We sure did. 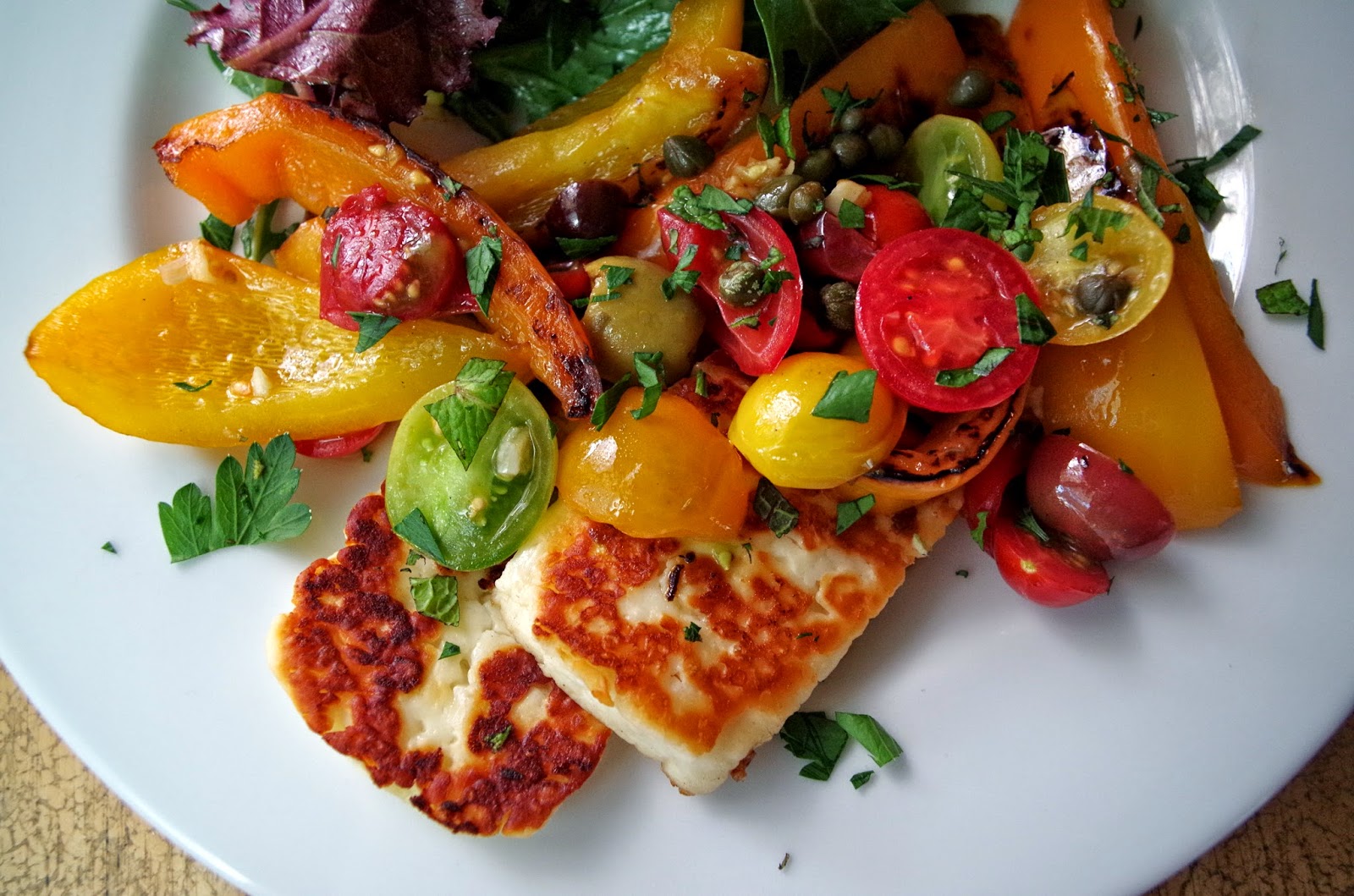 Yield:
2 very generous helpings for a main course dinner; 4 as a first course

Instructions:
1.  Combine the tomatoes, olives, garlic and capers in a bowl and moisten with 1 tablespoon of the olive oil.

2.  Heat 1/2 tablespoon of the oil in a skillet over high heat.  When the oil is hot, add the peppers and saute until softened and seared, about 7-8 minutes.  Add them to the bowl with the tomato mixture.

3.  Return the pan to medium high heat and add the remaining 1/2 tablespoon oil.  When the oil is hot, add the cheese and cook, turning to color both sides.  You need only about 2 minutes per side.  Remove the cheese from the pan.  Return the pepper-tomato mixture to the pan and cook for 1 minute, then turn off the heat and add the mint and parsley. Season with salt and pepper.

4.  Place the cheese on a plate, and cover with the pepper-tomato mixture, sizzling from the pan.  Serve with warm pitas and a simple salad for a main course meal.

*Note:  Madison recommends 3 tablespoons, but we cut down.  I found even the 2 be a little heavy handed.  You know your palette.  Decide how much oil you need.
Bell Pepper Capers Cheese Garlic mint Olives Tomatoes Vegetable Literacy