Oh, what a sauce this is.   What a glorious, glorious sauce.

This sauce comes from the Sephardic Jews, who resided on the Iberian peninsula until the Spanish Inquisition.  After their expulsion from Spain in 1492, many Sephardic Jews were folded into the Mizrahi communities in Northern Africa and the Middle East.  Such intermingling of people and cultures has produced some culinary superstars; this being no exception.  Indeed, you can taste the Spanish, Moroccan, and Libyan influence on this sauce.

Sephardim pride themselves on their chraimeh recipes, and often serve them at Rosh Hashanah and Passover celebrations (whereas Ashkenazim might serve gefilte fish).  The husband father's family is Jewish, his grandparents immigrated from Germany in the early 1930s.  Come Rosh Hashanah, despite the fact that he does not practice, the husband is greeted in the street by strangers with a hearty Shanah Tovah, a celebratory Happy New Year, or a simple Shalom. 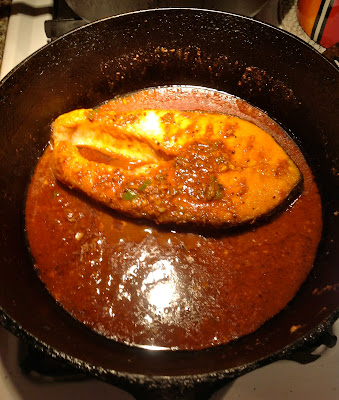 Whether you celebrate Rosh Hashanah or not, this is a dish you want to break out for any party or (why not?) just a standard weekday dinner.  It's so very, very good.  The sauce is the star, and you might even want to double or (gasp!) triple the sauce just so you have some more around (freeze it!) next time you need a sauce fix.  Your choice of fish doesn't matter much.  We used salmon, but you could use halibut or tilapia or grouper or sea bass or flounder or amberjack (which apparently is most commonly used in Jerusalem) or whatever.  Serve as a starter, warm or at room temperature with challah or any good white bread for dipping and lots of lemon.

Then lick the plate clean. 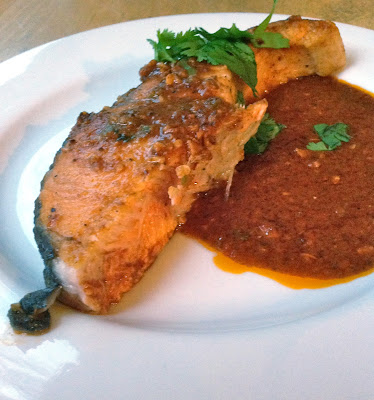 1. Heat two tablespoons of oil over high heat.  Place the four in a shallow bowl, season generously with salt and pepper, and toss the fish in it.  Shake off the excess flour and sear the fish for a minute or two one each side, until golden.  Remove the fish and wipe the pan clean.

2.  Place the garlic, spices, chile, and 2 tablespoons of the oil in a food processor, and pulvarize to form a thick paste.

3.  Pour remaining oil into frying pan, heat well, and add the spice paste.  Stir and fry for 30 seconds, ensuring the spices do not burn.  Add the water and tomato paste to the spices to stop the cooking process.  Bring to a simmer and add sugar, lemon juice and salt and pepper.  Taste for seasoning and add more salt and pepper as needed.

4.  Put the fish in the sauce, bring to a gentle simmer, cover the pan and cook for 7-11 minutes, until it is just done.