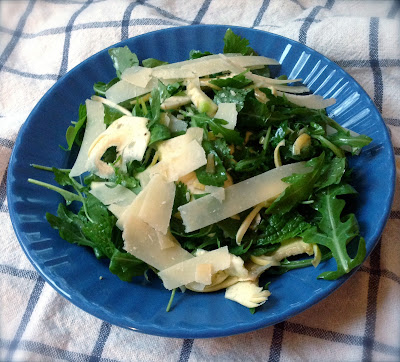 Well hello again.  It's fall.  It's my favorite season of the year, and generally it means squash soup and apple butter and warm blankets and sweaters.  However, the weather has been warm during the day (but brisk at night), so instead we have Ottolenghi's raw artichoke and herb salad.  This is a good thing.

We have a new cookbook, my friends.  And we all know how much I love new cookbooks, and it's even better to have a new cookbook from Ottolenghi, given that I am quite a fan of his other cookbook (see here and here and, yes,  here).  This cookbook celebrates the variety of foods from Jerusalem, where Greek Orthodox monks, Russian Orthodox priests, Hasidic Jews, non-Orthodox Jews, Sephardic Jews, Palestinian Muslims, Christian Arabs, Ethopian Copts, and Russian nuns (to name a few) all come together in this global city to create, as Ottolenghi says, "an immense tapestry of cuisines."  Ottolenghi, with his business partner Sami Tamimi (Click here for a lovely tale of the two and of their London shops), explore the commonalities of cuisine and the divergences in this rich cookbook, where artichokes, cucumbers, mint, tomatoes, pickled vegetables, herbs, olive oil, lemon juice, olives reign supreme.

Thus, it is not surprising, given the culinary chops of these two and the depth of culinary culture of this city, that this herb salad is so delightful. In this recipe Ottolenghi sings the praises of the artichoke, advocating for an afternoon set aside to buy too many (in fact "great numbers") and to trim and clean them, storing all of the ones you don't use in the freezer for a rainy day.  Not bad advice.  And this salad is recommended as an accompaniment to anything fatty and hearty, such as lamb shawarma or latkas.  Yum. 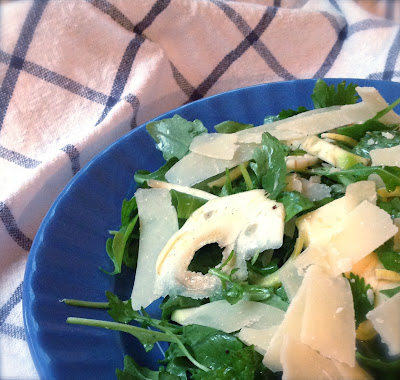 Here are the negatives to this recipe:  I found there was a little too much oil, but I think my palate has changed to want a less olive oil.  And here's the kicker:  for all of their hype, the artichoke hearts were underwhelming.  Can you believe that?  After the work of shedding their leaves and peeling the base and shaving what's left, it was surprising to find that I didn't love them.

Here are the positives:  light, refreshing, and quite tasty.  I might play with the choke--maybe sun chokes?  Maybe just long curls of cucumbers?  But the mint is lovely, and you'll be happy to know, because who isn't, that mint has lots of potassium.  I am a huge fan of arugula.  Couple that sweet, cool mint and that sharp arugula with the distinctive taste of cilantro, and, people, you have the base of something very, very good.  But try it once with the artichoke hearts.  See if you like it better than I did.

1. Prepare a bowl with water mixed with half of the lemon juice.

2.  Remove the stem from one artichoke and pull off the tough outer leaves.  Once you reach the softer, pale leaves, use a large, sharp knife to cut across the flower so that you are left with the bottom quarter.  Use a small, sharp knife to remove the outer layers of the artichoke until the base (or bottom) is exposed. Scrape out the hairy "choke" and put the base in the acidulated water.  Discard the rest, then repeat with the other artichokes.

3.  Drain the artichokes and pat dry with paper towels.  Using a mandoline (or a large, sharp knife), cut the artichokes into paper-thin slices and transfer to a large mixing bowl.  Squeeze over the remaining lemon juice, add the olive oil, and toss well to coat.  You can leave the artichoke for up to a few hours if you like, at room temperature.

4.  When ready to serve, add the arugula, mint, and cilantro to the artichoke and season with a generous amount of salt and pepper.  Toss gently and arrange on serving plates.  Garnish with the pecorino shavings.
Artichokes Arugula Cheese Jerusalem: A Cookbook Lemon mint