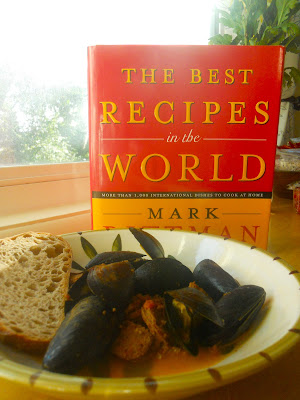 It has been a while since I posted.  There are excuses--many of them involve the ocean and John Steinbeck.  I see nothing wrong with blaming both of them equally for a month of intensity.  At Steinbeck camp, an NEH-sponsored seminar for secondary (and some middle) school teachers (and a librarian) in the past month, I have been thinking a lot and cooking not at all.  I am happy to return home, to put my hands back into the kitchen.  To wash things.  To chop things.  To steam things.

I find myself back in my house, unpacking, cleaning, getting ready for guests this week; instead, I think I just want to think about the smell of the ocean--mussels smell exactly the way the ocean does.  Salty, fresh, and a tiny bit like decay.

To make everything even more exciting, this is a recipe from page 210 (see my about page to find out why that's important to me) in the Mark Bittman The Best Recipes in the World cookbook, a gift from the husband.  Boy, it feels good to be back in the kitchen. 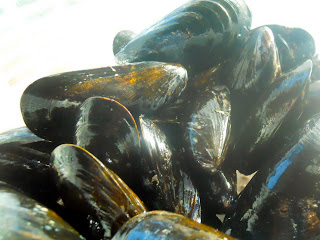 And these mussels are prepared the Portuguese way.   Perhaps such a preparation is appropriate as it was the Portuguese who first spotted Monterey, where I have been happily holed up, back in 1542.  However, the Spanish were more persistent, and Monterey became the capital of Spanish California in 1776.  Nonetheless, let's at least take a gander at this traditional Portuguese preparation of mussels:

Linguiça is simply a Portuguese pork butt sausage with heavy garlic, red chilles, peppercorns, turmeric, and salt.  But it turns into a rather mild, lovely little flavoring for mussels.  This recipe is simple to make, and if I were to do anything to this easy (and weeknight) dish, it would be to add white wine as the mussels are cooking, just to have a little more broth.  Definitely serve with bread to sop up the broth. 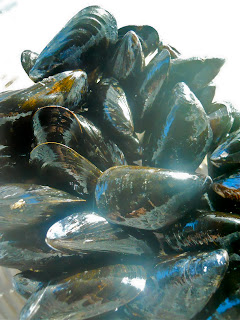 Finally, I just want to share one of my favorite, and highly yogic, quotations from The Sea of Cortez, a little joint project between John Steinbeck and Ed Ricketts (and Carol Steinbeck, John's first wife, even though she is not named in the book):

"The truest reason for anything's being so is that it is.  This is actually and truly a reason, more valid and clearer than all the other separate reasons, or than any group of them short of the whole.  Anything less than the whole forms part of the picture only, and the infinite whole is unknowable except by being it, by living into it." 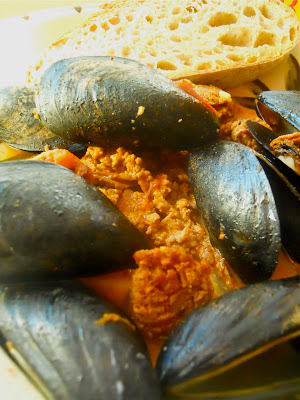 Yep.  While the eating of mussels is a poor substitute for the experience of an early morning walk by the ocean, which I am grateful I got to do almost every morning for three weeks, I am happy to return to my own kitchen, to cook again.

One Year Ago: Corn & Barley Salad  and  Bulgur & Broccoli Salad


2.  [Now would also be a good time to add a little white wine, say 1/2 a cup.  But apparently the addition of the white wine is a little more French than Portuguese.  You make the call.]  Add the mussels and cook until they open about 10 minutes.  Covering the pot is optional, but covering the pot does make it go a little faster.


3.  When almost all of the mussels are open, add the garlic and cook for another minute or two.
Garlic Mussels Sausage The Best Recipes in the World Tomatoes