Rutabiya: Tagine of Meat with Dates 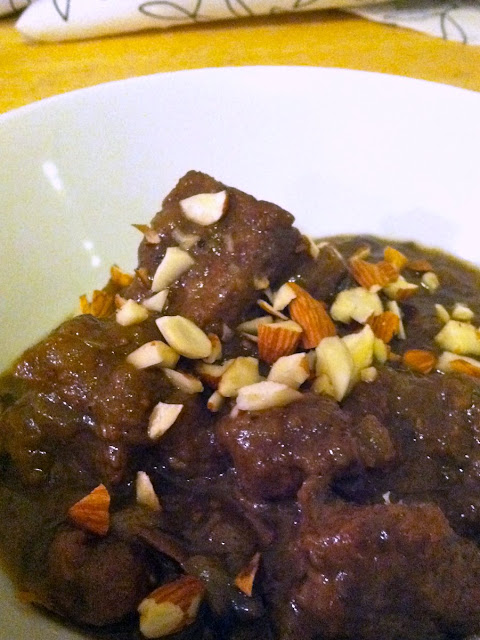 I love a tagine.  So much so that one fine Christmas morning, I came downstairs to find that Santa had left a tagine for me under the tree.  Santa knows me well. 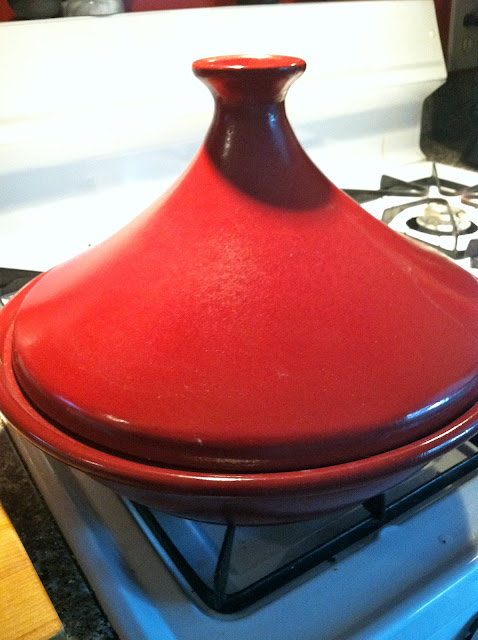 The clay pot with the conical lid, itself called a tagine or tajine, lends its name to the dish itself.  Tagines blend meat with vegetables and savory with sweet, and they pack a punch with a pretty spectacular blend of spices ranging from cumin to cinnamon, ginger to saffron.  According to Claudia Roden, Middle Eastern cooking sage,  Moroccan cooking was the most of all the North African cuisines to be influenced by the Arab invasion from the seventh to the fourteenth centuries.  The culinary culture of medieval Baghdad is blended with the indigenous Berber traditions and the Spanish influence.   That's a blending of gastronomic customs that I can get behind.

This week at book club, where we discussed The Tiger's Wife, one of the members brought a tagine.  Yes, please.  While the tagine has its roots in Moroccan cooking rather than in Yugoslavian cooking (Yugoslavia being where the novel is set), it was still quite a welcome addition to the buffet as we talked about what we really thought that fabulous freshman novel was all about.  [I would argue that as much as it is a story of identity and of self discovery, it is a war story about how a culture comes to suffer and possibly make reparations through storytelling; however, I am known to float bogus theories.  My final assessment of the novel, by the way, was that it is stunningly written, if a little hard to get into.] 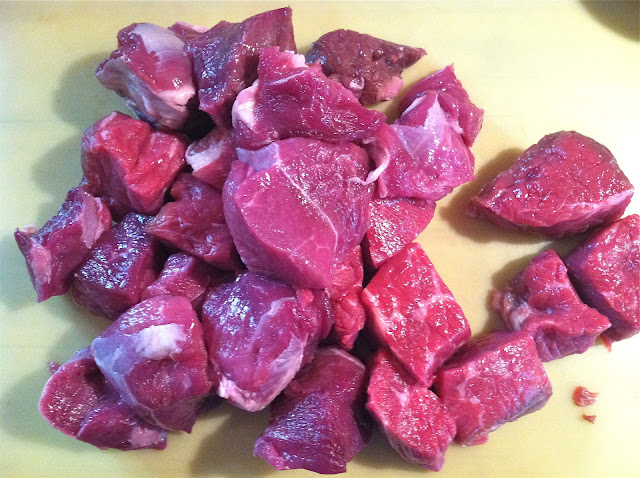 Back to the cooking: Tagines are simply long-braised stews of generally inexpensive meats, liberally laden with vegetables of all kinds.  Making a tagine is pretty easy.  Braise meat (lamb, chicken, beef) and/or vegetables (onions, eggplant, butternut squash, sweet potatoes) in water and a spice mixture (ras el hanout, cinnamon with ginger and saffron, cumin with cinnamon and chiles) for about an hour and a half, add fruit (dates, raisins, quince, preserved lemons, apricots, prunes) and honey, if desired, and cook for another twenty minutes.  Sometimes add beans (chickpeas) or olives.  Eat.  Lick fingers. 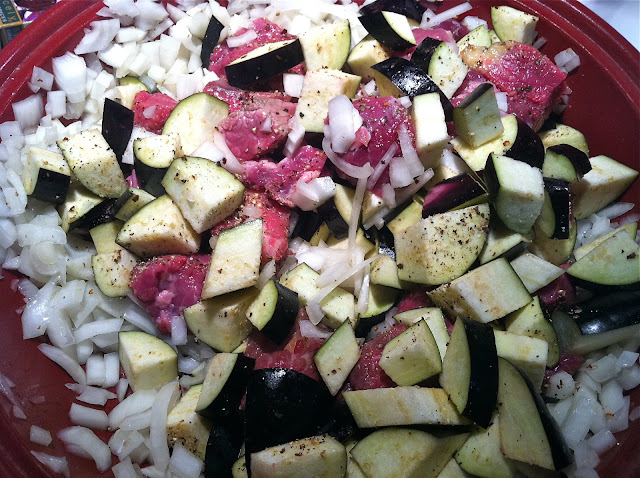 That said, this particular recipe, entitled Rutabiya after the Arabic word for date (rutab), is rather liberally adapted from Roden's cookbook. She does not include eggplant and uses only lamb.  I went the beef/lamb route, for I can find lamb a little gamy from time to time.  However, if I were to make this again, I would keep this at 1 1/2 pounds of lamb.  The braised onions and eggplant with the dates are an unctuous and sweet counterbalance to the strength of the lamb.

Overall, cooking this number was a pretty spectacular way to spend a Friday evening after a week of back-to-school meetings.  Just perfect.  And thank you again, Santa, for the pot to cook it in. 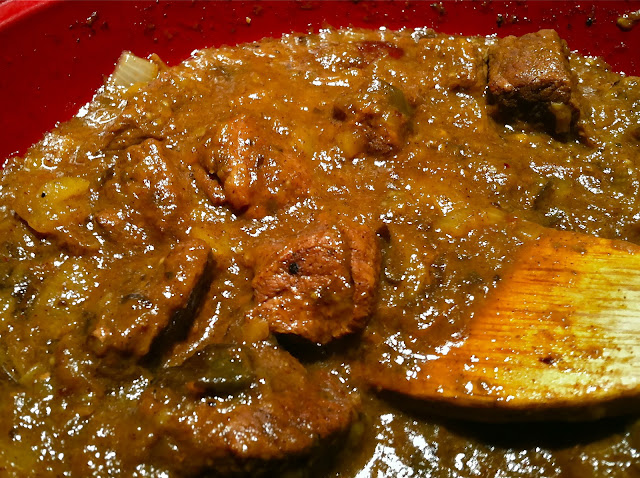 Instructions:
1.  Heat the oil.  Cut the meat into 1-2 inch chunks and dice the eggplant.  Add the meat and eggplant to the oil.  Add salt, a generous amount of pepper, ginger, 1 teaspoon of the cinnamon, and onions.  Cover with water and simmer, covered, for 1 1/2 hours, or until the meat is very tender.  Add water to keep the meat covered and turn the pieces over from time to time.

2.  After the hour and a half, add the honey, the remaining cinnamon, and the dates.  Cook 10-15 minutes more.

3.  Sprinkle with almonds and serve.