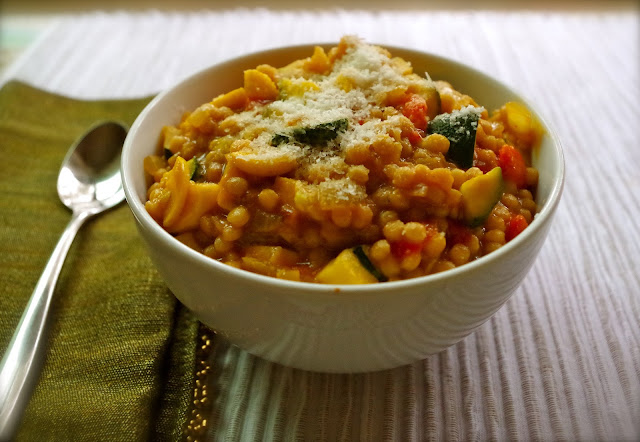 Continuing in my newest interest in expanding my repertoire of grains, I present to you a simple summer barley risotto.

Sure, sure, you purists out there (I see you!) are scoffing right now. Barley cannot be risotto, you say. Okay, fair enough. You're right: that hearty and heartwarming Italian rice dish is steeped in the history of that country, and to suggest that barley can waltz right in and claim to be risotto is a little ridiculous. I hear you.

However, we're trying to mix up the diet here, people. 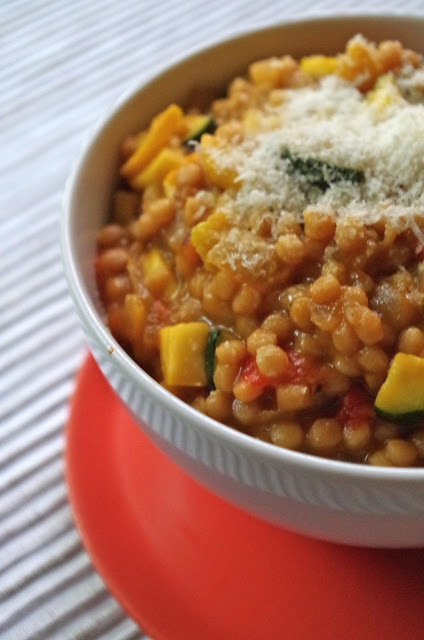 While its history is somewhat contentious, most agree that Italian rice has origins in India, the Arab world, and Spain. Emerging from India, rice was probably introduced to Spain by the Arabs in the Middle Ages; the Spanish then brought rice to Italy, probably through the Po Valley (with its rivers and flat lands--the ideal rice-growing environment) in the 14th century. Both the Spanish and Italian cooks ran with it. From paella to risotto, rice became associated with some of the signature dishes of these Mediterranean cuisines. 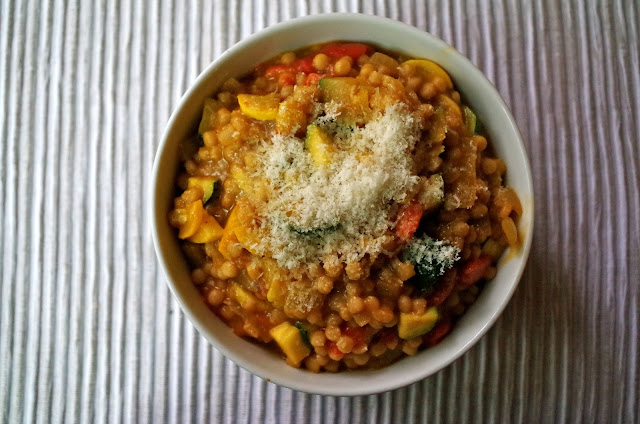 The simple technique to make risotto probably came from an earlier recipe for a slow-cooked porridge-like soup called puls, where rice was boiled in milk, water, or broth until soft. (Corn was also prepared this way, and eventually led to polenta.) Due to the starchy quality of the short-grained rice, the grains became creamy and sticky in the liquid, unlike the longer-grained varieties.

Nowadays, to make risotto, you simply start with a short-grain rice toasted in a little butter or oil and some aromatics (onion, garlic). Then, you can add a little wine or vermouth or even some lemon juice, just to brighten everything up, or you can that just start with broth. Then ladle after ladle of liquid is added, waiting until the rice has absorbed all of the broth between each ladle-full. This slow cooking process smooths and blends the flavors throughout the grain and creates that lush texture for which risotto is so beloved. While this method can take awhile, the results are creamy with a little bit of bite to the grain, and when you add a little cheese or butter at the end, it's just downright rich and satisfying food.

And the reason this barley recipe even gets to breathe the name risotto is because of this very technique of preparation, resulting in a creamy and gratifying alternative to rice. 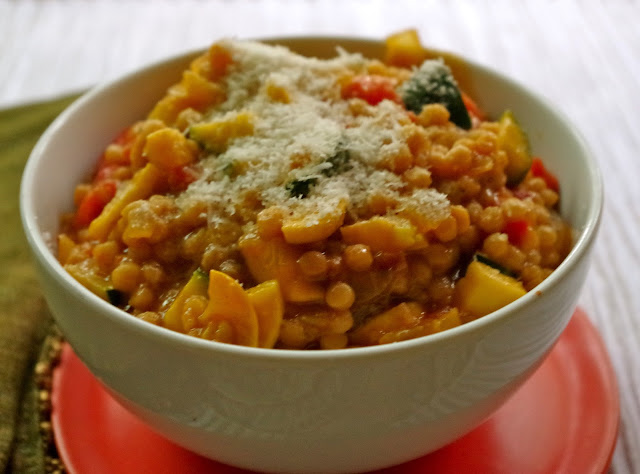 Why would you want to replace the gorgeous short-grained Arborio or Carnaroli or Vialone Nano? Well, let's explore the differences between rice and barley. As for calories, the two (short-grained rice and pearled barley) are neck and neck. Barley has a little more sodium than rice, but barley packs a whopping three to six times more fiber than does an equivalent amount of short-grained rice (depending on your variety of rice). Barley, on the other hand, has less protein than does rice. And if you're gluten-intolerant, barley is not your friend, for it does, indeed, contain gluten. Further, barley takes a bit longer to cook and requires a little more liquid than does rice.

Thus, it seems to me that I am not wholly committed to giving up rice entirely, but to mix it up a little, barley makes a fine alternative. 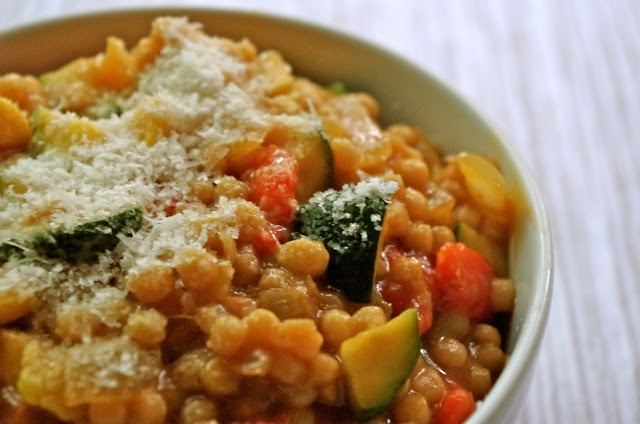 This recipe is a lovely and versatile one. With zucchini and bell pepper becoming quite abundant, in our CSA box, we race to use them up each week. However, there's no need to get caught up in this recipe at all. Just use it as an inspiration and add whatever veggies you have on hand. I'll admit, I even added a little cooked and drained spinach post photographs because I had some in the refrigerator. And go ahead and get seasonal. Why not some butternut squash and sage this fall? Or spring peas and leeks next May?

No matter the add-ins, this proudly barley dish is a pleasant change of pace, whether or not you decide to call it risotto. 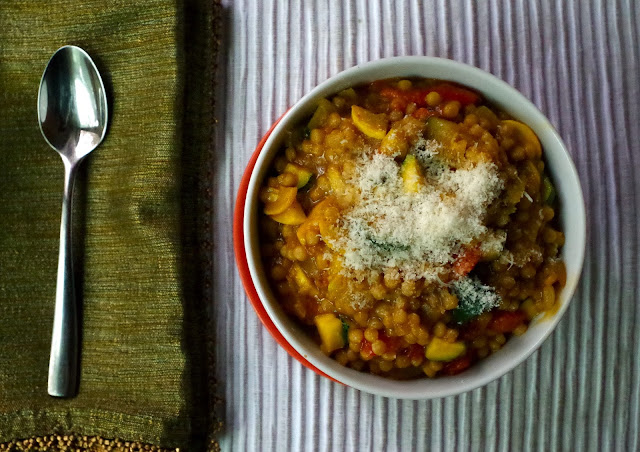 Adapted from  The New Sonoma Cookbook

Before you begin this recipe, heat the stock you're using and sautee or roast your veggies to add in at the end.

Instructions:
1.  In a large skillet, saute the onions in the olive oil until golden.  Add garlic and cook until aromatic.  Add barley and stir to coat with the olive oil.  Then add the wine and stir until the liquid has been absorbed.

2.  Add about 1 cup of hot stock and the bay leaf to the barley, just enough to come to the top of the grain. Cook over medium heat until the liquid is absorbed, stirring occasionally. Repeat with 4 more cups of hot stock, adding 1 cup at a time and cooking until the liquid is absorbed before adding more. This should take about 35-45 minutes. If you use up all the stock and the barley is still a little stiff, just add more hot liquid, 1 cup at a time. Cook until the barley is slightly creamy and just tender.

3.  When the barley is al dente, gently stir in the zucchini and bell peppers; cook until the vegetables are wamed, about another 5 minutes.  Just before serving, remove the bay leaf; stir in the cheese and zest. Adjust the seasoning with salt, pepper, and additional lemon juice to taste.

**Connie Gutterson, our cookbook's author, gives a variety of options for the combinations. I used zucchini and red peppers, but you might use any of the following or come up with a combination of your own: