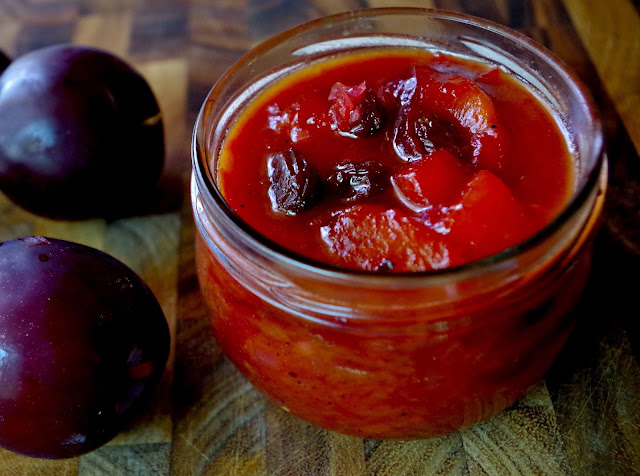 Summer is always my time to reconnect--to myself, to my home, to my family, and most certainly to my friends. A little over a week ago, I met up with a dear friend of mine (whom I have known since the very early summer of 2003); we sipped tea and nibbled on astonishingly delicious salted chocolate rye cookies at Tartine in the city. (Okay, I ate my cookie in about two bites, but they were just so good.) She brought me a bag of plums from the bounty of her yard--some from a Green Gage plum tree and some from a Santa Rosa plum tree. She apologized for being a little late to our tea date, but she had almost forgotten the bag of plums on the table and had to turn back, for she knew I would hardly forgive her if she had left them behind.

As we settled in, I asked her to tell me the story of these plums. Often when I ask someone this question about food, the story is as simple as the one that our former neighbors (who just moved, darn them) have to give: that apricot tree was just there when we moved in. However, such was not the case with my friend. 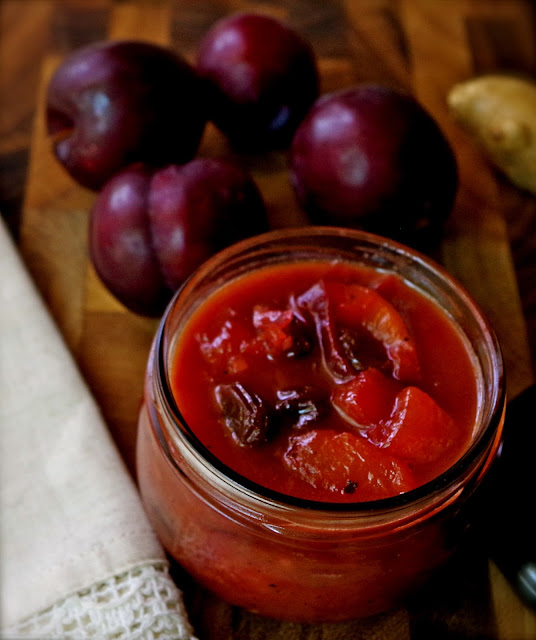 Indeed, when her grandparents were young, living in Leipzig, Germany, they had a Green Gage plum tree in their yard. They would feast on these plums, not surprisingly given that Gage plums are cultivars of the common European plum. Her grandparents had to leave Leipzig to escape persecution as European Jews prior to World War II, and they settled in the United States. To my friend, the Gage plum tree is this connection back to her family, back to a history that had sweetness in the midst of having to leave one's homeland.

When she and her husband had a home in Oakland, her husband bought her a Green Gage plum tree and planted it in their own yard. They were settling down roots. However, luck would have it that they moved to the South Bay, but her husband dug up that plum tree to bring to their new home.

But luck is just that--luck. One never knows how long it will last. In an uncanny event, another tree felled her beloved plum tree (and a beautiful stone wall curving around their front yard). However my dear friend is not one to ever be daunted. In fact, I don't know that she's capable of it. They planted yet another Green Gage plum tree as well as a Santa Rosa plum tree. These trees equal family to her, and there is nothing that is going to come between her and these plums. This year, both trees have been producing prolifically, and she is willing to share the bounty with her friends. 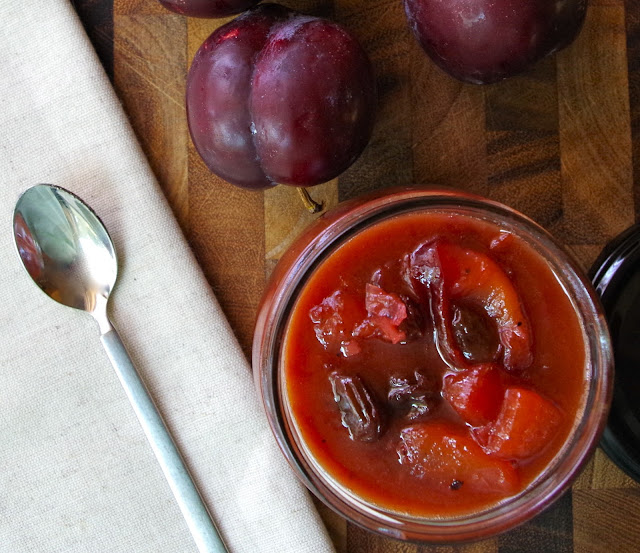 I love this story. I love the connection to her grandparents, the deep rooting of her own family in the Bay Area, the refusal to be razed, and her own perennial optimism (demonstrated both in her plum trees but in just about everything she does).

I also love that I have my own connection to Leipzig. Over a decade ago, the husband found a summer job in Leipzig--during those sweltering summer months, we lived in a room with one twin bed, a chair and a desk with a communal kitchen down the hall. However, what we also had was a beautiful balcony from which we watched countless sunsets and one day even lay on our backs to watch a hot air balloon festival, beautiful balloons floating by as we wilted in the heat of, what was then, the hottest summer on record (although I hear that this summer is giving that record a run for its money). 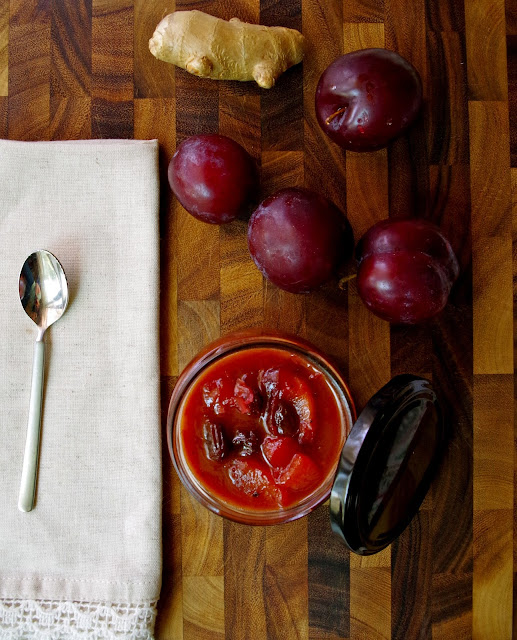 I have a fondness for this city, which boasts Bach and Goethe as former inhabitants. So when I learned that it even more delightfully boasts having once been the home of my dear friend's grandparents, and that the plums she was bringing me rooted her back to Leipzig, I was all the more grateful that she turned back, grabbed those plums from her kitchen table, and was a little late to our tea date.

One might think that this is a lot of pressure on a humble plum. But it, like all the food we eat, comes with a story, sometimes slight (as is the case with my former neighbors' apricot tree) but often rich and full. And I do love all of those stories. 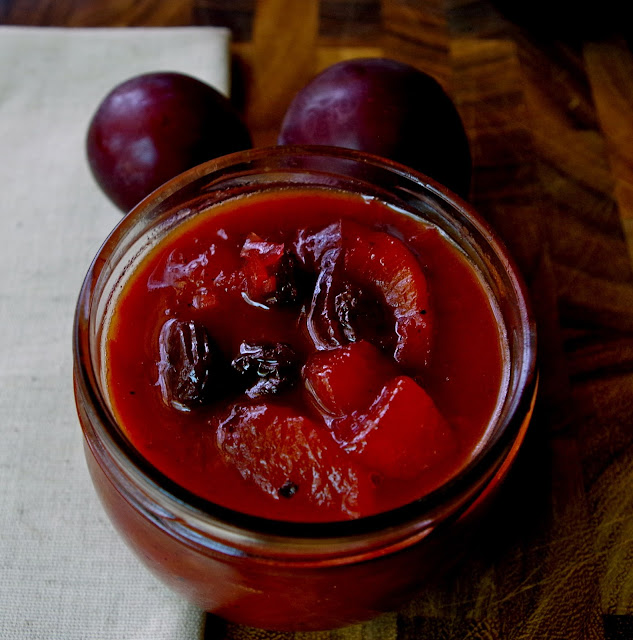 And so, I made a chutney with the Santa Rosa plums (and stood over the kitchen sink while I ate the Green Gage plums for they were so juicy and so sweet--just as William Carlos Williams' poem promises that they will be).

Simple and bountiful, a chutney plays a supporting but essential role in a meal. We served it without much more adornment alongside a marinated and grilled pork tenderloin, but we have enough left over that I am considering using it as part of a grilled cheese sandwich (imagine with me: sourdough, Manchego, arugula, plum chutney). But it would work wonders on a cheese plate or layered between two halves of a wheel of Brie, wrapped in puff pastry, and set in the oven to bake. Or even in a tart with chevre. Now I am just getting hungry again.

No matter the final destination for my second little jar of chutney, I do know that I am grateful for the story of these plums for my friend. Hearing it was a perfect way to reconnect this summer, my new favorite time of year because it's becoming so full now of stories. 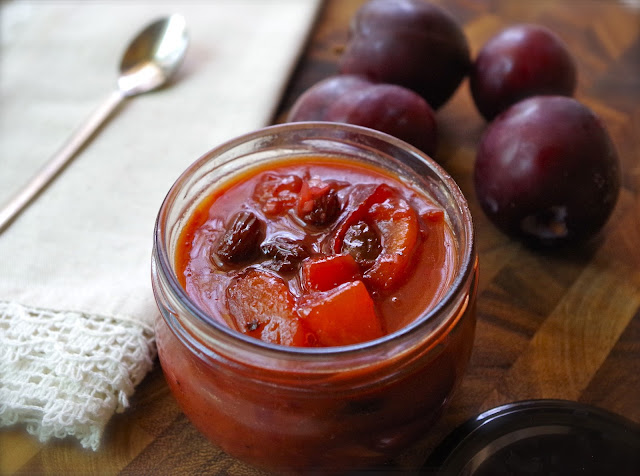 Adapted from  The Thrill of the Grill

Instructions:
1.  In a heavy saucepan, melt the butter over low heat.  Add onion slices and ginger, and cook for 10 minutes, stirring occasionally, until the onion is golden.

2.  Add the brown sugar and stir until fully dissolved.

3.  Add the plums and nectarines, raisins, vinegar, orange juice, spices and salt and pepper to taste.  Simmer over low heat, stirring often for 15-20 minutes, until the mixture is thick. Be careful not to let it burn. Will keep up to 2 weeks, covered, in the refrigerator.
Butter Ginger Nectarines Onions Plums Raisins Sugar The Thrill of the Grill