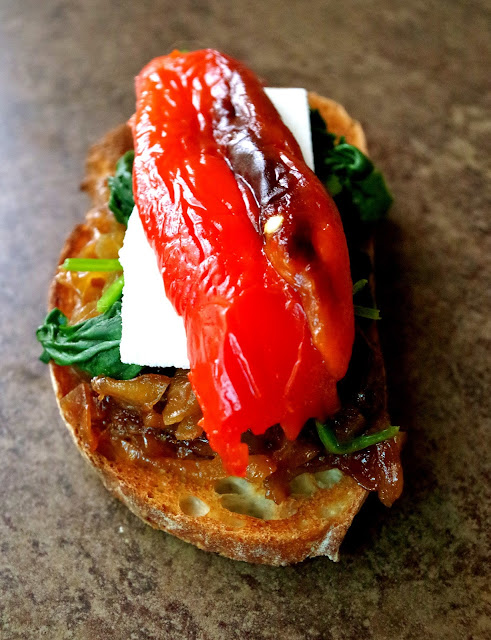 I'll eat kale, sure. I know it has a plethora of health benefits, and prepared properly, it's a mighty fine, if somewhat aggressively bitter, leafy green. However, given the choice, I always reach for the milder, sweeter spinach first. This was not always the case. In fact, like many children, I hated spinach (despite Popeye's proclivity for the leaf that made him super strong). However, like with most things, I have come around, and that picky eating of my youth has been abolished. 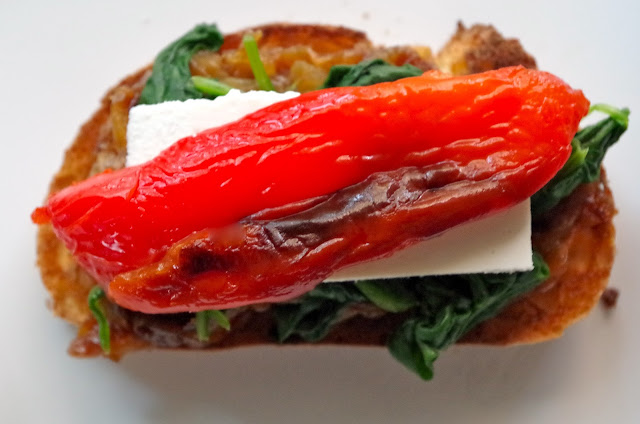 I have detailed earlier the reasons why some people get a chalky feeling on their teeth (blame oxalic acid), and true to form, the husband did profess a little of the chalky feeling. Having never experienced this chalky feeling, I have no real idea of what he's going through. However, I do know that this open-faced sandwich is a light, simple summer supper, and one you can pull together in a snap, especially if you happen to have the roasted red peppers and caramelized onions on hand. My recommendation: always have both of those on hand (advice that I do not always adhere to myself). Without them, this is hardly a meal in under 30 minutes, as simple summer meals are often hyped. But I do promise it is the perfect one for a warm summer's day when you don't feel like having a heavy meal. 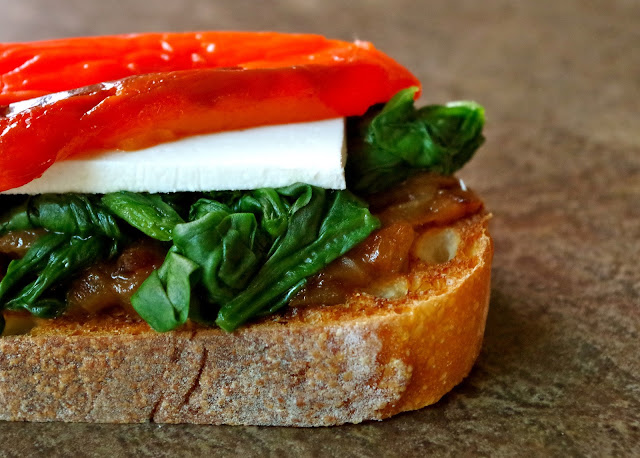 Don't let cookbooks (including the one from which this recipe comes) fool you. Caramelized onions always take longer than you think they will. I have made small adjustments below to the time (because Deborah Madison, our cookbook's author, tries to reasonable about this), and you may decide to not trust even me. I understand. The making of caramelized onions is an exercise in patience. However, that exercise pays off with that sweet, savory taste that smacks of French Onion Soup. Oh so lovely. 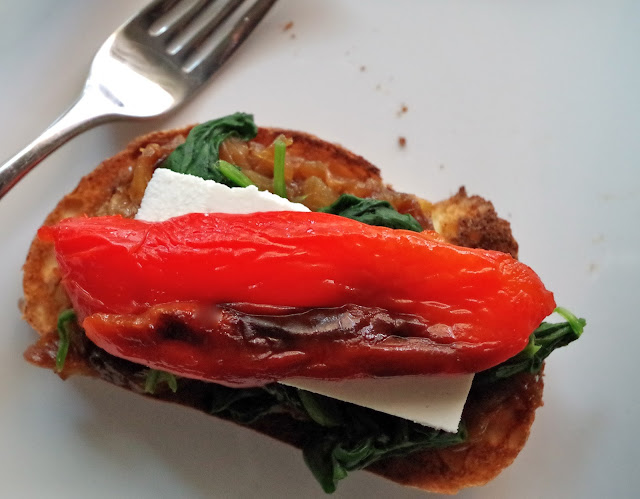 As for the cheese, or any of the veggies for that matter, don't get too caught up in procuring the ricotta salata (the pressed and salted whey of sheep milk) or manouri (the whey leftover from making feta). Any cheese will do--I used ricotta salata, but goat cheese would be delightful in this sandwich I think. Just use what is handy. (I suppose the same could be said of the spinach. For heaven's sake, use kale if you must.) 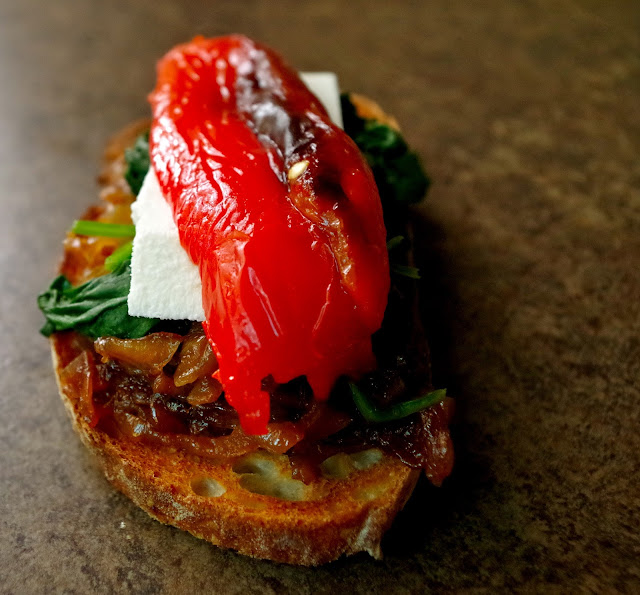 To serve, drizzle some olive oil and be liberal with your salt and pepper. Grab a knife and fork (or throw another piece of bread on there if you want to pick this sammy up with your hands) and dig in. Finally a note about amounts. My lord, you certainly need a lot of onions and a lot of spinach, as both veggies shrink considerably when cooking. So by the time you're done eating dinner, you will feel good and virtuous given the sheer amount of veggies you have taken in. Leaving you all the more room for ice cream. 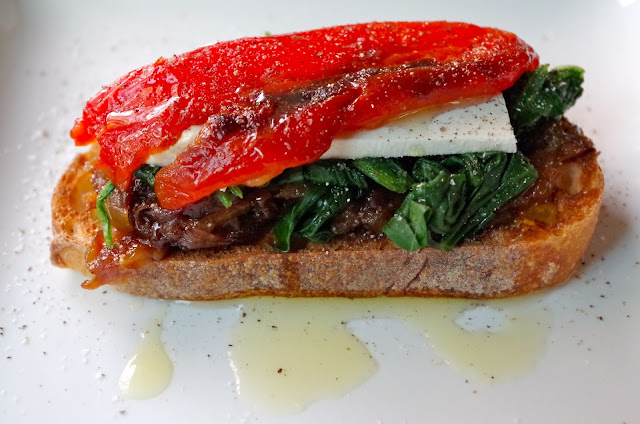 Instructions:
1.  Halve the onions, then peel and slice them thickly, about 1/4 inch thick.  Heat the butter in a skillet or saute pan with deep sides over a medium-high heat.  Add the onions, turn them to coat them in butter and cook, stirring every 5 minutes or so.  After about 20 minutes, the pan will start to sizzle; reduce the hear to low and continue cooking, stirring often, until the onions are golden.  The cooking will take nearly an hour in all.  If you want them even darker, cook them another 30 minutes or so.  When done, season with salt and pepper. **These can be made up to a week in advance.

2.  To roast the red peppers, you can do this on a grill (charcoal or gas), directly over a gas stove flame, or in the oven.  If using the direct flame, set the peppers on the grill over the flame, turning them frequently, until the skins become wrinkled and loose.  (Tongs are the best tool to use for turning.)  If using the oven, you can also roast them in a 400 degree oven or under the broiler--just cut the peppers in half lengthwise, remove the stem and seeds, and press down to flatten them.  Put the flattened peppers cut side down on a sheet pan, brush lightly with oil and roast until the skin blisters.  For all of these methods, roast until the skins are charred and the peppers have collapsed.

3.  To finish the peppers, after you have roasted them, put them in a bowl, set a plate over the top and let them stand for at least 10 minutes, if not longer (the heat and steam loosens the skin).  Once the peppers have steamed, peel or wipe away the skins, remove the stems and seeds (if you roasted them on the grill or over a gas flame). **These can also be made up to 2 days in advance. Slice the red peppers into thick strips.

3.  In a large saute pan, wilt the spinach in the water clinging to the leaves, and then season it with salt and pepper.

4.  Toast the bread, then rub one side with the garlic.  Cover with the onions, followed by the spinach, the cheese, and then the roasted peppers.  Season with salt and pepper, and drizzle with olive oil.
Bell Pepper Bread Butter Cheese Garlic Onions Spinach Vegetable Literacy