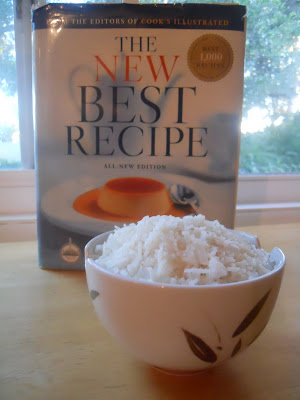 My trip to Illinois was all that I had hoped it would be--filled with good friends and family.  I celebrated love, gave a good toast, danced until sweaty, dragged my nephew around by his ankle (he's five), saw The Last Airbender (again, the young nephew), rode a carousel, was led through Jesse James' hideout, ate French food, held smiley babies, told jokes with my niece (What do you call a boomerang that doesn't come back?  A stick.), and had a martini with my best friend.   I, however, also ate a lot of really unhealthy food.  Potato chips (seriously, you cannot find anything better than  Kitchen Cooked and it's a good thing I cannot find them in California), iceberg lettuce salads, and cheeseburgers.  Ouch.

Since coming home, it's been salmon, mixed lettuce salads, oatmeal, and melon.  Last night, I made Indian food.  Again, Ajanta came through for me with the main dish (a creamed spinach and mushroom explosion of goodness), and I paired it with your basic pilaf-style rice from page 210 of  The New Best Recipe cookbook.  We call this cookbook "The Geek Cookbook."  Designed for the scientist in you, this cookbook walks you through each and every step in minute detail with accompanying line drawings.  If you feel as if you have seen all of this before, you have:  in the magazine Cook's Illustrated. 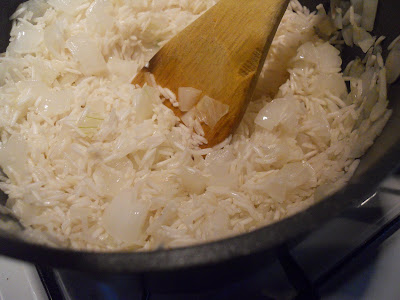 Cook's Illustrated's editor-in-chief and founder Christopher Kimball began the magazine in 1980, and save a four year hiatus, it has been running strong ever since.  In fact, it has a subscription rate of 1.2 million, and before the husband and I became subscribers, we were among the thousands who pick it up while standing in line at their various grocery stores.  In both magazine and cookbook, every recipe begins with a discussion of what can and usually does go wrong with a basic dish when not expertly handled by meticulous, deductive, empirical testing:  too tough ham steaks, too heavy cornbread, hard and dry gingerbread cookies, gluey fettuccine alfredo.   Such a warning to the novice, unscientific cook is followed by the trial and error data collection until the cooks, secreted away in their Massachusetts test kitchen, get it right.  Then they pass their hard earned knowledge on to us.  And we all are the better cooks for it.

And this cookbook, let's face it, is all about science.  What pleases me about cooking is that it equally satisfies my science brain and my artist brain.  Not a true scientist, I am a little too scattered to be a great baker, for such things require precise measuring and perfect timing.  The artist in me prefers the stove top and a pan, for I can pretend that I am measuring or following a recipe, but in reality, I am just making it up as I go along.  And seriously, no two attempts at a dish are ever going to be the same. However, when I want to ensure I can do the basics just right, I come home to the editors of Cook's Illustrated. 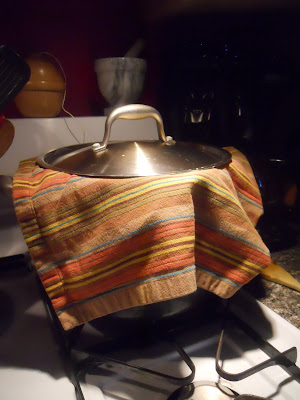 Page 210 in this tome (it boasts 1028 pages!) rests firmly in the "Rices, Grains, and Beans" section.  Nothing flashy here, but sometimes the building blocks of good cooking are surprising in your return to them.  The two takehomes with rice making (which usually I just throw in my aging rice cooker and pray for the best) are these: number 1)  wash your rice before you begin--regardless of your kind of rice.  I have always washed my short-grain rices, a tip I picked up from an ex-boyfriend in the 90s (thank you!), but I have not been prone to rinsing my long-grain rices.  I was surprised at how much starch came off of the basmati.  Lesson learned.  Wash your rice.  And number 2) after you're done cooking the rice (when it has absorbed all the water or chicken stock or whatever), let it rest off the heat with a simple kitchen towel folded in half over the saucepan with the lid on it. Fluffier rice will follow.  Guaranteed. 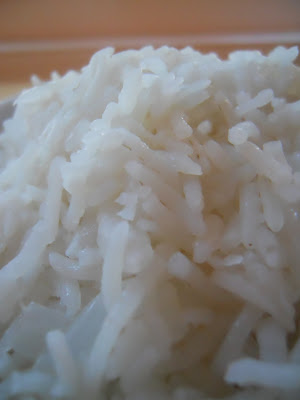 Finally, the narrative at the beginning of this recipe explains the difference between pilaf-style and pilaf.  Pilaf-style refers to any long-grain rice that has been cooked in hot fat (oil or butter) before being simmered in liquid (water or stock).  The more substantial pilaf has the same cooking process (hot fat, hot liquid) as well as the additions of nuts, spices, dried fruits, meats.  After the Pilaf-Style Rice recipe, page 211 lists three pilaf variations (with Currants and Pine Nuts, Indian-Spiced with Dates and Parsley, and Vermicelli (think Rice-A-Roni)).  However, I wanted to go with your most basic recipe this time around, and in the end, this was truly a nice, light, buttery, toasted side-dish.  Hurray for science!

Instructions:
1.  Place the rice in a medium bowl and add enough water to cover the rice by 2 inches; using your hands, gently swish the grains to release excess starch.  Carefully pour off the water, leaving the rice in the bowl.  Repeat 4 to 5 times, until the water runs almost clear.

2.  Bring the 2-1/2 cups of water or stock to a boil, covered, in a small saucepan over medium-high heat.  Add the salt and season with the pepper to taste; cover to keep hot.

3.  Meanwhile, heat the butter in a large saucepan over medium heat until the foam begins to subside; add the onions and saute until softened but not browned, about 4 minutes.  Add the rice and stir to coat the grains with butter; cook until the edges of the grains begin to turn translucent, about 3 minutes.

4.  Stir the hot, seasoned water or stock into the rice; return to a boil, then reduce the heat to low, cover, and simmer until all the liquid is absorbed, 16 to 18 minutes.  Off the heat, remove the lid, and place a clean kitchen towel folded in half over the saucepan; replace the lid.  Let stand for 10 minutes; fluff the rice with a fork and serve.
New Best Recipe Cookbook Rice