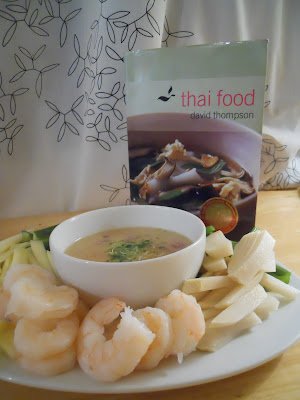 I am a little in awe of this cookbook.  David Thompson, an Australian chef and restaurateur, lived for several years in Bangkok, and his expertise in the food, city, and culture is abundantly clear in this tome.  There has been some bruhaha about Thompson, a foreigner, suggesting that he was reviving Thai cuisine; such a statement perhaps needs context.  He's certainly bringing it to Western kitchens, and well, Westerners for the most part like their ethnic cuisines digested by someone else--the French got Julia, the Moroccans got Claudia, the Mexicans got Diana.  Thompson is merely in a long line of chefs who are passionate about a cuisine that is not from their native homes.  And I cannot fault him for that.

Instead, I will take advantage of it, and for a hefty 688 pages Thompson wants to ensure you learn a thing or two about the origins of the food.  In fact, the opening chapters are devoted to the history of Thailand, the influence of Buddhism on all aspects of the culture, and an overview of each region of the country.  He devotes a full 19 pages to a discussion of rice, just before launching into a glossary of Thai foods that may be unfamiliar to the Western cook and intricate details about those that are more recognizable.  So, while Thompson is not native-Thai, he certainly knows his stuff.  By the way, the book weighs in at a solid four pounds eight ounces on my kitchen scale. 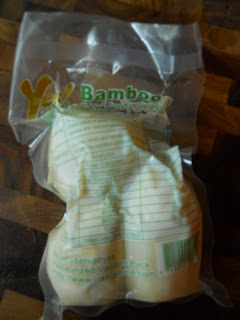 Thompson isn't for the faint-hearted, and some might even look askance at the beginning-Thai cook using Thompson as a first foray into the cuisine, but I am not afraid of a little galangal. By all means, I don't consider myself any sort of expert at Thai food, but I do love to eat it, and this book makes the cooking of it almost obsessive compulsive.  However, if you're the owner of the only Michelin-star-rated Thai food restaurant in all of Europe (nahm), then you're going to ensure you do it right.  Even for the novice.  So take Thompson's hand; he knows where to lead you.

Thompson insists on authentic ingredients, but he does tell you what you can substitute if need be.  Luckily, I have a couple of great grocers in the area who carry most of what I need, and the husband and I planted our own kaffir lime tree just so we could be sure to have kaffir limes at a moment's notice.  I suppose that there are a multitude of other things we should probably be better prepared for--the eventuality of a devastating earthquake, retirement--however, lime leaves at your fingertips seemed most pressing, indeed. 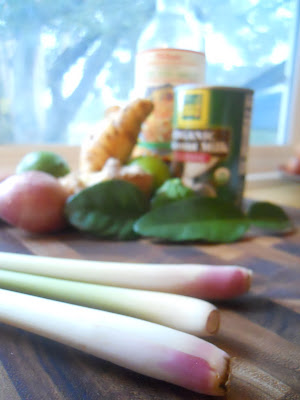 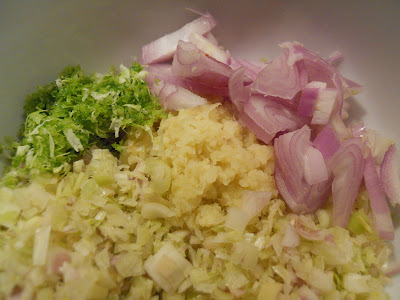 Okay, let's get down to business here.  Lon means to simmer or stew normally in coconut cream.  Nearly always lon is made with a fermented, salted or pickled ingredient--from fermented yellow beans to cured pork to even ants' eggs.  This one is made from the more readily available and presumably palatable pla raa (or fish sauce).  Here's a good little article on fish sauce in the Bangkok Post that I couldn't resist.  Thompson suggests that the lon dishes date from the 13th century when the Thai entered the regions where coconuts were grown, thus making them a northern Thai dish. 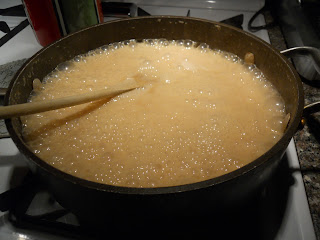 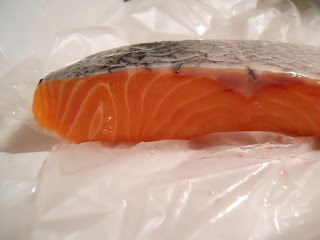 Thompson suggests serving this particular lon with strong-tasting raw vegetables (rose apple, cucumber, green mango, green beans, apple eggplants), boiled vegetables (particularly bamboo shoots and apple eggplants), steamed shrimp, grilled fish, fish cakes, or deep-fried pork. I went the route of raw veggies (cucumber, green mango, and green beans), bamboo shoots, and steamed shrimp with a side of rice.  In all,  we found the lon a bit salty.  Okay, a lot salty.  I wonder if perhaps a more seasoned chef would have chosen a different brand of fish sauce, for the one we used was a little, umm, intense.  I suspect this was a case not of Thompson leading me astray but of my Western taste buds not being ready for the power-pack punch that is lon.  But if you love salty, fishy, sour goodness, this is the recipe for you. 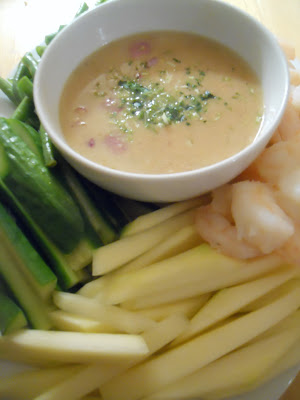 Instructions:
1. Bring fermented fish sauce and coconut cream to a boil.  Simmer and reduce until quite thick.  Add the tablespoon of sugar and the minced fish.  Stir in galangal to lime juice.

2.  Season with additional sugar, fish sauce, or coconut cream to taste.  Occasionally, a pinch of salt is recommended to ensure you don't use too much fish sauce and overwhelm the coconut cream.   Serve with shredded lime leaves.
Coconut Cucumber Fish Green Beans Mango Thai Food (by David Thompson)