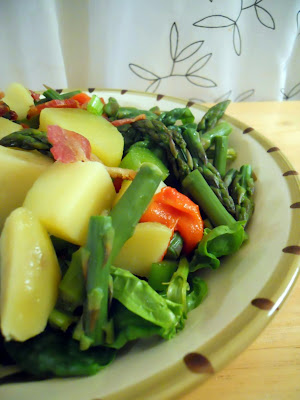 This recipe is so full of spring, so full of vegetables.  And I am ready for spring.  In California, the pear trees are starting, just starting, to bloom.  The painful unfolding from a dormant winter is beginning.  T.S. Eliot said, of course, that "April is the cruelest month, breeding/Lilacs out of the dead land, mixing/Memory and desire, stirring/ Dull roots with spring rain."   As he hailed from the East, his spring happened in April, ours in March.  But that coming out of dull winter is always welcome and painful. 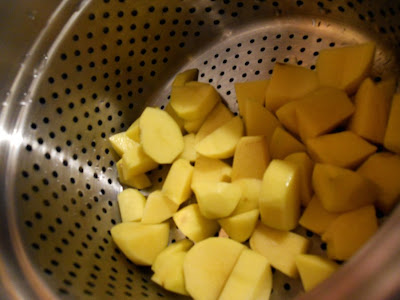 In the past week, I have been to Illinois (where the winter sky is perpetually the color of slate) and back to see my dad.  He's doing better, although things are still touch and go.  After my harping--or perhaps in spite of it--he's trying to make some pretty big lifestyle changes, including quitting smoking (as of yesterday, he is a 6-day non-smoker!) and eating healthier. 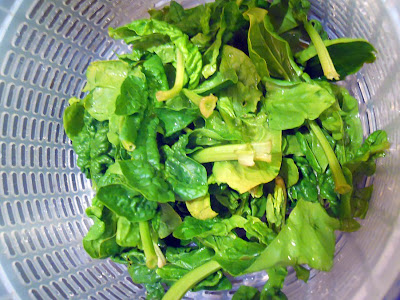 And this recipe might be just the right one for him.  While the bacon and the bacon fat are, um, intense, you could easily cut down to just the bacon crumbles and use an additional tablespoon of olive oil, or you could cut the bacon entirely and sprinkle walnuts or pecans over the top for some crunch.

However, I used bacon.  Sweet, sweet bacon: Marin Sun Farms opened a butcher shop at Market Hall, and the other day when I walked in, they were frying up some of their smoked bacon.  Sweet jesus.  It was sort of the siren smell of bacon, and I could not resist. 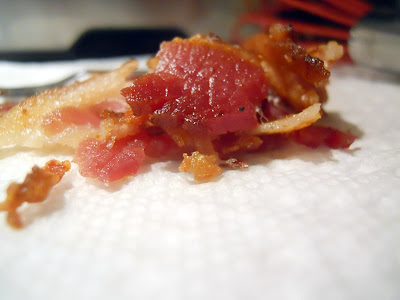 The original recipe (which you can find in the link to Bon Appetit below) did not have asparagus in it, but asparagus screams spring.  And I am really ready to scream spring, even if it comes with bacon.  In the end, no matter how you go about this salad, let it usher in the spring with all of its painful optimism, wherever you are. 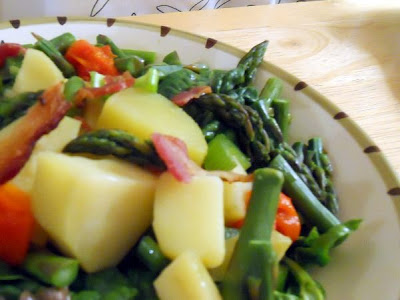 One Year Ago: German Apple Pancake

2.  Steam  asparagus until tender, about 4 minutes.  Transfer to bowl with potatoes.

3.  Roast the bell pepper in broiler until blackened on all sides. Enclose in paper bag; let stand 10 minutes. Peel, seed and chop pepper. Transfer to bowl with potatoes.

4.  Meanwhile, sauté bacon in small skillet over medium heat until crisp, about 3 minutes. Using slotted spoon, transfer bacon to paper towel and drain.  Once cool, break or cut into pieces.

5.  Whisk vinegar, oil and garlic in skillet with the bacon fat. Stir over low heat just until warm, about 1 minute. Stir in bacon.

6.  Plate the spinach; then, pour the warm vinaigrette over the spinach. Top with celery.  Add the potato, pepper and asparagus mixture.  Season to taste with salt and pepper and serve.