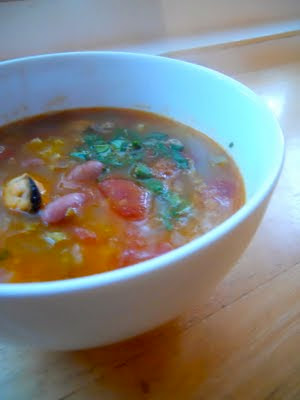 To many the mussel doesn't seem adventurous.  However, to this Midwest-raised woman, any seafood beyond the bluegill and the catfish was adventurous.  My father, however, taught me how to expand my culinary horizons.

My parents divorced when I was still young, only seven or eight years old.  While such an event is often traumatic for children, it was a bonanza for me.  It meant three hours in the car with my father as a captive audience every other week.  It meant a stepsister, who taught me how to shuffle cards so they made a satisfying fluttering sound.  It meant trips to the top of the Sears Tower where I felt small and insignificant and wobbly and but also a little sick to my stomach from vertigo.  And sometimes, during those weekends, it meant a trip to a family-owned pizza joint, name of which escapes me, near the Fox River that served your standard fare of pizza, but also offered octopus and squid as topping options.  My brother, sister, stepmother, and stepsister all turned their noses up, but my father and I would order a pizza laden with little rounds of octopus and squid tentacles, and I would relish being the only other person who liked the chewy texture of cephalopods.  He taught me to order with some abandon from a menu, even if you're in a landlocked state. 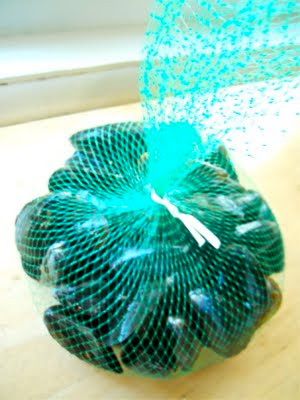 Mussels, of course, are not cephalopods, but they are from the same class Mollusca.  And boy, can they be tasty.  Europeans are more enamoured of our bivalve friends than Americans are.  But I say, let's bring more of these blue-shelled friends into our diet. When you buy mussels, choose those that have tightly closed shells and are not broken.  Also avoid the mussels that are heavy, which means they're full of sand, or that are loose when shaken, which means that mussel is long dead.  Smaller mussels are more tender than their larger counterparts, and all mussels should be used within a day (or two on the outside) of their purchase. 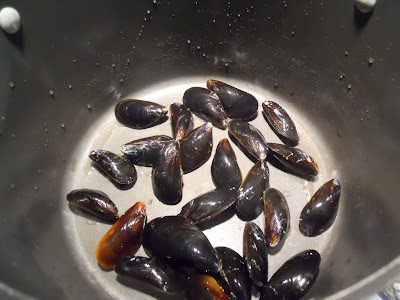 Cranberry beans are these beautiful beans with large, knobby beige pods splotched with red.  The beans themselves are cream with red streaks and have a nutty flavor.  During one summer in Italy, we saw that farmers market boats sold them along the canals of Venice.  Should you be lucky enough to find them at your farmers market, snap them up.  Or better yet, grow your own if you can.  With fresh beans, you can skip all the hassles of reconstituting them, but with dried beans you guarantee that you can make this little soup all year long.


For many of you, the mussel is not an adventure.  The cranberry bean is abundant and already a staple in your diet.  But for this Midwesterner, this soup feels decadent, delightful.  It feels like Europe (cranberry beans) and the West Coast (abundant seafood) and Illinois (adventurous eating with my father) all rolled into one.  It is a surprisingly good, hearty and not at all fishy soup. Perfect as we finish off summer and enter into fall. 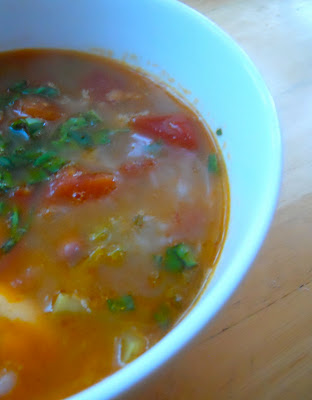 Instructions:
1.  Reconstitute the cranberry beans by covering them with lukewarm water and soaking them overnight or no less than 6 hours before cooking them.  Drain.  Put the beans in a saucepan with enough water to cover by at least 2 inches.  Cover the pot and simmer over medium low heat until the beans are tender, about 50-60 minutes.

2.  Soak the mussels in several changes of cold water, scrubbing them vigorously each time with a stiff brush.  Cut off any protruding whiskery tuft.  Discard any mussels that do not clamp shut.  Put the mussels in a large saute pan in a single layer (if all of the mussels do not fit, steam them in batches).  Cover the pan and turn to high heat.  As soon as the shells open, transfer them to a bowl and set aside, pouring over them any liquid they may have shed.  Discard any mussels that do not open.

3.  When the mussels are cool enough to handle, detach the meat, discarding the shells.  Work over a bowl so as to catch any liquid from the mussels.  When you have shelled them all, put the mussel meat in a separate bowl and pour any retained liquid over the meat, being very careful not to pour with it any sand that has collected at the bottom of the bowl.

4.   In a large saucepan (large enough to contain all of the beans and mussels later), put in the olive oil and chopped onion.  Without covering the pot, cook the onion over high heat, stirring from time to time, until it becomes colored a deep gold.  Add the garlic, taking care not to let its color become darker than pale gold.

6.  Drain the cooked beans, but save their liquid, and add them to the pot.  Turn them over with the other ingredients for 2-3 minutes.

7.  Add enough of the beans' cooking liquid to achieve a soupy, but not too runny, consistency.  Stir well, turn the heat down to low, taste and correct for salt, add liberal grindings of pepper, and simmer gently for 10 minutes.  Just before serving, stir in the shredded basil.