In addition to the Baba Ghanouj that I made for the book club meeting, I made this little quinoa dish.  Life has been insane (as I will detail in an upcoming post), but two months ago I not only made this dish, but it also comes from a cookbook that I have not used here before. 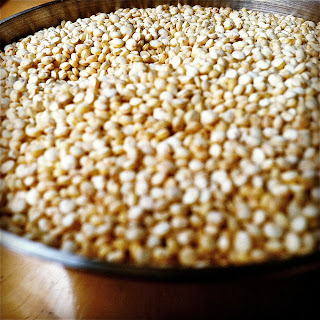 I received this lovely book as a Christmas present--and the great news is, this recipe isn't even on page 210, so you know you will be seeing this cookbook here again!--and I am delighted by it and its premise.  Maria Speck, the cookbook's author, is a food journalist and culinary school instructor in addition to writer of this fabulous book.  Greek and German by upbringing, she provides a Mediterranean flair to a Northern European focus on whole grains. And in our current climate of whole-grain-and-sometimes-gluten-free cooking, this cookbook is a nice addition to the culinary bookshelf. 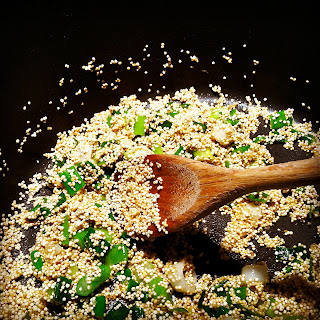 An ancient Andean crop, quinoa is actually a seed not a grain, but it cooks up like a grain does, so it often just gets lumped in with the plethora of other grains out there.  Further, quinoa is pretty high in protein--that's a bonus for our vegetarian friends out there, but you already knew that--and it's high in calcium.  But here's my favorite part about quinoa--next year (2013) is the Year of Quinoa, as declared by the United Nations.  Isn't that kind of awesome?  According to the resolution adopted in December of 2011 (agenda item 25 of the 66th session!), such a resolution recognizes "the Andean indigenous peoples [who], through their traditional knowledge and practices of living well, in harmony with nature, have maintained, controlled, protected and preserved quinoa in its natural state, including its many varieties and landraces"  and supports the need to "focus world attention on the role that quinoa biodiversity can play, owing to the nutritional value of quinoa, in providing food security and nutrition and in the eradication of poverty."  Sweet business.  That's a lot of pressure on a seed treated like a grain.

But I think quinoa can handle it. 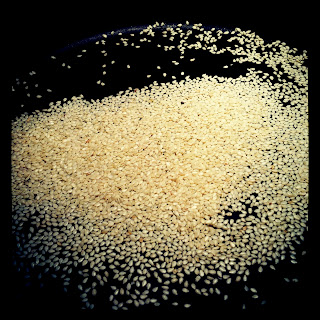 In this little recipe, which is only one of a multitude of ways to cook quinoa, here are a couple of little tips. 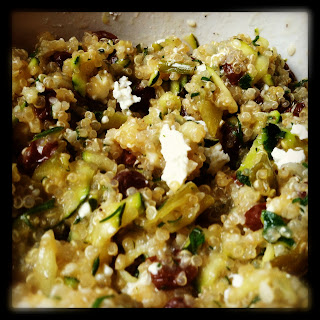 So play away, and enjoy your ancient grain (even if it's not the year of quinoa just yet) made in a modern way. 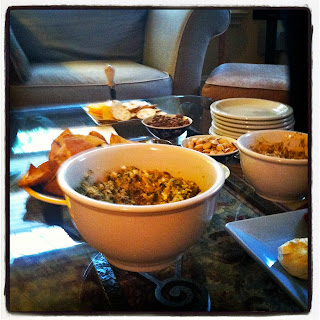 Instructions:
1.  Heat the olive oil in a medium saucepan over medium heat, then add the green onion and 1/4 teaspoon of salt.  Stir frequently, until the green parts of the onions dark green but do not brown.  Add the quinoa and cook until the gran begins to crackle and tun brown (about three minutes).  Add water (or broth), currants,, and remaining salt, and bring to a boil.  Decrease the heat, cover, and cook until the water is absorbed, about 20 minutes.

2.  Finely grate the zest of the lemon and squeeze the lemon until you have 2 tablespoons of lemon juice.

3.  When the quinoa is finished, remove from the heat.  Stir in the lemon juice, zucchini, sesame seeds,  dill, feta, and pepper.  Taste and adjust seasonings.  Cover and let sit for 3 minutes.  Garnish with additional lemon zest, sesame seeds, or dill, and serve.