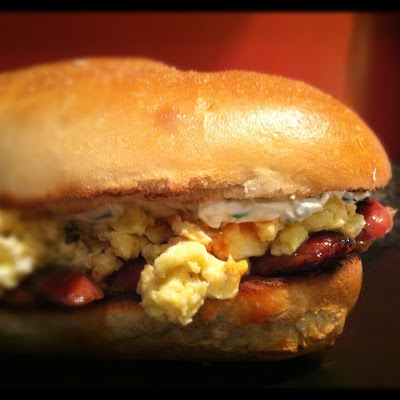 Are you hungry?  Because this breakfast bomber will fill you right up.

As part of The Super Awesome Cover-to-Cover Challenge (from Bitten Word, a lovely little website where two fabulous writers take it upon themselves to cook from a plethora of cooking magazines each week), I am cooking a rather colossal hero sandwich from The Food Network Magazine.  Our fearless leaders have called upon their readers (that's me! (among many others)) to help them cook every recipe from one of the October food magazines.

Part of a presentation from Jeff Mauro, the self-proclaimed Sandwich King, on game-day subs, this bomber combines cream cheese with scrambled eggs and chicken apple sausages.  This makes a fabulous breakfast/brunch on game day, and these days, when you're living in the Bay Area, you need a lot of game day fuel.  (There is a lot of heartbreaking going on, what with the A's and all; however, one needs energy to root on the Giants.) 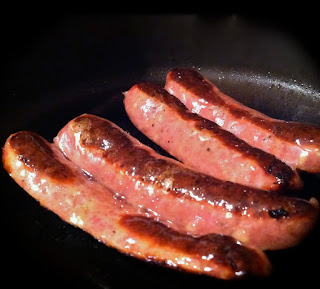 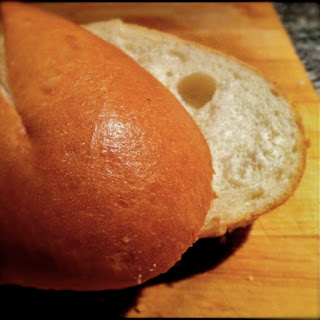 I have a soft spot for the hoagie, the sub, the grinder, what you will.  In the big city near my little hometown in Central Illinois, there's a great little sandwich shop, Hungry Hobos (name of which may have been recently changed to Boxcar Express).  But back in the day, when one was not in the mood for the best taco pizza ever at Happy Joe's, one simply headed next door for a sub.  Now, people get quite up in arms and quite regional about their nomenclature for the long, skinny sandwich.  Is it a grinder only if it's heated?  A hoagie when it has a little of everything on it?  A sub when it has only one kind of meat?  A hero if it's served cold? A Po' Boy if you're from the South?  I'll leave it up to you to duke it out during the 7th-inning stretch.  In the mean time, some thoughts on this massive sandwich... 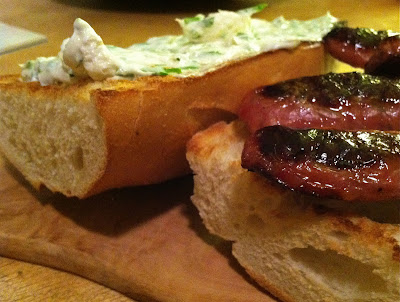 Despite being incredibly rich, this bomber was tasty.  It's eggs, sausage, and toast, people.  You cannot go wrong with that.  The eggs are a bit heavy with both half-and-half and Swiss cheese (a whole cup!) and the amount of cream cheese a little overwhelming.  However, the simple basics are ones we can get behind.  Play with the proportions of the cream cheese, try milk instead of half-and-half, and dash on the hot sauce.  This might be the hoagie for tonight's (somewhat heavy) dinner.  Especially if you have, as I do, a nephew who refuses to eat anything besides breakfast food.  A sure fire way to ensure that breakfast is what's for dinner. 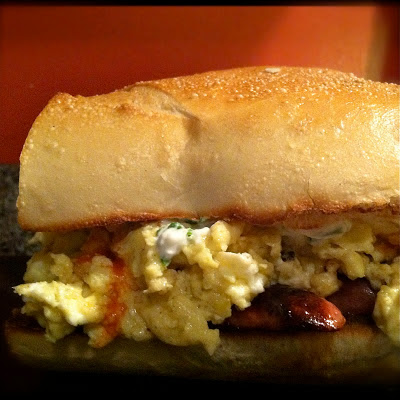 One Year Ago: Roast Pork with Onion-and-Apple Marmalade

3.  Partially split each sausage lengthwise, cutting about three-quarters of the way through, then open the sausages so they lie flat. Heat the olive oil in a 12-inch nonstick skillet over medium-high heat. Sear the sausages until golden, about 3 minutes per side. Set the sausages aside and wipe out the skillet.

4.  Whisk the eggs, half-and-half and 1/4 teaspoon each salt and pepper in a bowl. Melt the butter in the skillet over medium-high heat. Add the egg mixture and stir with a rubber spatula until just set on the bottom, about 1 minute. Reduce the heat to medium low, add the Swiss cheese and stir until the eggs are cooked.