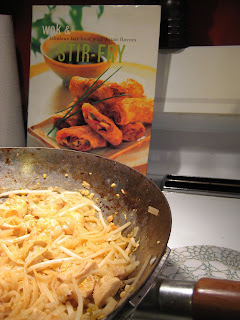 I bought this cookbook because we own a wok.  We don't need a wok.  And yet, there it is, taunting us.  So I acquired this cookbook in an attempt to toss together some fast recipes.

It was bound to happen.  This one was a dud.  While this faux- (pho?) Phat Thai (Pad Thai) is a fine weeknight meal, it pales in comparison to real Phat Thai, and so this meal is just plain sad.  True Phat Thai has tamarind sauce and more sugar and lime juice, but this one was bland, boring, tame.  So if you feel inspired to make this, double, nay triple (okay, maybe not triple), all the yummy sauces because that's what makes good Phat Thai.   That wonderful blend of salty, sweet and sour.

Apparently Phat Thai was originally brought to Thailand from Vietnam, became a cheap staple for the working people, then morphed into the go-to-food for busy Bangkok businessmen and women, converted itself into a night market staple, and then evolved into the most popular Thai dish in America.   The husband and I are huge fans of Thai food.  We used to live in Richmond and often on weeknights would head to San Pablo Avenue to a great little Thai place:  I am not sure I ever knew the name of the place.  All I know is that they had plastic coverings over the tables, handwritten specials on faded construction paper, and an elaborate aquarium that dominated the room.   They always served my favorite starter, shrimp chips (seriously, the best shrimp-flavored Styrofoam ever),  and always had some ridiculous salmon curry and an astonishing coconut ice cream for dessert.   Go ahead and pit any no name Thai place against any fancy-shmancy Thai restaurant, and the no name place will almost always win. 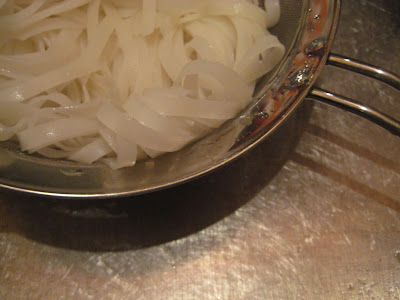 While the low budget restaurants will surely win, the low budget cookbooks do not.  In the future, I will be cooking from the best Thai cookbook that has been written:  Thai Food.  It’s author, David Thompson, is heroic, but much more about that cookbook later this year.  Instead, tonight’s cookbook did what it needed to do:  it produced a quick and easy, albeit underwhelming, meal.  But the next time we make Phat Thai, we'll crack open the Thompson book or head up to Richmond. 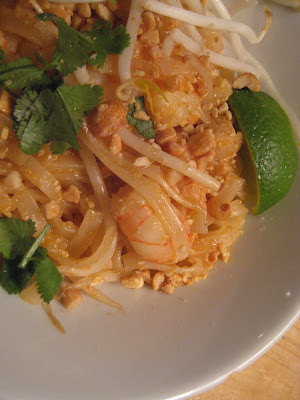 Instructions:
1. Place the rice noodles in a large bowl, cover with warm water, and soak for 30 minutes until soft.  Drain.

2.  Combine the water, fish sauce, sugar, lime juice, paprika and cayenne in a small bowl.  Set aside until required.

3.  Heat the oil in a wok.  Add the garlic, and fry for 30 seconds until it starts to brown.  Add the chicken and shrimp, and stir-fry for 3-4 minutes until cooked.

4.  Push the chicken and shrimp mixture in the wok out to the sides.  Break the egg in the center, then quickly stir to break up the yolk.  Cook over a medium heat until the eff is just lightly scrambled.

5.  Add the drained noodles and the fish sauce mixture to the wok.  Mix together well.  Add half the crushed peanuts, and cook, stirring frequently, until the noodles are soft and most of the liquid has been absorbed.

6.  Add the scallions and half the bean sprouts.  Cook, stirring, for one minute more.  Spoon onto a platter.  Sprinkle with the remaining peanuts and bean sprouts.  Garnish with the cilantro and lime wedges, and serve.
Chicken/Poultry Noodles Shrimp Wok & Stir Fry