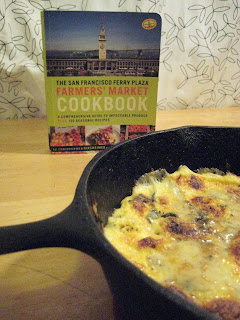 Okay, tell me that when you read that recipe title, you didn't just do a double take.  That's what I did.  In fact, I may have gasped, "Flan?  Isn't that a fantastic Mexican dessert?  Why does it have the words Swiss Chard in front of it?"

Times like these, I wonder why I ever chose page 210.  What had I gotten myself into?


I guess I had to make Swiss Chard Flan.

Luckily, this flan didn't come with a crème caramel topping or a puff pastry shell.  In fact, it was a remarkably savory bit of tasty goodness.

The husband is not a fan of the runny egg--so much so that he orders poached eggs as well done as possible--so we had to make some modifications to this one.  I decided not to make this really a flan; I made it a frittata instead.  A little less wiggle and a whole lot more happiness from everyone involved.  Besides, it just sounds a little more appetizing.  Swiss Chard Frittata.

But before we begin cooking, let's begin with the swiss chard shopping.  This recipe is one for those of you with a CSA or a local farmer's market.  Currently greens are in season and will be for another couple of weeks:  Swiss chard, kale, collard greens, mustard greens, you name it.  We're always looking for new ways to cook them.  A year ago the husband and I signed up for a CSA box (a little shout out to Full Belly Farm!).  Every week, we were inundated with fantastic produce.  But the sheer amount was a little overwhelming.  Seriously. The greens.  And the root vegetables.  We had to stop the box (long, terribly uninteresting story), but luckily we live a block (down a really cute path) from our local Sunday farmer's market and a BART ride away from the Saturday San Francisco Ferry Building farmer's market.  So this past Sunday the husband and I grabbed the umbrella and put on our hoodies to walk down to the local farmer's market.  While rainy, the market was filled with color, including some of the first tulips of the season. 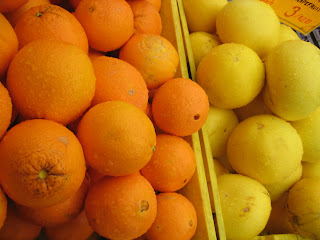 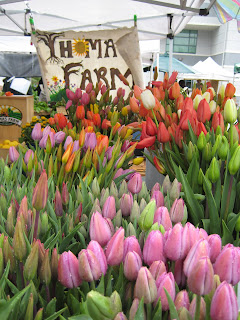 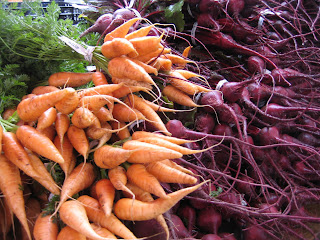 We wandered around, sampling the strawberries (?) and apple cider and ducking under the awnings to avoid the rain.  After shivering for about twenty minutes and pricing out the best chard, we came away with our requisite two bunches of the rainbow variety.

This recipe comes from a cookbook that encourages local, in-season cooking.  The Ferry Building's farmer's market is pretty phenomenal.  According to their website, around 15,000 people venture into the building and its surrounding plaza to select their local fruits, meats, and veggies every Saturday.  Pop into Cowgirl Creamery, and it's a complete morning.   The San Francisco farmer's market hasn't been around that long.  In its current incarnation, it has been open only since 2003, but it feels as if it has been there forever.  It does stem from an earlier form, opened in 1992, after the Embarcadero and the waterfront were revitalized after the Loma Prieta earthquake.  Out of tragedy comes triumph.  Or at least really good food.

The cookbook itself is organized by season, which is pretty handy, and has beautiful pictures.  You can tuck it into your canvas bag and walk around any farmer's market's stalls, determining if you really need that parsnip.  But my favorite feature about this cookbook is that it gives you a full rundown of how to store and prepare all of the fruits and veggies.  We found this exceptionally handy when we got those huge amounts of radishes, rutabagas, radicchio and rhubarb from the CSA.

Okay, now back to the recipe: 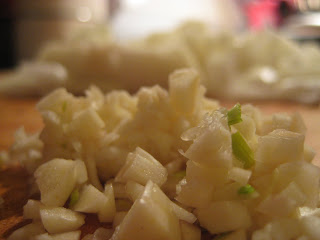 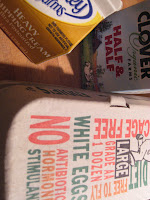 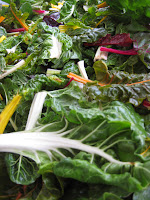 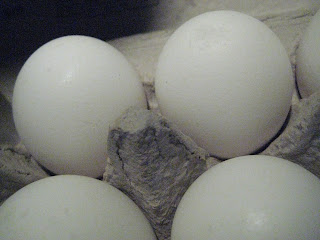 This was surprisingly good.  I added an egg to the original recipe and reduced some of the dairy products (they called for 1.5 cups!).  Normally, when I make a frittata, I make it a little less fat, and I think you could make some modifications to what you'll find below (low fat milk would be where I would start).  But most importantly, we have rediscovered that if you cover anything with eggs and cheese, you really cannot go wrong. 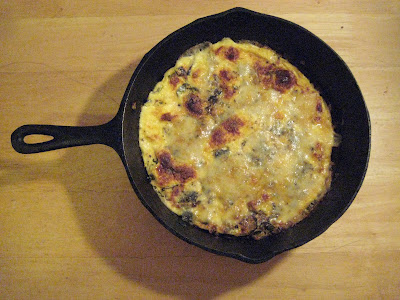 Instructions:
1.   Heat enough olive oil to coat the bottom of an oven-proof skillet (we used a wrought iron skillet, our go-to skillet for frittatas)  Add the onion and garlic and coo, stirring occasionally, until tender and translucent, about three minutes.  Add the Swiss chard leaves, cover and cook for about 7-10 minutes.  If the mixture becomes too dry, add a few splashes of water.

2.  While the chard cooks, crack the eggs into a bowl and whisk in the cream and half and half.

3.  Preheat the broiler.  When the chard is ready, remove from heat and season to taste with salt and pepper.  Spread the chard mixture out evenly.  Pour the egg mixture over the chard and season with salt and pepper.  Reduce the heat to medium-low and cover.  Cook until the mixture has just set, about ten minutes.  As the mixture cooks, occasionally pull the edges away from the skillet to ensure even cooking.

4.  Remove the flan from the heat and sprinkle the cheese evenly over the top.  Cook the flan under the broiler to brown, watching the flan carefully so it does not burn.

5.  Remove the flan from the broiler and loosen the edges with a knife or spatula.  If the flan still seems too loose, return it to the broiler to another minute.  Serve directly from the pan, cutting it into wedges, or slip it onto a serving plate and then cut into wedges.  Serve warm or at room temperature.
Chard Cheese Cream Eggs Garlic Onions San Francisco Ferry Plaza Farmer's Market Cookbook