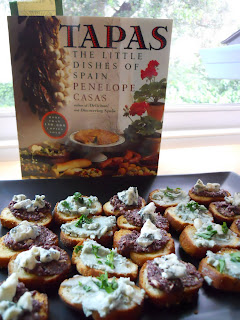 Adapted from Cookbook #16:  Tapas:  Little Dishes of Spain (1985; there is a new updated version now in hardcover)

Quite simply, I want to go to Spain.

I almost went once, many years ago.  I had elaborate plans for New Years Eve in Barcelona after Christmas in Chamonix where I was supposed to be after a week in Paris.  But then the train unions in France went on strike, and I couldn't imagine shuttling around France and eventually over to Spain any other way (I lacked imagination at 21).  I called the whole trip off, instead spending another week in London, where I made a fool of myself over some boy named Warwick (like you do at 21).  But I had plans, such wonderful, elaborate plans for Spain with its little dishes of salty foods. Instead, I have to recreate these fantasy dishes at home or find them in Berkeley and Oakland.  It's not Spain, but it will have to do for now.

Around these here parts, we have two favorite tapas restaurants:  Fonda and Barlata.  Fonda has been the home of many a birthday celebration or out-of-town-guest excursion.  I love the brunch on the weekends and the open brick wall (not often seen in the Bay Area--seeing as we have earthquakes and all).   However, it is Barlata that has recently made the husband and me two exceptionally happy people.  For two reasons:  the restaurant is within walking distance and they have happy hour.  The family-style seating, the optical-illusion sink in the women's bathroom, the fantastic art (photographs?  paintings?  paintings of photographs? prints?  prints of paintings of photographs? hard to tell), the guest-chef nights, the oxtails on mashed potatoes, the salty peanut bark--all help with our devotion to this new Temescal restaurant.  But like I said:  happy hour, walking distance. 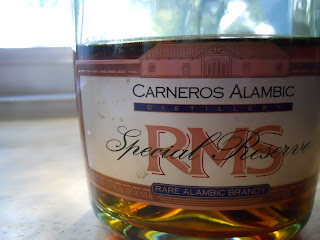 When our wallets cannot afford the trip to Barlata, we have to make our own tapas.  I recently acquired this cookbook written by Penelope Casas, who is a fantastic and inspiring lover of all Spanish foods.  We went to Moe's Books in Berkeley where we wanted to pick up Casas' now-out-of-print Delicioso!, which a family member of ours taunts us with because he owns it and cooks amazing food from it.  However, the bookstore didn't have that cookbook, but they did have this one, so I snapped it up.  I almost felt guilty paying only 12 dollars for it.  Almost.  The cookbook includes a list of potential tapas menus and a now (probably) outdated list of recommended tapas bars in the US and Spain.  Of course, the list was well before the late 1990s tapas craze.  And to boot, page 120 (page 210 is firmly planted in the index) has not one, but two blue cheese tapas recipes! 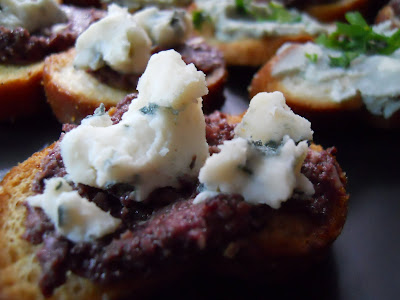 Tapas are not meant to be eaten "on the run"--indeed, while tapas are quickly consumed (since they are, by definition, small portions on small plates), they are meant to be part of a long conversation between bar patrons:  A little food.  A little conversation.  A little more food.  Even more conversation.  Thus, it seemed fitting that I serve some tapas for my first book club meeting Wednesday night, where I served the Blue Cheese with Brandy (with a whole host of other munchy things, but people kept reaching for this one).   The company and conversation were fantastic, and let's just say the food was far better than the book--The Adventures of Augie March, a book that was desperate for a good editor.   While there was no evident connection between Saul Bellow and Spanish cuisine, it helped to have something edible since the storyline was not.  (Although due to the well-versed arguments of four other very smart and thoughtful readers in the book group, I have reconsidered some of my impassioned views on this book. ) 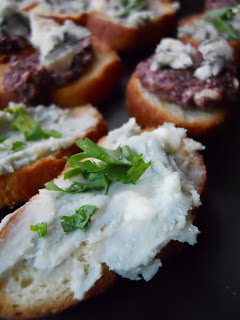 Then I saved the Olive and Blue Cheese Canape for tonight, when the husband and I spread out a full-on tapas repast (which we shared with the Delicioso! owner and watched Treme--seriously, have you seen it?).  This sort of banquet of little plates is not in the Spanish tradition, where tapas is meant to tide you over until dinner; however, Americans have full well adopted the tapas as a meal. You know that a food has become American mainstream when it is included in The Joy of Cooking, where Irma Rombauer explains that the word tapas comes from the verb tapar, to cover in Spanish.  She goes on to note that tapas originated in the 19th century in Andalusia:  "Andalusia is sherry country, and the story is that drinkers in local taverns took to placing slices of bread atop their glasses between sips to keep the flies out... Some enterprising bartender then put a slice of ham or sausage on the bread.  Soon tiny plates were being used as covers and a variety of foods were spooned onto them."  This may or may not be true, as other places make other equally interesting claims (disease cure! labor extender!).  But I like this idea nonetheless. While we did not use our plates to cover our sherry, we certainly enjoyed the asparagus wrapped in ham, the marinated mushrooms, the salted cod with potatoes, and the olive spread.  Sweet sigh of Spain, even if our version of Andalusia overlooks the backyard. 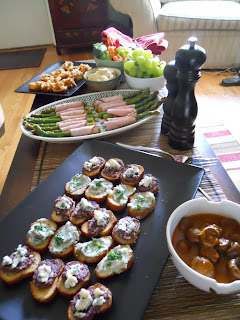 
Instructions:
1.    Toast bread on a cookie sheet in a 350 degree oven until lightly browned and crisp, about 5 minutes.  Cool.
2.  In a bowl, mash the cheese well with a fork.  Mix in the brandy.  You may serve this right away, but it gains in flavor sitting overnight at room temperature.
3.  Spread the cheese on the bread and garnish with parsley, or serve the bread and cheese separately and let people do the work themselves.
Bread Cheese Olives Tapas: Little Dishes of Spain