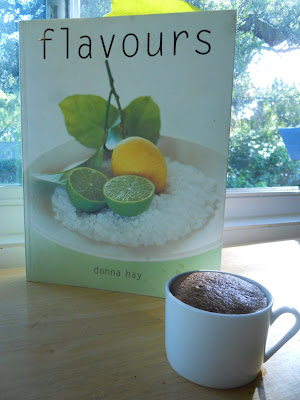 This cookbook was one of the first presents I ever bought the husband.  Uninitiated in the world of All Things Donna Hay, I liked the cover and the photography within.  Everything looked pretty simple, and I was sort of delighted by the layout (whole chapters on vanilla! ginger! salt & pepper!).  I thought the book was clever and appealing.  It seemed like a fine, if somewhat generic, gift.  Since that day, however, this book has become splattered, creased, splotched and dog-earred.

Back in those Pre-Donna-Hay-Knowledge-Days, the husband was living in a grungy little apartment in Salt Lake City with quite possibly the most horrific furniture I had ever seen (there may have been lassos incorporated into the patterned "velvet" on the sofa).   These were the last halcyon days of his undergraduate career, and his apartment (shared with one roommate and two cats) overlooked trash dumpsters and a parking lot.  However, one sweet night, we transformed the tiny kitchen into a 5-star restaurant: we grilled steak and let blue cheese melt over the top, whipped yukon gold potatoes with butter and cream, and we ended with Donna Hay's Saffron and Vanilla Poached Pears.  For no discernible reason, we have not made the pears since (it was possibly ten years ago).  But we still speak of them.  Fondly.  Thank you Donna Hay.

How we now love Donna Hay.  We have since become one of the converts.  And we love the simple styling of the photographs (the ones in Flavours are taken by Petrina Tinslay).  This is committed food pornography: the perfectly arranged setting, clear focus on one element of the food, soft focus on the receding rest of the food, only white plates with white backgrounds.  Every recipe has a picture, so you can get inspired by any recipe in the book because the pictures are as beautiful as the taste.  And her magazines are just as stunning. 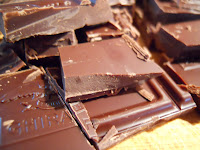 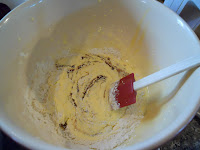 Seriously, the Australians can pull together this cooking thing.  Down the street from where we live is Bake Sale Betty--the most amazing Australian-owned bakery.  A former line cook at Chez Panisse (no wonder we love her!), Betty (or actually Alison) wears her hair blue--but not in the cranky-old-lady tradition, rather in the electric-funky tradition. The whole bakery carries that theme:  the storefront has no sign, yet on weekends, the line snakes around the corner; daily specials are handwritten in black sharpie on white paper and pasted to the windows; the tables on the sidewalk are unfolded metal ironing boards surrounded by little stools.   But all of that cult-initiated cleverness aside, it's hard to know what is best--the pear and ginger scones, the ginger cookies, the blueberry pies, or the chicken sandwich (don't look too closely at the calorie count).  But the final verdict, no matter what, is that these two Australians make a mean dessert. 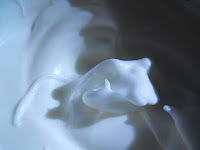 Thus, it seemed most appropriate that page 210 (or actually 120 because this is a thin cookbook) fall in the chocolate section. I had to choose between the two recipes on the page: Malted Chocolate Pudding and the Chocolate Panna Cotta to accompany the "April Birthdays Dinner."  Every year, we cook dinner for the bevy of the husband's parents (seriously, it took a village to raise that child), three of whom have April birthdays. We always look forward to this dinner--there's nothing quite like surrounding yourself with people you love and who love you back.  To round out the menu, I went with the Malted Chocolate Puddings, even though our version had no malt in them.  Who knew malted milk would be so hard to find?  After going to two stores this morning,  I gave up and just got powdered milk.  And I don't think it mattered.  With a dallop of whipped cream, these little Milk Chocolate Pudding Cakes were pretty darned divine.  With good wine, bisteeya, and a goat cheese and beet salad to start, dinner was a rousing success, and these little pudding cakes were sweet, spongy, and light.  Definitely make them in the tea cups: so much cuter.  Thank you, thank you, Donna Hay. 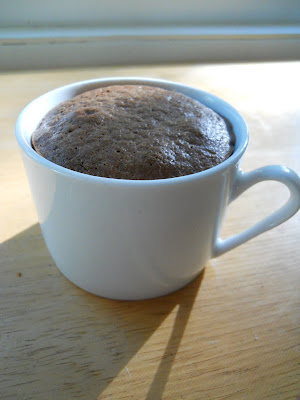 2.  Place the chocolate, butter and malted milk powder in a saucepan over very low heat and stir until melted and smooth.  Remove from hear and set aside.

3.  Place the egg whites in a bowl and beat until soft peaks form.  While beating, gradually add the extra sugar until the mixture is glossy.  Fold this egg white mixture through the chocolate mixture.

4. Pour the mixture into six greased 1-cup (8 fl ounce) capacity teacups or dariole molds.  Place on a baking tray and pour enough hot water into the tray to come halfway up the sides of the cups.

5.  Page for 25 minutes or until the edges are cooked but the centers are a little soft.