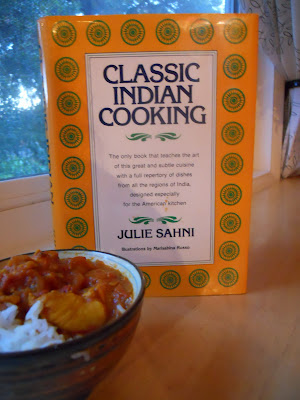 I have already waxed poetic on the Indian food in the Bay Area.  However, this cookbook ensures that I have perfect Indian cooking at home anytime I want it--or am willing to devote the three hours of cooking time to make it.  Deciding that cooking was a fine way to spend a weekend afternoon, instead I made this during a weeknight last week (which would indicate why I didn't have the time to post it.  However, then with all the hullabaloo surrounding the end of the school year and a fantastic visit from a friend from out of town, I really never got around to posting.  I promise, I am not shirking my cooking duties, but I sure have been shirking the posting duties).

Anyway, The New York Times loved this classic cookbook, comparing it to Marcella Hazan's Classic Italian Cooking (to be featured here later). And it is a pretty grand cookbook, for Julie Sahni walks you through all the basics of Indian cooking with a kind a patience one must reserve for the American cook. With a full two pages devoted just to how to brown fry onions, garlic and ginger, Sahni explains to Westerners that there is nothing quite like this base for food in American or French kitchens.  Somewhere, she explains, "between sauteing and deep frying," Geela Masala Bhoonana (this concoction of onion, garlic and ginger) is intrinsic to Mogul cooking, adding color, flavoring and importantly thickening to the golden-reddish gravies. 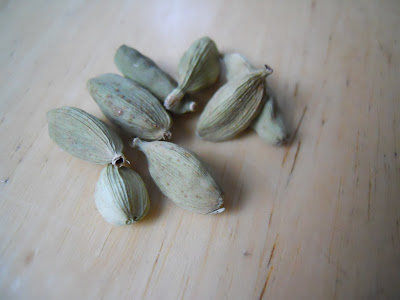 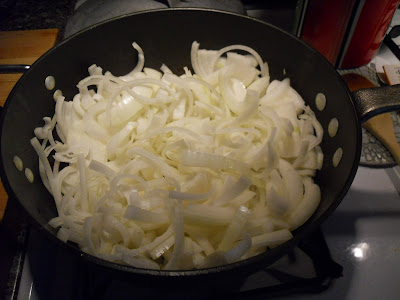 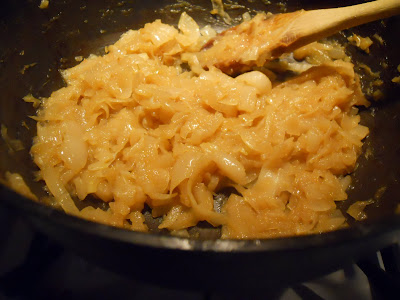 In fact, the first 96 pages of the book are devoted to the "Principles of Indian Cooking," explaining spice blends, special techniques, and menu planning.  The final 30 pages (before the index) gives mail order and shopping guides for those not near a good Indian grocery store and a glossary of Indian words.  This classic, celebrating its 30th anniversary this year, reminds you that Indian food is varied, complex, and while time-intensive, an approachable cuisine for even the most basic of cooks.  While she gives precise measurements of herbs and spices, she encourages her novice cooks to delve into their own artful cooking, tweaking, pinching, and making their dishes their own.  She equates such crafting of cooking through spices to learning a language and ultimately becoming comfortable enough within it to make it your own tongue.  Language and cooking.  Now that's something I can  get behind. 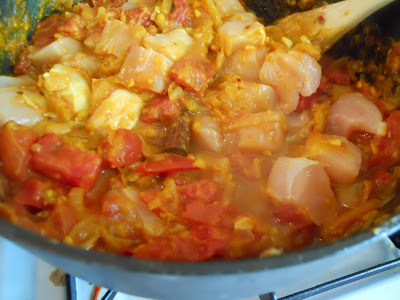 Finally, this recipe is a classic from Punjab (a state in Northwestern India on the border with Pakistan), a region known for diverse cooking ingredients and preparations.   This meal takes some time to make, but even if you're cooking only for two, you will want to make the whole recipe.  Leftovers are even better the next day.  So settle in, make some gravy.  It's worth it. 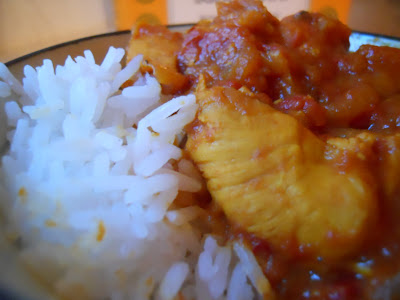 Instructions:
1. Add 8 tablespoons of oil to the pan, along with the onions at medium-high heat.  Fry onions until they turn light brown (about 30 minutes).  Stir occasionally (especially at the beginning) to prevent burning.

2.  Add garlic and ginger and fry for an additional 5 minutes.

3.  Add cinnamon and cardamom, and continue frying until the spices begin to brown and are slightly puffed (about 2 minutes).

5.  Add pureed or chopped tomatoes, along with the chicken, salt, and two cups of boiling water.  Stir to mix, reduce heat and simmer, covered until chicken is cooked and very tender and the gravy has thickened (about 45 minutes).  If the gravy has not thickened adequately, increase heat and boil rapidly, uncovered, until it thickens to the consistency of a beef stew.  If, on the other hand, the evaporation is too fast, add a little water.  Check frequently during cooking to ensure that the sauce is not burning.  The finished dish should have plenty of thick, pulpy gravy.

6.  Turn off heat, and let the dish rest, covered, for at least an hour, preferably 2, before serving.  When ready to serve, heat thoroughly, fold in roasted cumin and chopped cilantro, check for salt, and serve.
Chicken/Poultry Classic Indian Cooking Onions Tomatoes