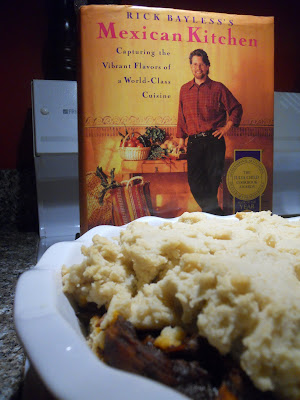 Every Christmas, one of the husband's fathers* hosts a small tamalada.  These tamale-making-parties carry on New World traditions, and our annual gathering is a nod to the husband's father's Mexican-by-way-of-Oklahoma heritage.  Labor-intensive and best conducted with many hands and pitchers of margaritas or sangria, this get-together often leaves us feeling a little sick because not only do we devour a good deal of the filling before we mold masa around it, we also eat way too many of the cooked tamales (particularly the tomatillo-chicken ones).  At the end of the night, we haul home oodles of them (leaving twice as many behind with the parental hosts), and those tamales that we don't immediately consume in the next week we put in the freezer to be pulled out for a March tamal or two or ten.

While it would feel strange to have a tamalada any other time of the year, one still hankers for those sublime morsels of chicken-wrapped-in-masa.  Once the reserves run out, we have to resort to other measures.  This recipe is our own Christmas in September, allowing us to use big, beautiful tomatoes fresh from the CSA box.  Plus, we don't have to do all the work of individually wrapping the tamales in corn husks.  Definitely a bonus. 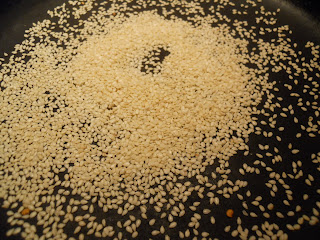 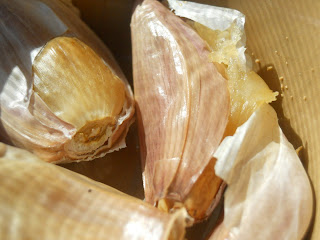 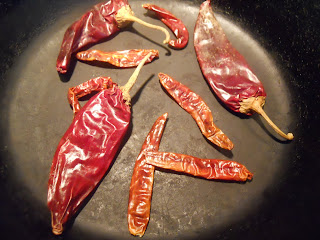 Our cookbook author and guide this evening, Rick Bayless, also hails from Oklahoma.  It seems we have a triumvirate of Oklahoma associations.  Rick Bayless, the husband's father, and me.  While Illinois was home for 12 years (also where you can find Bayless's restaurant Frontera Grill), I was born in Oklahoma.  I remember nothing of it, as we moved well before I saw the close of my first month.  But I like that I was born in the town that has associations with The Grapes of Wrath--Tom Joad was released from Big Mac before embarking on his California quest.  (To boot, I am teaching Grapes with a dear friend of mine this spring).  For Oklahomans who learn where I was born, I often have to explain that no, my family had no connections to the state penitentiary, but I do get to claim the Sooner State as the motherland. 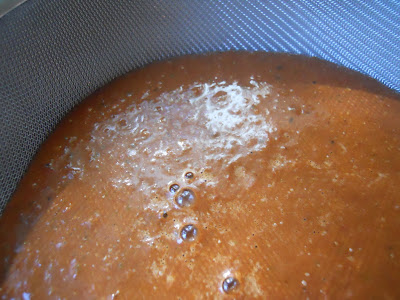 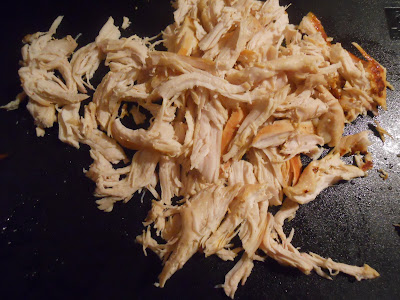 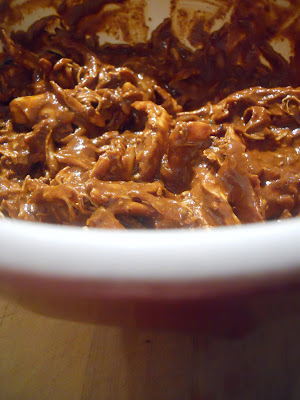 Oops, sorry.  Rick Bayless.  Let's focus here.  Bayless is no Diana Kennedy, whom we will get to later in the year.  But he's the next best (and Americanized) thing.   After doing doctoral work in anthropological linguistics at the University of Michigan, Bayless spent six years in Mexico gathering material for his first cookbook, Authentic Mexican:  Regional Cooking from the Heart of Mexico.  Not bad, seeing as the book is enjoying a 20th-anniversary resurgence.  Further, Bayless is the Alice Waters of the Midwest, with his Frontera Farmer Foundation, a nonprofit committed to small, sustainable farms in the Chicago area.  These are causes--authentic Mexican cuisine and sustainable farming--that I can get behind. 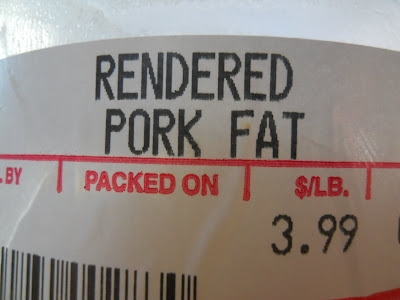 The tamal is tasty and filling (it is made with rendered pork fat, people), and it did inspire me to buy some Christmas music on I-tunes.  (I am not allowed to listen to it until the day after Thanksgiving, but I might sneak in a listen or two while I am at work.) 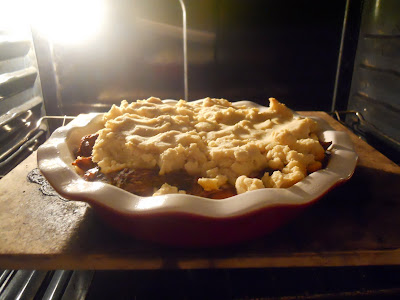 Finally, there were two downsides to tonight's dinner:  (1)  I didn't make seven gallons of the mole to eat on everything (seriously, think pouring it on enchiladas, pork, rice, beans, chicken, beef, shoe leather. This mole is that good.)  And (2) we didn't consume it before going to see Green Day, who are sold out at Shoreline tonight. 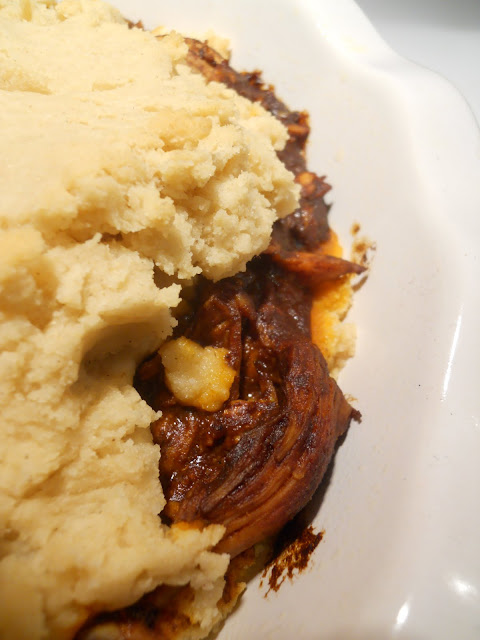 
*The husband has two fathers, three step-mothers, and one mother.  It took a village to raise that boy.

Instructions:
Preparing the Batter
1.  With an electric mixer, beat the lard with the baking powder in a large bowl until light in texture, about 1 minute.  Continue beating as you add the masa in three additions.  Slowly beat in a generous 3/4 cup of the broth.  Continue beating for another minute or so, until a 1/2 teaspoon dollop of the dough floats in a cup of cold water.

2.  Beat in enough additional broth to give the mixture consistency of soft (not runny) cake batter (it should hold its shape in a spoon).  Season with salt to taste.

Making the Tamal
1.  Turn on the oven to 400 degree.  Combine 3/4 cup of the sauce or mole with the shredded chicken or meat in a small dish.  Spread half of the batter into a greased 10-inch pie plate.  Spoon the meat mixture evenly over the batter; then spoon on the remaining batter to cover the filling.

2.  Bake for 25 minutes.  Then reduce the oven temperature to 300 degrees.  Cover the top of tamal lightly with foil and continue baking until the center springs back when pressed lightly and the top is golden brown, about 20 minutes.  Let stand for a few minutes before cutting into wedges and serving with a spoon or two of the remaining sauce.

Instructions:
1.  In an ungreased and heavy skillet heated over medium, toast the chiles a few at a time.  In a medium-sized bowl, cover the chiles with hot water and let rehydrate for 30 minutes, stirring occasionally to ensure even soaking.  Drain and discard the water.

2.  While the chiles are soaking, roast the tomatoes under the broiler, about 10 minutes.  Flip, using tongs, about half way through.  Cool slightly, then peel the skin, reserving juices.

4.  In a skillet, toast the sesame seeds.

5.  Combine tomatoes, garlic, sesame seeds in a blender.  Add chiles, cinnamon, oregano, chocolate and 1-1/2 cups chicken broth.  Blend to a smooth puree, then press through a medium-mesh strainer into a small bowl.

6.  Heat the lard in a heavy, medium-sized saucepan over medium-high heat.  When hot, add the strained puree all at once and stir for several minutes as it seas and thickens.  Stir in the other 1-1/2 cups chicken broth, partially cover, and simmer for 1 hour, stirring occasionally.  Taste and season highly with salt (usually about 1-1/2 teaspoons) and the sugar.