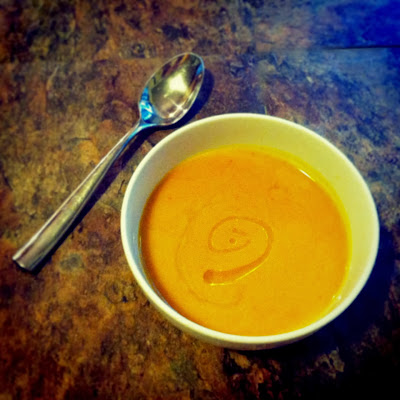 Squash soup.  Sure, everyone trots out their favorite recipe for the humble gourd this time of year, and I am no exception.  One of my favorites (detailed here) includes white beans and kale, while another (which I really do need to write into a post) requires a boiled cashew base with a chipotle cream.  However, after a time, these old favorites can feel a little tired, and I am a firm believer in varying up your squash soups.  Have one that is just plain comforting (see above link) or have one that has a little Mexican flair (as in the chipotle cream drizzled one--I know, I know, I really do need to make a post here).  This one, which comes straight from my new birthday cookbook, Vegetable Literacy from the marvelous Deborah Madison, is clearly Asian inspired, what, with the coconut milk, ginger, miso, and sesame oil.  Now a newly christened favorite, this version of squash soup will now be part of my fall rotation. 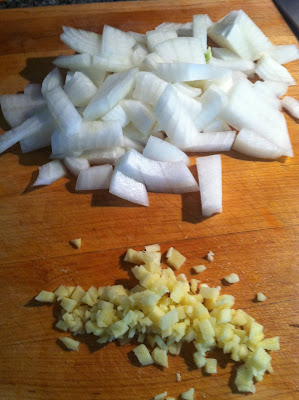 My father sent this cookbook my way in order to celebrate my turning 39 in September, and since then, I have been enjoying it tremendously.  The book opens with  pretty little end papers (carrot blossoms, perhaps, as a nod to the two-year carrot gone to seed and then bloom in the introduction?  mustard blossoms?), inviting you in for a feast of both images and recipes.  From the pleasingly photographed food (courtesy of Christopher Hirsheimer and Melissa Hamilton) to the simply explained recipes, this book is presented in such a way as to make you want to and believe that you can cook.  Madison breaks the book into 12 families of edible plants and then she has a hey day.

The cucurbit family--that of squashes, melons, and gourds--has been my focus lately, given the season and all.  Madison explains that many of the family are inedible but are highly functional, taking on the role of water carrier, pipe, birdhouse, storage vessel, instrument, and penis sheath (?!).  Her focus, of course, is the edible ones, which are high in carotenoids (a key antioxidant), Vitamins A and C, potassium, manganese, folate, some omega-3 fatty acids, and various B vitamins.  She also cautions that these vegetables are very effective in the remediation of chemically contaminated soils, soaking up from the ground all of the unwanted contaminants.  Yay for squashes doing a great job in cleaning up the ground.  However, you're best bet is to buy organic rather than conventionally farmed squashes, as the organic farm is less likely to have soil contaminated by the sprays routinely used to grow conventional vegetables. 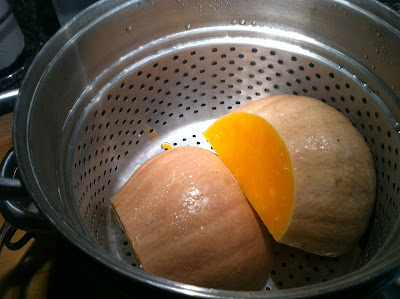 The truth is, I am not a huge fan of cooking winter squash, mostly because I am a lazy, impatient cook.  I grow frustrated with peeling butternut squash (see, I said I was lazy) and I hate waiting for the squash to roast when I want to make my soup now.  As in right now.  This recipe requires one to both peel and to steam different parts of the squash, but I found it much more manageable: the peeling kept me busy while the rest of the squash was steaming, so I found my impatience dwindling.

On a side note, when I went grocery shopping for this recipe, I chose the smallest butternut squash I could find.  It was a full six  pounds.  The recipe calls for two pounds only.  So I cubed the neck, as the recipe calls for, and then I froze most of it, hopefully curbing my impatience and laziness next time I want to make squash soup.  To freeze squash, do spread out the chunks on a baking sheet first so as to avoid one giant clump of squash cubes.  Then toss the frozen squash cubes into a freezer-safe container.  Go to it. 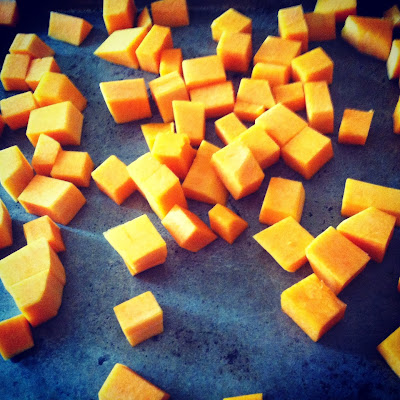 The final verdict on the cookbook:  If you have a garden or you spend a lot of time at the farmer's market (or if you have a garden that turned into a farm), then this is a cookbook for you.  However, if you're also just looking for more ways to cook vegetables--as in really cook vegetables where you can coax the best flavors out of them--then this is also the cookbook for you.  Go get it now.

And on the squash soup:  whoo boy, this is quite tasty.  It is spicy and sweet and salty and satisfying.  Brew up a batch for yourself. 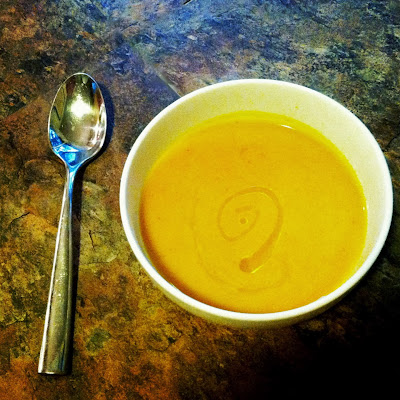 *The Aleppo Pepper is a Turkish chile pepper with moderate heat and cumin undertones.  I substituted 1 teaspoon ancho chile pepper, 1/2 teaspoon cumin, 1/4 teaspoon sweet paprika and 1/4 teaspoon smoked paprika.  I have no idea if it tasted anything like the aleppo pepper, but it was damn tasty.

Instructions:
1.  Cut the squash in half crosswise, just where the neck of the squash joins with the round (seeded) end. Bring a half inch or so of water to a boil, lower to a simmer and place the seeded end in (unpeeled and uncored). Put a lid on and steam until soft, about 15 minutes, while you continue with the recipe.

3.  Heat the oil in a deep soup pot, and then saute the squash cubes together with the onion and ginger. After a few minutes, add the aleppo pepper, turmeric, cilantro stems, and about 1½ teaspoons salt.  Cook for about 3 more minutes, stirring occasionally. Stir in the coconut milk and three cups of water and bring to a boil. Lower to a simmer and cook, covered, for about 20 minutes.

4.  Meanwhile, check on your round end of the squash. When tender, remove the squash and when it’s cool enough to handle, cut it in half lengthwise and scoop out the seeds and discard. Then scrape the soft flesh from the skin. Puree the flesh together with a cup of the soup liquid until smooth. Pour the puree back into the soup, and add the lime juice.  Taste for salt and lime juice

5.  While the soup cooks, also cook the rice. Boil 1 cup of water, then add the rice, 1/4 teaspoon of salt, and bring back to a boil.  Then turn to the lowest heat and cook covered for about 15-20 minutes. When finished, stir in the coconut butter.

6.  When the soup is done, dilute the miso in 1 cup of the soup liquid, mashing it until smooth. Return this cup to the soup and heat through if necessary.

7.  To serve, add a few drops of toasted sesame oil to each bowl and coat the sides.  Then ladle the soup into bowls and add a little rice to the center. Finish with cilantro sprigs.**

**I did no such thing with the rice.  I like my squash soup to be solely squash soup; however, I can see what she's going for here.  If you need to make a hearty meal, make it with the rice.  Ignore the rice otherwise.
Coconut Ginger Miso Onion Rice Sesame Oil Squash Vegetable Literacy