I love quinces. Pretty much, I love everything about them. Their name (that beautiful q), their color, their smell, and their taste. I love their history--some even say that they were the "golden apple" of Paris-Aphrodite fame or the ever-tempting apple of garden of paradise lore. I love that they can keep for a while, so if you buy a bunch, you can leave them to sit in a bowl on the kitchen table and they make the whole house smell rosy and sweet and autumnal. Yep, I love quinces.

This little dessert is a simple one, and one you (apparently, as I did) can forget about. I guess I need to chalk its forgiving nature up to that catalogue of quince attributes to love. 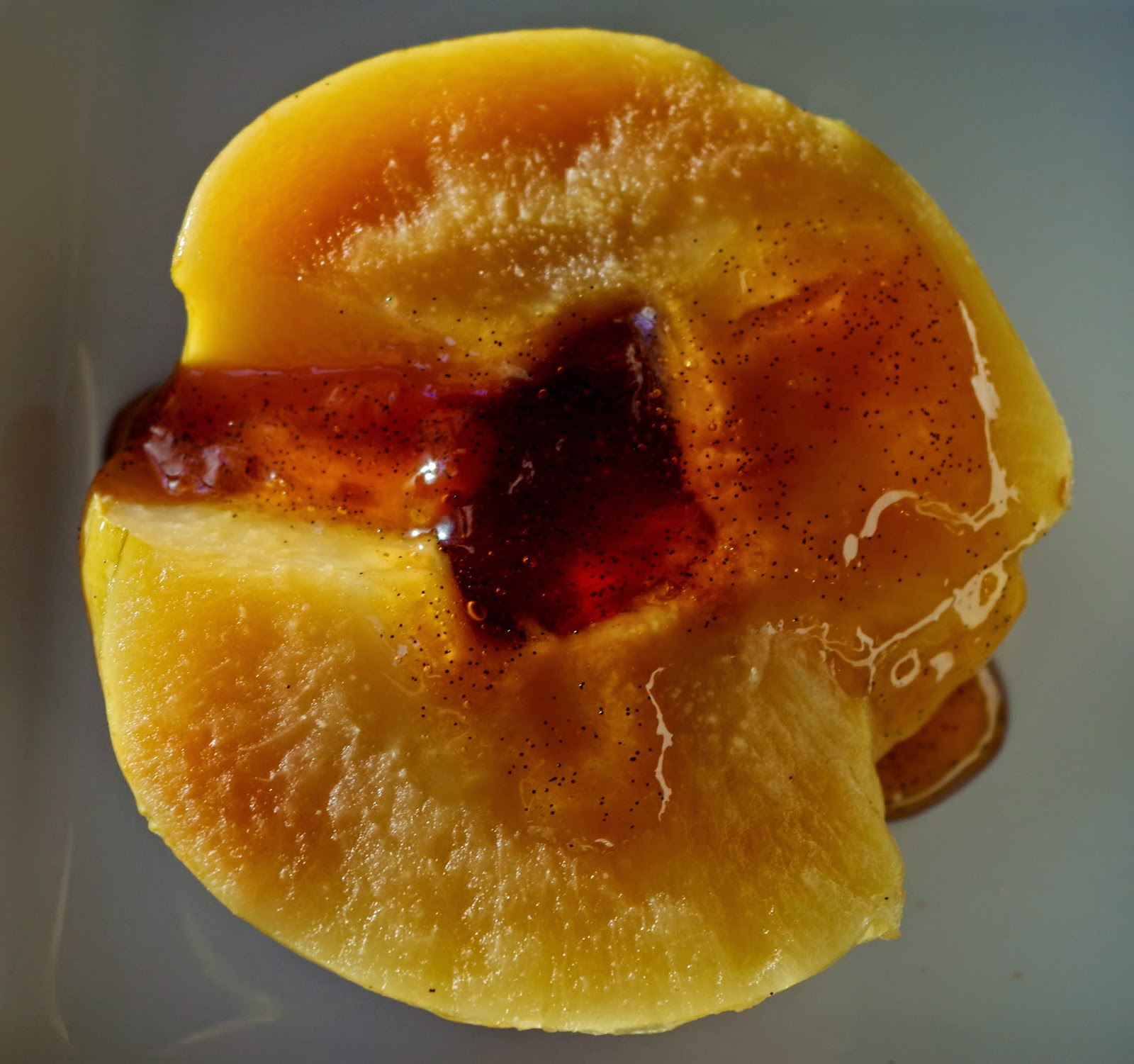 The quince, which I plan to feature again soon in the form of lamb and quince tagine, can generally be found from October to February. And when you find them, snap them up. Because March is out there, you guys, waiting on the horizon, marking the time of beginning of the season of denial. No body needs that.

Large quince can weigh up to a pound; indeed, the dense little number that I used for this recipe weighed a full pound and we had plenty of quince left over for a subsequent day of slicing up the poached quince and frying it in a little butter. Yes. That is what you can do with any leftover quince from this recipe. And it is divine.

Quinces are very high in pectin (which reduces the longer they ripen); because of the high pectin levels, quince are used to make dulce de membrillo,  that delightful rosy-colored paste found on any Spanish cheese plate (particularly if that cheese plate also sports manchego cheese). This pectin, found in the seeds and the peels (so don't remove them), is precisely what allows the sauce to turn into the consistency of honey and what shoots this simple poached fruit dessert into the stratosphere. 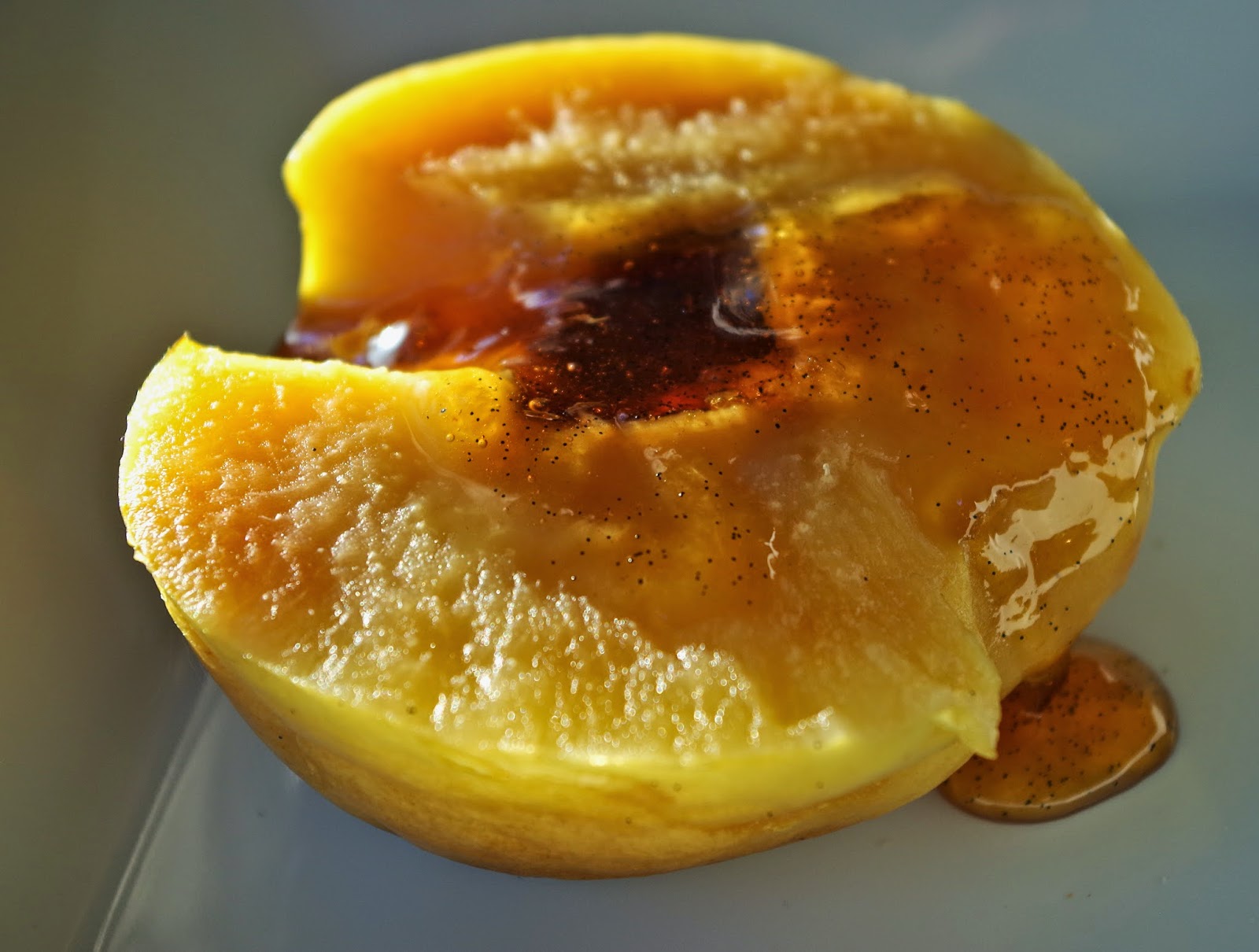 Some notes on how I changed the recipe: I wanted something a little more autumnal (because I am aching for autumn here in Northern California, as I always do this time of year when I see friends posting photographs of blazing-red leaves on trees), so I added a vanilla bean and about 5-6 cloves to the poaching liquid.  When I was boiling the liquid down into the jelly, I absolutely and totally lost track of time. As in, completely.  So I don't even know how long I cooked it, but it was about *this close* to burning. There was much cursing as I called in the husband to help me flip the saucepan into a strainer in the fastest time possible. Turns out that's how long you need to cook the sauce.  Because it formed into this gooey, honey-like jelly that was concentrated and sweet and so, so beautiful.

Finally, Claudia Roden recommends serving these beautiful quinces with kaymak, which is a a rich buffalo's milk from the Middle East (called kaymak in Turkish, eishta in Arabic).  However, she also says that a spoonful of mascarpone will do in a pinch. It did. And it was hardly a pinch.

In sum, what a delightful, almost healthy dessert (okay, that is a lot of sugar, but I was eating a serving of fruit, so that knocks it over into healthy, right?). Next time you see quinces, grab them. Once you're tired of having them sit in a bowl looking beautiful and making your house smell good, it's time to cook them up into this lovely dessert. 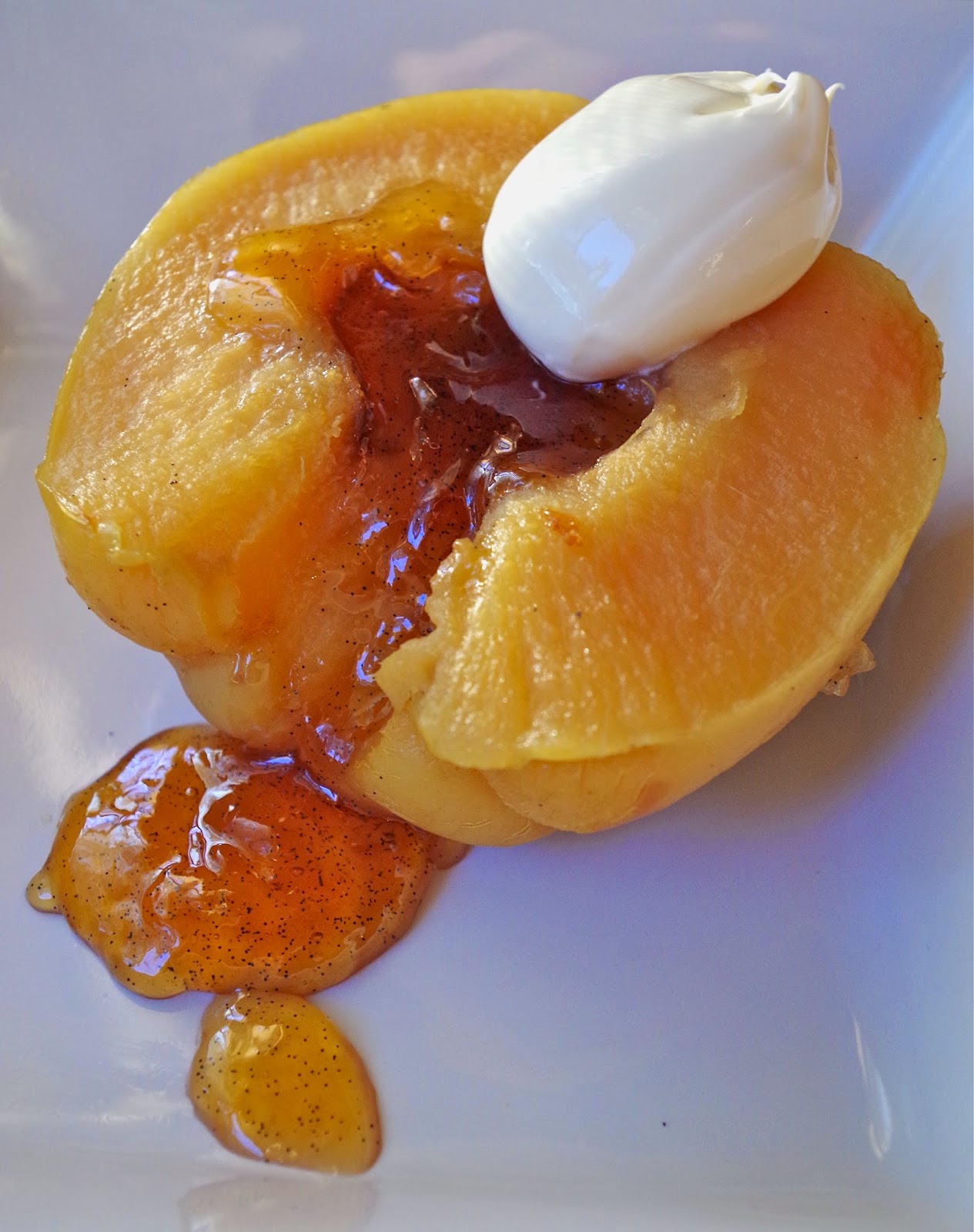 2.  Wash the quinces and scrub to remove the light down the covers their skin.  Cut them in half, through the core, but do not peel.  Don't core them, for the pips are important, as they produce a wonderful red jelly (and you need them along with the skin of the quince for their pectin).

3.  Put the quince in the boiling sugar-water with the cut sides down (the water should cover most of the quince, but don't worry too much about the water level as the fruit cooks for a long time and will steam with the cover on the pot).  Simmer with the lid on the pot until the fruit is tender and the syrup begins to turn a reddish jelly.  The time varies greatly, anywhere between 20-60 minutes, depending on the size of the quince.  If the fruit becomes tender before the jelly begins to form*, carefully remove the quince from the sugar-water, remove the red pips from the core, and return the pips to the sugar-water.

4.  Boil the sugar-water down until it begins to form a syrup.  Quickly strain the syrup through a fine mesh sieve to remove the vanilla, cloves, and pips.

5.  Arrange the quince halves, cut side up, on a serving dish.  Spoon the syrup over the top--it will form into a jelly as it cools.

6.  Serve chilled or at room temperature with dollops of clotted cream, mascarpone, or whipped heavy cream.

*which is what happened with mine.  I had to remove them, and then I let the liquid cook down.  As mentioned above, I forgot about the cooking liquid, so I am not sure how much time it really takes.
Cheese Cloves Cream Quince Sugar The New Book of Middle Eastern Food Vanilla