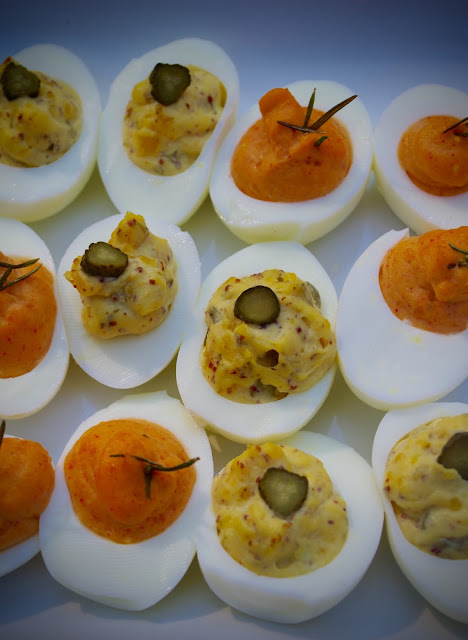 You know, I would like to say that I am a sophisticated urbanite who does not hanker for the staples of her childhood potlucks. However, I would be lying.

Yet such hankerings do not include Jell-o molds. Nope. (To be clear, I have nothing against the Jell-o set. I love my aunts dearly.) 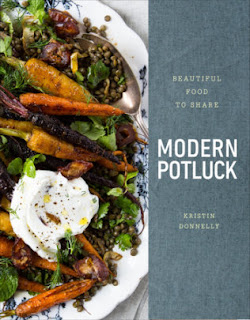 Kristin Donnelly of Eat Better, Drink Better has recently launched a new cookbook that drags the potlucks of yore into the modern age. Gone are the green bean and condensed (of course) cream-of-mushroom soup casseroles, the pigs in a blanket, and the cheese balls rolled in mixed nuts. Instead, Donnelly sets new rules for potluck fare that include

These are all rules that I can get behind. Her modern recipes include Apple-Ginger-Bourbon Cocktails, Indian-Spiced Spinach-Yogurt Dip, Ribollita with Lemon-Chile Relish, and Peach-Blueberry Slab Pie. Yes, please. 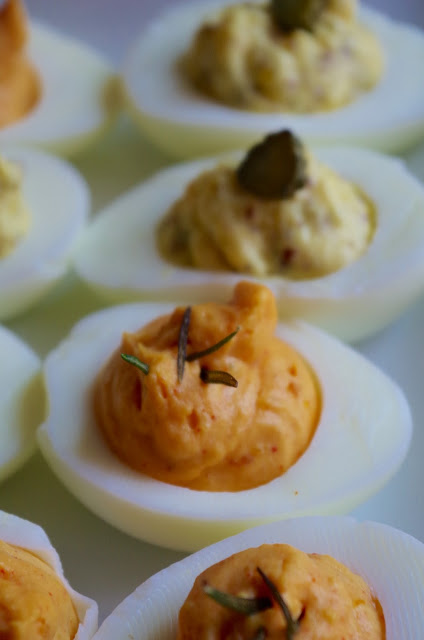 However, one does not simply have a potluck, a true potluck, without deviled eggs.

Donnelly updates the deviled egg to have a little more punch and pizazz than your standard mustardy, mayonnaisey, gloppy affair.  Instead, she gives us toasted rosemary and smoky paprika or whole-grain mustard and tangy cornichon. Neither really whips the deviled egg into unfamiliar territory. Instead, they nudge you from the familiar to the delightful, and Aunt Jenny won't be taken too far off guard.

These potlucks retain all the familiarity and coziness of a family affair and combine them with the edge of the unexpected. 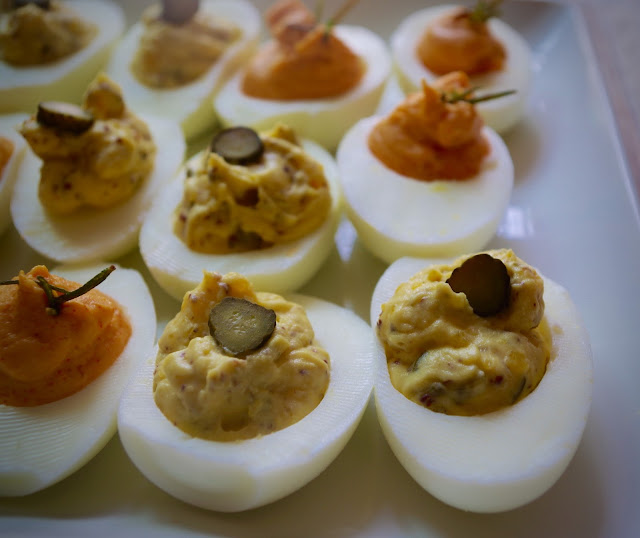 On a personal (and side) note, I served these deviled eggs as an appetizer before a birthday (potluck) dinner held in our backyard for one of our friends. Said friend is French, and she and her husband (also French) had never had deviled eggs before. We had to explain that these little bites were totally retro, absolutely nostalgic, and still a little special.

I felt like an ambassador of the American potluck.

(Let me just point out: there were none left. American and French diplomatic relationship remains intact.) 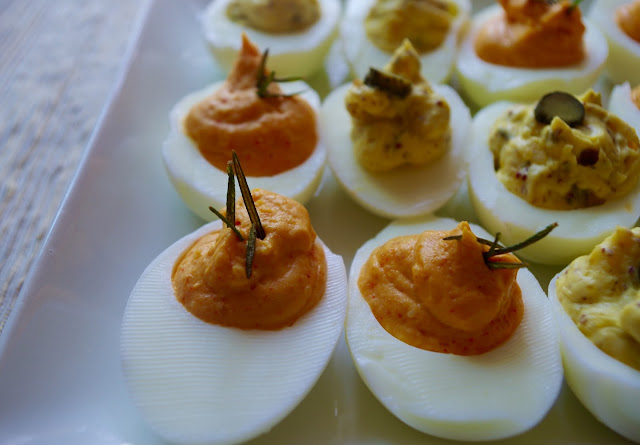 All in all, I am enjoying cooking my way through this fun little book. The recipes are pleasing, the layout easy to follow, and the design satisfying (if the cover is a little reminiscent of one of my favorite David Tanis cookbooks, One Good Dish from 2013).

Plus, Donnelly is urging us to use the "power of the potluck" to come together, truly see each other for the complicated and baggy and frail humans that we are rather than the projections we present behind the veil of the internet, share in the labor (of love) of cooking for one another especially in an age of costly ingredients, and settle our real and imagined differences over a meal.

Including ones with deviled eggs.

Now, that's something I--and all of my aunts--can get behind. 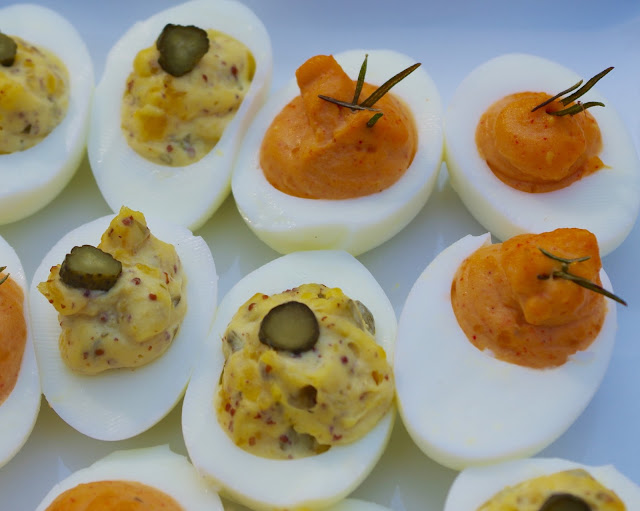 Instructions:
1. Set a paper towel next to the stove. In a small skillet, heat the olive oil. Quickly fry the rosemary in the heated olive oil, for about 30 seconds. Stir frequently while frying. Remove the rosemary with a slotted spoon, spread it on the paper towels in a single layer to drain the oil.

2.  Halve the boiled eggs, and use your fingers or a small spoon to remove the yolk, being careful not to tear the egg whites. Put the yolks in a mini food processor and blend until smooth. If not using a processor, either mash with a fork or press them through a sieve. Add the mayonnaise, mustard, lemon juice and smoked paprika and mix. Season generously with salt and pepper.

3. Arrange the egg whites on a platter, and then spoon or pipe the filling into the cavities in the egg whites. Garnish with the fried rosemary.

(Donnelly even has the solution for transporting deviled eggs!)


1.  Halve the boiled eggs, and use your fingers or a small spoon to remove the yolk, being careful not to tear the egg whites. Put the yolks in a mini food processor and blend until smooth. If not using a processor, either mash with a fork or press them through a sieve.

2. Mix in the mayonnaise, mustard, and chopped cornichon. Season generously with salt and pepper.

3. Arrange the egg whites on a platter, and then spoon or pipe the filling into the cavities in the egg whites. Garnish with the sliced cornichon.

(Donnelly even has the solution for transporting deviled eggs!) 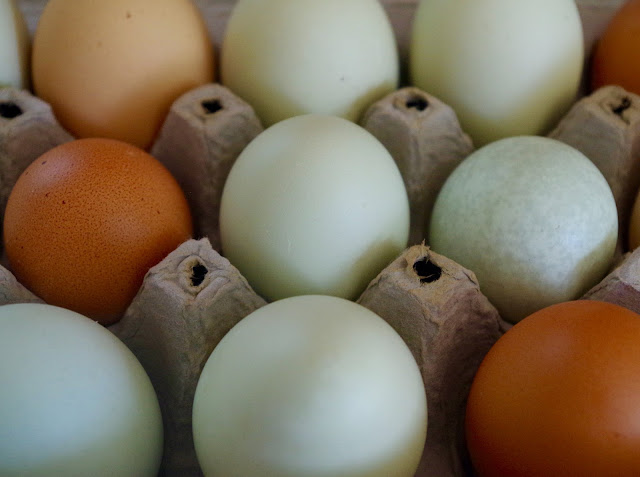 On my Foodie bucket list is the ability to make an amazing veggie burger.  As I have mentioned ad nauseam, I used to be a vegetarian. For a decade, people. And it was roasted Thanksgiving turkey that pushed me over the edge. And since then, I have been in free fall. That said, I do still love a great veggie burger.  Yet, I cannot seem to make them on my own properly. Enter in  Anna Jones's  A Modern Way to Cook , a vegetarian cookbook I have been looking forward to obtaining, as I love her other cookbook,  A Modern Way to Eat , so very much.  This latest output from Jones begins with the premise that we can all eat healthier no matter the time limitation we may find in the kitchen. From mere minutes to what she calls "investment cooking," this cookbook is delightfully arranged by the amount of time it takes to cook a meal. You might have only 20 minutes or a splurge-worthy 45 minutes, but no matter the time, you can get a salad
Read more