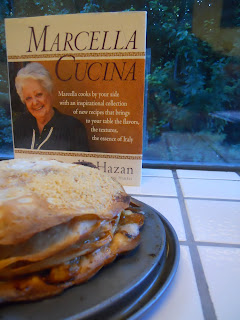 Welcome Full-Blown Taste of Summer!  This little pie announces summer with a trumpet call.  So unpack that eggplant from your CSA box or toddle on over to your local farmers' market for some bell peppers, because summer is on!  Yes, yes, the kiddies are returning to school and the days are getting shorter, but it can taste like sweet, sweet summer for a couple of more weeks.

As I mentioned in the last entry, we made dinner for the husband's parents in order to celebrate the end of Napfest 2010.  And this Tortino is darned astonishing.  While the recipe is long, this isn't really all that hard to make. 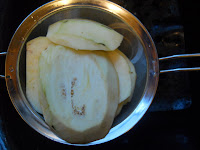 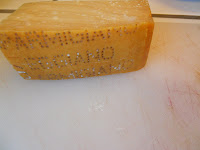 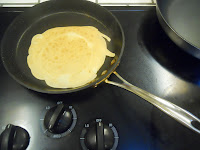 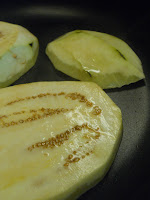 Granted, this was the first time I ever cooked this dish, so I set aside a good two hours and worked without hurry.  I made the recipe in a different order than Marcella suggests:  I chose to drain eggplant, roast peppers, make crepes, fry eggplant, assemble. However, Marcella also points out that you can make the filling and the crepes ahead of time, and then assemble when needed. So you be the master of your own kitchen, you rockstar you.  Marcella, of course, knows her stuff, so let her at least be your guide. 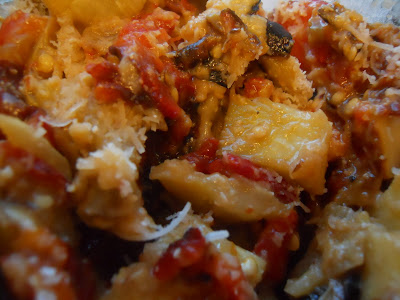 Like, say, Julia or Alice, Marcella goes by her given name, at least in the confines of our little kitchen.  Should I ever meet her, however, she would be the divine Ms. Hazan.  She earned her doctoral degree from the University of Ferrara, an institution that holds a special place in our hearts, as the husband spent some time there in the summer of 2003.  But Marcella turned her back on the biological sciences and transferred her allegiance to a tiny New York kitchen, a room where she had little practical experience before her marriage.  However, her taste buds guided her, and she found a new home with traditional Italian cooking. She then opened her own cooking school--The School of Classic Italian Cooking.  Now she's a veritable cooking superstar, standing toe to toe with all the other cooking giants. 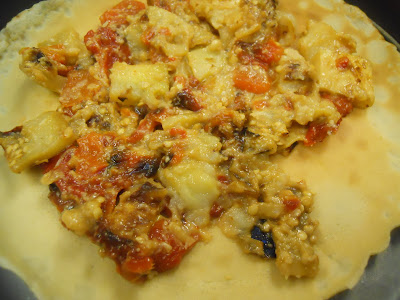 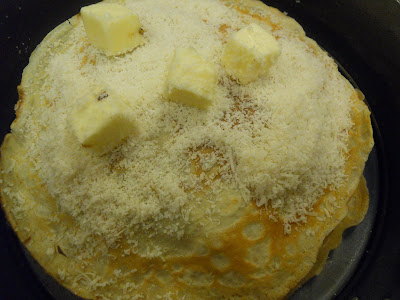 This recipe hails from Bologna,  where Marcella had a cooking school for a while.  Apparently, on the first night the students arrived, Marcella would entertain in Ristorante Diana, where students would coo over this pie-like construction.  In Bologna crepes are often used like pasta dough either to produce lasagna-like layered assemblages or as cannelloni.  Hey, you should trust the Bolognese, as Parma ham, balsamic vinegar, and bolognese sauce (meat ragu) all hail from the city and its surrounding region.  You can make this as pie or roll up a single crespella around the filling to make a large cannellone out of each.  We, however, went the pie route and were not disappointed.  This recipe is certainly worth the time and effort for the first attempt.  And now having made it, I imagine that subsequent assemblies will take far less time. 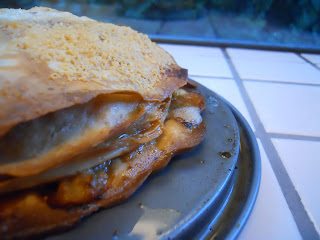 We also decided that you could vary the filling:  onion and butternut squash with gouda, zucchini and red peppers with parmesan, tomatoes and spinach with ricotta.  Really you're limited only by imagination and the seasonal produce.  This recipe will not steer you wrong.  So get to it.  It looks like you have some cooking to do. 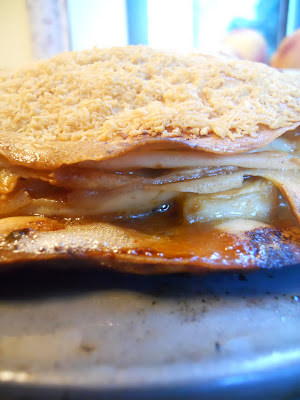 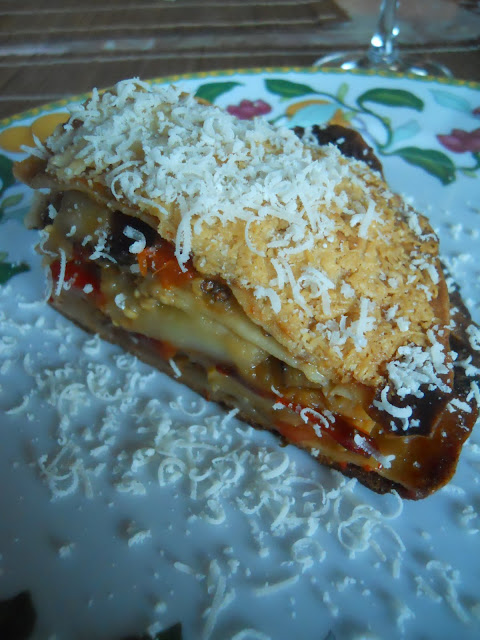 Instructions:
Making the Crespelle
1.  Pour the flour into a bowl.  Add the milk in a very thin stream, beating steadily with a whisk, taking care that lumps do not form.

2.  When all the milk has been incorporated, add the whole egg, the egg yolk, and a pinch of salt.  Mix steadily for about 2 minutes, then transfer the batter through a strainer into another small, deep bowl. [Yes, do this, even though it seems like an extra step.  But you will have smooth crepes this way.]

3.  Turn on the heat under a nonstick skillet to very low.  When the skillet is hot, spear the hard pat of butter with a fork and, with a rapid motion, very lightly swipe the bottom of the pan with it.

4.  Scoop up 1/4 cup of the crespelle batter and pour it into the pan, spreading it as much as possible  Lift up the pan by its handle, quickly tilt and rotate it with a seesawing up-and-down motion to distribute the batter evenly, and return it to the burner.  As soon as the batter sets up and becomes colored a light gold, slip a spatula underneath it and flip it over to do the other side.  Cook it briefly; then transfer it to a plate.

Preparing the Eggplant for the Pie's Filling
1.  Cut off the eggplants' spiky green tops.  Cut the eggplants lengthwise into slices about 1/2 inch thick.  If you're using purple eggplant, remove their tough skin.

2.  Set a colander over a bowl or deep dish.  Line the colander with one lager of the eggplant slices; sprinkle slightly with salt; place another layer of eggplant over the first; sprinkle a tiny bit more salt over it; and proceed until you have used up all the slices.  Let stand for at least 30 minutes to allow the eggplant to shed some of its astringent liquid.

3.  Remove the eggplant slices from the colander and pat them dry with paper towels.

4.  Pour enough vegetable oil into a 12-inch skillet to come at least 3/4 inch up the sides of the pan and turn the heat on to high.  [Yeah, I only did this on the first batch because it felt like way too much oil to me... I just reoiled the bottom of the pan and sauteed the eggplant.] When the oil is hot enough to sizzle if tested by dipping one end of an eggplant slice into it, slip in as many slices as will fit very loosely, without crowding.  Fry the eggplant to a rich golden brown, and use a slotted spatula to transfer to a platter lined with a double thickness of paper towels.  Lay the slices flat without overlapping too much.  Add more slices to the pan.  When they are done transfer them to the platter, after having covered the previous layer with double thickness of paper towels, and proceed thus until all the eggplant is done.  Let cool completely.

Preparing the Peppers for the Pie's Filling
1.  Wash the peppers and, if you have a gas burner, put them directly on the lit burner; otherwise, put the peppers under a hot broiler.  Turn them periodically to char the skin on all sides, then put them in a paper bag and knot it tightly closed.  Let them cool completely.

2.  When the peppers are cool enough to handle comfortably, remove them from the bag and pull off all their skin.  Split them open and remove their core and all the seeds.  Cut the peeled pepper flesh into strips or pieces that more or less match the eggplant's pieces, and sprinkle with salt.

Assembling and Baking the Pie
1.  Preheat the oven to 450 degrees.

2.  Combine the eggplant and peppers, mixing them with all but 3 tablespoons of the grated Parmesan.

3.  Lightly smear the inside of the baking pan with vegetable oil.

4.  Lay one of the crespelle on the bottom of the pan.

7.  Bake in the uppermost level of the oven for 25 minutes, until the top of the pie has become colored a rich gold.  Let the pie settle for 5 to 8 minutes, then use a metal spatula to lift it out to the pan, and without turning it over, transfer to a platter and serve.  [We used a spring form pan, which made this much, much easier.]  Sprinkle with additional Parmesan.
at 2:00:00 PM