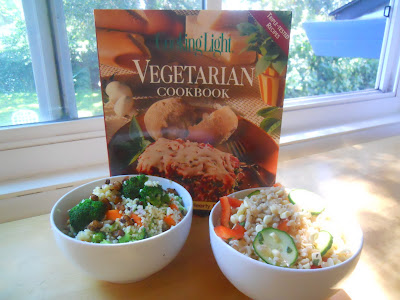 Two for the price of one!

This cookbook was one of those I once used to teach myself how to cook many a moon ago.  Remember, I was once a vegetarian.  See here.  And here.  The cookbook relies on dairy, eggs, and the occasional Worcestershire sauce (which causes one Amazon reviewer to take this cookbook to task), so vegetarians beware, even though the title says that all of you will be included.  Perhaps as this dairy-laden book helped me learn to become a vegetarian cook, I never really did lose any weight in those heady days of vegetarianism back in Utah and Colorado.  However, the options available to vegetarians twenty years ago (dear lord, did I just write that???  How is it that I was once so young and am now so old) were quite limited in comparison to where they are now.  Most 1990s vegetarian cooking, at least as far as I knew it, was the substitution or the removal of meat products from otherwise carnivore-rich foods.  This cookbook might be worth the 1 cent (yes!) being charged these days on amazon.  However, there are many more inspiring vegetarian cookbooks out there nowadays.

That said, I still like this cookbook.  There is an omelet that requires whipping the egg whites, which results in a sort of fluffy omelet.  I know.  That's a tiny bit foul, but try it.  You'll like it.  There's a comforting Vermicelli with Mushrooms and Pine Nuts  (and I know, I know, the evaporated skim milk as a base only smacks of my Midwestern roots, which we have already discussed here).  I do remember once serving eggs sardou from this cookbook, however.  That was an experience I never want to repeat again.  It was not good--in fact it was an absolutely epic failure that resulted in an ex-boyfriend (to whom I served said sardou) always snickering when I mentioned it--but it might be because in general, I don't think I like egg sardou.

However, I like this cookbook for the inspiration for grain-based salads, even if I have to tweak them a bit.  And they're great in the summertime when the heat is climbing (although it's not around here.  It has been a particularly chilly, foggy summer.  Which is perfect.  But if it were hot out, I might want to make these salads even more).  So bring out the grains when the heat index hits 100.

So as I said, two for the price of one.

On page 120 (because this thin little number doesn't go all the way up to page 210), I had my choice of Apple-Wild Rice Salad (wrong season), Corn and Barley Salad, and Bulgur and Broccoli Salad.  So I decided to make both the barley and the bulgur salads.   In a little less than three weeks, my daily nap schedule will change. I head back to work, back to school.  And that means back to packing my own lunches every day.  Both of these salads, or iterations of them, will indeed be moved into rotation.

So let's start with the barley salad.  Nutrition: I am sort of fascinated with the graphs on this page.  Barley is "strongly inflammatory," so watch out.  Nonetheless, I forgot how much I like barley.   Yes, now that I am not a vegetarian, I generally love it paired with an autumnal, salty, braised beef.  But it also makes a great nutty base for a summer salad.  Barley is  one of the very first crops ever domesticated by humans.  Gazowe!  Talk about feeling as if you're connected to human food history.   Without a hull, barley is a grain easy to digest, and pearl barley removes even more of the outer layers (thus making this little grain even more palatable and easier to process).  Apparently barley grows in areas where other grains are reluctant to grow.  To boot, it's the fourth ranked grain in total production (much of it going to animal feed and beer (malt!) production). 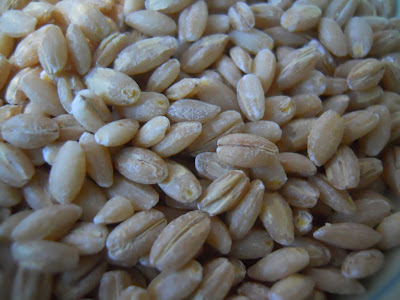 Anyway, barley's darned tasty when paired with corn.  In this recipe corn acts as another carbohydrate "grain" and there is almost as much corn as barley.  In fact, in my next go-round with this recipe, I will call for less or, maybe even, gasp, no corn (depending on the season) and a substitution of another vegetable (zucchini?).  In sum, this salad needed a little something more.  More salt?  More basil?  I don't know.  I was looking forward to this salad more than the other because I love barley, but in total, it was a little lacking. 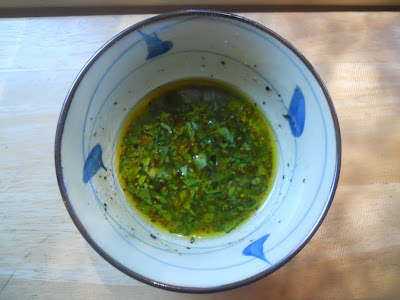 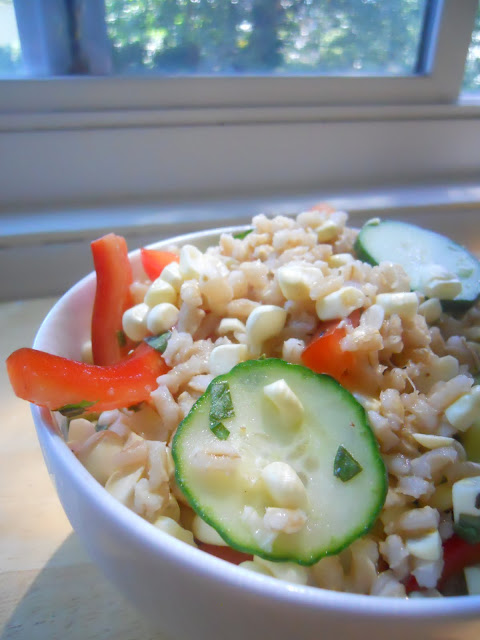 Now to the bulgur salad.  Bulgur is high in fiber, low in fat, and is used extensively in Mediterranean and Middle Eastern cooking.  Think tabbouleh. 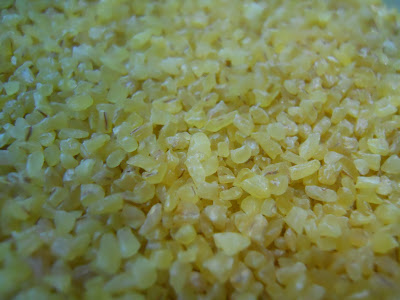 Beyond this workhorse of a wheat grain, the true highlight of this recipe is the walnut-soy sauce combination.  Three tablespoons of chopped walnuts (and I don't even LIKE walnuts) flash fried with a tablespoon of soy sauce.  Sweet business.  Sprinkle those little salt bombs on top of a lemony bulgur salad, and I am sold.  The steamed broccoli and crunchy carrots were a nice contrast to the bulgur and I liked the hint of garlic.  I think perhaps a little less water and a bit more oil in the lemon dressing will only make this better.  And be sure to keep the soy-bomb-walnuts-of-fabulousness (official name) separate from the salad if you have leftovers so that they don't get soggy.  This is one I will make again.  And lucky most of the ingredients in this salad stay in season throughout the winter.  I suspect we'll be seeing this one packed into my lunch bag a couple of times this fall. 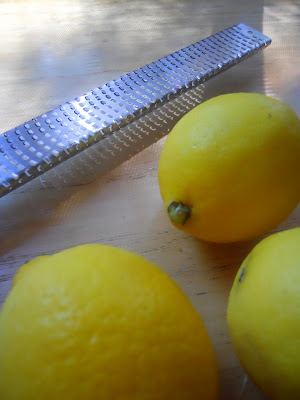 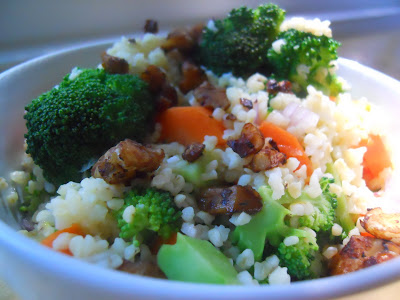 So what's the take home message?  Just make more grain- or legume-based salads, regardless of the cookbook.  I forgot how much I like chilled salads that I can makes tons of on Sunday and still be eating on Tuesday.  Lentils, you're next.

Instructions:
1.   Bring water to a boil in a saucepan; add barley and a pinch of salt.  Cover, reduce heat, and simmer 40 minutes or until liquid is absorbed.  Let cool.

2.  Combine barley, corn, cucumber, and red pepper in a bowl.

3.  Combine vinegar and next 5 ingredients.

Instructions:
1.  Combine boiling water and bulgur in a large bowl, stir, and let stand for 30 minutes or until the liquid is absorbed.  Fluff with a fork and set aside.

2.  Meanwhile, arrange the broccoli in a vegetable steamer over boiling water.  Cover and steam about 3 minutes until bright green and crisp-tender.  Combine broccoli, carrot and shallots in a small bowl.

3.  Heat a non-stick skillet, add walnuts and cook for 3 minutes, stirring constantly to prevent burning.  Add soy sauce, continuing to stir, until the soy sauce is absorbed.  Remove from skillet and set aside.

4.  Combine sugar and next 6 ingredients, and stir well with a whisk.