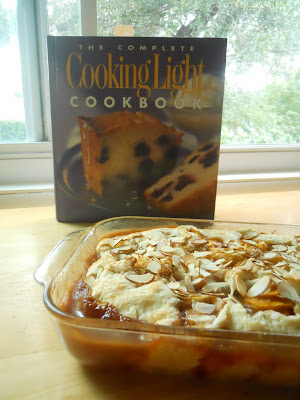 Ever have one of those cooking days?  You know the ones.  You think, ooh, time to bake, then you realize you have no butter, so you run to the store, buy butter (and eggs, just in case, but it turns out you had plenty of eggs) only to return home to discover you also didn't have cinnamon?  Yeah, well, it was one of those days.

But in cobbler, a little less cinnamon and a little more ginger, and no one can tell the difference.

So this is the last of my peach-themed dishes (last week I had to take a break with cold-grain salads).  And lordy, the peaches have been great this year.  Sweet, juicy, just perfect.  While the cool weather around the Bay Area has precluded tomatoes growing (seriously, not one of our tomatoes has a hint of orange, pink, or even yellow), the peach crop has been divine. 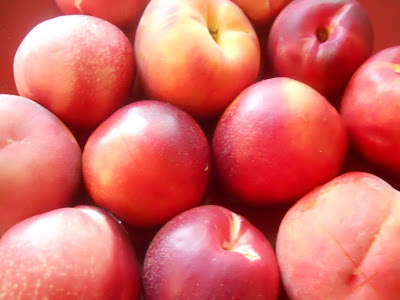 So in this final peach recipe, I have been commanded by the folks at Cooking Light (America's most-subscribed-to food magazine, it turns out) to make Peach Cobbler.  But upon doing a little research, I have determined that I really made a Slump.  And I am definitely on Team Slump.  But I thought it might be helpful to know the difference.
Well, no wonder it's hard to know which is which.   Cobbler, Slump.  Call it what you will.  As my father would say, just don't call me late to dinner.   (Or dessert, in this case). 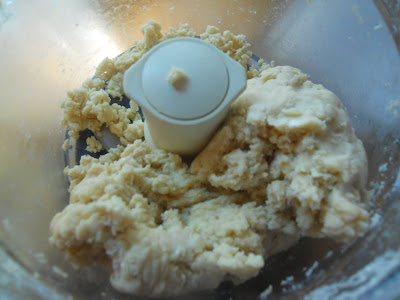 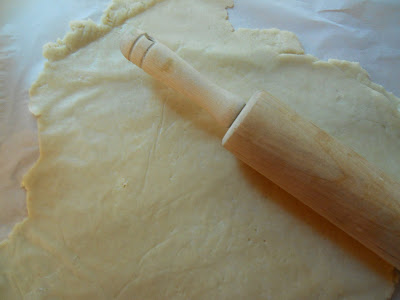 To be honest, I have been putting this recipe off.  Part of that has to do with the plethora of peach dishes that I have been cooking.  This is dish number four; thus, it did take some planning at the beginning of the year to determine in which order I would be cooking from the cookbooks.  I certainly wasn't going to be making this in March.  Barring pure ignorance about squab season (I didn't even know squab had a season), I have tried to cook seasonally and buy locally.  Yes, Alice Waters, you have my allegiance to seasonal and local foods.  However, the main reason for putting this recipe off is that I am not much of a baker. 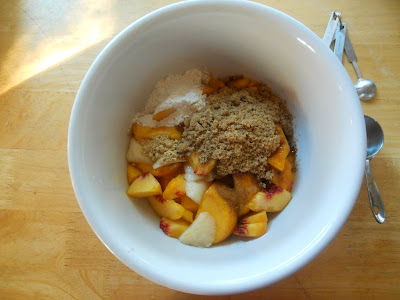 Over the years, I have acquired a few bread baking books in order to teach myself how to bake, and dear friends of ours recently came to visit us and gave us a fantastic cookbook on no-knead baking that I cannot wait to try.  So this fall, I suspect you'll be seeing quite a few breads and other baked dishes. 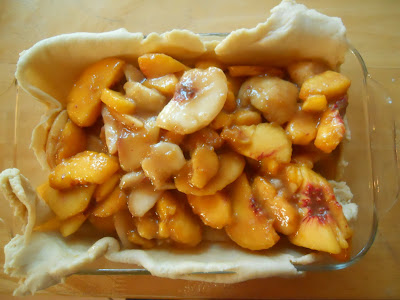 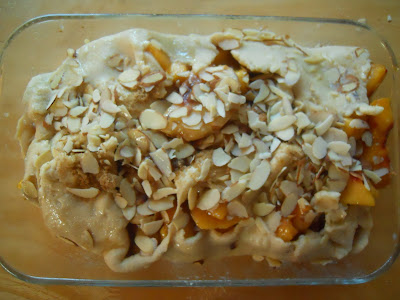 But why haven't I loved to bake?  Part of it is the age-old complaint that with baking you have to be precise whereas with cooking you can be a little more willy-nilly.  Part of it is chemistry versus collage.  With baking there is a high degree of chemistry happening.  Despite the valiant efforts of my chemistry teacher sophomore year in high school, I never really cared why this compound affected that compound.  Of course, I was boy-crazy, and a boy I had an undeniable (and unrequited) crush on sat only a few seats in front of me in class.  How could I possibly pay attention to Avogadro's number?  When he was there.   Sitting.

With cooking, there is a good deal of collage-making.  You get to play with different materials, layering, adding, smoothing.  And if you don't like how something tastes, often you can add something else to cover, mask, or simply cancel out another flavor.  With baking, you don't know if the bread is any good until you cut into it after you've baked it.  With cooking, you know if your lasagna sauce is pile of goo long before you assemble the pasta. 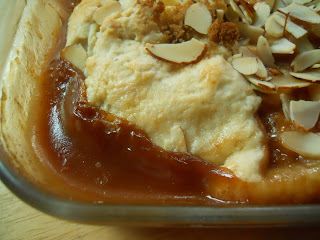 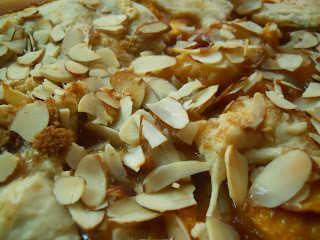 Anyway, I digress.  And indeed, it is a digression, for the dough on this cobbler is quite tasty and turned out to have just the right chewiness associated with biscuits.  To boot, the filling on this dish called out for sampling as I mixed in the spices, seeing as I didn't have enough cinnamon.  Thus, I was able to taste and alter accordingly (a little more vanilla here a little more ginger there).  Who knew that not having all of the ingredients would actually turn out to be a good thing?  So for all of those made-up justifications for cooking over baking, I guess I have to rethink my stance.

This recipe has been yet another lesson in preconceived notions.  About peaches.  About baking.  About having enough ingredients.  My, how I have notions.

And my, how I need to let them go. 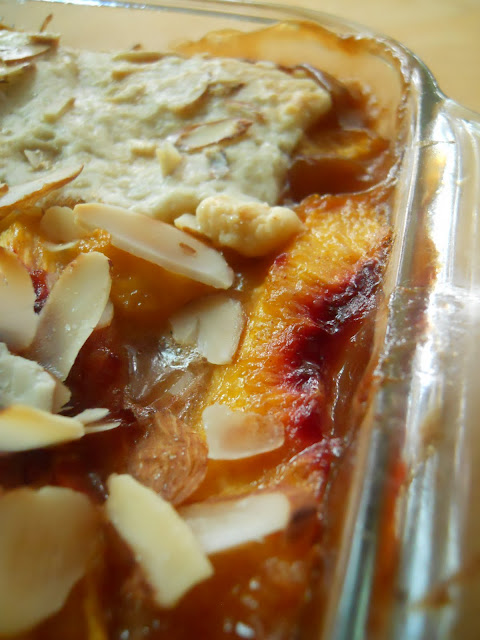 Filling
6 cups peeled, sliced peaches (it says about 3 3/4 pounds, but for me it was 2 pounds.  I had dense peaches)
3/4 cup packed brown sugar, divided
2-1/2 tablespoons flour
1 teaspoon vanilla extract
1 teaspoon ground cinnamon (which I did not have, so I did about 1/2 teaspoon cinnamon and 1/2 teaspoon ginger)

2.  Lightly spoon flour into dry measuring cups; level with a knife.  Place 2 cups flour, 1 tablespoon sugar and salt in a food processor.  Pulse 2-3 times to blend.  Add butter and pulse 10 times or until the mixture resembles coarse meal.  With the processor on, slowly pour ice water through food chute, processing until just combines (do not form a a ball).

5.  Brush beaten egg over the exposed dough.  Sprinkle with 1 tablespoon sugar.  Bake at 375 degrees for 45 minutes or until the filling is bubbly and the crust is lightly browned.  Let stand 30 minutes before serving.
Peaches The Complete Cooking Light Cookbook