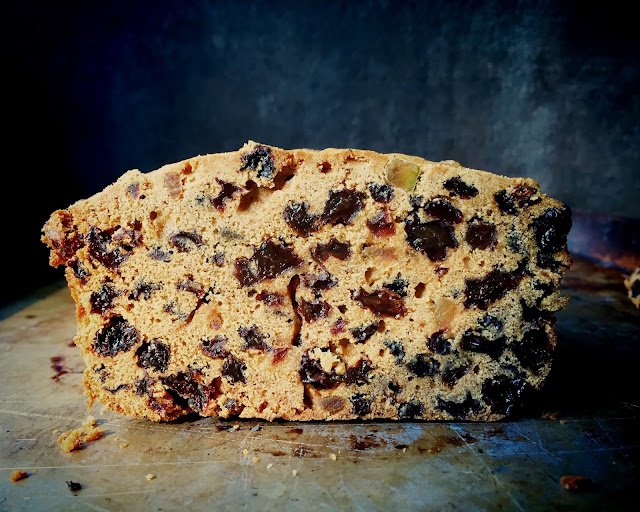 There are certainly so many poems by Emily Dickinson to celebrate, but there's one that just won't get out my head: 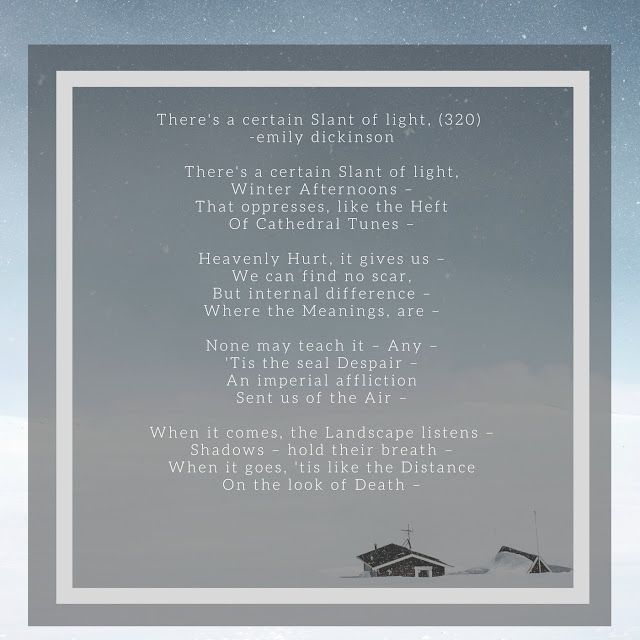 So there you go. It's winter. It's excruciating. Sometimes the light slants just the right way in winter and, well, you start to contemplate just what it is that will make us stand with the landscape and the shadows and, simply, listen. Even if what we hear or see is just for a moment. Like a held breath. Like a slant of light. And then it goes.

Well, this post took a turn I was not expecting. That's pretty much what we get with Emily. An opening line that draws us in and an ending line that punches us in the gut. 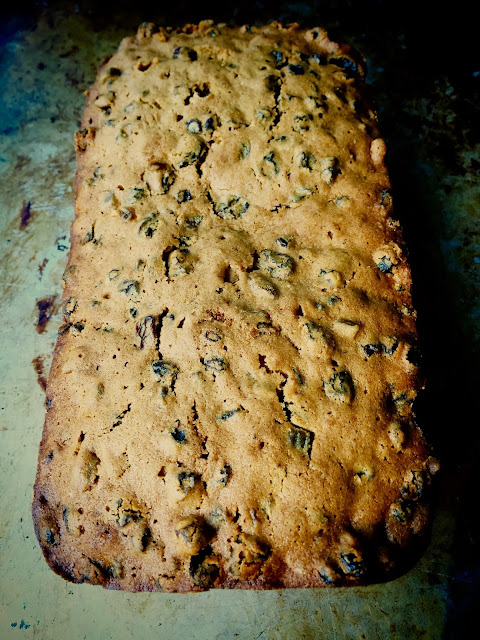 But I do think she was a little more lighthearted than this. Or at least she was from time to time. And her black cake suggests that girlfriend knew her way around the kitchen. And there may have even been some real joy there.

Let's take a turn away from the existential (although one may argue that the fruitcake is the existential, and who am I disagree?). Admittedly, I love fruitcake. I love sugar and cake and booze. All separately. And even more so together. And Emily, though she may have shrunk from company, knew how to make a great fruitcake for a crowd. 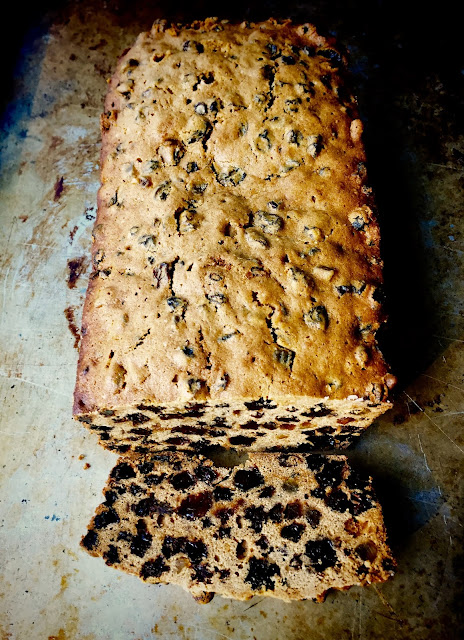 Certainly I am hardly the first to venture into the great Dickinson's Black Cake. If you spend any time looking around, you'll see that Emily's cake has been popular this century. But the most entertaining were these ladies in the library at Harvard, who agonized over citron (I didn't: I'll admit I used candied citron found at my supermarket) and weighed the possibilities of a "receipt" with no measurements regarding the cinnamon, the nutmeg, the mace, or the cloves.

They also have some Queequeg Spiced Rum in the background of their pictures. I appreciate those who marry all of the 19th century's literary heroes to some form of booze. Emily to brandy. The character from Moby Dick to spiced rum. Nice work. 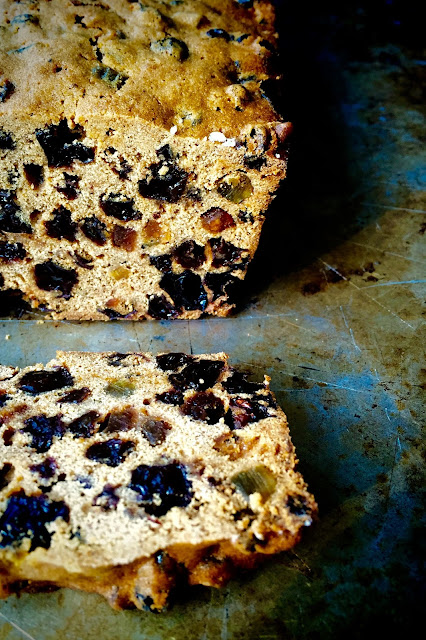 Her receipt (recipe) is spare and clear. Add a few hyphens and it would read like a poem itself.

Greg Patent, who put together this version of the black cake, scales back from the recommended 2 butter (is that 2 pounds, Emily?), 19 eggs (!), and 5 pounds raisins.  Nonetheless, we find ourselves here with a fruitcake of still epic proportions--enough to make 2 loaves. One to keep. And one to reluctantly give away. Which I did. Because after the new year, I think I have to give up brandy and raisins and candied citron. It's going to be carrots and hummus for me.

Think you're up to the original? Here's a glimpse Emily's requisition: 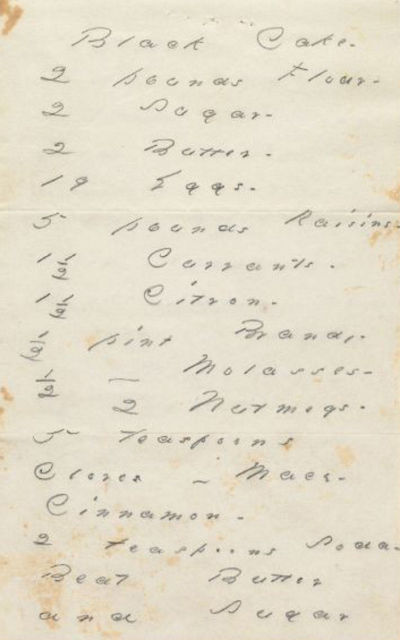 (You can find the whole manuscript with instructions here.)

And while Emily teetols at only ½ a pint of brandy, I made some modifications. You may begin gasping now and clutching your pearls given my blasphemy.

I justified my actions as such:
It totally makes logical sense. You're with me, right? 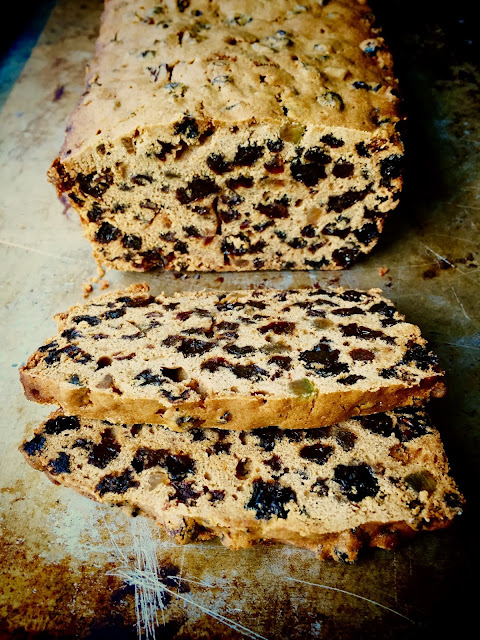 And I'll admit that in addition to the haunting winter poem from Emily,  another thought was on my mind: I kept thinking of visits I have made to authors' homes. I have not yet been to Amherst. However, I have toured Melville's home, where we were invited to ooh and ahh over Melville's quills and glasses. I was a bit jaded, I'll admit.

However, when I went to Steinbeck's home in Salinas, there was a cupboard with Steinbeck's whiskey. I felt as if this was a man I could get behind.

So I was thinking about what would be in Dickinson's house. A writing desk, to be sure. Perhaps some delightful curio. But I'll admit that I can think of no object I would want to admire. Instead, I have been thinking about her biceps. Seriously. Try to imaging whipping ½ a pound of butter. Then add 8 pounds of fruit. All without an electric mixer. My only conclusion: Emily must have had strong arms. 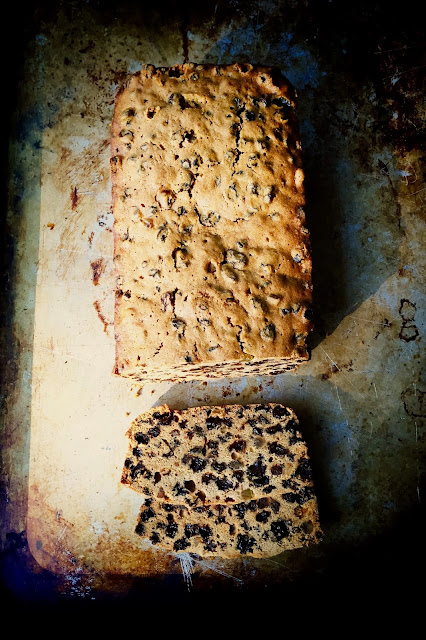 Okay, all pondering of winter light and a poet's biceps aside, let me advise you to make this lovely fruitcake one last time before the holiday season has fully passed us by. The molasses makes this cake dark and sweet and just the slightest bit bitter. The black raisins and currants add a syrupy taste that you cannot get with any other fruit. And the brandy adds just the right kick. There's just enough time to get this cooked before the new year. And the good thing with a fruit cake is--well, it'll still be good come July.

This is a cake with a little bit of staying power. Unlike the excruciating and exquisite winter light. 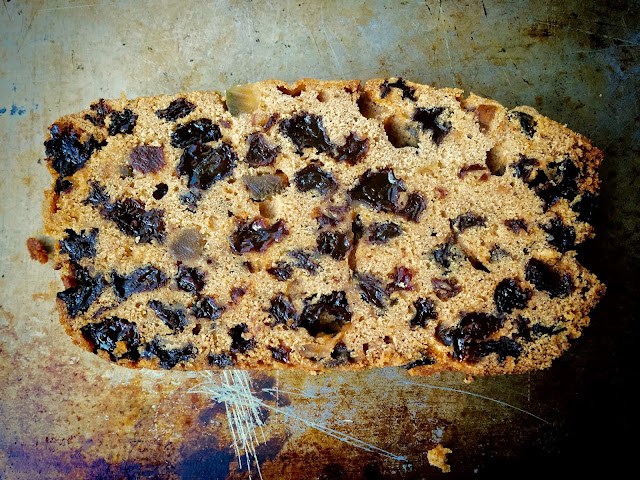 Liberally adapted from Baking in America

Instructions:
1. Combine the fruits and brandy is a 2-quart jar with a screw top or a 1-gallon zip-top bag. Let stand at room temperature for at least 24 hours, preferably 2-3 days, turning the jar or bag several times a day.

2. Adjust one oven rack to the middle and one to the lowest position. Preheat the oven to 250 degrees. Butter two loaf pans. Line the bottom of the pans with parchment paper and butter the paper or liberally butter or "Pam" the baking pans. Set aside. Place a 13x9 inch baking pan half-filled with water on the lower rack of the oven.

3. In a medium bowl, sift the 2 cups flour with baking soda, salt, nutmeg mace, cinnamon, and cloves, and set aside.

3. In a large bowl, beat the butter with an electric mixer on medium speed until smooth, about 1 minute. On medium-high speed, beat in the sugar, 2-3 tablespoons at a time, beating for about 20 seconds after each addition. Then scrape the bowl and beaters and beat for 5 minutes.

5. On low speed, add the flour mixture in 3 additions, alternating with the additional ¼-cup brandy, beginning and ending with the flour and beating only until each addition is thoroughly incorporated. Beat in the molasses.

7. Place the pans on the middle oven rack and bake for 2 hours. Remove the pan of water and bake the cakes for another 1-1½ hours, until they spring back when gently pressed and a toothpick inserted int the center comes out clean. Place the pans on a wire rack and cool completely.

8. Run a  sharp knife around the edges of the cakes to release them, and invert the pans onto the counter top. If the cakes don't fall out right away, rap the pans sharply on the counter. Lift off the pans, and peel the paper off the cakes (if you used parchment paper). Brush each cake with a spoonful or two of brandy before wrapping them in plastic wrap and then in foil.

9. Refrigerate for up 3 months (or freeze up to 8 months). To serve, place each cake with its bottom side up on a cutting board, and cut into thin slices with a sharp serrated knife.
Baking in America Brandy Butter Citron Cloves Currants Eggs Flour Molasses Raisins Sugar Whiskey