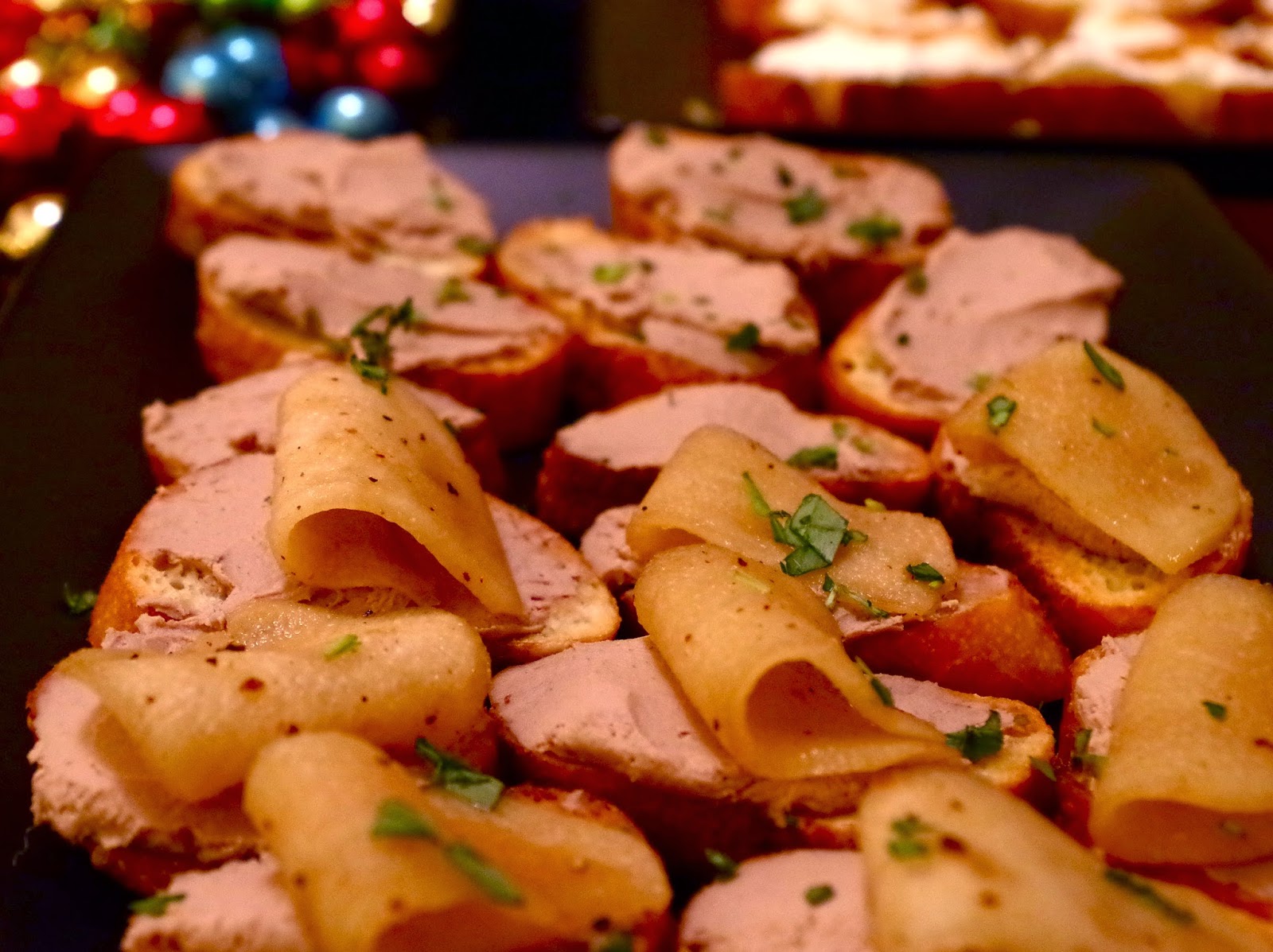 Oh, pâté, how I love you. We have had a relationship for years, mostly because first I ate you in your truffled form, thus establishing a love of you in your most expensive state. Then I ate you in your country form, thus establishing that I love you any way you come. Then I just ate you whenever I could, while still trying to exhibit some restraint. Consequently, when Christmas Eve dinner rolled around and I saw you staring back on me from the pages of Donna Hay's Entertaining, I knew we were destined for one another. 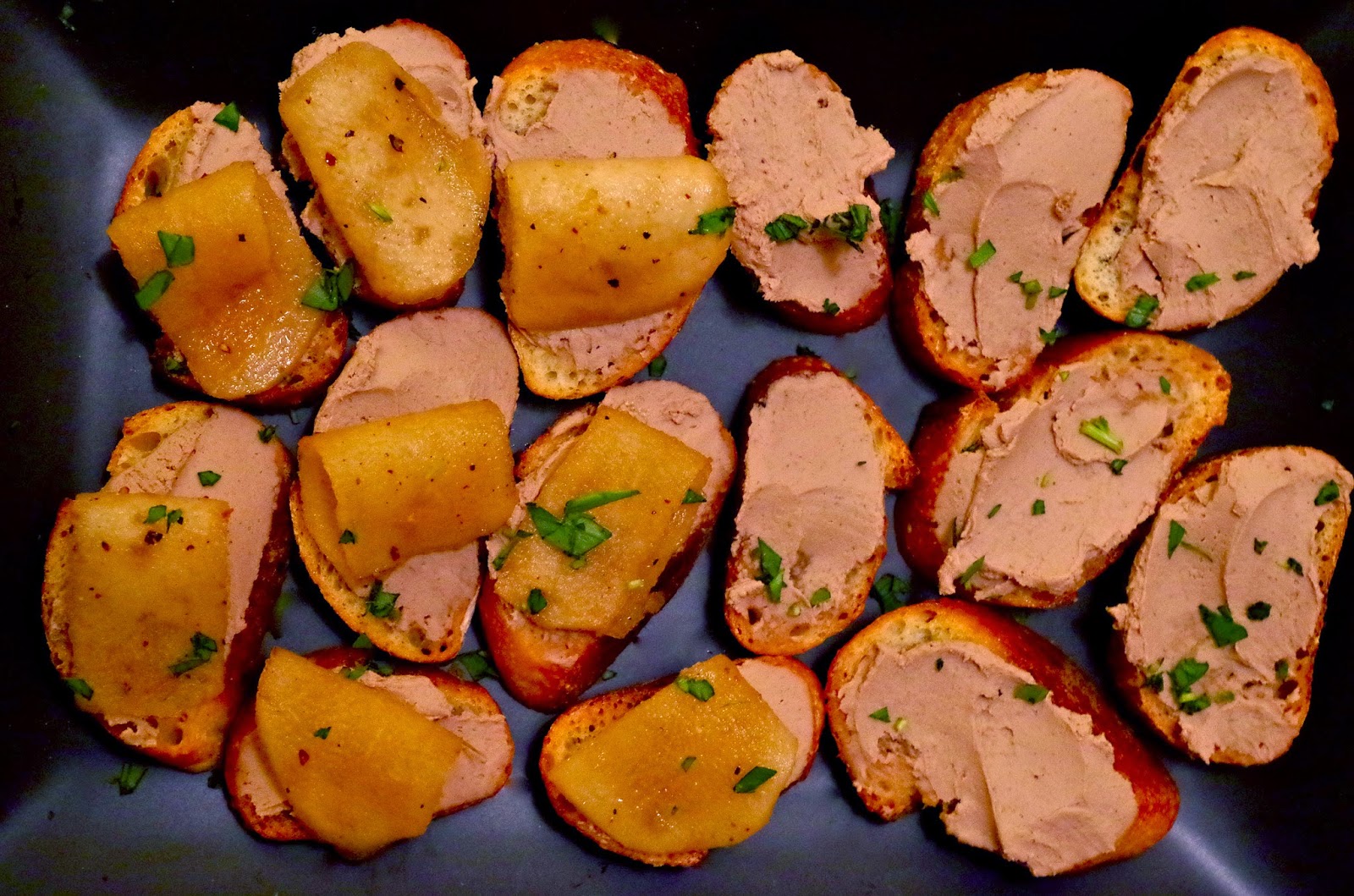 I couldn't find duck livers for you--in part because of my poor planning on the day before Christmas when everyone and their neighbor happened to be at the grocery store purchasing their last-minute supplies. Instead, we had to go with chicken livers. I think we did alright in the end.

Then, I needed to purchase cognac, a liquor that I know little about. However, a very nice, very young man at the liquor store told me that cognac is simply a very specific grape brandy, is made only in France, and is terribly expensive.  That said, you can buy some very fine local brandy that is purported to be the best cognac in the world (and not even by the company that makes it!). I was sold, mostly because I wanted only the best for you. 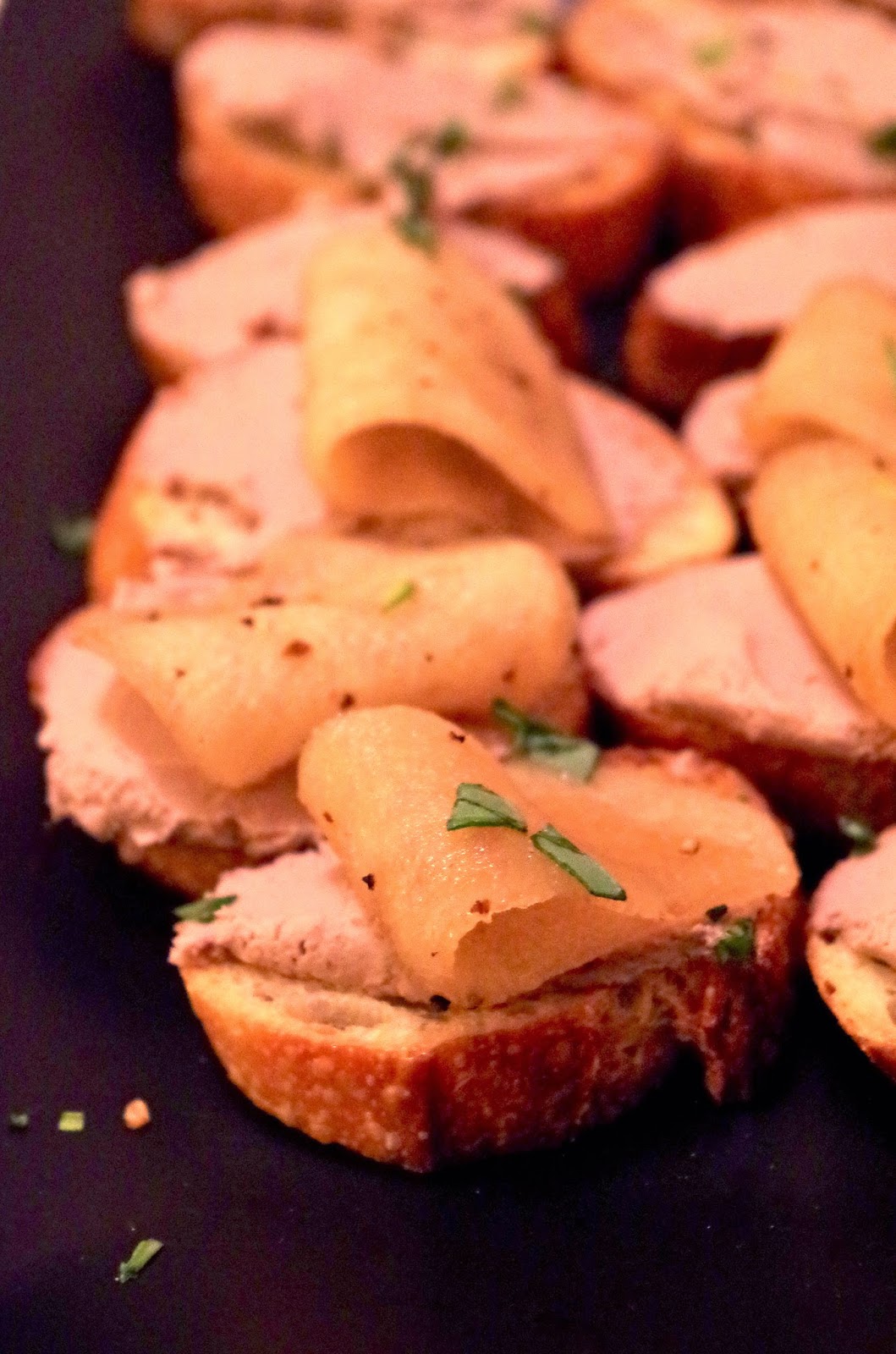 I soaked your livers for two hours in said cognac, and I sauteed you until you were still pink in the middle. I blended you, pressed you through a fine sieve, chilled you, and then topped you with pickled and peppered pears. I'll admit, I had my doubts about the pears, which I thought were a bit tart, so I put the pears on only half of your crostini, but I now know that I was wrong, so wrong. The pears were perfection, adding that sweet, acidic sourness that a cornichon would normally add, and you enjoyed that added flavor bomb to complement your mellow sweetness.  You and the pears, well, you were meant to be. 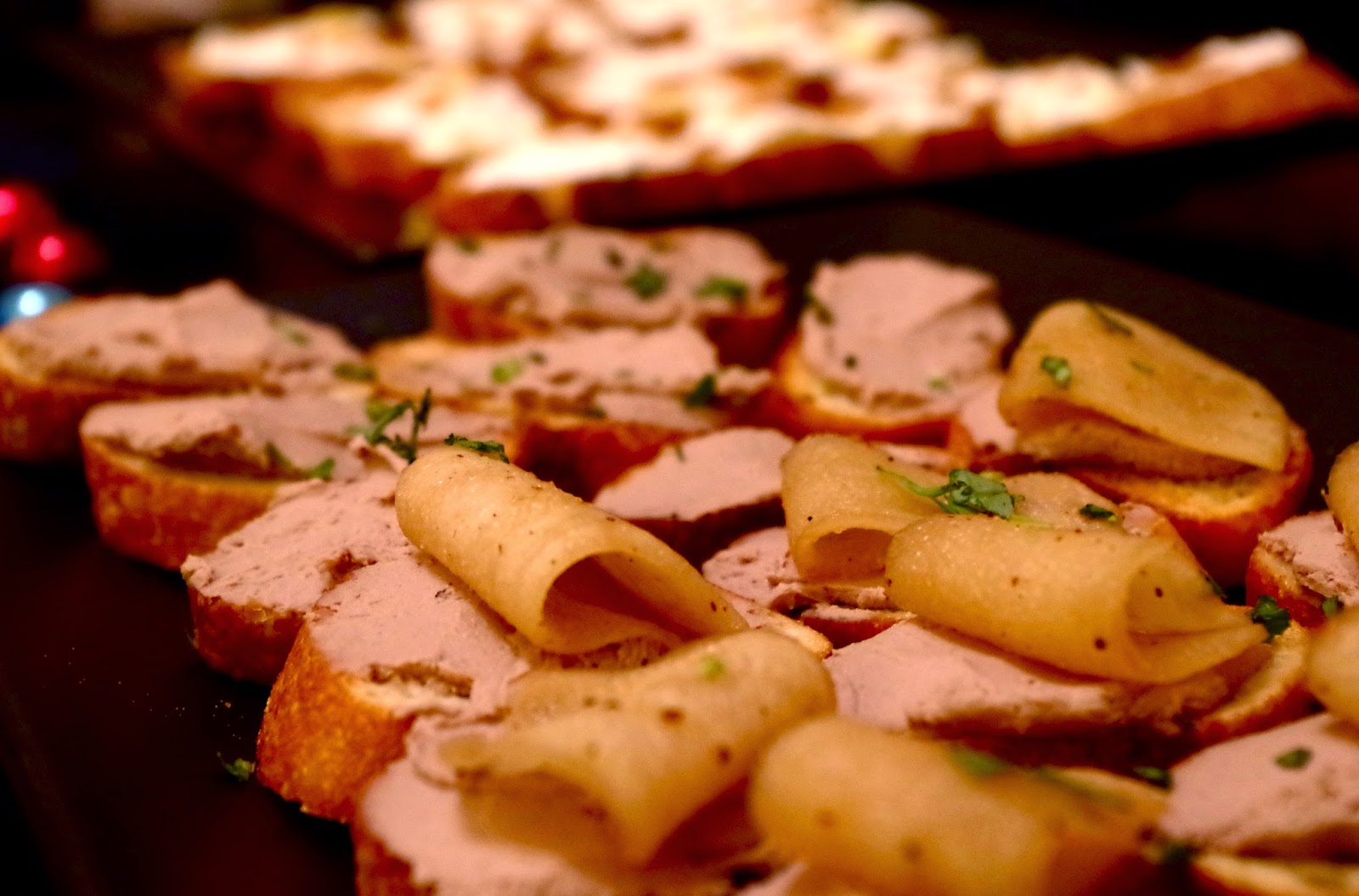 Further, as we all gathered around the in-laws' living room table with our glasses of wine and with Christmas music on the stereo, you became French-approved. Indeed, one of the other guests was a Breton who sadly bemoaned the inability for one to acquire foie gras in the state of California--a pâté that announces Christmas in France.* While you were no foie gras, you were a tasty addition to our holiday repast, and I have (admittedly) been eating you on toast for the past two days. I need to be careful: while you are delightful on the tongue, you will not be delightful on the waistline. I will give you up soon. Just not yet though.

*Indeed, I am well aware why your cousin, foie gras, is no longer available in California, and while I do miss the taste, I am in support of its ban. 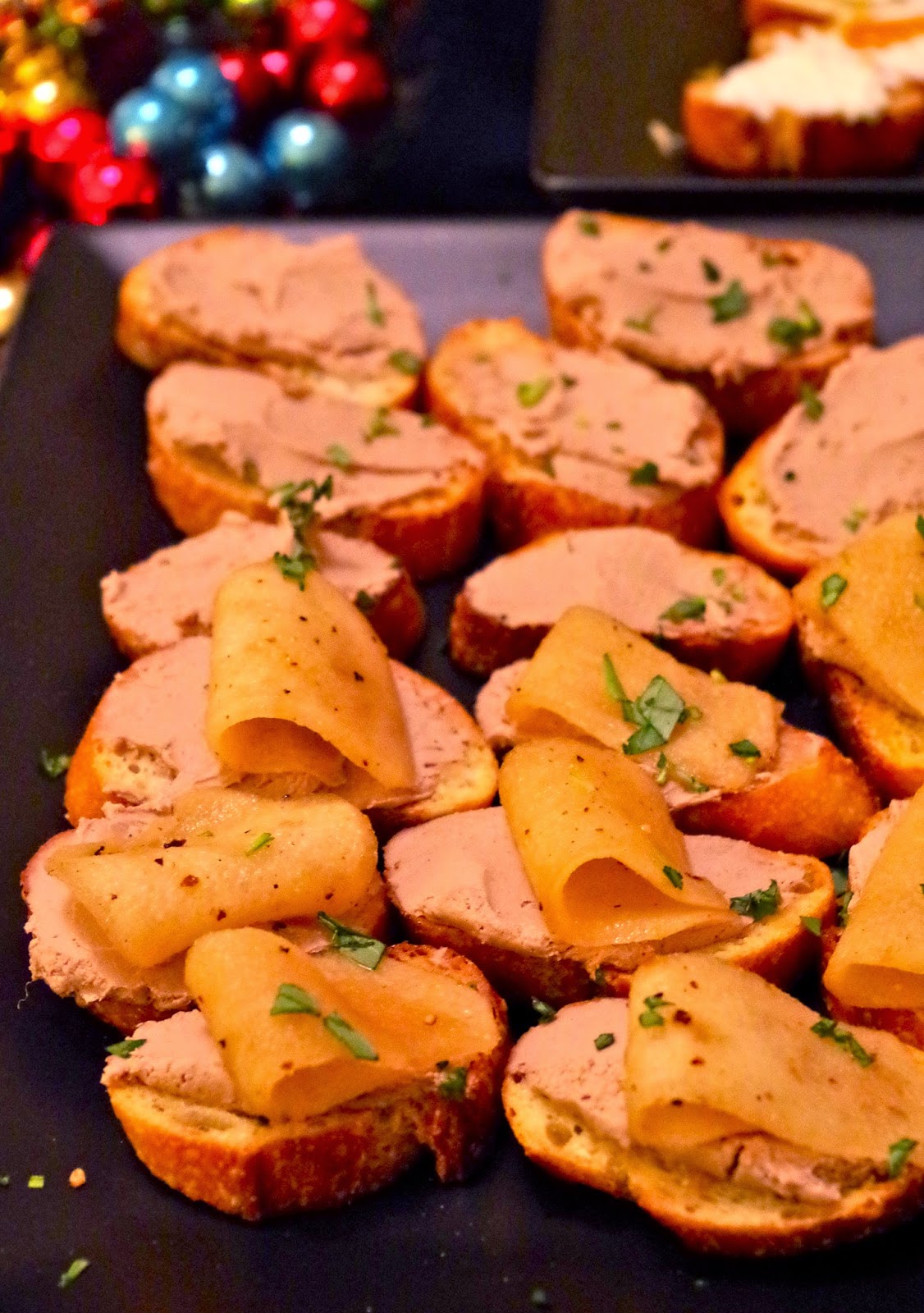 Finally, because your recipe proportedly serves 12, which I think is perhaps even a little low, I happily gifted more than half of you to the father-in-law, who also loves pâté like I do. May he now share the wealth of having to go to the tailor in order to have his pants let out.

All because of you, my dear, fatty friend.


Instructions:
To make the duck liver pâté:
1.  Remove any discolored or tough white parts of the liver. Place the livers in a bowl with the cognac and refrigerate for 2 hours.

2.  Heat the butter in a large frying pan over high heat until bubbling. Drain the livers, reserving the cognac, and add the livers to the pan. Toss the livers in the butter and cook, covered, over medium heat until just cooked through, 5–7 minutes. Remove from the pan.

To make the peppered pears:
4.  Peel and thinly slice the pears (I used a mandoline, which was a lovely way to get very thin slices).

5.  Place the cider vinegar, balsamic vinegar, sugar and pepper in a frying pan over low heat and stir until the sugar is dissolved. Add the pears and allow to simmer for 1 minute. Remove the pan from the heat and allow the pears to stand for 1 hour