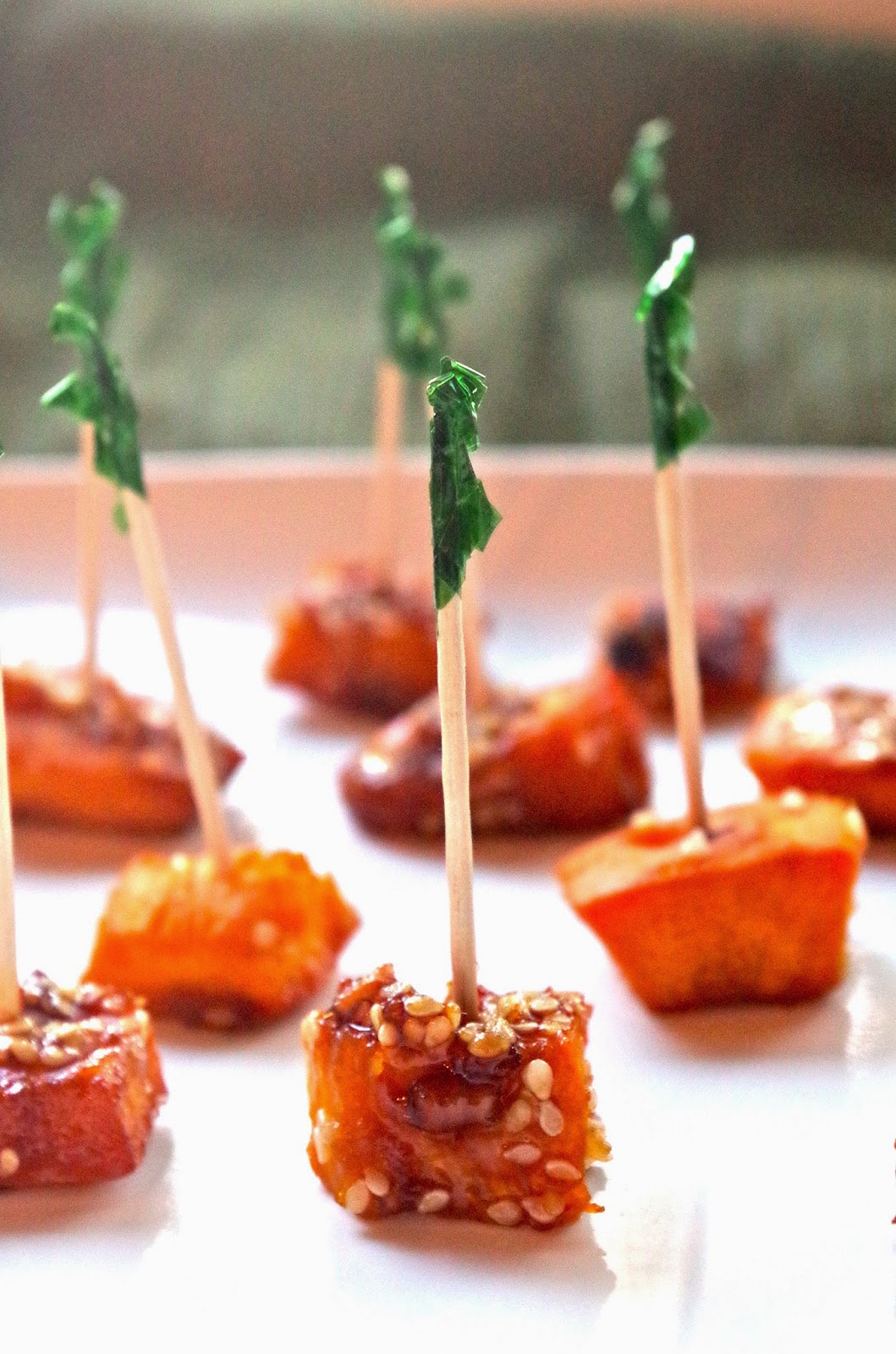 As you may know from such features as my "about page," this blog is about to become officially five years old. Five years?!  Yep.  In celebration of 2015 and of five full years, I am going back to my original impetus for the blog.  Five years ago, I cooked page 210 from every cookbook I owned (given that the probability of finding a 2010-page cookbook, while not impossible, seemed tricky). I cooked things I had never cooked before and discovered that I like liver, boar, duck, and lamb but not squab. I made mistakes. I made very simple recipes with absolutely atrocious photography. What fun all that was.

So, for 2015, I am cooking page 215 (unless the cookbook has fewer than 215 pages, and then I am cooking page 115 or (in the case of one little soup cookbook I have) page 15). If there is no recipe on page 215, then I am cooking whatever comes closest to page 215.  And indeed, I am getting an unofficial jump on the new year--in part because I have more than 52 cookbooks now (thanks to my beloved family and friends who supported this blog both by eating food from and by gifting me multiple new cookbooks, and thanks to my undeniable used-cookbook purchasing habit--alright, and some new ones, too). While the task seems daunting, I do hope to make it through all of the cookbooks this year. 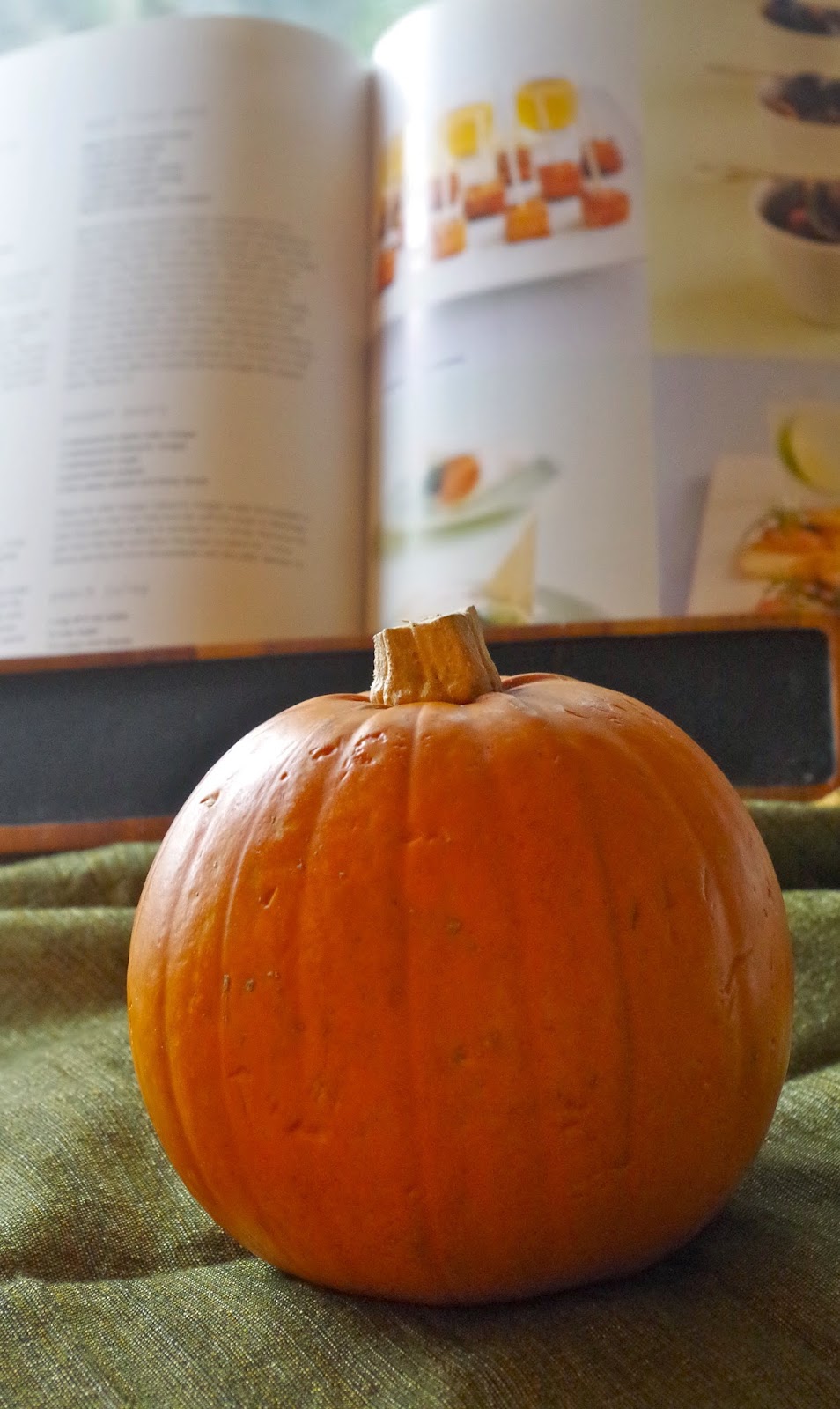 Anyway, let's stay ensconced in 2014 for two more posts (I have one planned for New Year's Eve Day, when I plan to finally bake some bread whose dough I have had languishing in my fridge for a few days). We were charged with appetizer making for Christmas Eve dinner, and so I turned to a new (old) cookbook. I really like Donna Hay. Consequently, when I was at my local used bookstore and I saw that someone had gifted three Donna Hay cookbooks to their shelves, I had a hard time choosing only one. I managed to display some restraint, and I chose Entertaining. Nowadays, you can find it for a song on amazon (given that it is out of print), but see if you can find it at a used bookstore first.


This recipe, admittedly, does not come from page 215, proper; thus, I feel okay with posting it a little early. First off, there is no page 215, and on page 115, Hay gives a series of menu suggestions, including pre-dinner drinks for 8, where these sesame and soy pumpkin morsels play a role. Also on that menu: Pimm's Citrus Crush and Classic Champagne Framboise. I believe those may have to be the official entries for 2015. This blog needs more drinks recipes, don't you think? 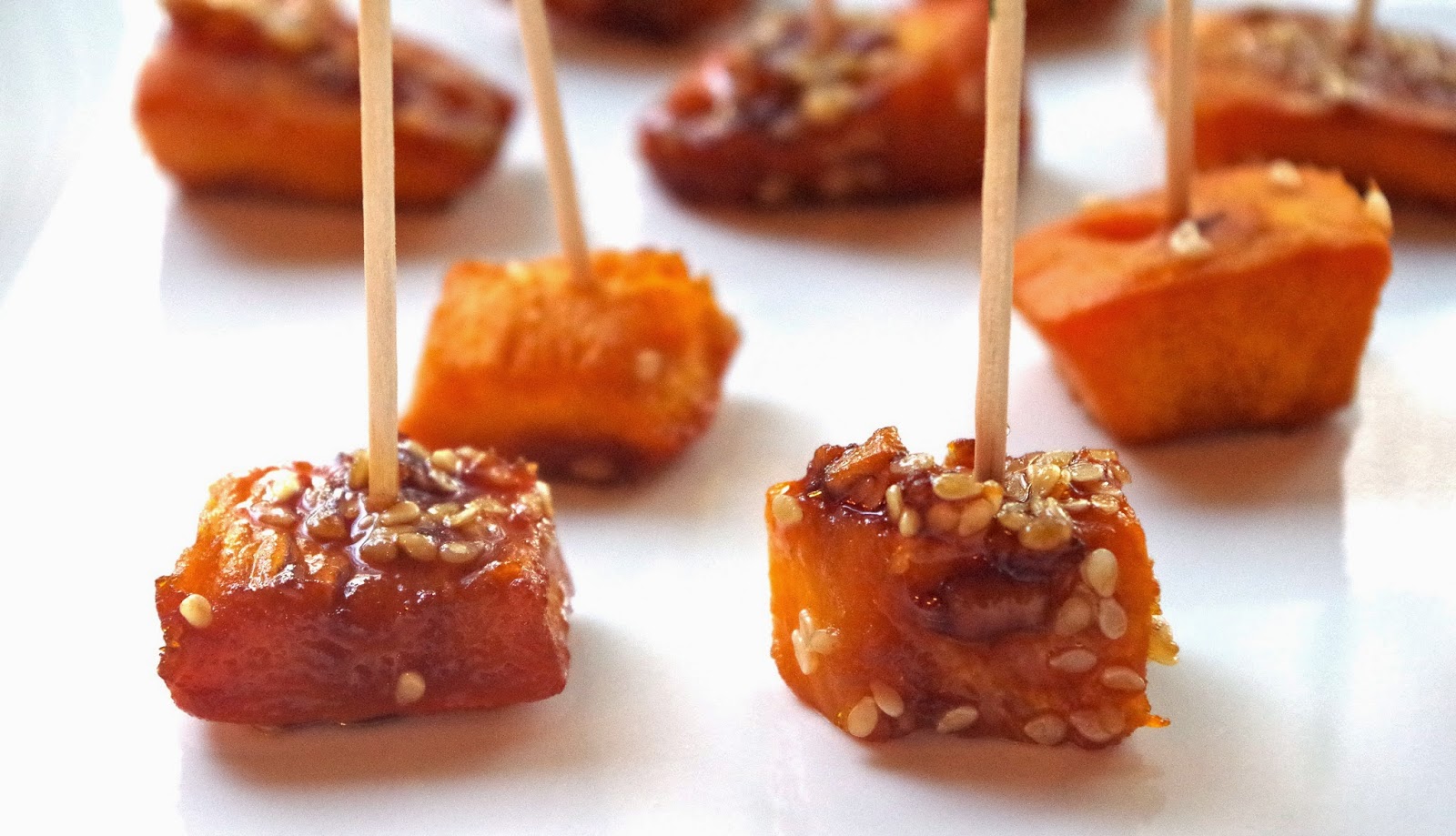 I am just going to come right out and say this: I wanted to like these little pumpkin squares more and I have lots (okay, three) of thoughts on how I would.

First, I needed to cut the squares larger--which was impossible given the size of my little pumpkin (indeed, I sliced them as thick as my pumpkin was)--just so that there was more pumpkin to offset some of the sauce. The sauce, which was quite yummy, was just a little salty and intense given the amount of pumpkin per bite.

Second, I would add a little more honey to the sauce, for my pumpkin wasn't as sweet as I would have hoped. Thus, I have added the additional note of tasting your pumpkin before saucing it. 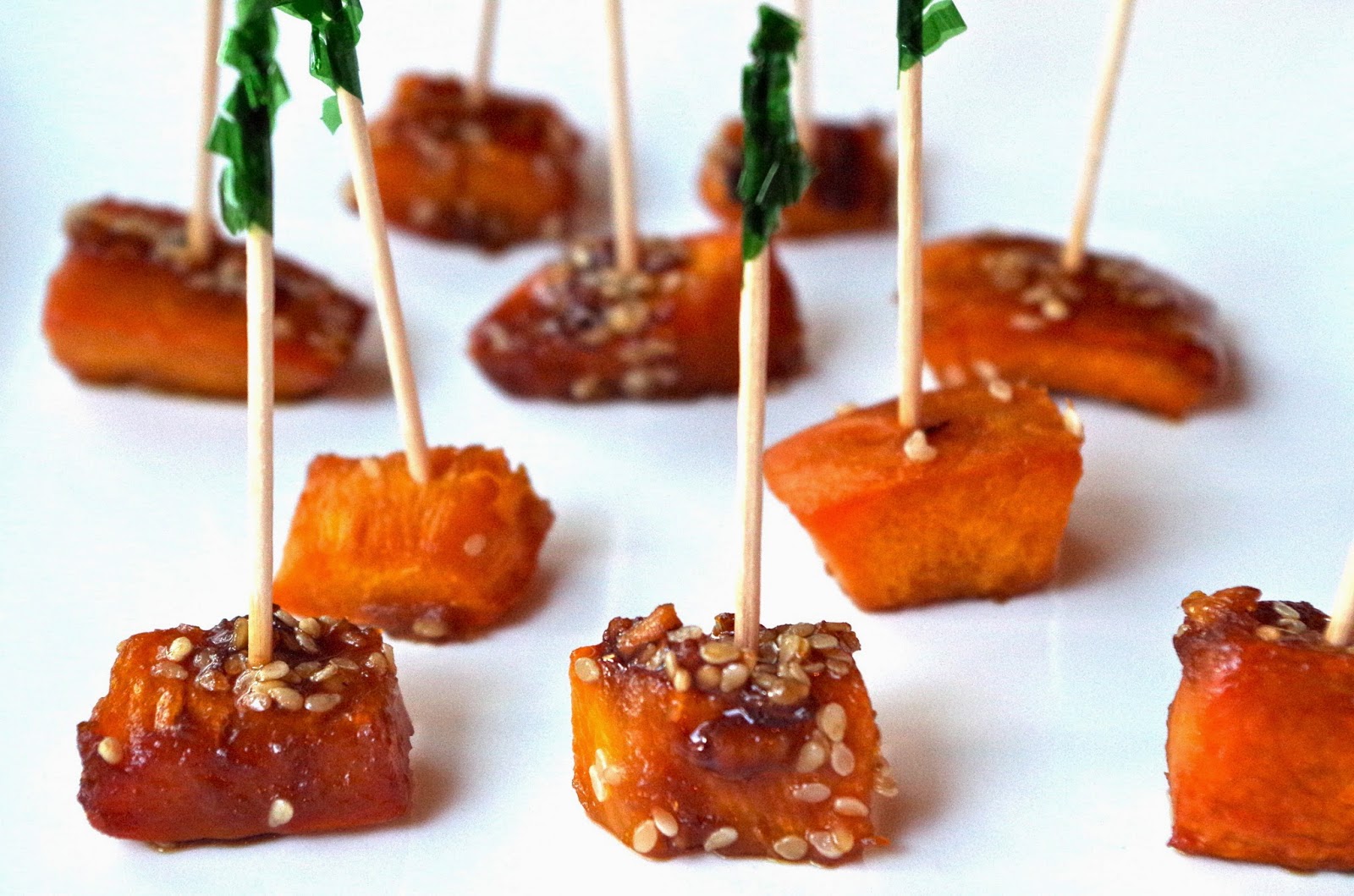 Third, definitely serve with other appetizers that cry out for balancing salt bombs (like these are)--I served these with pâté as part of a holiday appetizer spread, and the pâté was heavy enough that it needed something light and fresh to offset it. Perhaps serve these with lettuce wraps or edamame or a simple fish (like seared tuna). Hay recommends serving with balsamic fig bruschetta.  Had I been able to find fresh figs, I would have served those as well.

That said, there were none left over at the end of the appetizer round. Let's not sell these little pumpkin squares short. My fiddling with the recipe or thinking about its presentation may well be for naught, for these are, indeed, tasty little, salty nuggets.

And now, it's time to roll up my sleeves, for we have a lot of cooking on the docket for this year. One more entry coming at you on New Year's Eve Day, and then it's time to dive deep into my cookbooks again!

One Year Ago: Pork Loin Braised in Milk Bolognese

2.  Peel the pumpkin, cut into bite-sized pieces (aim for inch-sized pieces), and toss in olive oil and salt. Place in a single layer in a baking dish and bake for 25 minutes or until tender.  Remove from the oven and cool for 5 minutes.

3.  Combine the remaining ingredients (honey through wine/sherry). Place in a large frying pan over medium heat and allow to simmer until quite syrupy.

4.  Taste the pumpkin; if it is not particularly sweet, add a little more honey to the sauce. Otherwise, add the pumpkin a few pieces at a time to the sauce, and toss gently to coat.

5.  Remove the pumpkin from the pan and place on a baking tray lined with parchment paper. Reduce the oven temperature to 300 degrees. Warm the pumpkin again for 5-10 minutes. Serve with toothpicks.