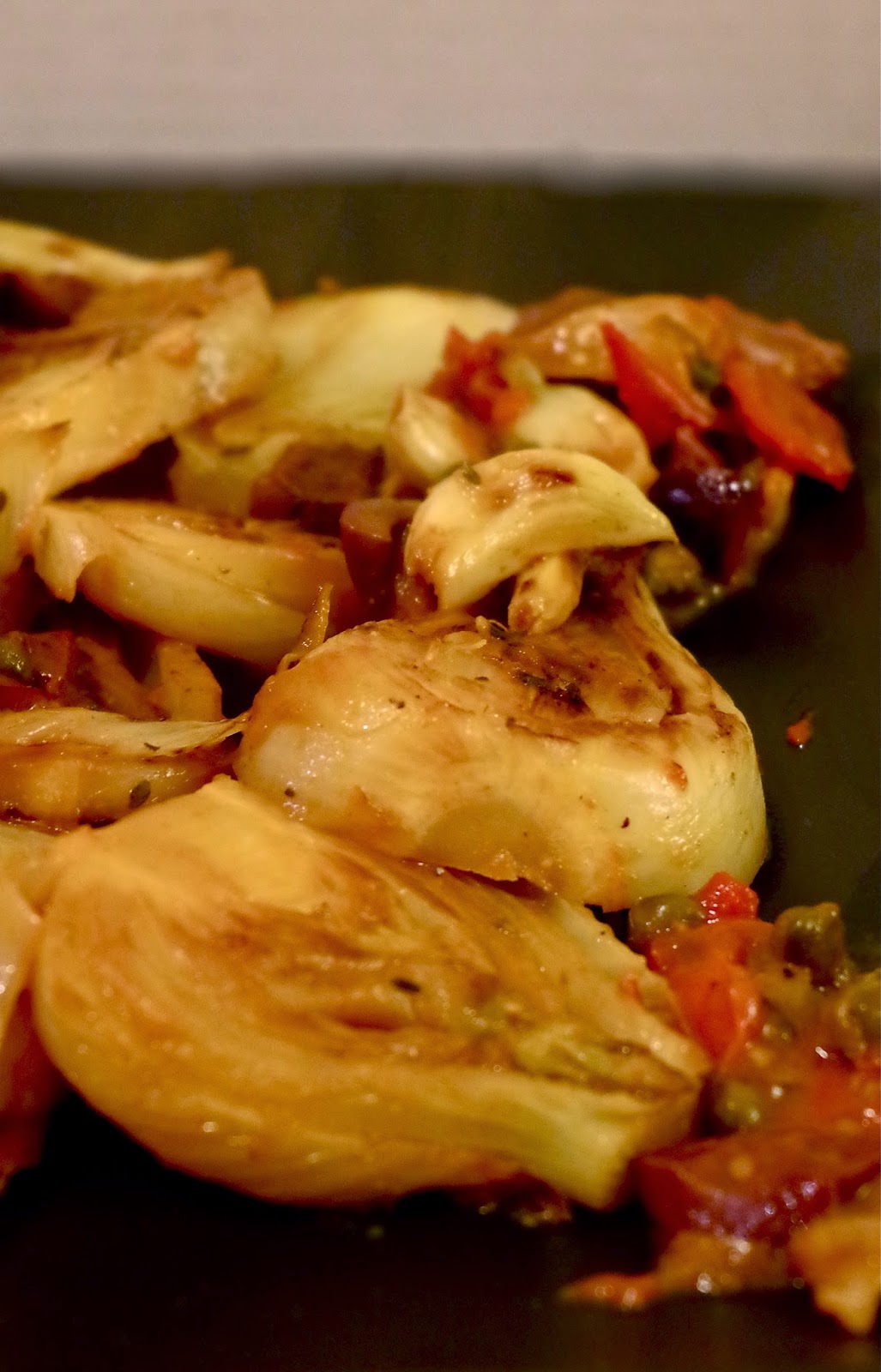 In a move that should surprise exactly no one, I bought the latest in Ottolenghi cookbooks, Plenty More. In fact, I pre-ordered it, and I have been cooking from it non-stop since its arrival two months ago.

This cookbook has much going for it. Not only is it yet another in a slew of vegetarian cookbooks that I have come to love, but it is also the fourth in (what I hope to be a much longer) line of wonderful Ottolenghi cookbooks. It's true. I like the rest of the world am fully buckled onto the Ottolenghi bandwagon.  However, it is for good reason. His recipes are surprising in their flavor profiles, his meals are fresh and satisfying, and (let's face it), he's a darned good writer (not only of recipes but of headnotes).

In fact, in the headnote of this very recipe, Ottolenghi reports that fennel is resplendent. Resplendent!  That's a lot of praise for a mere vegetable that grows on the side of the road 'round these here parts. 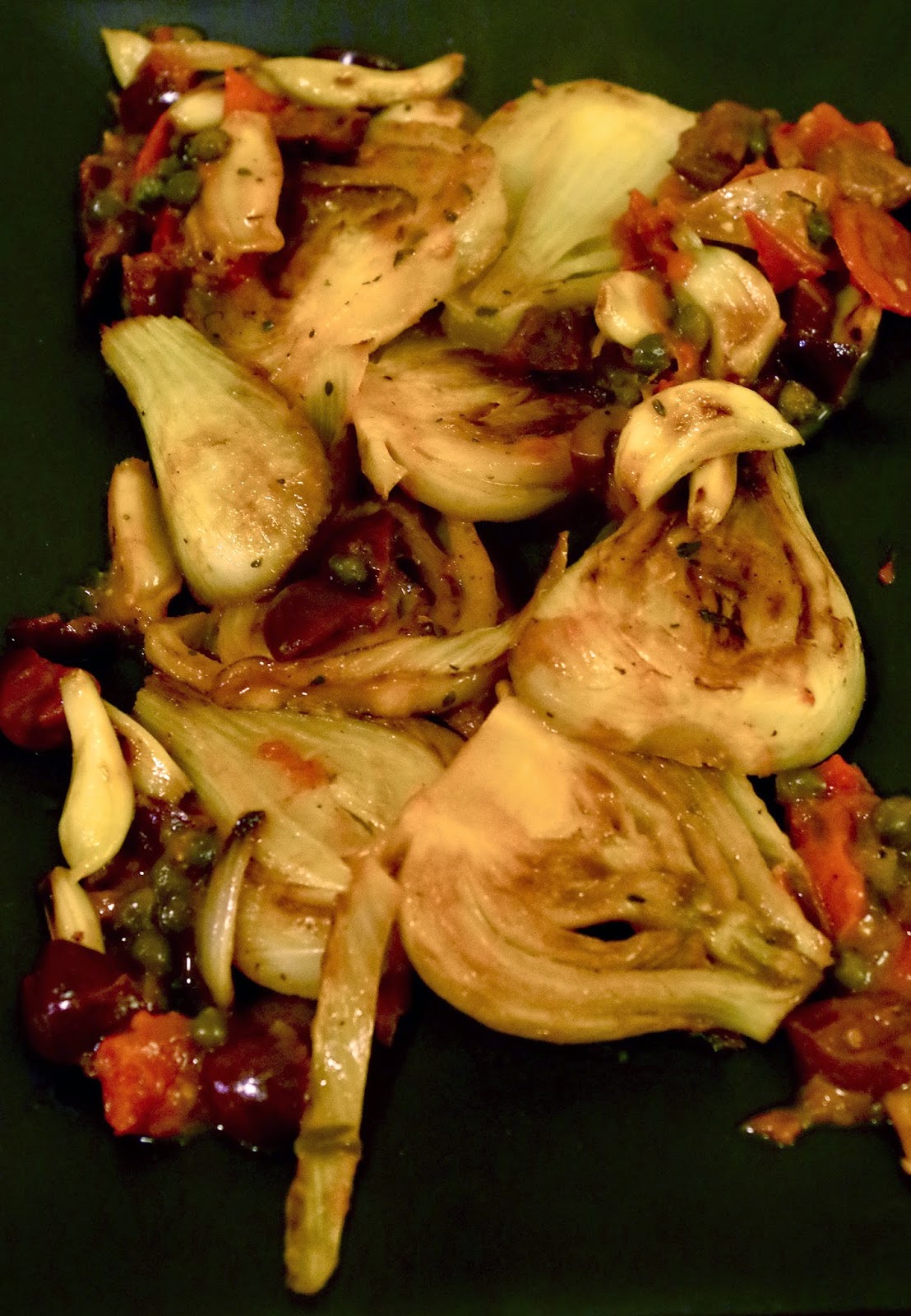 And indeed, if you find yourself near some of that wonderfully aromatic fennel, go ahead and snatch it up. It has a sweet, licorice crunch when raw and a savory roundness reminiscent of celery when cooked. To boot, fennel is often associated with that jolly carouser of a god, Dionysus, and legend has it that knowledge was passed from Prometheus to man through a coal carried on the stalk of fennel.  That not enough for you?  Roman warriors munched fennel to make them strong (and some say to keep thin). Charlamagne decreed that fennel be grown in every garden for its healing powers. And let's not forget that while fennel (probably due to its abundant vitamin C) was lauded by Pliny for its ability to "mundify our sight," fennel is a key ingredient (along with wormwood and anise) in absinthe, that elixir known for robbing its imbibers of their sight.

As for the recipe itself, the sauce is basically a modified Puttanesca, which is one of my favorite sauces, hand's down. Delightfully, the salty tang of capers and olives plays well with the fennel. I halved the amount of fennel (for I like a lot of sauce, and I would argue that you may wish to double the sauce below. More sauce is never, ever an issue). Overall, this braised fennel dish is mouth-wateringly sweet, salty, and savory.

1. Trim the tops off the fennel and cut each bulb from top to bottom into thick slices.

2.  In a large frying pan for which you have a lid, heat 1 tablespoon of oil on a medium to high heat. Add half the fennel with some salt and some black pepper. Cook for five or six minutes, turning once, so the fennel is nicely browned on both sides; remove from the pan and repeat with the remaining fennel.

3.  Keep the empty pan on the heat, add the garlic and fry for three minutes, tossing occasionally, so the skin is scorched all over. Lower the heat to medium, carefully add the verjus (or lemon and vinegar) and reduce for a couple of minutes until there are about two tablespoons of liquid left in the pan. Add the tomato, 1/4 cup of the stock, the capers, olives, thyme, sugar, some salt and black pepper. Bring to a simmer, cook for two minutes, then return the fennel to the pan. Add the remaining stock, put on the lid and leave to simmer for about 12 minutes, turning once during the cooking, until the fennel is soft and the sauce has thickened. (You may need to remove the lid and increase the heat for the last two or three minutes.)

4. Place slices of fennel on each plate, spoon over the sauce and serve with a spoonful of ricotta (if using) and some freshly grated lemon zest. Finish with a drizzle of olive oil and serve warm or at room temperature.
Capers Cheese Fennel Garlic Lemon Olives Plenty More Sugar Tomatoes