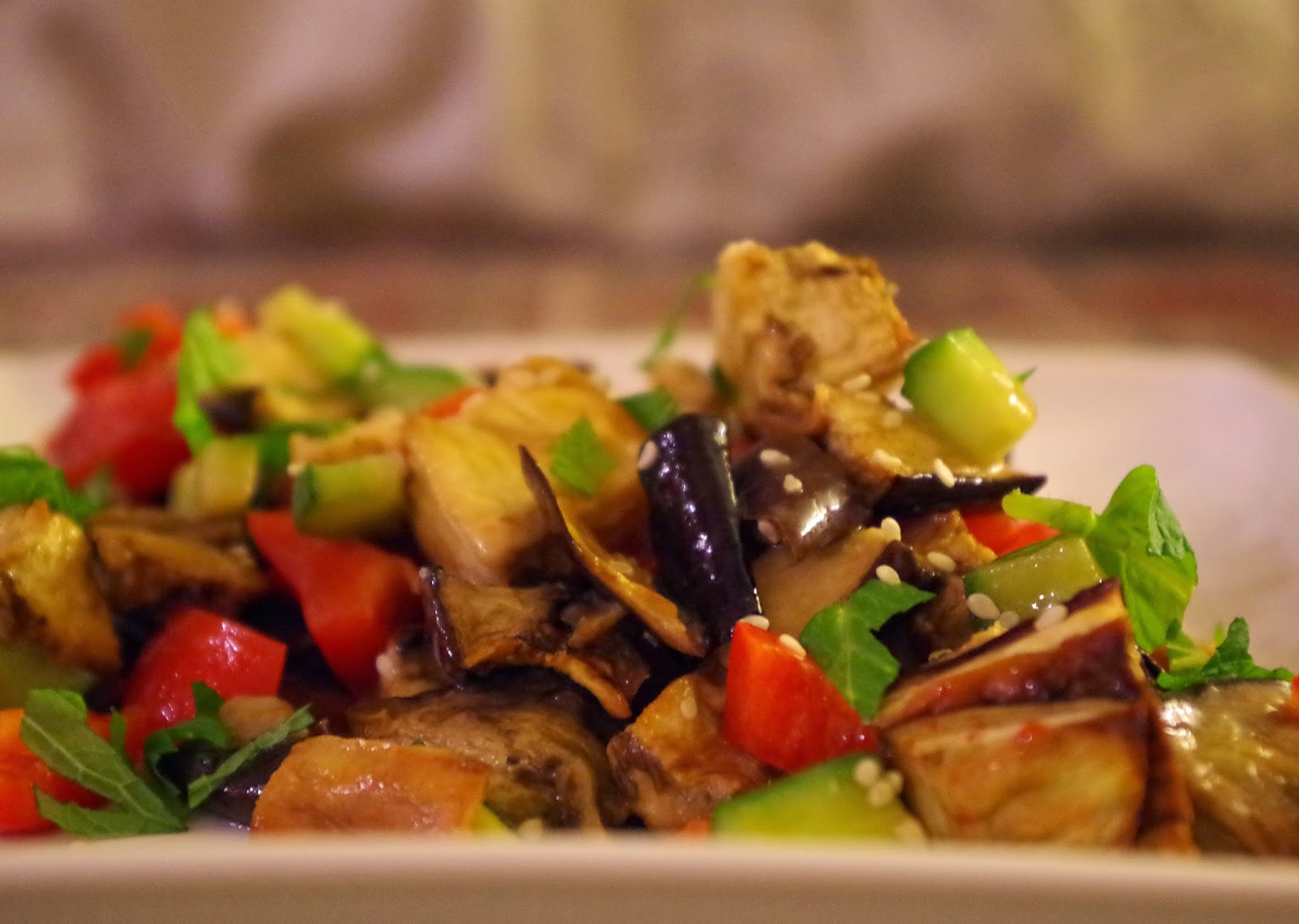 Another vegetarian cookbook, you say?  The husband brought this cookbook home last month as a surprise from Market Hall, our favorite European-styled market in the neighborhood.  Also the only one.

You may remember Mollie Katzen from your dog-eared copy of The New Moosewood Cookbook (1977). You also may not have opened this cookbook for a decade, as you have moved to lighter fare rather than the hearty vegetarian fare of that disco decade. Katzen shares in this lighter approach to her recipes--and in a lovely article from The New York Times, she reveals her recent interest in the simpler way of cooking (she even admits one of her favorite things to eat is a pairing of cut peaches and tomatoes whose juices are sopped up with good bread). Certainly Katzen has been publishing a multitude of cookbooks since 1977, but it is nice to have one of her new cookbooks in hand.

This cookbook is definitely not twee. You'll find nothing precious here: asparagus with ginger and soy; root vegetable stew; macaroni and cheese (with some additions such as caramelized onions, roasted cauliflower, or spinach and mushroom); simple vegetable mashes. As is to be expected, though, Katzen does produce some unusual combos--for example lasagnas with no sauces to bind them (only cheese), green beans with edamame and peas atop baked potatoes with cheese, and blueberry rice. However, I come to Katzen not for fine dining but good, everyday fare, and this cookbook does not disappoint. 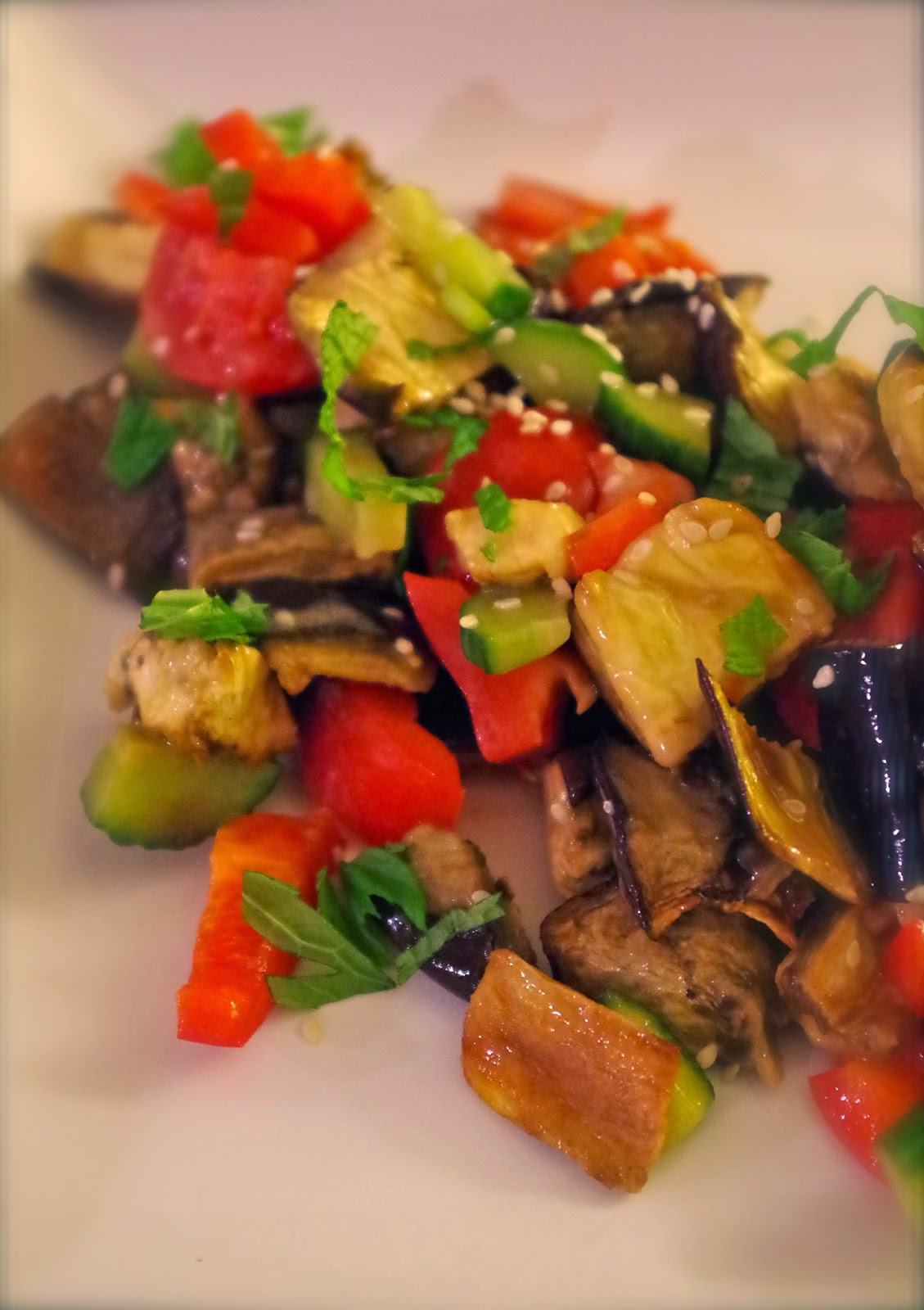 I chose this recipe even though it is the wrong season for eggplant--even in California we're on the tip of the tail end of eggplant season. However, I couldn't resist the combination of veggies, coconut, lime, and mint. Mostly because I like coconut milk.

But it's not often that I cook with it. What, with the sheer amount of saturated fat, coconut milk is a special treat for me. Its richness comes with a price--coconut milk packs a punch of 445 calories and 48 grams of fat (43 grams saturated) per cup. Thankfully, this recipe calls for only 3 tablespoons of coconut milk, and Katzen recommends freezing the leftover coconut milk in an ice cube tray for later consumption, which I have done. Further, you can opt for the "Lite" version of coconut milk (which cuts the calories and fat down by 2/3).  However, coconut milk does come loaded with plenty of fancy vitamins and minerals, including magnesium, manganese, phosphorus, and potassium. Apparently, these things are good for strengthening bones, calming nerve cells, and regulating blood sugars.

But the truth is, I just like how sweet, cool, and heavy it is. 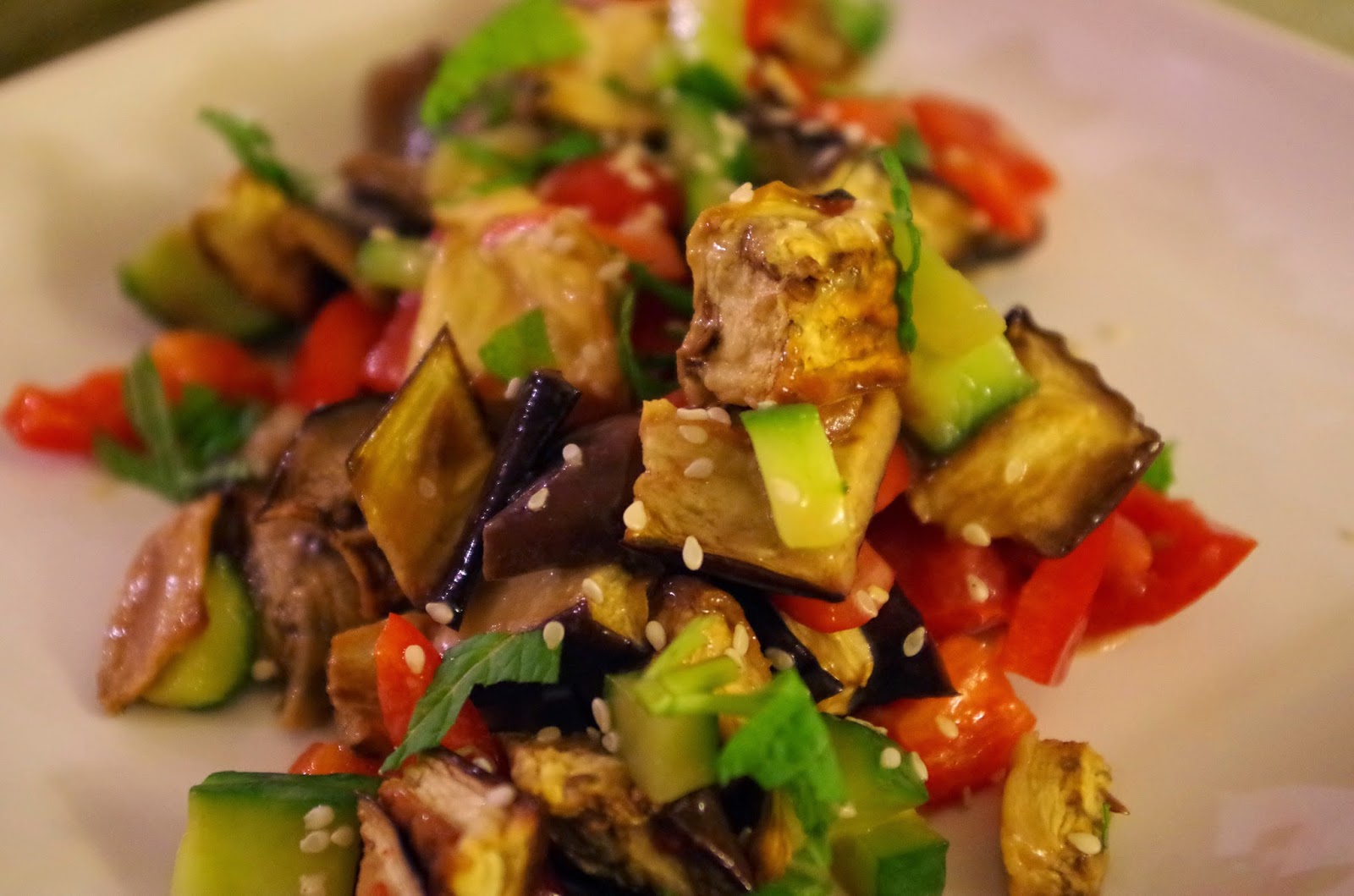 A few notes:  it turns out, I did not have enough peanut oil, so I mixed in some sesame oil (and added some sesame seeds to the top of the salad), and I really liked the mellow nuttiness of the peanut oil next to the load announcement of the sesame oil. Katzen also suggests peeling the eggplant, should you find yourself with a large globe eggplant rather than the smaller Japanese eggplants. Further, she recommends cherry tomatoes (I had regular ones) and an assortment of bell pepper colors. I went with red.

These are the kinds of crazy choices and substitutions a cook needs to make on a weeknight. Okay, okay, Katzen would approve--for her recipes are not fussy and neither should we be.

But let's face it, the star really is the coconut milk. All other notes are mere palaver. 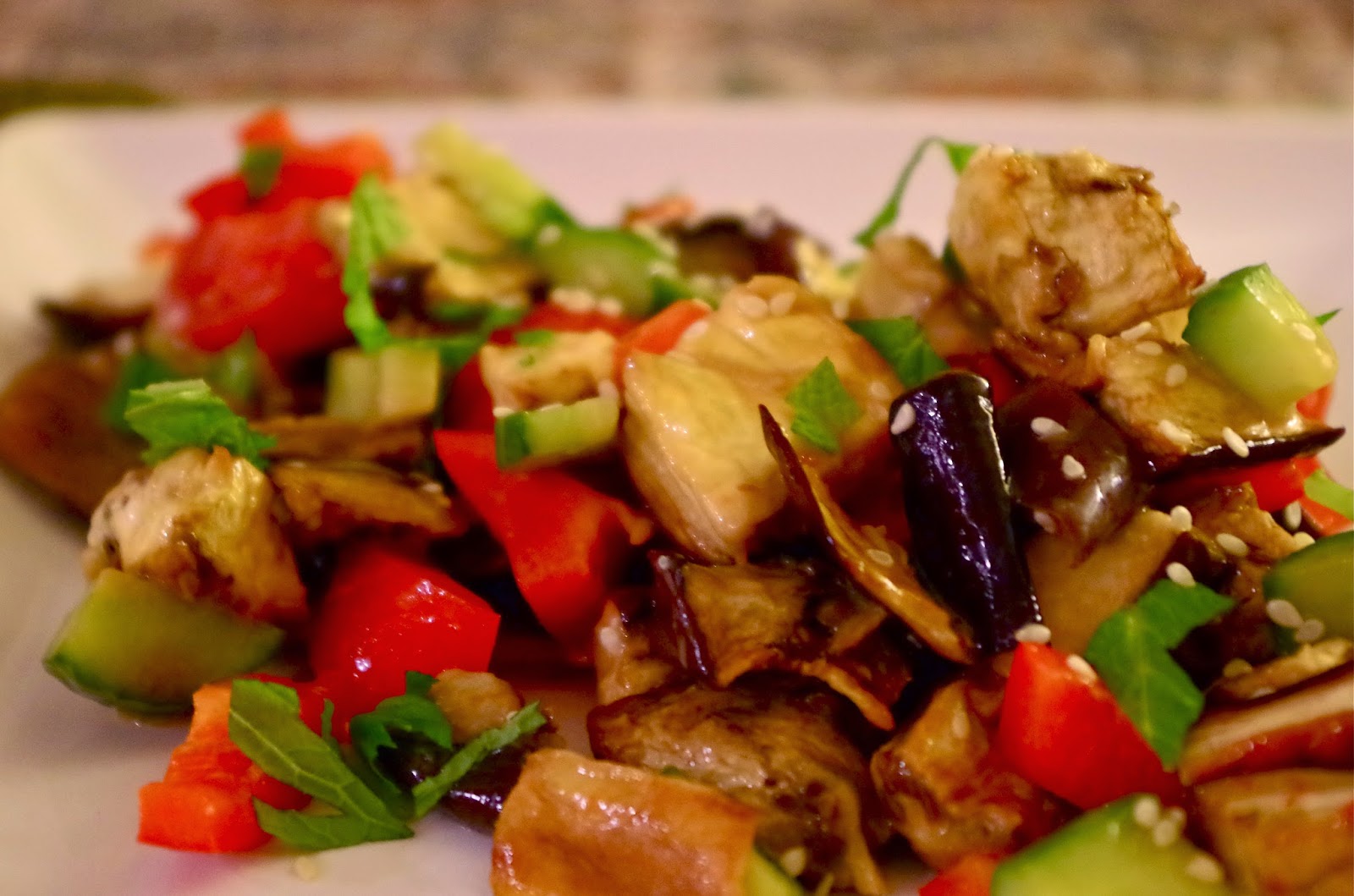 *Grapeseed oil will have the most neutral flavor.  I made this with a blend of peanut and sesame oil and it was delightful.

Instructions:
1. Preheat the oven to 400°F, with a rack in the center position. Line a baking sheet with parchment paper or foil and spray it with nonstick spray. Arrange the eggplant pieces on the baking sheet and roast for 15 minutes. Use tongs or a small metal spatula to loosen and turn the pieces, then roast for another 15 to 20 minutes, until the eggplant pieces are tender and somewhat shriveled.

2.  Make the vinaigrette while the eggplant is cooking:  Combine the lime through sweetener (agave, honey, or sugar) in a small bowl or a jar with a lid.  Whisk or shake until thoroughly blended.  Drizzle in the oil, whisking as you go or shaking halfway through, until it is fully incorporated.  Place ¼ cup of the vinaigrette in a shallow dish large enough to hold the eggplant.

3. Remove the baking sheet from the oven, sprinkle the eggplant lightly with salt, then transfer the still-hot eggplant directly to the vinaigrette in the dish. Let it sit and absorb as it cools to room temperature.

4. Stir in the cucumber, bell pepper, and tomatoes, along with another 2 tablespoons or so of the vinaigrette. Cover and refrigerate for at least 1 hour and up to 2 days. Serve cold or at cool room temperature, stirring the mint leaves in immediately before serving, and topping with a light sprinkling of peanuts or sesame seeds, if desired.