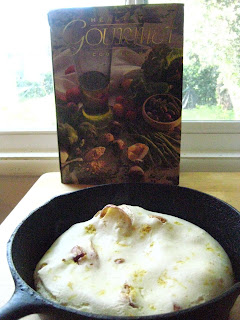 This cookbook does not have the most inspired or creative of titles, but it's still a pretty darned good cookbook.  Arranged by seasons and time of day (seriously, each season has a breakfast, dinner, and dessert section), the oversized book boasts that each recipe includes nutritional information, country of origin, and fantastic photographs. Tempted by most of the recipes, I can report that near to page 210 this winter, we also have Irish Brown Soda Bread, Smoked Chicken Hash, Sourdough French Toast with Poached Pear Sauce, and Butternut Squash Blintzes.  Yum.

While this cookbook does not come from that series of really big coffee table cookbooks in the mid-nineties, I always associate it with them.  I used to work in a bookstore while I was in graduate school, and I was assigned the travel and cooking section, which I loved because it was inspirational.  Against one wall, we had all those big cookbooks displayed (including this one), and I had flights of fancy about visiting all the featured countries: France, Italy (both of which I finally did get to visit) and Thailand (which still remains a fantastic notion only).  While ostensibly I was making money, I admit that most of my paycheck went right back into the store. I bought oodles of healthy or vegetarian cookbooks and tried to find my own cooking style.  Purchased probably around 1997, this cookbook expanded my own international cooking when at first I was somewhat tame:  it inspired me to eventually purchase cookbooks focusing on an individual cuisine. 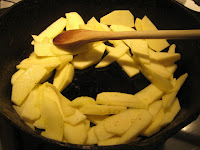 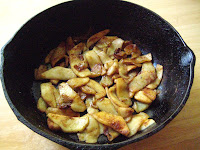 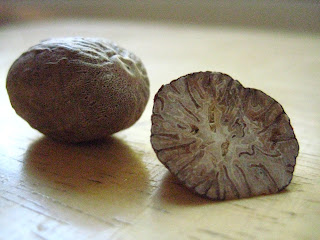 This particular recipe, which obviously hails from Germany, is a lovely one.  German pancakes are also called Dutch Babies, a name that comes from the German-American immigrants known as the Pennsylvania Dutch (dutch being an Americanization of deutsch).  My maternal grandfather, whose last name smacked of a German background, insisted that he hailed from the Netherlands because his family was Pennsylvania Dutch.  My mother would try to set him straight, but he wouldn't listen.  Nonetheless, like the pancake, this Dutch baby is clearly German and sides with her mother on the family origin debate.  Anyway, the pancake itself is an Americanized version of the apfelpfannkuchen (where the apples are on top), and when it first comes from the oven, it is a sight to behold.  Puffed up and important, it steams a little like a soufflé until the pancake settles down into something more breakfasty.  This Saturday morning, I ate it with warmed maple syrup, but the husband had just butter and a little lemon on it.  Either way, it was a light but satisfyingly filling breakfast.

Now we have to go work it off with a hike in the Berkeley hills. 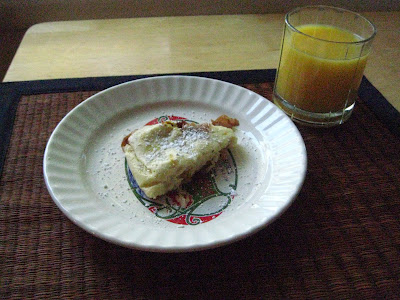 2.    Melt the butter in a 10-inch ovenproof skillet.  Add the apples and sauté until soft.  Sprinkle with the cinnamon and sugar.  Place in the oven to keep warm while you mix the batter.

4.    Remove the skillet from the oven, and pour the batter over the apple mixture.  Return to the oven and bake for 15 minutes.  Reduce the heat to 375 degrees and bake for 10 minutes longer.

5.    Remove from oven.  Dust with confectioners sugar, cut into wedges and serve at once.
Apples Healthy Gourmet Cookbook