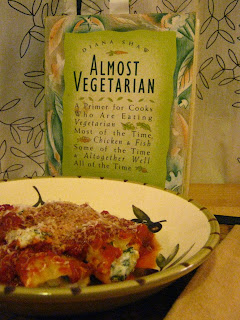 Pasta:  the ultimate comfort food, right?  Well, this was a week of failed pasta recipes from this cookbook.  I wanted these pasta dishes to work because I loved this cookbook back in the late 90s (lordy, this cookbook has been around for awhile).  So much so that pages 125 through 156 have broken away from the spine and now form a pull out pamphlet.  Full pages are stained from multiple makings of recipes and I have notes throughout the book: herald and celebrate the the eggplant pancakes (page 82), the cold sweet potato soup (61) (tastes like pumpkin pie but it's good for you!), the potato and leek soup (50) (with yogurt instead of cream!), tandoori-spiced chicken (177) (for all of us without a tandoor)!   However, given the week I just had with pages 120 and 206, I am just not sure I will open this cookbook for a while.

Page 210 is all about how to choose fresh fruit, particularly apples.  (Just so you know, the best apples have a natural sheen and are firm to the touch.)  So I went to page 120, and on Tuesday cooked what I found there--a quick creamy pasta that was grainy and underwhelming.  But then I reviewed my own rules for this blog:  if there is no recipe on page 210, I must choose the next closest recipe.  So page 206 it was, and I was happy to cook again.  Maybe this time the pasta would be better.  However, page 120 or page 206, I think I would have written the same thing.  Meh.  Almost Vegetarian?  Almost Pasta... 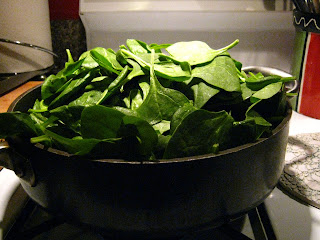 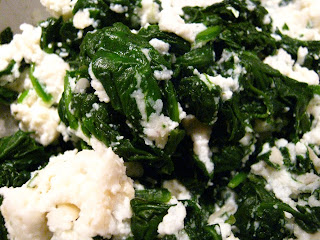 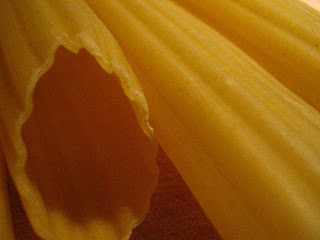 So page 206:  The recipe calls for cannelloni--a term that is often substituted for manicotti in the United States. Cannelloni are actually whole sheets of pasta that you roll into tube shapes. Manicotti are already prepared tubes.  Manicotti you can find in your everyday supermarket.  Cannelloni, not so much.  With the pasta bubbling in the stock pot, I made the sauce as directed.  This stuffed pasta recipe calls for Northern African spices (or at least in this combination) for a pretty standard Italian cheese filling.  Allspice, cumin and cinnamon over spinach, ricotta, and Parmesan?   Really?  After making the sauce, I sampled some, threw it down the sink, and subsequently opened a bottle of prepared pasta sauce (thank you, Muir Glen).  Then the dish was pretty good.  So if you want to try this number, skip steps 5 and 6, and use your own favorite pasta sauce (jarred or homemade).  It made us much happier. 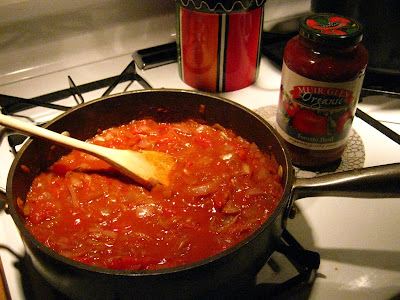 Next week, I have big plans for ushering in spring, even though the equinox and the time change happened last week.  Longer days.  Warmer weather.  Not so much need for comfort food.  Tomorrow morning, I am heading to the farmer's market for spinach and asparagus.  I am already looking forward to next week's cookbook... 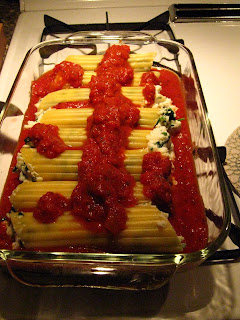 Instructions:
1.  For the filling: place the spinach in a deep saucepan and cover.  Place the saucepan over low heat, and steam until the spinach is soft and bright green, about 4 minutes.  Transfer spinach to a bowl, dry with paper towels and let cool.

2.  Stir together ricotta, Parmesan, nutmeg, and oregano in a large bowl until thoroughly combined.

3.  When the spinach is cool enough to handle, chop it roughly.  Add the spinach to the cheese mixture, stirring well to distribute it evenly.

5.  For the sauce:  heat olive oil in a large skillet and sauté the onions until soft and translucent, about 7 minutes. Stir in the cumin, cinnamon, and allspice, and continue to cook for 5 minutes.

6.  Add the wine, turn up the heat, and stir until the liquid evaporates.  Turn down the heat, add the tomatoes, and continue to cook, stirring occasionally, until the sauce has thickened, about 8 minutes.

7.  To complete the dish:  Stuff the manicotti with even portions of the spinach-ricotta mixture. Pour 1/2 the sauce on the bottom of a large baking dish.  Arrange the stuffed manicotti side by side over the sauce.  Pour the remainder of the sauce evenly over the tops of the manicotti. Sprinkle loosely with Parmesan cheese and cover loosely with foil.

8.  Bake for 15 minutes.  Remove the foil and bake until bubbly, about 5 minutes more.