Cookbook #19: The Best Soups in the World 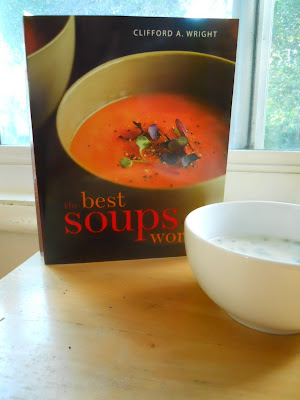 Adapted from Cookbook #19:  The Best Soups in the World

I love a cookbook with chutzpah.  Look at the title.  Not Soups of the World.  No, no.  This cookbook boasts the BEST Soups in the World.  Who am I to disagree?  Such cheekiness is welcoming, as I sometimes declare "Soup Week" for no discernible reason (this week, happens to be Soup Week, where we have had this Czech delight detailed here, but I also have a fresh American asparagus soup and a Colombian potato soup also on the docket).  I wish to make only the best soups.

This past Friday evening, I made bramborova lisovana polevka or, as everyone knows, "smooth potato soup" (okay, count me among the laity especially when it comes to the Czech language).

I share this crush with many of my generation who witnessed the Velvet Revolution from afar.  I, like many of my fellow American Gen X'ers, have been to Prague.  The first time was in 1995, just before Thanksgiving.  Two of my dear friends from high school (who were then living in Germany) and I drove in a snugly appointed compact car from Vilsek to Prague.  Along the way, we saw a "Castle for Sale" sign printed in big, block English that somehow bothered me more than I wanted it to.  Somewhere in the rural western Czech Republic with our mighty American dollars, we bought crystal at a roadside stand in part because we had to use the bathroom and it seemed the polite thing to do:  a fair exchange of money for crystal and much-needed facilities.

But then we got to Prague, all dark, dank, and almost Decemberish, and I fell in deep love with this city.  I loved the Charles Bridge, which we trundled across all bundled up in scarves, and I loved the Castle all lit up and sparkling above the river as the sun went down around 4 p.m.  And I even loved the pizza we ate in a turret submerged into the river even though the pizza had corn on it (this was back in the vegetarian days, and lordy, let me tell you being a vegetarian in recently opened Czech Republic was a sight to behold). 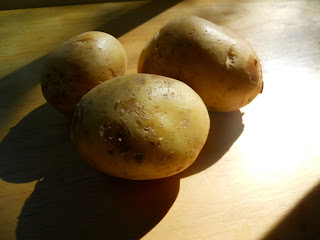 In 2003, the husband and I returned to Prague in what was possibly one of the worst weekends of our entire summer.  The heat hovered around 95 degrees, I had an unsightly and rather irritating heat rash on my calves,  the Rolling Stones were in town so Prague was filled with motorcycle-riding Germans and Belgians, and we stayed in a hostel so hostile the bathrooms reeked of Kafkaesque nightmares. I kept trying to convince the husband that Prague was wonderful, Romantic, with the capital "R."  And for a just moment I was able to convince him.  We wandered off the tourist path into a cobblestone courtyard all strewn with the remnants of the yellow blossoms of some tree, watched a family play cards in the twilight hours, and sipped Tokaji, a regional wine.  For two hours Prague was all that I had once imagined it to be.  And stupidly, we pleasure-seeking Americans left that enclave, in search of another experience.  When I think back on this second trip to Prague, I regret leaving our seats at this little, tucked away restaurant that I, if pressed, would never be able to find again.  But I hold this moment fondly, closely.

All of this has only the most tangential connection to this wonderful soup.  Thank you for affording me that indulgence to remember Prague. 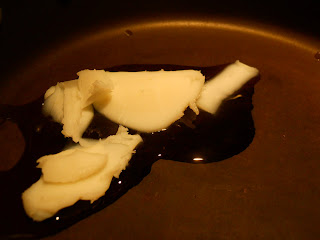 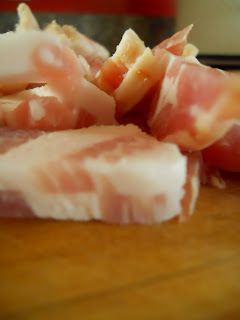 This soup looks rich--it really does.  Egg yolks, cream, potatoes, bacon, lard!  It boasts "filling" and "heavy."  However, it's a light, little soup.  Given that it has 5 cups of water to 1 cup of cream, the soup is actually a insubstantial bit of potato-y goodness.  I recommend serving it with a big ole green salad and skipping the fried bread.  Just have a good roll instead.  And while this will not bring anyone back to cobblestoned streets littered with yellow tree blossoms, it certainly does shed a positive light on the Czech Republic and its food. 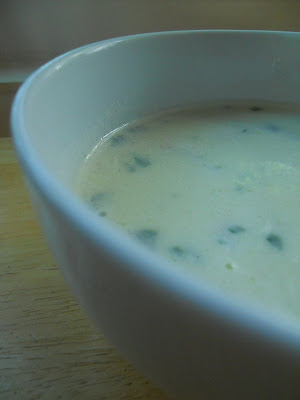 Instructions:
1. Place the potatoes in a pot with the water and 1 teaspoon of salt.  Bring to a boil over high heat, then reduce to medium heat and cook until tender, about 35 minutes.  Remove the potatoes without dumping the water, pass the potatoes through a food mill or sieve (or whip with an electric mixer until just blended).  Return to the potato water in the pot.

2.  Meanwhile, in a skillet, melt the lard over medium heat, then add the diced bacon and cook, stirring, until crispy, about 8 minutes.  Remove the bacon with a slotted spoon and set aside.  Fry the bread sliced in the skillet until golden on both sides, about 2 minutes in all.   Remove and set aside.

3.  In a small bowl, mix the cream and egg yolk, then stir into the soup and heat over low heat for a few minutes until the soup is very hot but not bubbling.  Add the remaining 2 teaspoons of salt, stir, then taste, and add more salt if necessary.  Add the bacon and parsley, stir, and serve with the slices of fried bread.
Bacon Best Soups in the World potatoes