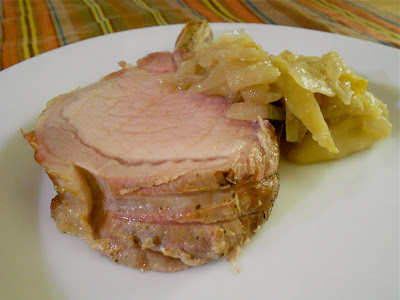 I promise.  This will come back to the pork.

The husband and I have been married for five years now.  In order to celebrate, we went to Point Reyes.  North Beach was foggy and all but empty, the point with the lighthouse was socked in, and the waves were tumbling loudly.  First we sat against the driftwood and listened, until the husband took a walk and I lay back in the sand to close my eyes and listen a little more carefully.  The sun came out for about two minutes and then the fog closed back in.  When the husband returned from his walk, I did handstands, my hands less stable on the shifting sand, and he had to hold me up.  When I was rightside up again, I felt giddy.  Ready to play.  And so we drove out to the lighthouse point where we clattered down to the lighthouse itself.  The fog horn sounded rhythmically.  And then we hiked the 300+ stairs back up to the road. 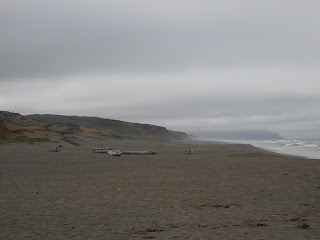 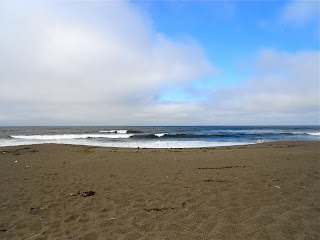 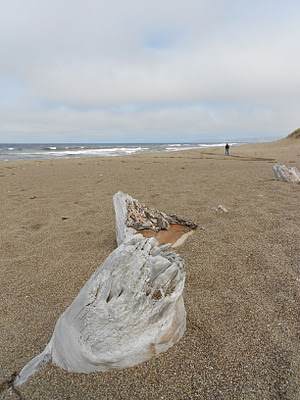 This felt perfect.  Like the ideal way to spend an anniversary.  Listening.  Carving a little space of our own.  Holding each other up.  Playing and feeling a little giddy.  Surrounding ourselves with beauty.  Willing to trundle the hard route back up.  Then we went to eat squid and hamburgers.  I got nothing in terms of the symbolic there--well maybe it was just good to sit and eat together. 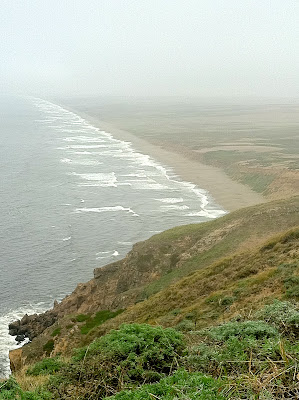 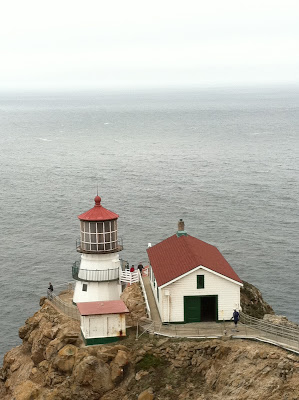 Speaking of sitting and eating together, very soon after our excursion to the beach, we ate this wonderful pork.  Alice Waters in her lovely cookbook Chez Panisse Fruit suggests much shorter times for making the marmalade.  I upped them below (she shaves off about 10-15 minutes) because my onions and apples were not "melting."  But melt they did after about an hour.  And oh, this marmalade.  It is worth the price of admission. 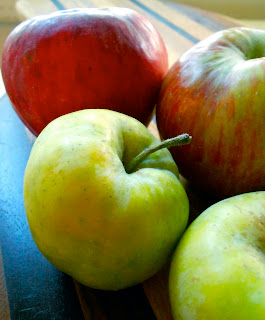 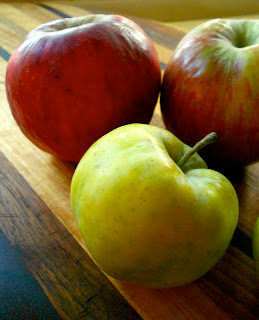 To make the onions and apples melt, you do need some verjus.  Verjus?!  You may be asking.  Here, learn about verjus, the unfermented juice of green grapes.  It is really light and fruity and tasty.  Here are a bunch of other verjus recipes, which you might need, seeing as the recipe below calls for only 1/2 cup and the verjus comes in large bottles. Verjus itself can be difficult to find.  We did a search at Berkeley Bowl and found none.   We then checked out Market Hall, where one can find two kinds of verjus.  You can also order it here. 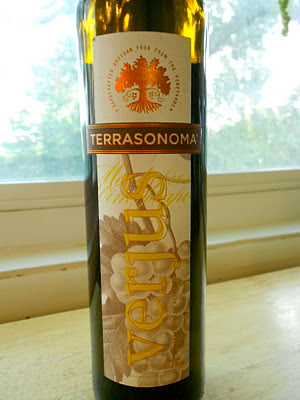 The pork itself is darned tasty.  Yes, it seems an expensive way to get pork chops, but we got a roast with seven chops for 28 dollars.  That's four dollars a chop.  And leftovers for a week.  While it does take a long time--about two, two and a half hours--most of the work is done long before the roast is.  It's also a pretty splashy, fancy dinner.  May I recommend it for your next one? 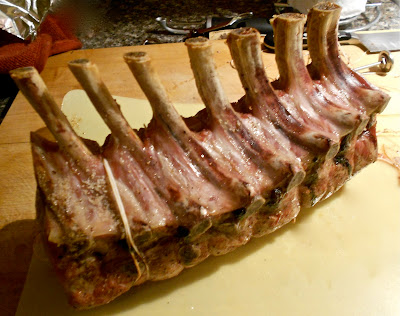 So I raise a pork chop to our fifth anniversary, where we spent time at the beach, immersing ourselves in the beauty of an edge of a continent, and then spent time at home, eating pork and loving it.  I cannot think of a better way, or a better person with whom, to spend this three-day weekend. 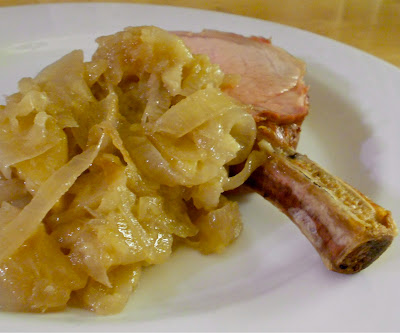 One Year Ago: Stuffed Beef Tenderloin with Whole-Wheat Couscous and Black Olive Vinaigrette

Instructions:
1.  To make the marmalade, first peel and slice the onions and put them into a heavy-bottomed pan with the verjus, wine, and a big pinch of salt. Bring to a boil, reduce the heat, and simmer until the liquid has been absorbed, about 30 minutes.

2.  Meanwhile, peel, core and slice the apples. Add the apples and water to the onions and cook for another 30-45 minutes or until the onions and apples are soft and melted together.  Stir occasionally to ensure the marmalade does not stick. Stir in the butter and honey. [Okay, seriously, if you want to watch the calories, you could leave out the butter and honey because the onions, apples, and grape juices are pretty darned tasty without them, but I went for authenticity, and I stirred them in.  Pretty darned good.]

3.  Season the pork loin generously with salt and pepper. Tie the roast securely between each rib bone with cotton twine to help ensure even roasting.  Refrigerate for a few hours or overnight.  Take the roast out of the refrigerator 1 hour before roasting.  Preheat the oven to 375 degrees.

4.  Roast the pork in the oven for about 1 1/2 hours, until the internal temperature registers 135 degrees.  Remove the pork from the oven, cover loosely with foil, and let rest in a warm place for 20 minutes before carving (the internal temperature should raise to 140 degrees).  [Alice has a whole suggestion for you to put this hunk of meat on a spit.  I do not have a spit.  I roasted it.]

5.   To serve, remove the strings and cut crosswise between the ribs carving the roast into chops.  Serve each chop with warm marmalade.