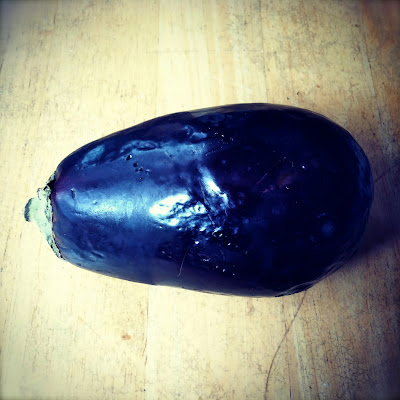 People generally are not fence sitters when it comes to eggplant, which is a good thing.  I like a group that isn't shy about its opinions, so it seems only fitting that eggplant be served at book club, where opinions run rampant.

Some people do not like eggplant because it is bitter or because its texture is (some say) slimy or mushy or because it has a tendency to take on the flavors of the ingredients around it rather than stand bold on its own.  I am not those people.  I have always liked eggplant.  I like its hint of bitterness, its silken texture, and its willingness to sit back and not always be the star.  Fry it, bake it, grill it, lather it in olive oil or tomato sauce or just plain serve it with salt, I say, bring on the eggplant.  But this recipe for baba ghanoush (or how Claudia Roden spells it--baba ghanouj--but don't worry there are as many ways to spell it as there are to make it) is, let's face it, a gateway recipe for those of you who are not fans. 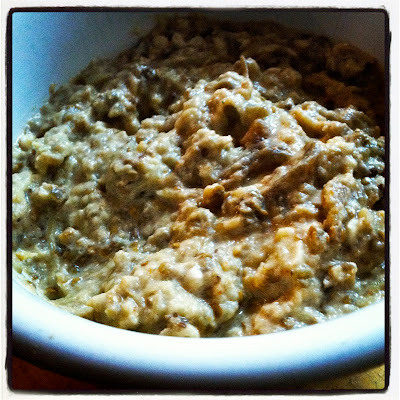 So last night, in the midst of a rather impressive thunderstorm--which we don't get here on the West Coast all that often (thank you climate change?)--a group of six of us gathered round a spread of delicious food to discuss Margaret Atwood's Oryx and Crake.  People had as many opinions about Oryx and Crake as people often do about eggplant; sadly, I had not reread the book* since my original reading in 2009, so I was woefully underprepared.  While most found the book to be predictable and not very futuristic, I remember finding it a clever comment on the present--so much so, I bought the parallel novel, The Year of the Flood, when it first came out and took five students to hear Atwood read when she was on her book tour in San Francisco.

*In my defense, I am knee deep in reading Love in the Time of Cholera.


So while I was not necessarily able to extol the virtues of Atwood, we did all eat and eat well, including the wonderful little bit of eggplant.  And most delightfully, people had opinions, lots of them, which I always love.

1.   Preheat a broiler or an oven to 400 degrees. Prick the eggplant skin with a fork to allow steam to escape while cooking and so the eggplant doesn't explode (which sounds more exciting than it is).  (Even better, grill the eggplant outdoors on a grill to get maximum smoky flavor.  But hey, you do what you have to do in a rainstorm).

3.  Peel the eggplant and scoop the flesh.  Put the eggplant flesh in a colander and evenly sprinkle a teaspoon or two of salt over it and let the eggplant drain awhile. (This helps reduce the bitterness for those of you who are not lovers of eggplant).

4.  Mash the eggplants with a fork until creamy  (I generally use a pastry cutter.  Does the trick faster--although it does leave the baba ghanoush chunkier). Add the finely minced garlic, tahini, and lemon juice slowly while mixing. Season with salt and add the ground cumin. Taste and adjust the seasoning as necessary.  (Seriously, you might want a lot more garlic or less tahini or more lemon.  Baba ghanoush is one of those dishes that should be a little different each time you make it.)

5.  Serve (best at room temperature) with a drizzle of olive oil and a sprinkling of parsley.
Eggplant Garlic Tahini The New Book of Middle Eastern Food