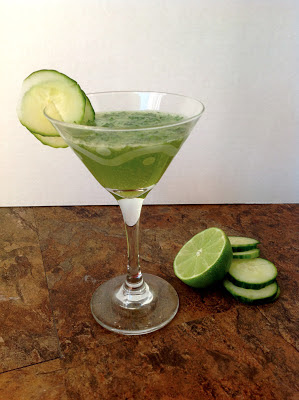 Cucumbers are delightful.  In fact, I seem to be a fan of cucumbered alcoholic drinks, as evidenced here.  And this little refresher comes just at the right time because, baby, it's hot outside. 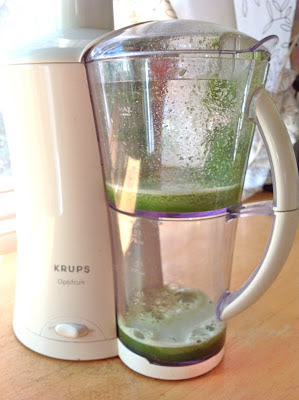 This drink is relatively easy, given that my mother once insisted to me that I had insisted to her that I wanted a juicer.  I have no recollection of having ever wanted said juicer, but I am glad that she gifted it to me nonetheless.  Then, to boot, my cousin once insisted I needed martini glasses; I was young, I insisted that I didn't like martinis.  I looked at her aghast.  She returned the look.  Then she kindly gifted me that which I did not know I needed.  But now I am glad I have them, too. 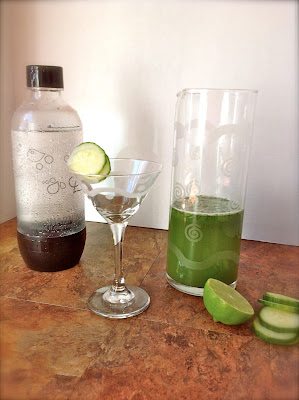 So as I mentioned, I have been away for a week (and have been nursing a hell of a cold for two and a half weeks and counting) at Stanford studying the Great Depression and World War II as part of the Gilder Lehrman Institute.  I got a good deal out of the program, even though I am no history teacher, and am so glad I went. 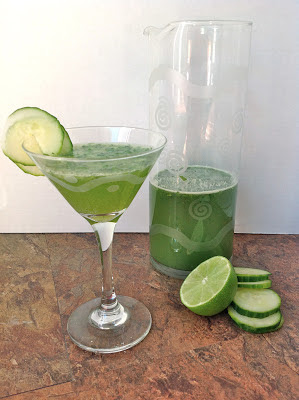 I have to say one of the best days of all was when we got to prowl around in the special collections, and we got to see some of Steinbeck's papers.  I wasn't much of a Steinbeck fan until about two years ago when I got to go to, what I affectionately refer to as, Steinbeck Camp (see here and here) (however, the NEH would prefer I refer to it as an National Endowment for Humanities Institute); there, I finally understood what all the fuss over California's Golden Boy was about.  Thus, it was great fun to paw through some of Steinbeck's lesser articles and poems, including his "Primer on the 1930s" complete with cross outs, circles, and rewritten passages.

Outside of Special Collections, I took a lot of notes, revisited some macroeconomics, got to peek in the Hoover Institute's archives (they have some weird stuff--not limited to Hitler's skull x-rays, emergency ration kits, and the first known mentioning of the New Deal by FDR on a yellow legal pad), and got to feel a little like I was back in college (those three-hour lectures make fast reminders of what it's like to be 19 again).  Bonus: I also met some lovely people. 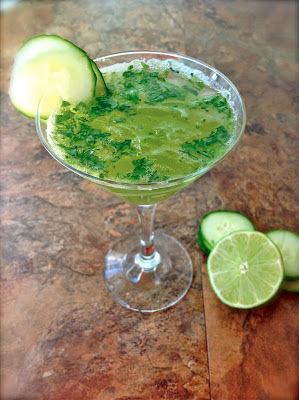 Nonetheless, it is nice to be home.  Nice to be able sit in my own backyard. Soon, my father is coming to visit, thereafter I depart for the land of humidity, and then my niece returns for a two-week visit.  Summer is full on here.  The only thing to do is embrace it, kick back with a cucumber drink, and be grateful that someone somewhere insisted I needed a juicer and a set of martini glasses.  Good people.

Ingredients:
1 cucumber
2 tablespoons tarragon leaves (although mint or basil or a combination would be grand)
Juice of 1 1/2 large limes
3/4 cup vodka
1/4 cup agave nectar
Crushed ice for serving (throw some ice cubes in a plastic bag and take a hammer to them)
1 cup sparkling water

1. Cut 8 thin rounds of cucumbers and set aside for serving.

2.  If you have a juicer, juice the cucumber.  If not, coarsely chop the cucumber and then it in a food processor to puree for 1 minute.  Pour into a fine-mesh sieve set over a bowl and press to release as much juice as possible.  You should get about a scant cup of cucumber juice.

5.  Serve (I used a martini glass, but an old-fashioned glass works as well) with crushed ice and topped with sparkling water.  Garnish with reserved cucumbers.
Cucumber Lime The Sprouted Kitchen