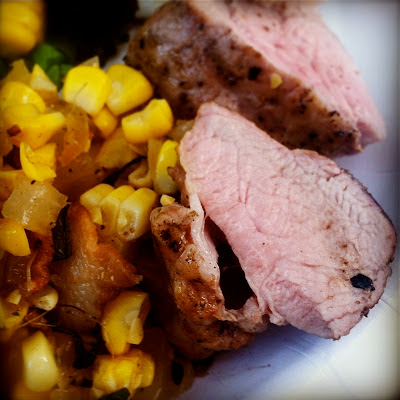 For the Fourth of July, my dad came to visit with his wife, my aunt and my uncle.  After going to the Coliseum to watch the A's (and the Cubs, and I cheered on the losing Cubs, as is usual), they all came over to our place for a backyard barbecue of pork tenderloin, potato salad, and a tossed salad.  It was quite pleasant, sitting in the backyard hearing stories of their growing up. 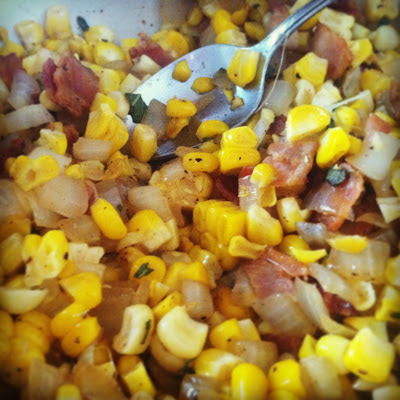 As the husband tended the pork on the grill, my uncle and my dad told stories of my grandfather who commanded performances of delight and surprise for the home movies as his children came down the stairs at Christmas.  Should my father not seem delighted or surprised enough, my grandfather would send him back up the stairs to recreate the moment.  To be honest, my father insisted on a full family portrait on the stairs of his suburban home when my brother, sister, and I were young.  The apple did not fall far from that tree.  I do not make the cats pose on Christmas.  It's my gift to them.

For a while I had to duck inside the build the tossed the salad.  My aunt came with me and we chatted about my cousin and her children and the renovations on their home.  We carried the salad outside to find my uncle telling the story of a St. Louis syndicate coming to the doughnut shop (which was part of my great-grandfather's and grandfather's pharmacy) in the wee hours of the morning;  my uncle, not knowing who they were and thinking they were just the police officers he would often let in, opened the locked door to them.  Unaware, my uncle went back to making doughnuts.  My grandfather looked at his son askance, but waited on these men, clad in black suits in the middle of the night asking for doughnuts and coffee; they left behind five hundred dollars in tips.  My uncle says he got to pocket none of the tip money.

The husband carved the pork into rounds, and my dad and my uncle told the story my great-great grandfather who died in the Great Chatsworth train wreck in 1887 (and my dad still has my great-great grandfather's watch, which stopped at the moment of the wreck).  As we sat down to eat, my uncle spoke of my grandfather driving with him to his second job interview in downtown Chicago and of their sitting with my grandfather's father-in-law to have sandwiches to pass the time.  It was lovely to hear them reminiscing about their Cape Cod-style house and their father who never showed any pain to his children, even up to the days before he died at only 53. 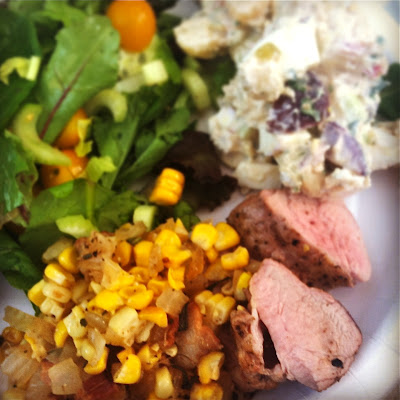 So, there it was, a July afternoon barbecue after a baseball game with my family.

We had this pork tenderloin, which was quite wonderful (and super easy), with the excellent corn relish.  The corn relish has sage and maple syrup to give you that sweet, savory taste that is so lovely against grilled meat.  The next night, the husband and I used the leftover pork and relish to make tacos with guacamole and queso fresco.  We still have leftovers, and I think these simple tacos may be making an appearance as today's lunch as well.  I highly recommend this simple dish.  And if possible, eat it while you tell stories of growing up.

Finally, I have to share with you my favorite quotation as of late from Gary Shteyngart's Super Sad True Love Story, the best book I have read thus far this summer:

I hate the Fourth of July. The early middle age of summer. Everything is alive and kicking for now, but the eventual decline into fall has already set itself in motion. Some of the lesser shrubs and bushes, seared by the heat, are starting to resemble a bad peroxide job. The heat reaches a blazing peak, but summer is lying to itself, burning out like some alcoholic genius. And you start to wonder - what have I done with June?

Indeed, what have I done with June?  It always surprises me to be this far into summer already.

1.  Cook the corn in boiling water for 4 minutes. Remove it and allow to cool to room temperature.  Once cool, with a sharp knife, remove the kernels from the cob.


3.  In a saute pan cook the bacon over medium heat until crisp. about 5 minutes. Add the onion and cook an additional 4 to 5 minutes, or until the onion is clear. Add the corn and cook 2 minutes more.  Remove the corn mixture from the heat, add the sage, and season to taste with salt and pepper. Stir well and set aside.

4.  Remove the tenderloins from the grill, allow them to stand for 5 minutes, then carve each in 1/2-inch slices. Spoon some relish over each portion of the sliced pork and serve.
Bacon Corn Maple Syrup Onion Pork Sage The Thrill of the Grill