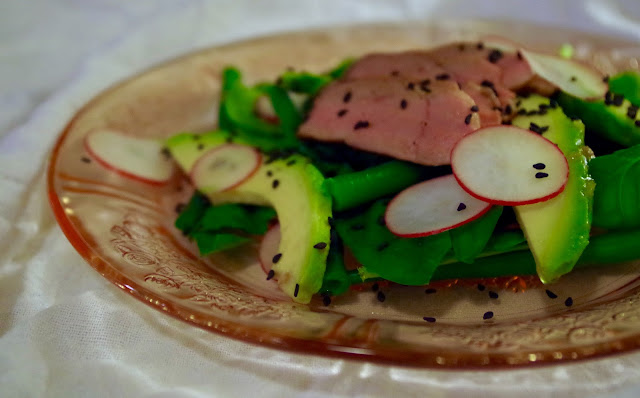 What a strange week this has already been.  On Monday night around 2 am, we felt a jolt to the whole house. Ever my father's daughter, I went downstairs in the dark to grab my iPad to figure out just how strong that short but solid temblor was. I checked earthquaketrack and usgs. Neither showed our quake. I kept refreshing the webpages, but still nothing. First I convinced myself that it must have been a minor earthquake, like a 1.0 or 2.0 and the epicenter just so happened to be under our house. Then I convinced myself that I had dreamed it (hey, by then it was 3 am), but I was certain that the husband, who had fallen back to sleep, had felt it too. Confused, I fell back to sleep. 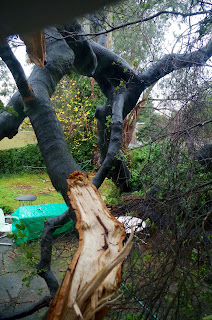 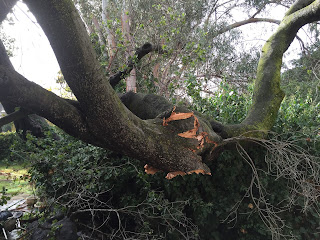 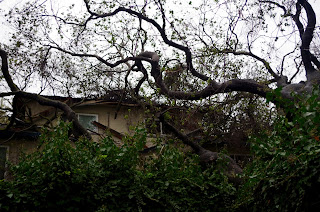 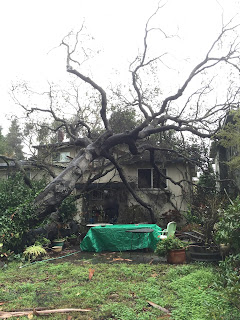 So I guess they aren't kidding when they say that earthquakes feel like a truck hitting your house.  Or a tree, in this case. Thankfully, no one was hurt (although a branch did go crashing through the neighbor's window, which could have been bad, but it wasn't). The only casualties are small parts of the roof and the husband's grill.

None of this has anything to do with the wonderful recipe I am about to share with you. Nothing at all. But this was the view we had when we sat down to dinner last night (we're still working with our landlord on getting the tree removed). 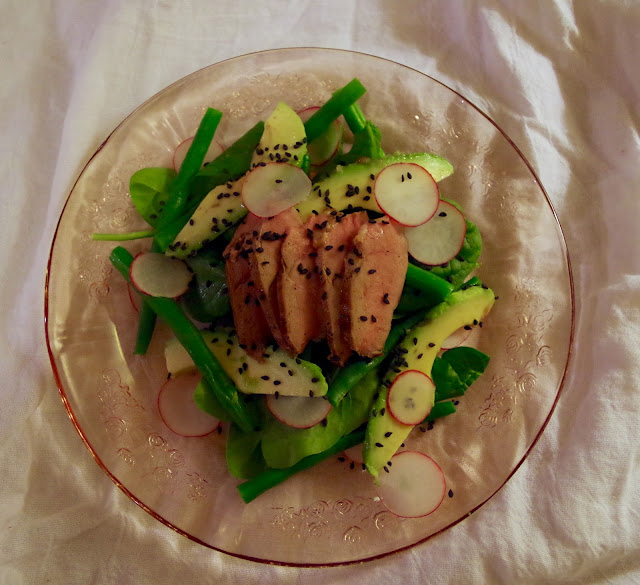 This delicious salad comes from Diana Henry, whose praises I have sung here. She's a veritable celebrity in the UK but remains relatively unknown stateside. I want to change that. Because, lordy, lordy, do I love her cooking. In a gorgeous interview she talks about moving to healthier cooking (I don't want to get ahead of myself, for I have plenty of indulging to do this week, but we both know we're going to need that sort of cooking in the new year). She prioritizes taste but ensures that it's always good for you. 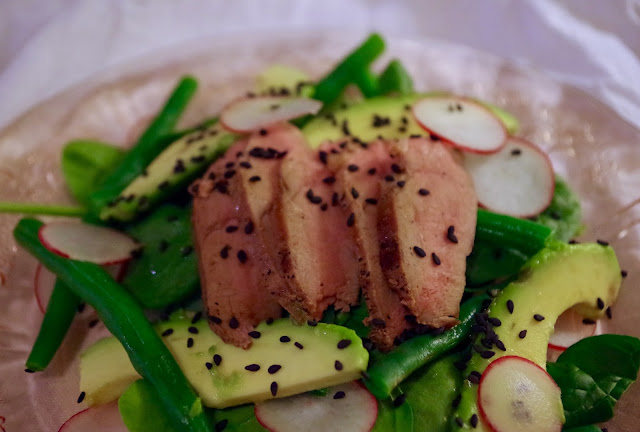 In this cookbook,  A Change of Appetite, Henry turns to Scandinavian, Japanese, and Italian cooking (among many others) for inspiration. Clearly, this beautiful salad uses Japanese ingredients to coax a mixture of surprising and satisfying flavors from one little duck breast. 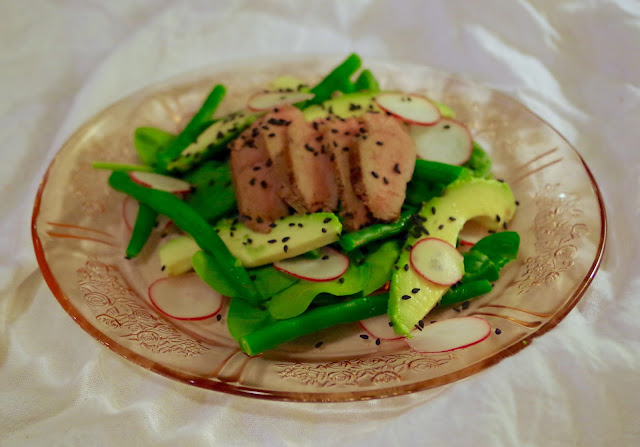 The recipe does have three specialty ingredients, only one of which is essential I would argue. Don't substitute anything for the pickled plums (umeboshi). Their sharp, salty flavor is hard to replicate. However, if you cannot find any at your local grocer, amazon comes to the rescue. You can find it in paste or full plum form. I used four whole plums and ground them with a mortar and pestle to produce two teaspoons.

The preserved ginger seems to be a rather British ingredient. Or at least it seems to be more readily available in the UK. Again, amazon can gallantly swoop in with this product. However, my grocery had this one, which I just chopped up about 1 tablespoon of ginger. I imagine you could easily use fresh ginger as well. 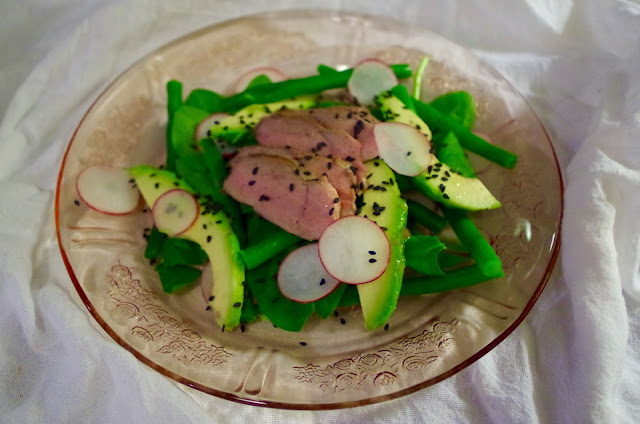 Finally, the duck. The duck was perfection, in part because it gave a little more fat (even with the skin removed), to a light dish. Further, it elevated a rather simple dish to something special. But you could use a chicken breast if that's what you have on hand. The duck, however, can stand up to a rather aggressive dressing--what with all that fermentation and sweetness in the plums and ginger. Chicken would probably be a little overwhelmed by it. I liked the dressing so much, though, that we made another batch just for regular salads this week.

And with that, the husband and I ate a beautiful pink and green salad while overlooking a downed tree in our backyard. Seemed strange to me. 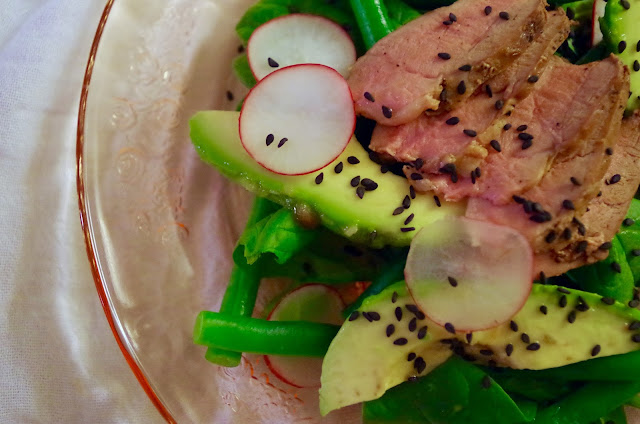 Adapted from  Diana Henry's A Change of Appetite

Instructions:
1.  Preheat the oven to 425 degrees.

2.  To make the dressing: Whisk all of the dressing ingredients together. Don't be concerned that the pickled plum paste won't completely blend; there will still be pale pink pieces in the dressing. Taste for a balance of sweet and tart adjusting the sugar, vinegar, and plum paste accordingly.

3.  To make the salad: Halve, pit and slice the avocados. Peel each slice, and immediately season and toss with some of the dressing (to prevent browning). Wash the radishes, trim and slice as thinly as possible.

4.  Season the duck breasts. Heat the oil in a skillet and brown the duck breasts on both sides, then put them in a roasting pan and cook in the hot oven for 5 minutes.  (To determine if the breast is done, check the center of the breast; it should be pink, like rare steak.) Remove the duck breasts, cover with aluminum foil, and let rest for 3-4 minutes.

5. While the duck is roasting or resting, steam or boil the green beans until crisp-tender (about 1-2 minutes), then immediately submerge in ice water to stop the cooking process.

6.  Slice the duck breasts, then combine with all the other ingredients, except the sesame seeds, and toss with the dressing.  Arrange on a large plate or divide among four plates. Sprinkle the sesame seeds on top and serve immediately.
A Change of Appetite Avocados Duck Ginger Green Beans Mirin Pickled Plum Paste Radishes Spinach Sugar