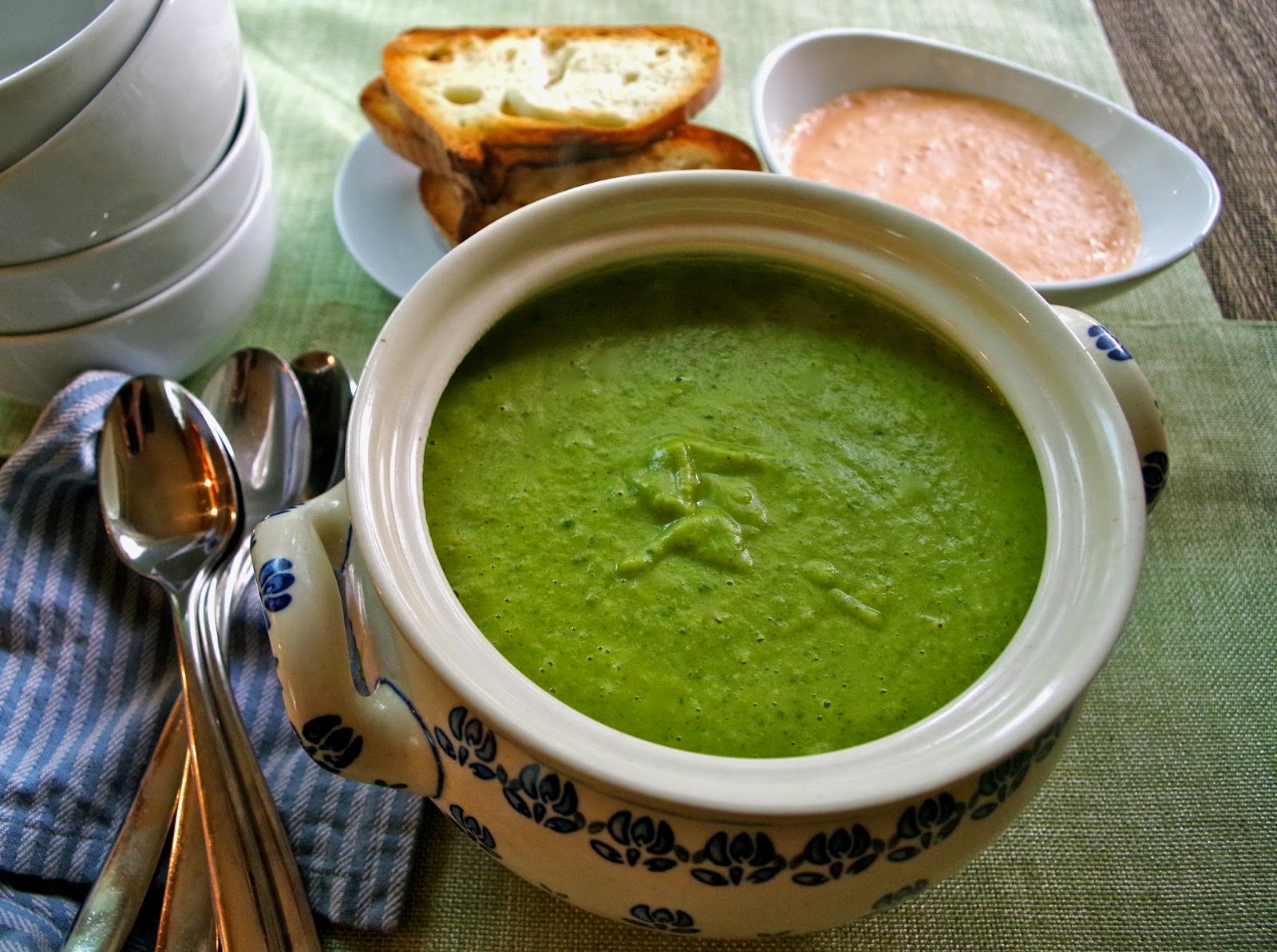 I have long celebrated the culinary chops of Yotom Ottolenghi on this here website, and Ottolenghi has gotten oodles of international attention for his amazing cookbook Plenty (which I'll admit I have crowed about time and again on this website). However, fellow British chef Diana Henry has her own cookbook Plenty that can stand sentinel on its own. I am delighted to crow about her as well.

Certainly, in England, Henry is well known and well beloved; however, stateside, she doesn't (yet) seem to have the same following. Which is a shame, for her cooking is downright pleasurable in that wonderfully, simply satisfying way. 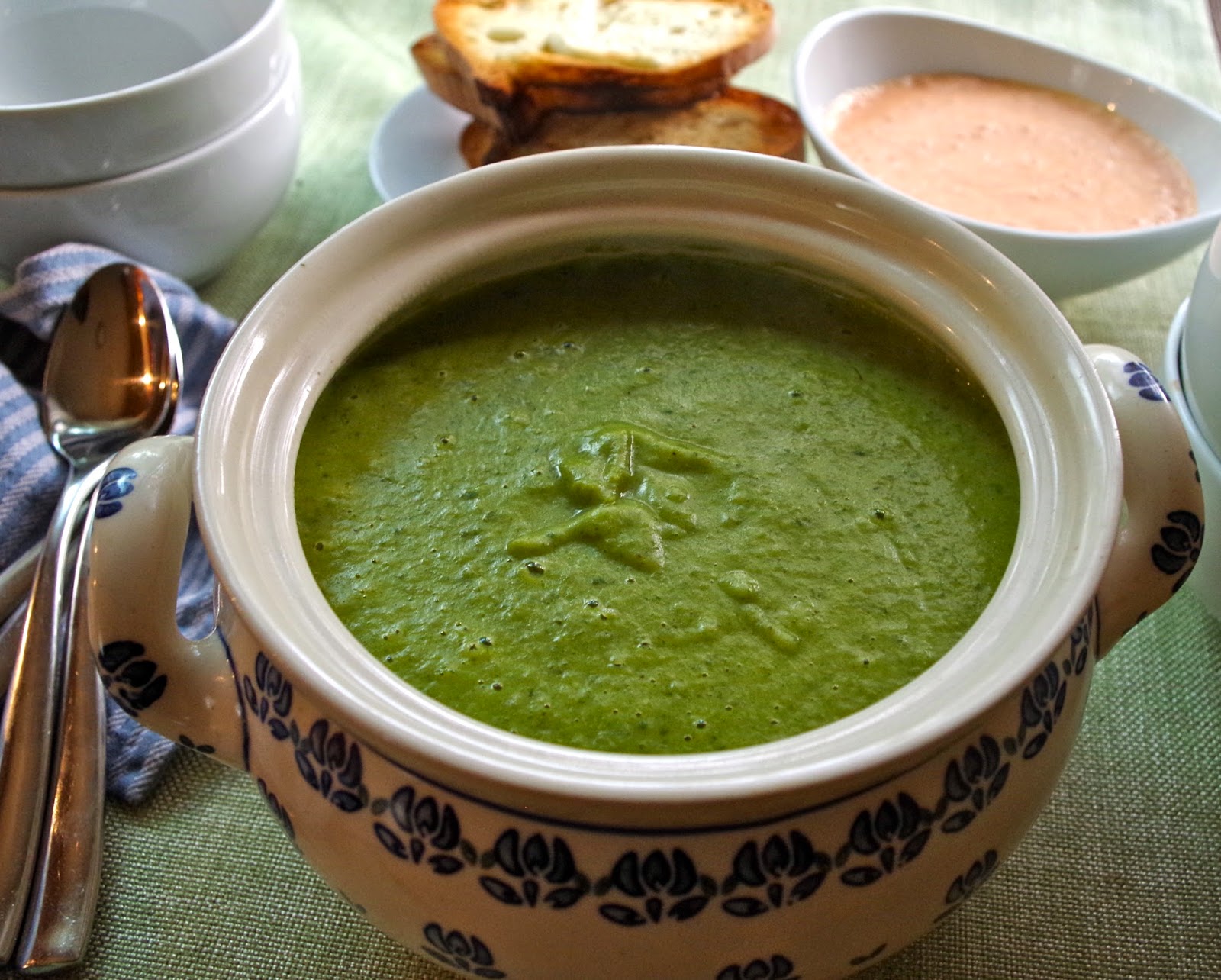 Diana Henry, who originally hails from Northern Ireland, is a transplant to London, where she writes for The Telegraph and maintains her own luscious website. Additionally, she has penned eight cookbooks (!) and has a brand spanking new one out that I am dying for someone to drop into my hands at just the right moment.

This particular cookbook (Plenty) came out in 2010, and it shares the same spirit as one of my favorite pieces of food writing ever, The Everlasting Meal. Committed to ensuring we know where our food comes from and how it is produced, this cookbook encourages us to use better food, but not necessarily more expensive food. In other words, how to get the best use and full use out of all of our food in a wholesome and sustainable way. I can get right behind that!

Further, Henry encourages that we should use all of the food that we purchase, using bones for stocks and leftovers for a meal transformation (in fact, she has a whole chapter devoted to Les restes) and cooking larger quantities on the weekends (whenever that may fall for you) so that we have easy, healthy, high-quality food to reach for rather than convenient, often bad-for-us food when we grow so stressed we cannot cook. 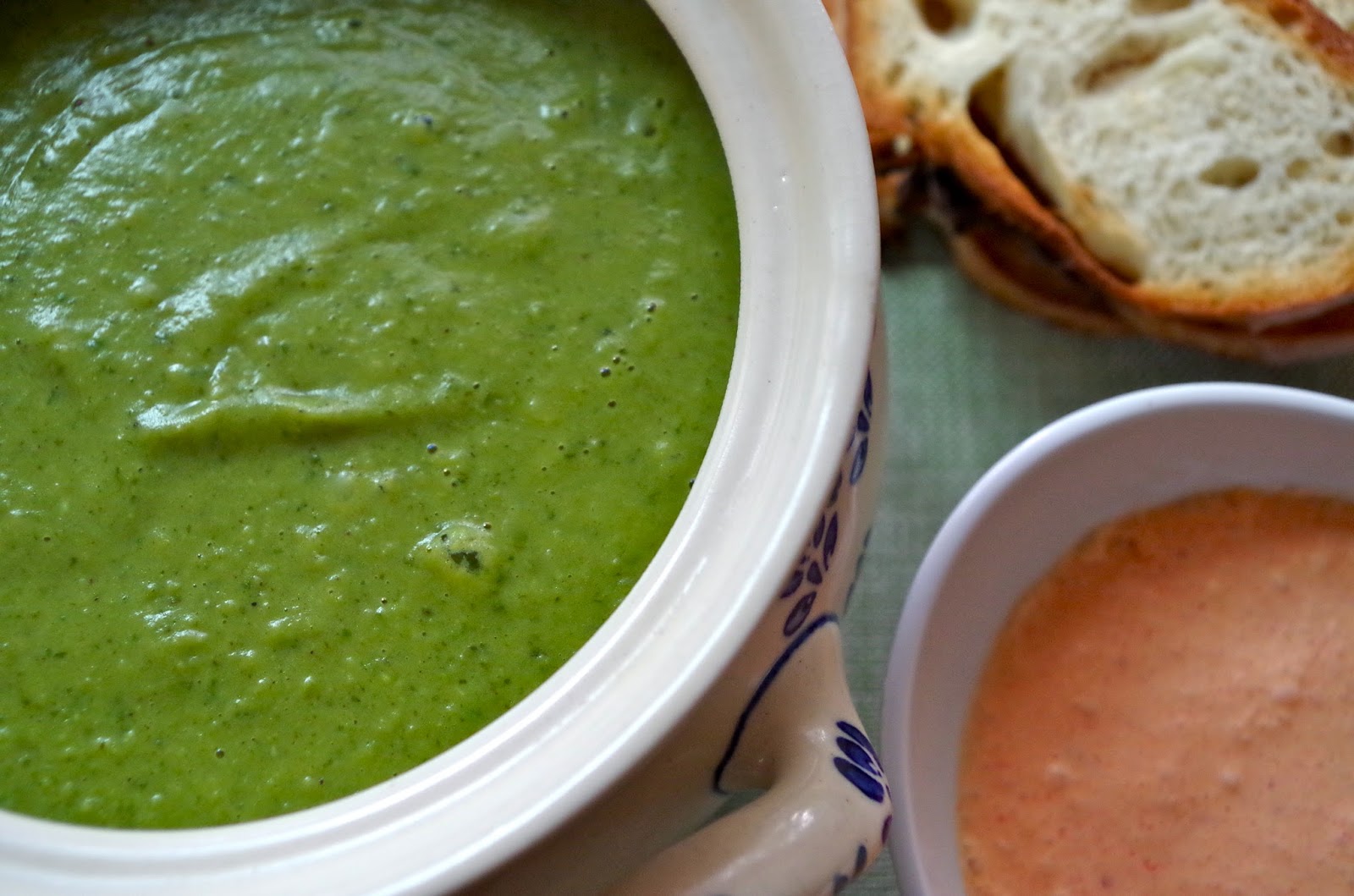 This recipe is Henry's take on that English staple, Pea Soup. The British take their pea soup--split or spring--seriously, and I delighted in reading this lovely article from The Guardian on pea soup.  However, this is not the split pea soup of foggy London fame; instead, this spring soup boasts a bright green hue that smacks of warming days and fruiting trees. However, Henry uses frozen peas, in part so we can stave off that heady and oft-too-early anticipation of the abundance of those beautiful English spring peas but also so that it becomes one of those easy meals you can make any day of the week and practically any day of the year. 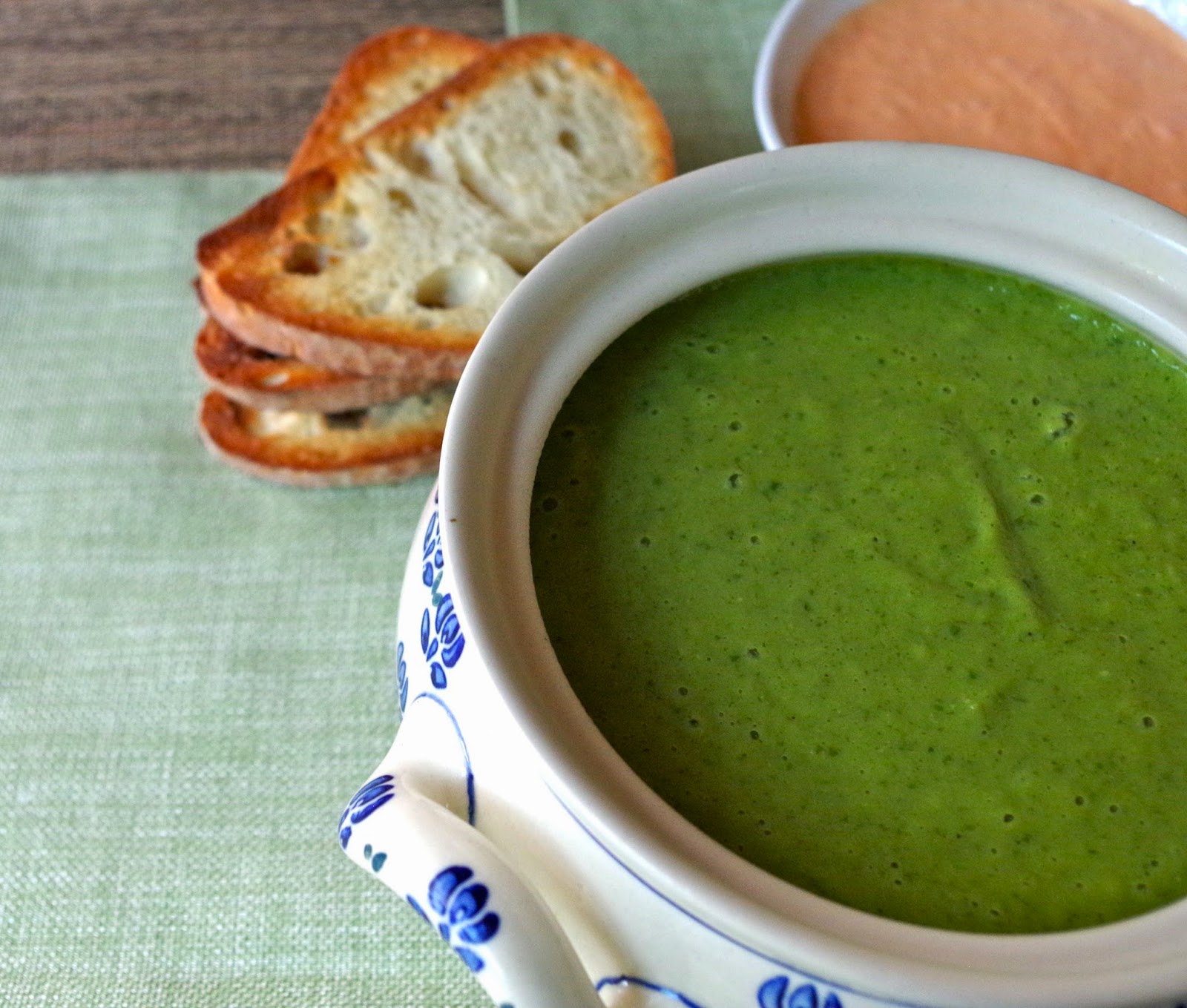 The kicker for this soup is twofold: both the addition of the bright cilantro (which if you find soapy, you could easy leave out of this soup) and the red chile cream. The cream not only adds a little heat, but it is such a pretty color contrast to the soup. Further, the use of potatoes makes this soup heavy enough for a full meal (but the absence of meat makes it light enough for a springtime supper). 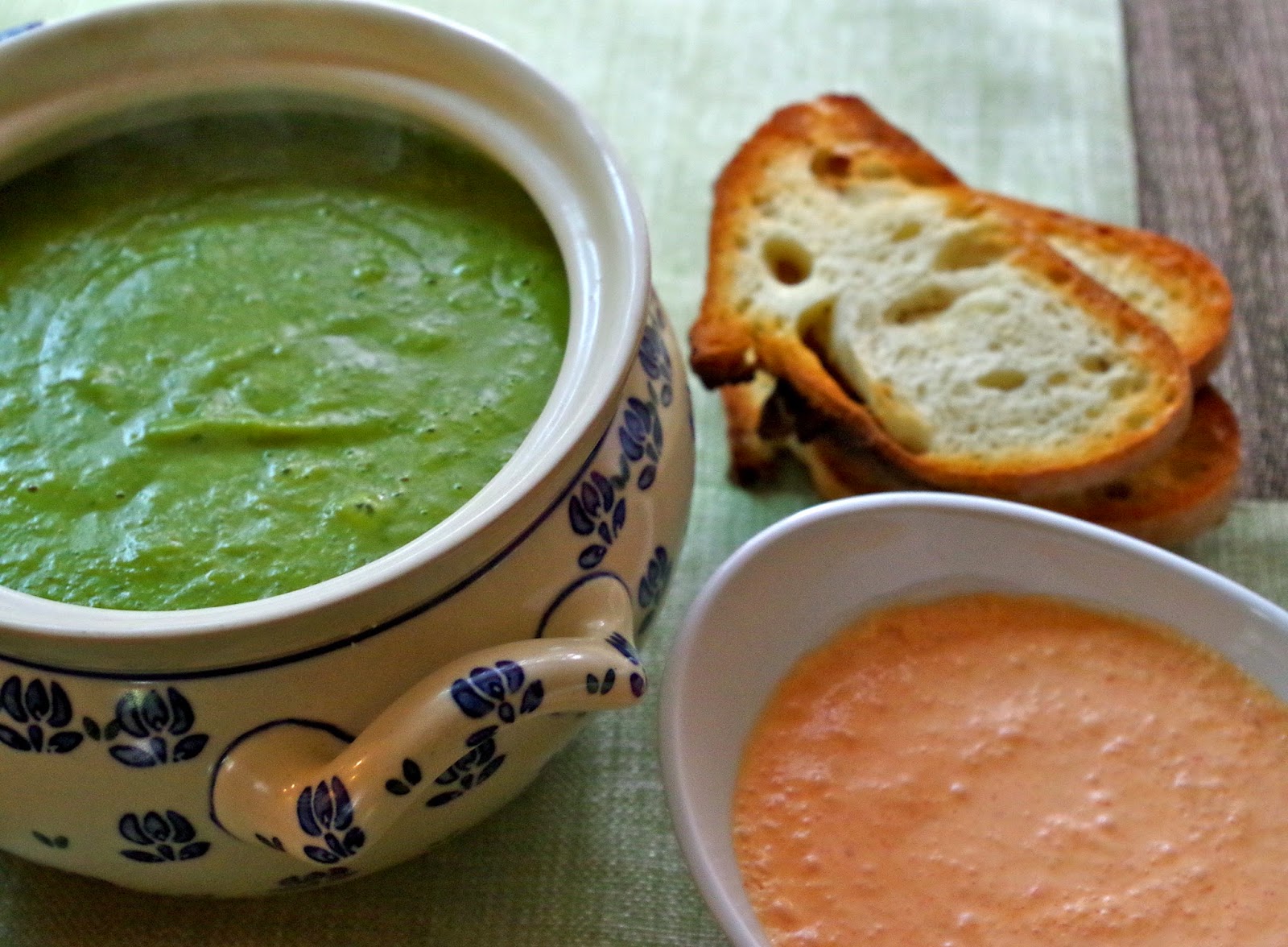 I am delighted as all get out to have two Diana Henry cookbooks in my library (a duck salad from her cookbook A Change of Appetite will be making an appearance on this blog in the future). It's wonderful to welcome Henry to my kitchen, for her recipes have not failed me (and I have been doing my best to cook a variety of her dishes).

For now, it's time to settle in for a bowlful of quite simply a plentiful, simple, and relatively quick bowl of pea soup. What springtime joy. 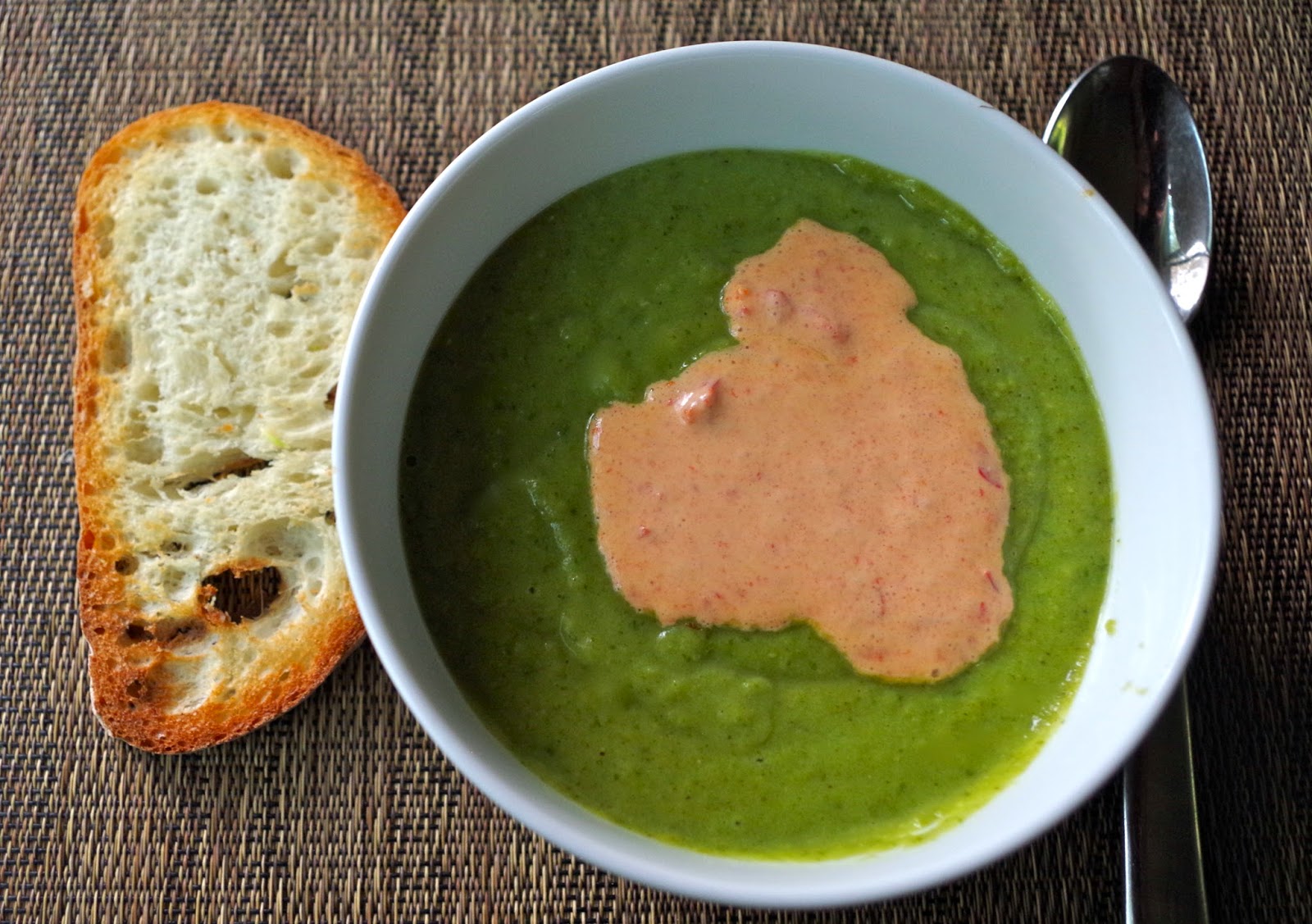 Instructions:
1.  Heat the oil in a heavy pan. Add the onion and potato and stir. Add the cumin and stir for a minute to release the aroma. Chop the cilantro stems (reserve the leaves to add to the peas) and add them, stir, add a splash of water, and cover. Sweat for about 20 minutes, adding a bit of water from time to time to prevent the mixture from sticking on the bottom of the pan.

2. Add the peas, stock, cilantro leaves, and seasonings, and bring to a boil. Simmer for 3 minutes, then leave to cool. When at room temperature, puree in a blender or food processor, and add lemon juice to taste.

3.  To make the cream, heat the olive oil and saute the chiles until soft. Put into a blender and add the cream, lemon juice, and a pinch of salt. Blend briefly until broken down. Add a little water to thin it out (it should be able to float on the soup but not be in thick blobs).  Check the seasoning, and add the tiniest pinch of sugar (to taste).