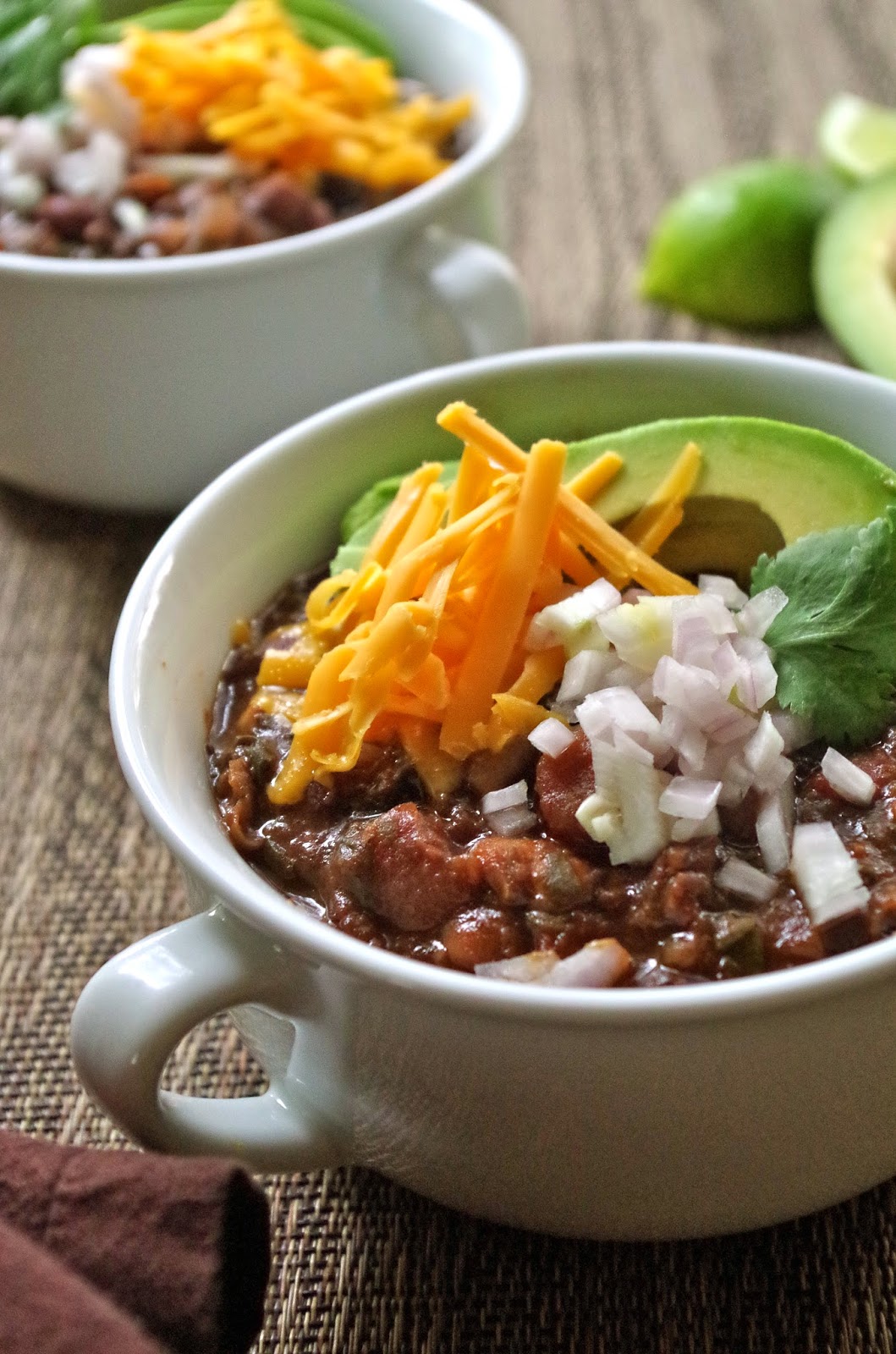 What a week! I am currently on spring break (and have a trip to the beach and a hike in the hills planned for later in the week), a dear friend of mine is getting married this weekend, I am reading multiple books (yes, at once, and yes, it is hard to keep track of everything), I have been sleeping in and going for runs when I finally awake, and it has already rained twice this break.

One way to celebrate all this good fortune is to settle in with the husband and watch some sporting events with a big bowl of chili loaded with cheese, onions, cilantro, lime, and avocado. The husband has been especially busy as of late, given that on top of his regularly scheduled employment he has been co-teaching a class for three hours every evening for the past ten days. Thus, it felt quite pleasant to settle in with him on the couch to flip back and forth between the NCAA championships and the Giants season opener (against the Diamondbacks), even if he arrived home at the second half of the basketball game and a few innings into the baseball game.  While Duke won (which the husband has taught me that as a transplanted-and-late-in-life Kansas fan I must bemoan), so did the Giants; the night was not all lost, and it was still fun to sit with him, two weird cats, and a bowl of chili. 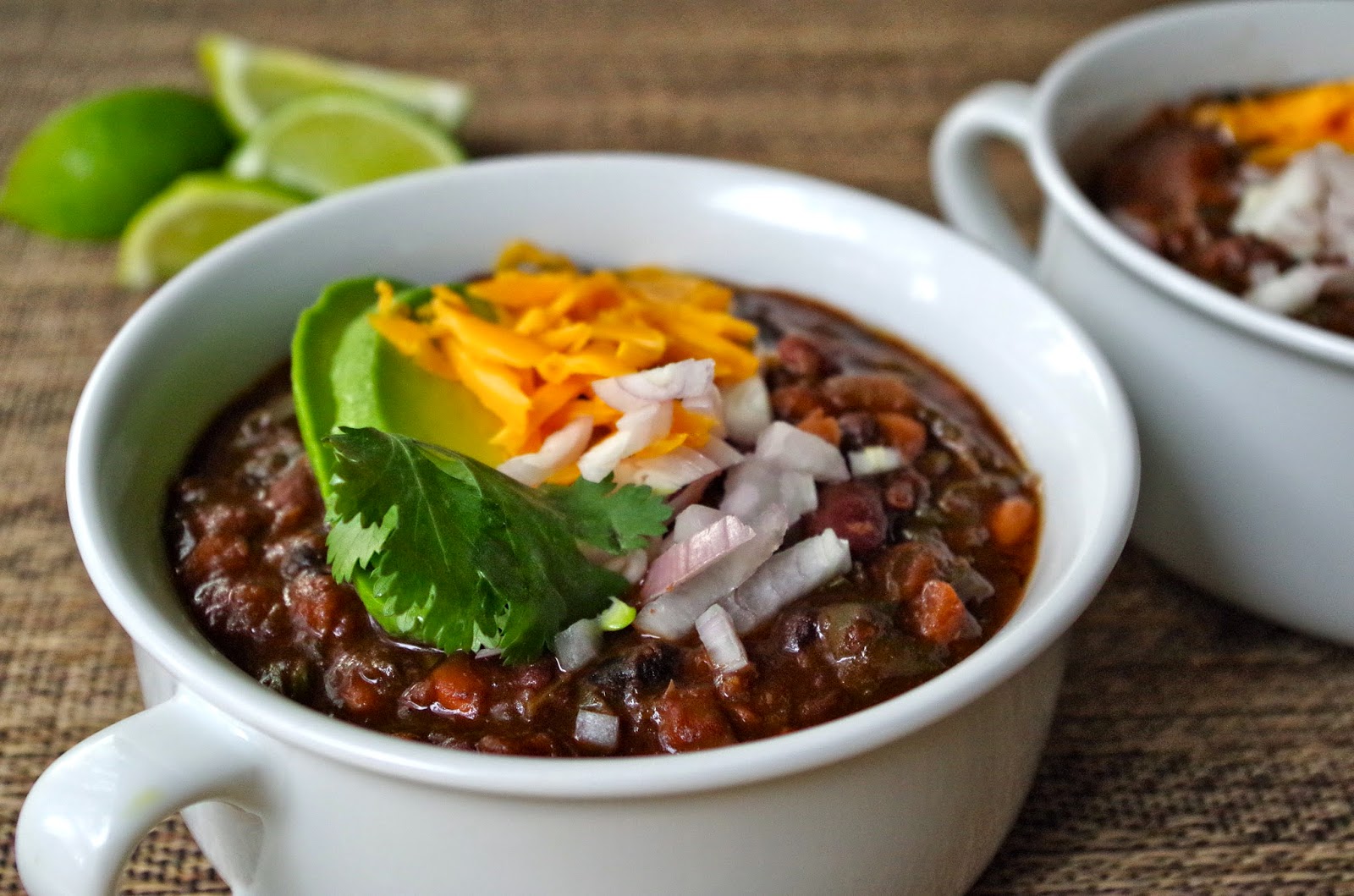 What makes this chili so spectacular is the way that Anna Thomas, our cookbook's author and the woman known as the Vegetarian Epicure, extracts the chili flavor. Instead of using dried chili powder that is (lord knows how old) in the back of your spice drawer, she recommends soaking dried chiles in boiling water for 40 minutes, pureeing them, and them pushing them through a fine-mesh sieve. The resulting chile paste is bright and smoky and strong all at once. The husband likes meat in his chili (although he did not graduate from my father-in-law's chili school that espouses all meat and no beans); however, he liked the chile-forward taste of this vegetarian version so much, even he declared this chili a success. I thought so, too. 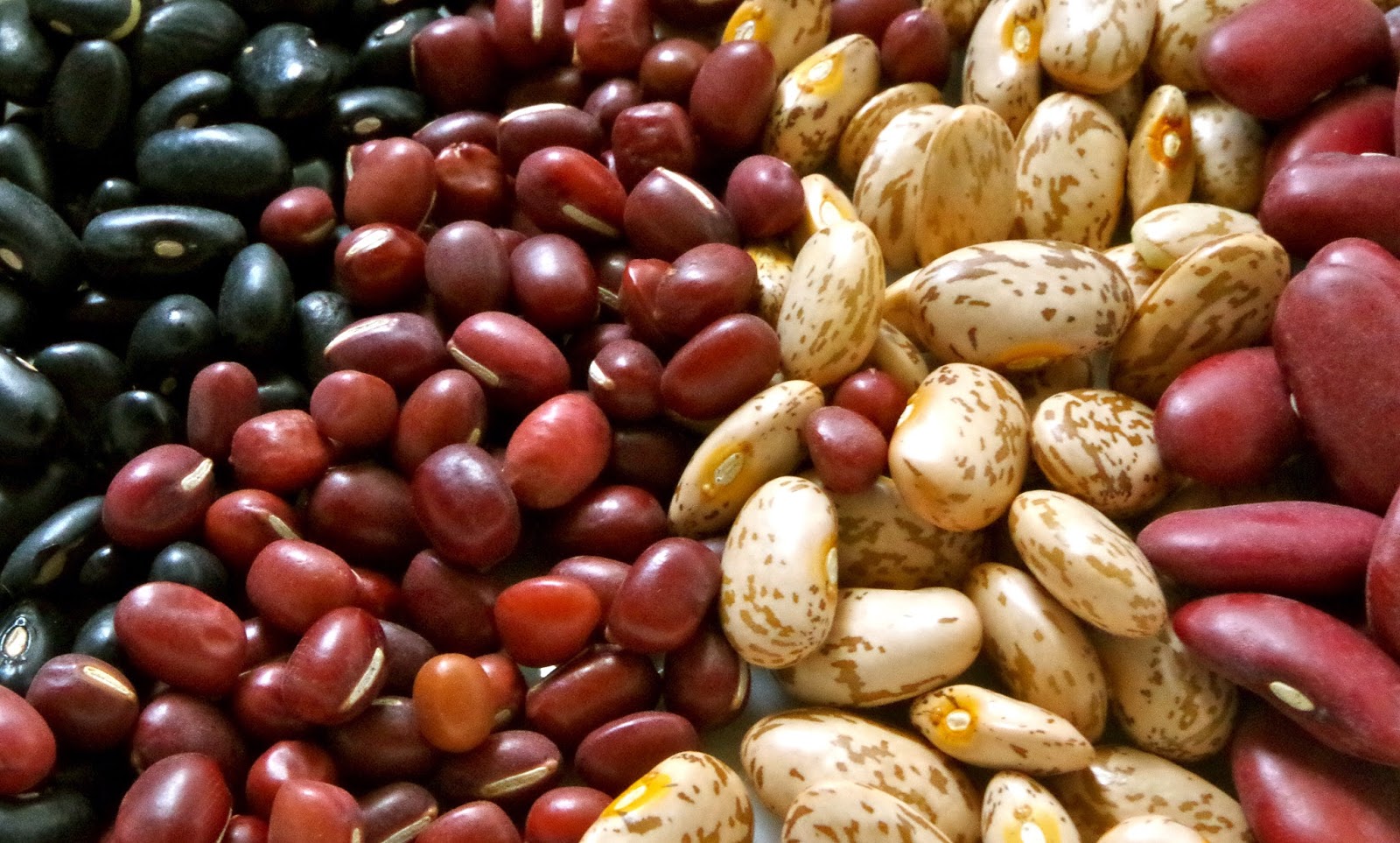 I'll admit that this is really a four-bean chili and not the advertised three-bean fare, but only because when I was bagging up bulk beans at the grocery, these adzuki beans were staring at me with all of their little red bean cuteness. I had to snap them up. These are the beans traditionally cooked with water and sugar to make red bean paste.  However, without the sugar, they are simply a firm bean with a deep red, almost black, color when cooked. I substituted them for 1/2 of the kidney beans, which I always find a little strong, and it turns out kidney beans can be toxic. Apparently, red (and white) kidney beans have a toxin (phytohemagglutinin, for the curious) that can induce vomiting should you not cook the dried beans properly (canned beans have been cooked thoroughly, so no worries there). You need to boil these beans for a full 30 minutes to fully get rid of the toxin (although they may take up to 90 minutes to two hours at a simmer to be fully softened).  Duly noted. 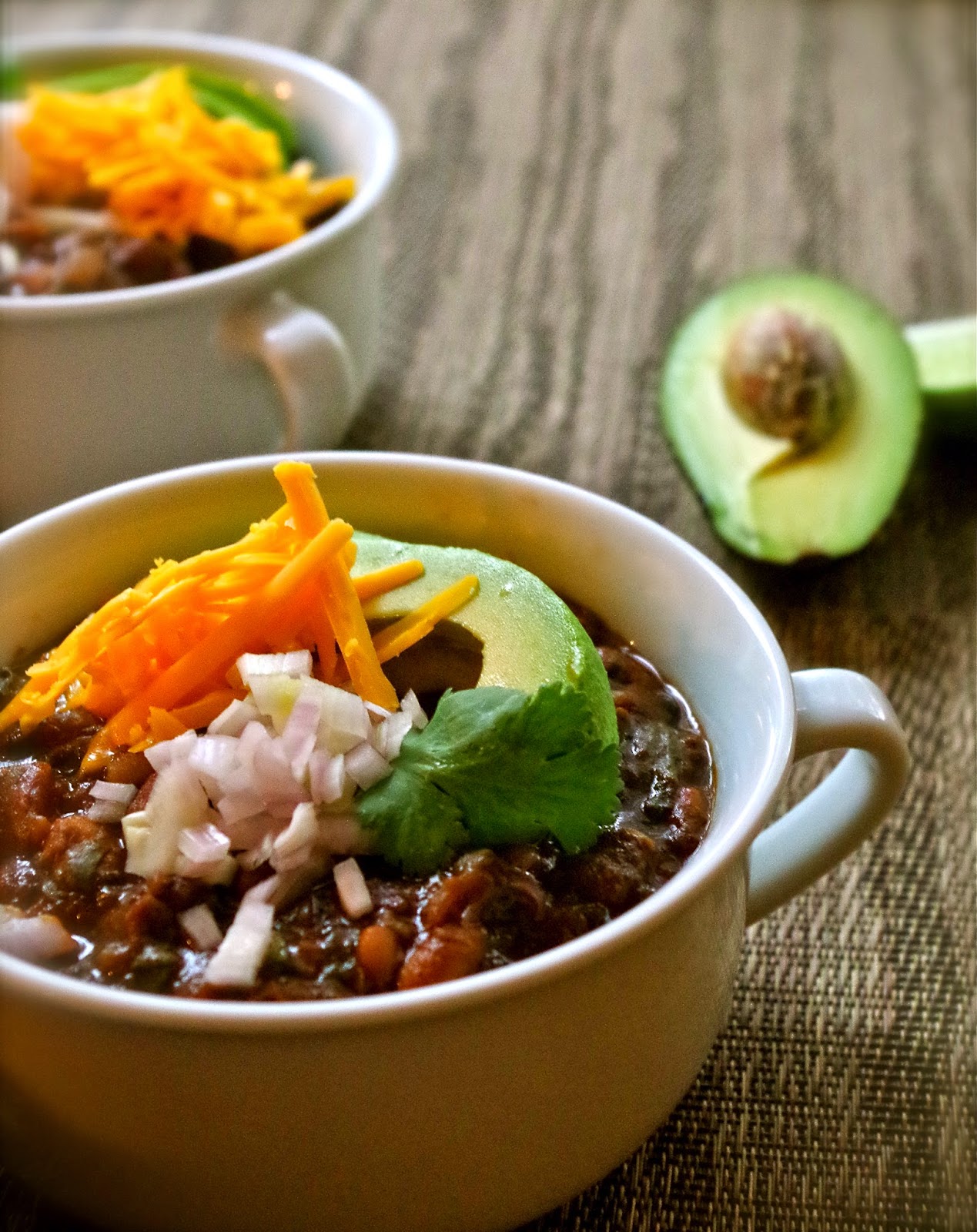 I'll also admit that I don't like garbanzo beans, which are the Anna-Thomas-recommended legume, in my chili. Thus, I swapped the cup of garbanzo beans for a cup of black beans, which I like immeasurably more (in a chili. Not necessarily in general). I particularly like the subtle sweetness of black beans and their soft texture, especially next to the firmer kidney beans. Finally, on the bean-related front, pinto beans are the most popular bean in America, in part because they are the bean of choice for refried beans. Dried, they have that pretty mottled skin (hence pinto), but they lose it when cooked.  Like kidney beans, these legumes need a longer cooking time, sometimes up to two hours as well.  However, mine cooked in a flash and were the first beans done. 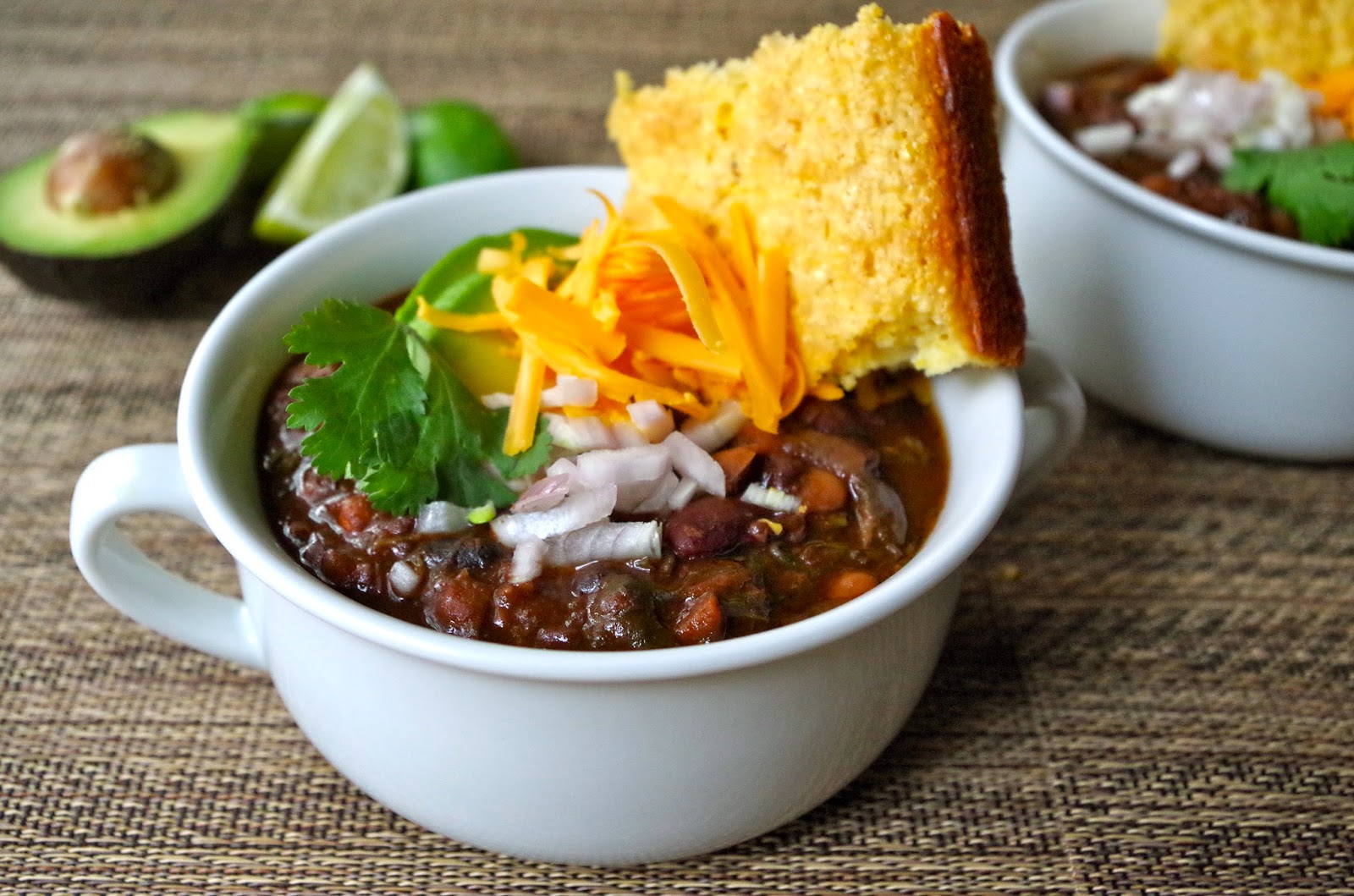 Of course, beans cause flatulence, in part because they contain so much fiber, not often found in abundance in the American diet. It turns out that epazote, that pungent leaf often used in Mexican cooking, is a carminative. (How's that for a new vocabulary word?  Carminative: an agent that prevents or relieves flatulence.) If you can procure some, do so, because it also has a distinctive taste not replicated, really, by any other herb. If you cannot find some, don't worry; just add a little more oregano. 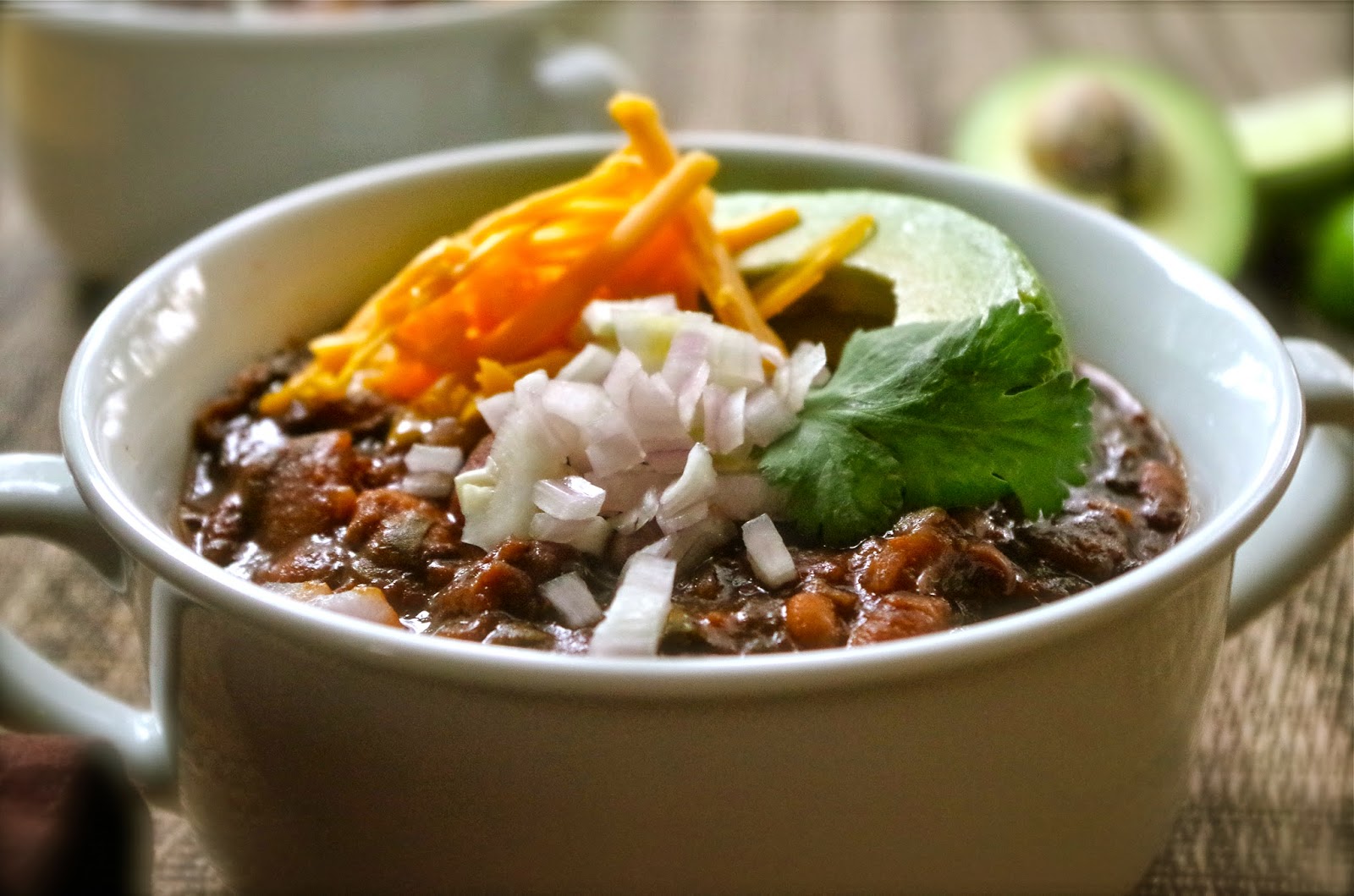 Finally, let's enter into some contentious territory--whether or not you should soak your beans.  Anna Thomas and The LA Times agree:  don't do it. That said, for a shorter (unattended) cooking time, the bean soak is recommended. However, for this recipe, I recommend setting aside most of the day (to be spent grading, doing laundry, or just general lounging), and just cooking that batch of chili for many hours on the stovetop. I think my end time was about 4 hours on a bare simmer once I got everything in.

Which was just enough time to sit at the kitchen table and grade some papers (not exactly the desired spring-break activity, but a necessary one) and then move to the couch to read my book club book. A perfect afternoon in preparation for an evening opening up the summer with baseball and saying goodbye to the winter with basketball. 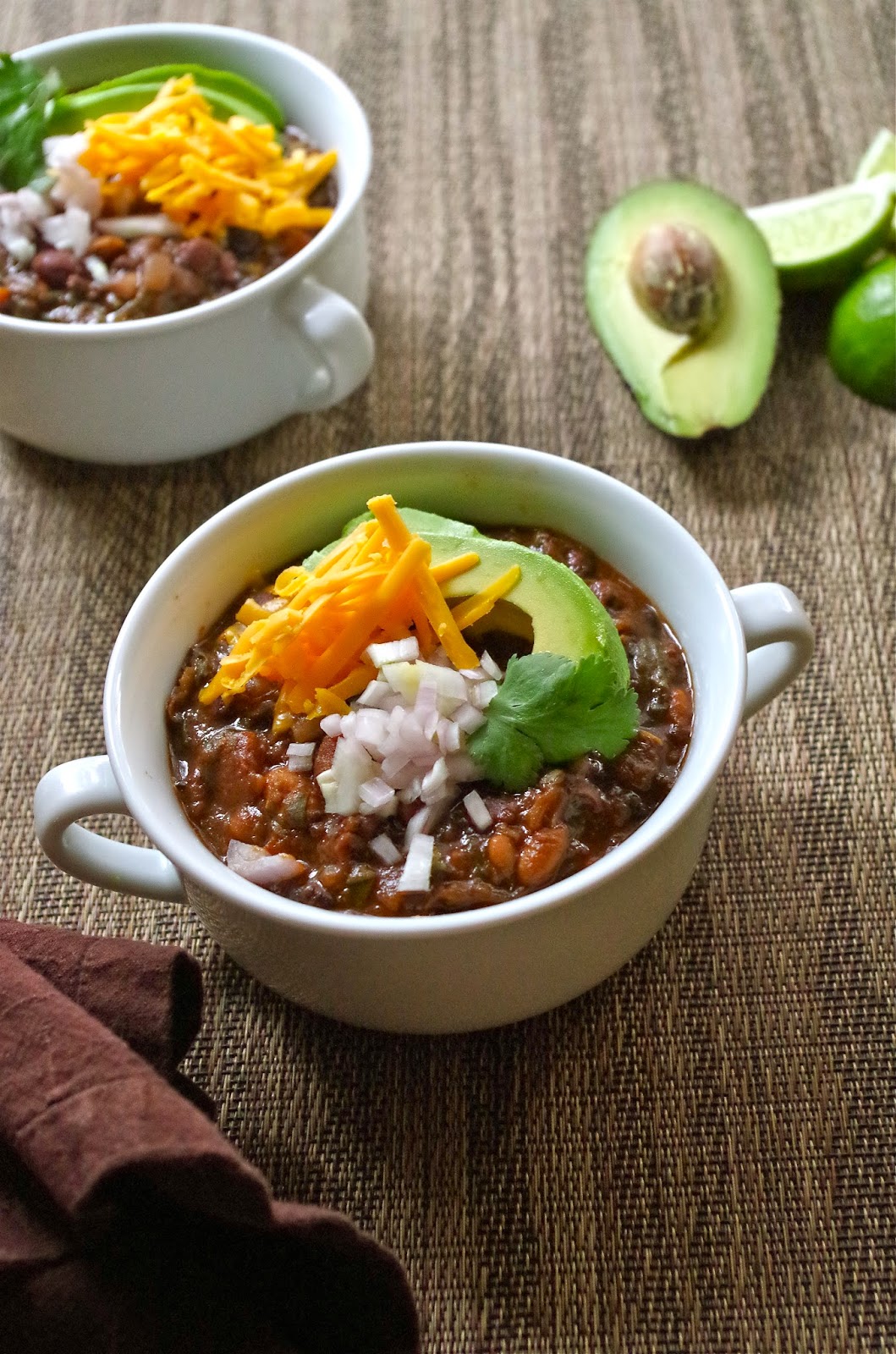 
*Notes:  I substituted 1/2 adzuki beans for 1/2 of the kidney beans, black beans for garbanzo beans, and 3 1/4 tsp powdered cumin for the cumin seeds. I also used 2 bunches of chard.

Instructions:
1.  Use 4 cups water for each cup of beans and add a third of the epazote leaves to each pot.  Bring the water to a boil, then lower the heat, cover the pots, and leave the beans to simmer gently for about an hour to two hours.*  Taste a bean of each type, and cook longer if needed.  Cooing time depends on the age of the beans, and you might need another 20-30 minutes for a particular type of bean, depending on its freshness.  The beans should be tender to the bite with no crunch left, but should not be mushy.  Add 3/4 teaspoon salt to each pot of beans and allow them to simmer another 5 minutes, then turn off the heat.

*Note:  Thomas does not soak her beans overnight, leading to possible longer cooking times. You can always soak the beans overnight, which will shorten the cooking time, but will also make then beans a little more mushy (which I never find to be too much of a problem with chili).

2.  While the beans are cooking, prepare the chile puree.  Rinse the chile pods and put them in a small saucepan with 2 1/2 cups water.  Bring the water to a boil, then turn off the heat, cover the saucepan, and leave the chiles to soak and soften for 40 minutes.  If the water does not completely cover the chiles, turn them over after the first 20 minutes.

4.  Heat the olive oil in a large saute pan (at last 5-quart), and cook the chopped onions in it over medium-high heat for a few minutes, until they begin to soften.  Add a pinch of salt and saute over medium-low heat, stirring now and then, until the onions are coloring, about 15 minutes. Add the chopped garlic, diced carrots, and red bell pepper and saute another 10 minutes.

5.  Meanwhile, remove the stems from the chard, cut the greens into 2-inch pieces and set aside. Toast the cumin seeds in a dry pan over medium heat for a few minutes, just until the seeds release their fragrance, then grind them in a mortar or a spice grinder.  Add the cumin and the oregano to the sauteed vegetables, stir for a minute, then add the tomatoes, all the beans with their liquid and half a cup of the chile puree.

6.  Stir and taste. Add more of the chile puree, a little at a time, to taste. The strength of the chile puree will vary depending on the age of the dried chiles. (I used all of the paste, but I like a strong chile flavor). Remember that the chile flavor is more forward when the puree has just been added; it will mellow as it blends with the other ingredients.

7.  Turn the heat to low, cover the pan, and just check it a couple times over the next hour to be sure it's not getting dry.  Halfway through the hour, add the chard and cilantro and taste for salt and for heat. Then you can leave the chili on a low simmer until ready to serve.

8.  Serve the chile in ample bowls with garnishes (cheese, cilantro, avocado, lime, chopped onion).  The chile gets better over the next 2-3 days if kept in the refrigerator, well covered.  It also freezes well.  (Also, very tasty with cornbread.)
at 1:03:00 PM