Marinated Mushrooms with Vermouth and Garlic from The Basque Book 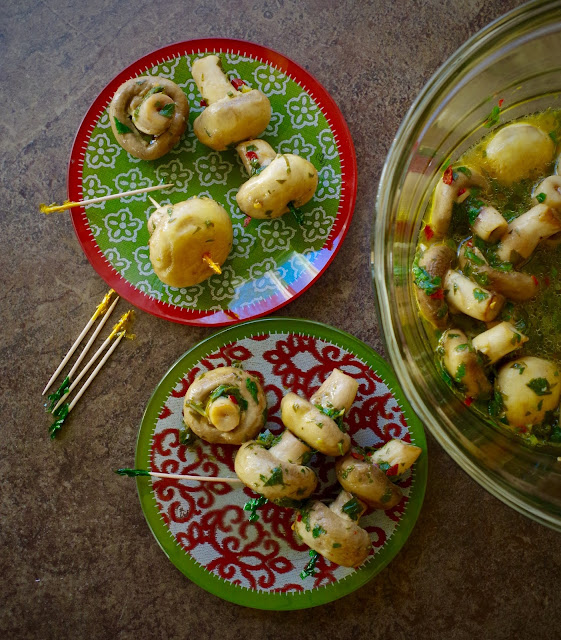 It is a miracle, my friends, that I am still standing. Finishing out a school year is hard work. But standing I am. 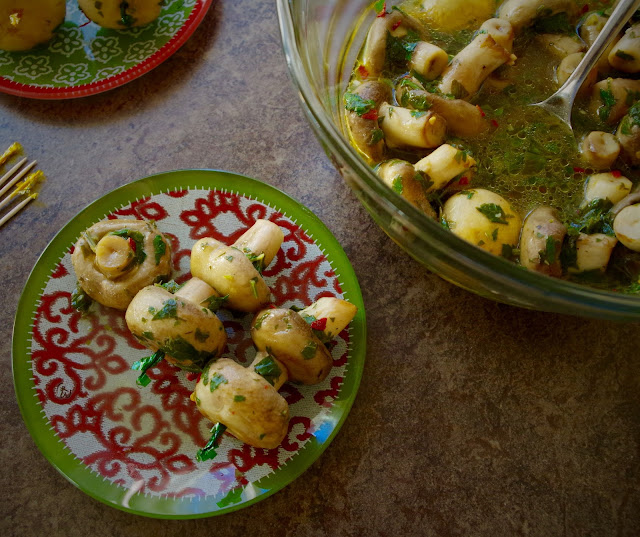 In an abrupt transition, let's just say I am big fan of Basque Country, if only because of Ernest Hemingway. When I was in college, I took a literary criticism course with a reading list of precisely one book:  The Sun Also Rises, which for years I knew of as Fiesta, the title under which this book is published in Europe. We read and wrote about this book under a feminist lens, a Marxist viewpoint, a Formalist approach, a Structuralist lens, and a Psychoanalytic approach. People, I know this book really well. 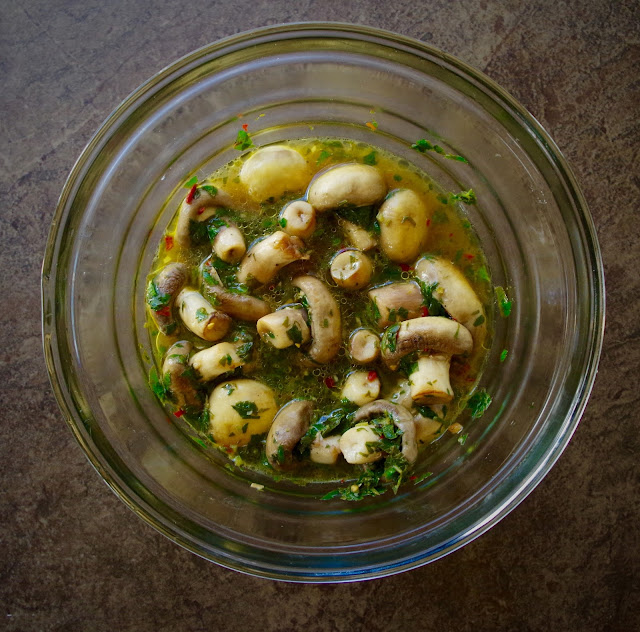 And in this book, Jake and his buddy Bill do some fishing in a little town, Burguete in the Navarre region of Spain, on the Irati River. But on their way, they ride in a crowded bus filled with Basque people. Jake, Bill, and these strangers pass around and share their wine, and Jake learns the proper way to drink wine from a wineskin. The fishing trip becomes a kind of communion for these two competitive men who have often been surrounded by the moral wasteland of 1920s Paris. And late in the book, Jake travels to San Sebastian, a town firmly ensconced in Basque Country. There, he intends to try to recreate the more contemplative, reflective space of Burguete--he wants nothing more than to swim in the ocean, the place where "it felt as though you could never sink." However, he is ripped away by desperate telegrams from the woman he cannot be with--Brett Ashley. Oh Basque Country, you are communal sharing. You are purifying waters. You are a place where one can never sink. 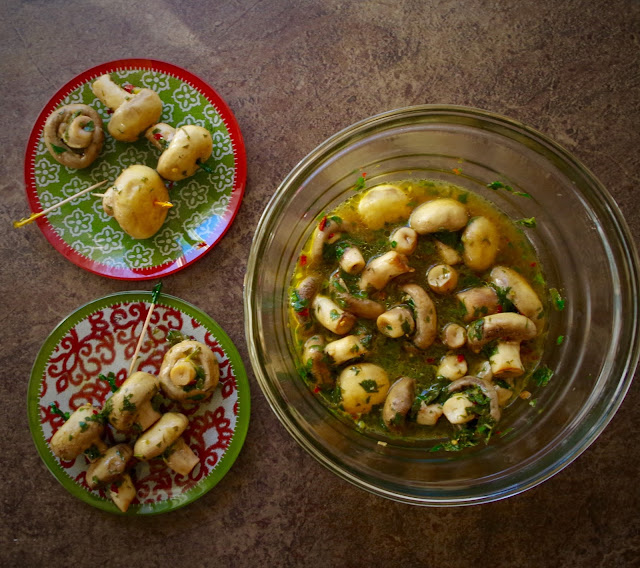 I have never been to Basque Country, nor have I ever been to Spain itself, but oh how Hemingway made me want to do so.  And oh how this new cookbook, The Basque Book, from Alexandra Raij with Eder Montero makes me want to eat the cuisine even more. 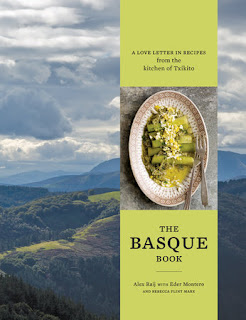 Raij and Montero are restaurant owner of and chef at Txikito in New York, and oh, their food is good. Simple, but not easy, the food in this book does take a commitment and, Raij argues in her introduction, a sense of respect. From Poached Monkfish with Garlic Soup to Gratin of Deviled Crab, these are restaurant-quality meals. So set aside some time. 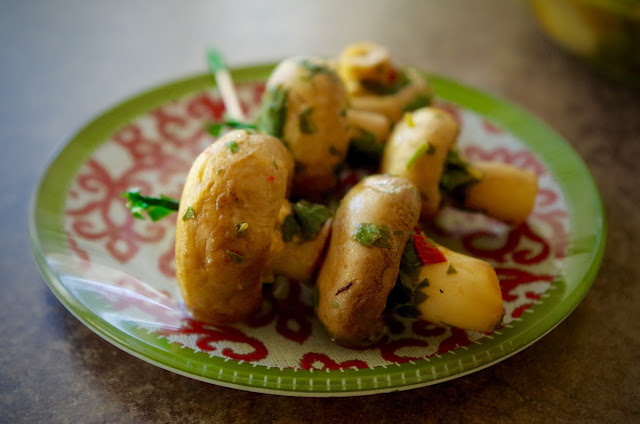 I chose one of the simplest recipes in the book as an inaugural dish--the Marinated Mushrooms with Vermouth and Garlic. Snappy to make, they can be popped into your mouth right away (or at least once they're cool), but they are even better a day or two later. And even better than that: slice them up and throw them into a tossed salad. These little flavor bombs do just the trick in an otherwise standard salad. 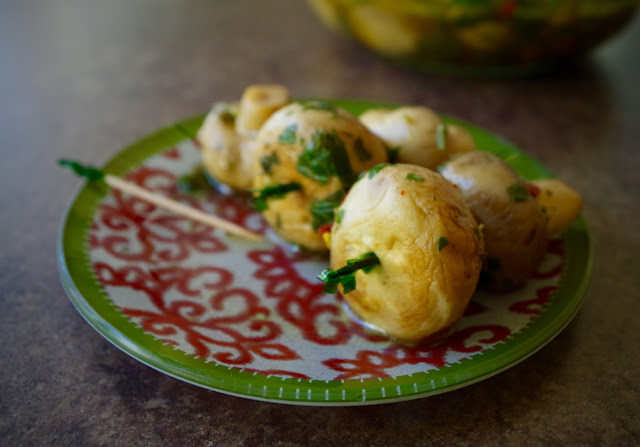 Oh, Hemingway, Raij, and Montero--stop making me want to go to the Basque Region. Stop it right now. 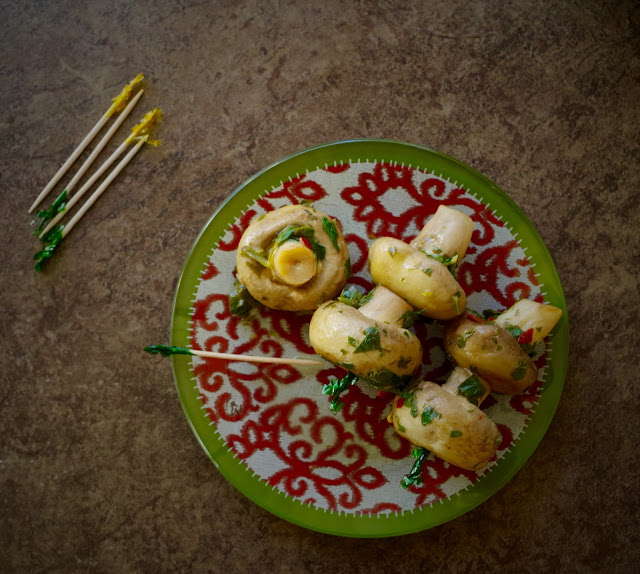 Marinated Mushrooms with Vermouth and Garlic
Adapted from The Basque Book

Instructions:
1. In a large saucepan, warm the garlic and oil over medium heat for about 30 seconds. Be careful not to burn the garlic. Add the mushrooms and 1 tsp salt. Cook, stirring often, for about 5 minutes, until the mushrooms begin to release their juices and shrink just a little. Add the pepper flakes and parsley, and cook for about 2 minutes longer. Add the vermouth and deglaze the pan, stirring to dislodge any browned bit. Cook for about 6 more minutes, until the remaining liquid has a syrupy consistency.

2.  Remove from the heat, add a pinch of salt, and stir in the lemon juice. Transfer the mushrooms and their liquid to a dish, let cool, cover, and refrigerate for at least 1 hour.

3.  Thread the mushrooms on bamboo skewers, arrange on a platter, pour the liquid from the dish over the mushrooms, and serve.
Blogging for Books Garlic Lemon Mushrooms The Basque Book Vermouth