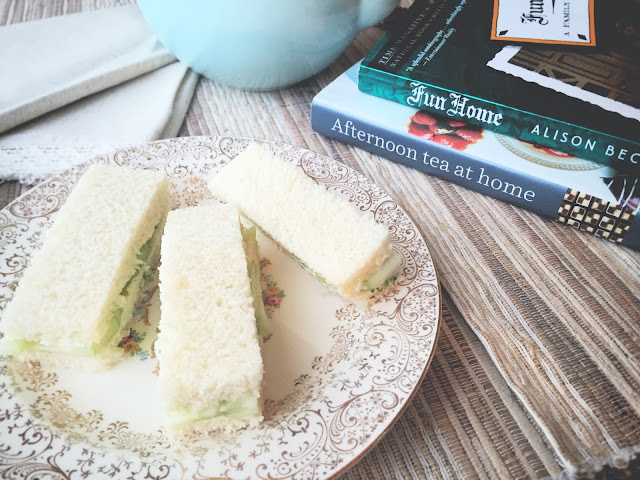 In this Cook Your Books series, I have chosen 15 books to read in 2017 based on somewhat arbitrarily chosen categories. My theory (bogus it might turn out to be) is that all 15 of these books will somehow connect to food. And I plan to write about that food (in very long posts, apparently). This third installment is a graphic novel.

Three books in and my theory was almost debunked.

But then, there it was. Glaring. Obvious--Sunbeam bread. 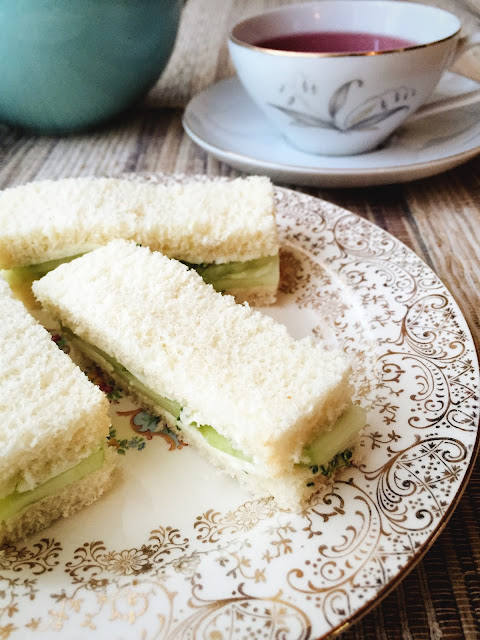 Fun Home tells the story of a young Alison who comes out to her parents four months before her father is hit by a Sunbeam bread truck--in an apparent but ambiguous suicide. She tries to make sense of her relationship with her parents, particularly her father, as she comes to understand her own sexuality and that of her father's, who spent the last 20 years of his adult life engaged in affairs with young men while still married to her mother.

Let's go back to that apparent suicide, the moment that Alison keeps coming back to herself. Emblazoned across the semi truck: Sunbeam bread.

How could I miss it? How could I overlook all of that cherubic innocence of a ringlet-laden girl as she bites into a slice of bread?  Even according to Sunbeam's own website, "No other bread brand in America has the personality and appeal of Little Miss Sunbeam. For more than 60 years, the image of this sweet girl has been synonymous with fresh, quality baked foods."

And I started looking more closely. The bread is everywhere in the book. 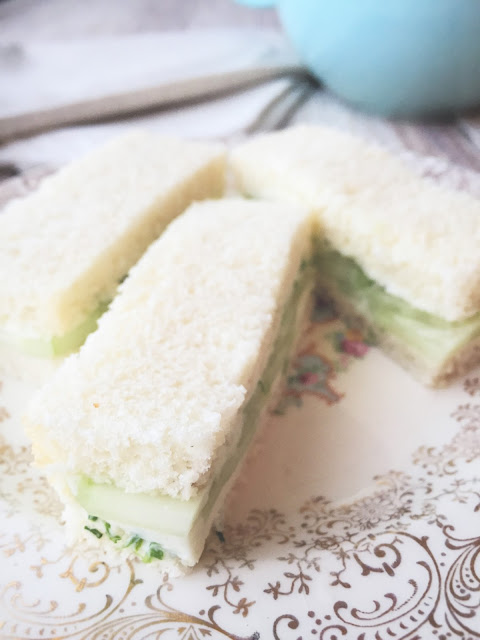 Let's dig a little deeper, shall we?

Most clearly, Bechdel connects the Sunbeam bread to her father. Of course, this most obvious connection to Sunbeam is when we see the logo front and center on a truck bearing down on her father (59.3). In reality, her father is, indeed, hit by a Sunbeam truck. However, in the book, what we see in this panel is not his death. We see a fantasy alternative for her father, where Bechdel imagines him being just missed by the truck. He is oblivious as it speeds by, and Little Miss Sunbeam looms. Innocence--or at least this commercialized and commodified version of it--keeps powering on by, as her father continues his life.

But that's not really how it happened. Instead, he was hit by that Sunbeam bread truck. Innocence comes to a full stop for Alison. In an interview with The Comics Journal, Bechdel says of Sunbeam: "So its cheesy, sunny logo stands in as a sort of ironic memento mori."

This memento mori is one not only of her father's death but that of innocence. Throughout the book, bread juxtaposes the fixed innocence of the Sunbeam girl and a growing understanding of sex, sexuality, and secrecy for a young Alison. The Sunbeam bread suggests a kind of innocence that can be pinned down in a moment. However, despite the desire to pin it down, that innocence is fleeting and mutating.

And that mutation is not always to disastrous effects, for Little Miss Sunbeam is the ideal young American girl of stereotypical femininity that Alison so strongly bucks against. 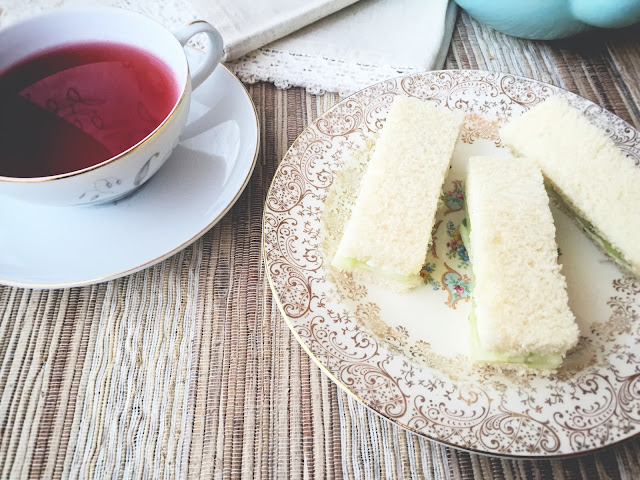 Let's take a moment just to detail all the moments Sunbeam shows up in the book:

All of these add up to some elusive, gendered and sometimes sexualized innocence, if only for a moment, that she wants her father to make space for but fails at time and again. And so she becomes as trapped by this image of innocence as much as she wants to hold onto this innocence. 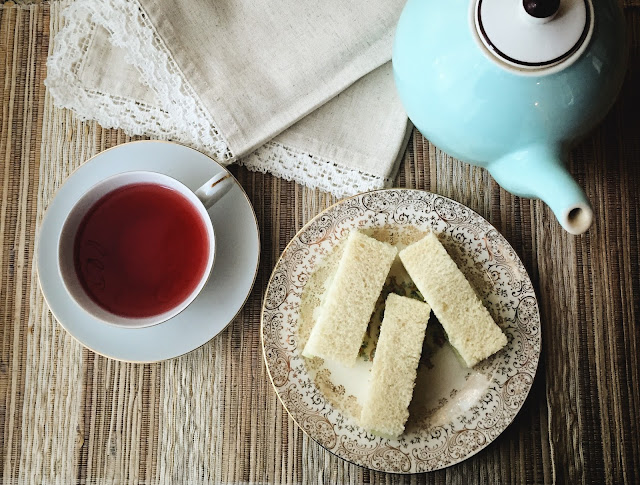 Not all of the Sunbeam bread is connected to Alison's father, however. Twice it moves to her mother.
Damnit, Sunbeam.  You're everywhere in this book, and you refuse to be pinned down.

So there it is, all wrapped up in her parents and their sexuality and independence, in her fantasy of innocence powering on without the death of her father, and her own growing understanding of her own sexuality and gender expression.

Bread and innocence, or a desperate desire for this bought-and-sold version of it, firmly fixated in the book. 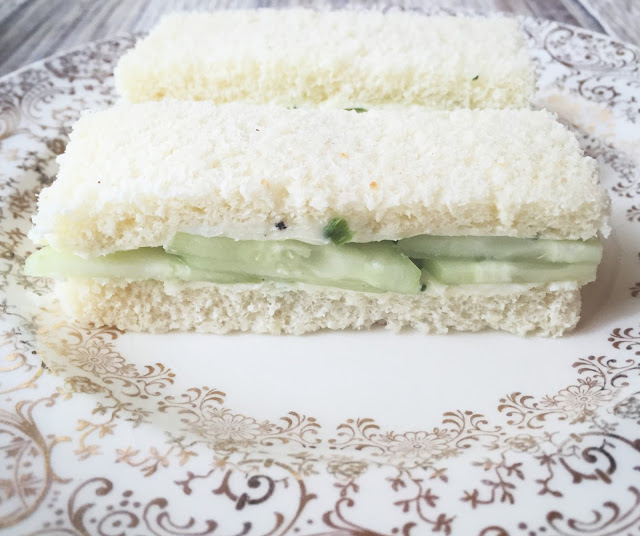 Now, you're probably wondering how I am going to make the leap from Sunbeam bread to cucumber sandwiches. Here we go:

The summer Alison turned 13, her mother played Lady Bracknell (Aunt Augusta) in a local production of Oscar Wilde's The Importance of Being Earnest.

In the play, Algernon wolfs down cucumber sandwiches that were intended for Lady Bracknell. When another character, Jack, is left to eat only bread and butter, Jack too eats as if he "were already married to" Algernon's cousin Gwendolyn. Already, food becomes connected to consumption, this time sexual consumption. Even Bechdel writes of these sandwiches as such: "desire is encoded as one of the character's uncontrollable gluttony" (166.4). Algernon is a man with a considerable appetite that does not always take into account the effect of this appetite on others. Wilde, himself, had to cloak his own sexuality, until he was brought to trial in 1895 for "gross indecency" with men.

In the very next panel, we learn that the Bechdel family eats cucumber sandwiches all summer long (167.1). But their father eats them faster than they can make them, reaching in to consume the sandwiches as the children spread on mayonnaise and stack cucumbers. A man with appetites. Appetites that younger Alison is ignorant of but then later sees as her connection to her father.

And this is a book that is wide reaching in its own appetites and that cannot pin down anything. It is one concerned with intertextuality, for Bechdel makes connections and comparisons to Proust, Homer, Colette, Joyce, Wilde, James, Fitzgerald, Camus, Stevens, Daedelus and Icarus. Explaining this book to someone is a tricky one because it relies on its connection to all of these other stories to be understood. Just in the same way Alison relies on her father (and her mother) and his story in order to understand her own (as perhaps we all do). Meaning and understanding in this story are slippery--for Alison the character, Bechdel the author, and for us as readers. Her father's sexuality and her connection to it, her father's death (is it or is it not a suicide?), her own relationship to her father, language itself (as she writes "I think" over and again in her diary, finally moving to a notational shorthand that obliterates her own written rendering of experience), her search for the meaning of father in the dictionary and it leads her on a circular goose chase through the word beget, and her disdain of Victorian decoration which her father used as a way to conceal one's self loathing--"He used his skillful artifice not to make things, but to make things appear to be what they were not" (16.4).

Indeed this is a book of revelation and cloaking, of glimpses of a passing innocence and a surety of experience. Of appetites and shame. Of commodification and construction of innocence. Of a refusal to be fixed in meaning or knowing or understanding.

That's a lot for white bread. 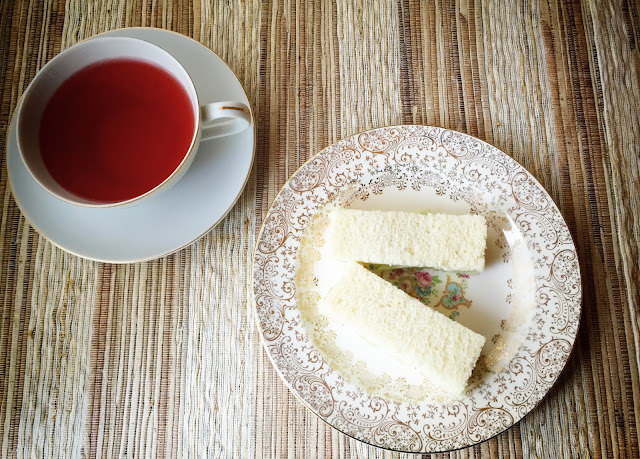 But I know. I could only choose Sunbeam bread. It seems so obvious (almost pedestrian) now, doesn't it?

So in the fashion not of Fun Home but of The Importance of Being Earnest which in turns means of Fun Home, I present to you cucumber sandwiches made with white bread (sadly, mine was not Sunbeam bread, but it was requistitely similar in pure, unadulterated commercialization of white bread). I could do it only from a properly fussy afternoon tea book by Will Torrent. Go ahead, consume a lot of these.

You might have some appetites you want to indulge under a cloak. I won't tell. 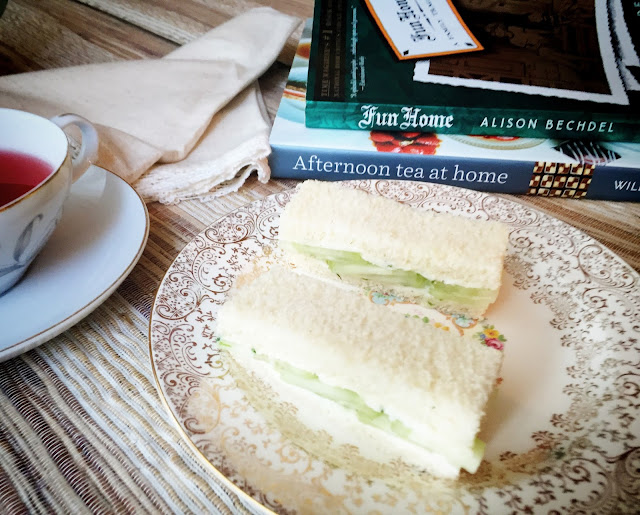 
Cucumber Sandwiches with Yuzu (or Lemon) and Chive Butter

"Mom helped the prop mistress find a recipe for cucumber sandwiches. We ate them all summer" (Fun Home 167.1).

Adapted from Will Torrent's Afternoon Tea at Home

This is a lovely little cookbook, whenever you need a fussy lunch, brunch, snack, or tea time.

Instructions
1. Beat the butter until really soft and spreadable. Gradually add the yuzu or lemon juice, mix and season with salt and black pepper. Add the chives and mix to combine.

2.  Peel the cucumber and thinly slice into rounds. Put the slices in a small bowl and add the cider vinegar and toss to coat.

3. Lay half of the bread slices on the work surface and spread with 1/2 the butter mixture.

4.  Arrange the cucumber slices on top as neatly and evenly as possible and season with salt and pepper. Spread the remaining bread with the butter mixture and press on top of the cucumber-topped bread, butter side down.

5.  Gently press the sandwiches together and trim off the crusts, using a serrated knife.

6.  Cut the sandwiches into neat rectangles or triangles to serve.